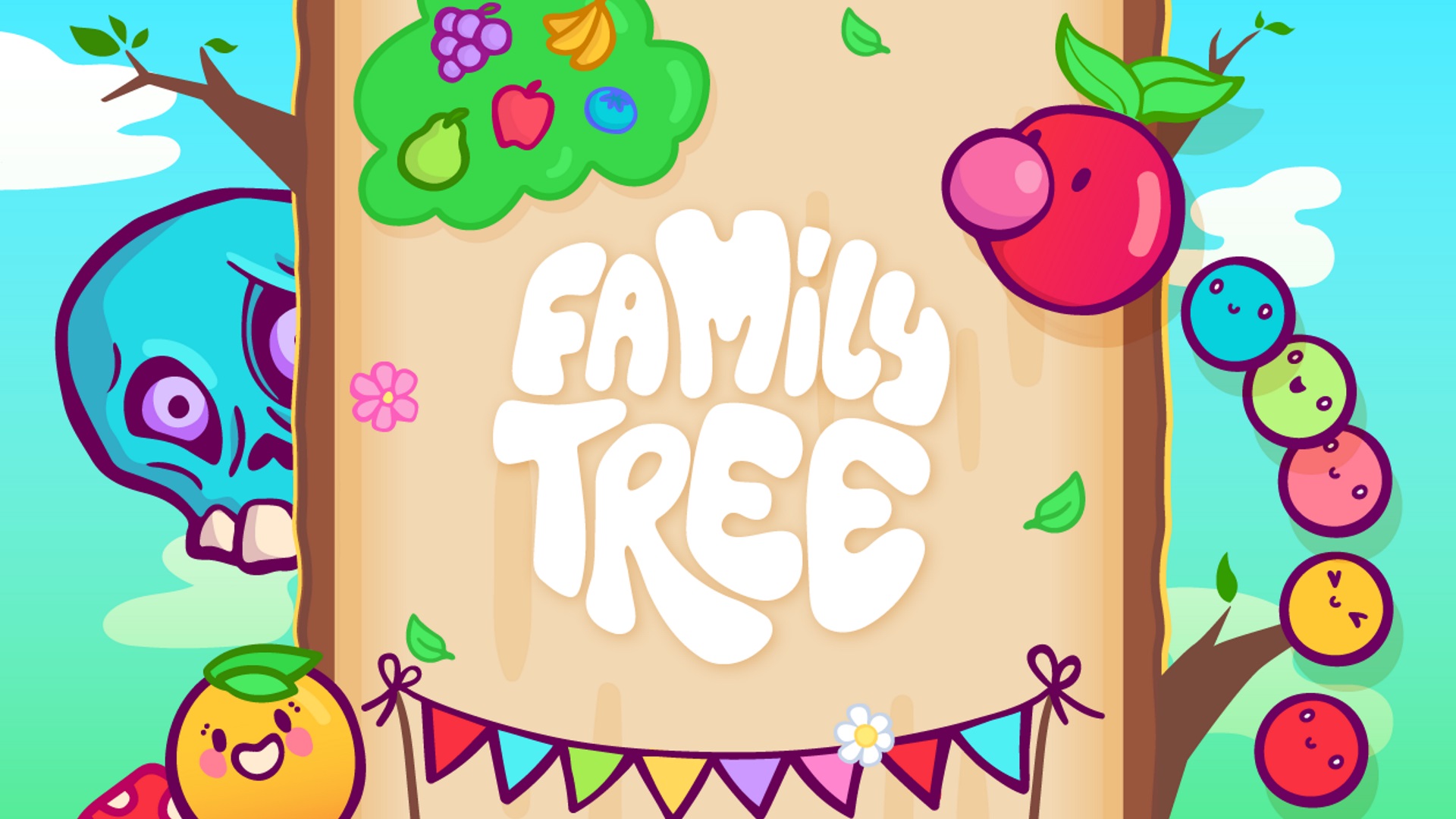 A game unlike anything else we’ve ever played, Family Tree is a multi-coloured treat for the senses. The Finger Guns Review;

A game unlike anything else we’ve ever played, Family Tree is a multi-coloured treat for the senses. The Finger Guns Review;

“Arcade Games Are Dead”. That’s what many stalwarts of the genre have professed over the past few years as they’ve moved on to pastures new. There is of course some truth to the statement. The score chasing, combo hunting days of yore certainly seem to be behind us. Thankfully, Infinite State Games – the creators of the underappreciated gems Rogue Aces and Don’t Die Mr Robot – didn’t get the memo. With Family Tree, the 2-man studio’s latest title is a refinement of their arcade formula, blending action platforming with pinball then pushing you for Perfect scores while assaulting your senses with an LSD powered kaleidoscope. It does all of this while being incredibly accessible – but it’s missing one vital ingredient.

Family Tree tells the story of Mr & Mrs Fruits, a colourful little pair (or should that be Pear?) who, unsurprisingly, are made of fruit. When their back is turned, a nefarious floating skull called Pedro arrives who turns all of Mr & Mrs Fruits’ children into real fruit and then steals them away through a portal. The elder Fruits, being the top citrus-based-parent’s that they are, set out to rescue their petite fruit salad. It’s all surface level stuff, told through a cut scene at the start of the game and barely touched on after that – but you get a hero, a villain and an overarching quest to go on. That’s all this type of game needs and it’s presented in a light hearted way which means it’s not hanging over the rest of the game.

Consisting of 128 levels (plus 32 bonus levels for good measure), separated by thematic and incremental difficulty increases based on the change of seasons as well as years, Family Tree has a tonne of content in its 1-player campaign. The aim of each level is to get from the starting position, inside the bottom of a hollow tree, to the finishing spot which is located further up while collecting as much fruit (AKA you’re captured children) as you can along the way. In order to do this, Mama or Papa Fruits can fire themselves into the air with the help of a guide line. Once they’re in the air, you get to adjust your flight with the shoulder buttons which adds some after-touch to their trajectory. When they’re on the ground, the shoulder buttons trigger a little hop in the desired direction too. Handy when you want to get your angles just right.

You’ll want this precision in Family Tree because some of the later levels can be mind blowing. There’s no difficulty curve per se – some of the later levels are just as easy as those at the start – but as you proceed through the seasons and years, new elements are added to the game play. Initially, it’s bounce pads and cannons that’ll fire you around the tree trunk. Then there’s boxes that have to be hit multiple times that block your progress, white fences that split the trunk into sections, spinning platforms to navigate and eventually portals that teleport you elsewhere. Enemies – a block that will simply stop your progress, a goofy looking owl which will charge you if you get close, Squirrels that fire their nuts at you – slowly get introduced into the level structure too. All of these elements form 128 levels that feel like structured pinball tables, each unique despite using many of the same elements. It’s amazing how hand crafted this game feels too. Some levels have a slower pace, asking you to jump from platform to platform while dealing with pesky foes while others would be at home in a Sonic Spinball game, firing you from canon to canon along a line of your fruit children. No matter what type of level it is though, they’re all very obviously designed to be fun first and foremost. It all comes together in a pure and enjoyable way.

As well as collecting your pip-squeaks, Mr/Mrs Fruits can also collect 4 coins on the way up the tree. Each one of these coins adds a multiplier to your score once you’ve reached the target area. Collect all your fruity kids as well as all 4 coins and you’ll get a “Perfect” score for both those aspects. Your score is also totted up with what remains on a timer. At the start of each level, a gauge starts to empty and is stopped when your reach the goal. If this bar completely empties however, in comes the villain Pedro who starts to patrol the screen. If he manages to touch you (or you accidentally fire yourself into him – easily done), your collected fruits are stripped away meaning you’ve got to go and collect them again. Thankfully, there’s almost always plenty of time to complete a level before the skull is summoned. Collect all the fruit in quick succession, pumping up score multipliers are you do so, collecting all the coins and hitting the goal area in quick time will grant you some monster scores.

It’s a shame then that Family Tree doesn’t have any type of leader board system. A game such as this, that puts such an emphasis on scores, is crying out for a local, friend or worldwide leaderboard for you take a stab at topping. Without leader boards, going for those Perfect scores at a rapid rate feels unnecessary and is sorely missing that one-upmanship that Arcade games like this can spur on. Infinite State probably have their reasons for not including these but I was honestly surprised when they weren’t to be found.

Even without that competitive edge though, Family Tree is a joy to play, not just because of its fluid pinball meets pogoing game play but because of the visuals and the sound effects. At times, this game is hypnotic. Collect fruit quickly and Mr Fruits becomes temporarily invulnerable, a pumping soundtrack will start, stars will start to fall all around the screen, a sun will start to dance around the periphery and the colour palette there will cycle. It’s bonkers in all the right ways. The art style, bright and clean, is balanced against a soundtrack that’ll worm its way onto your internal jukebox and jam itself on repeat for a few hours after you’ve stopped playing. My only gripe here, and it’s a tiny one, is that occasionally the background and environment being so vivid can make some of the collectable fruits a little hard to see.

It’s important to mention that Family Tree is incredibly accessible. You can’t fail any of the main missions in the single player campaign which means that even if you’re not trying to score big, you can still get something out of it. There are progress gates in the form of bonus levels, testing you to outrun Pedro in a race to the right but these are all relatively simple too. For the competitive out there, there’s a list of challenges you can take a run at too – like getting X number of Perfect scores or picking up all the fruit that the pesky Pedro strips away from you if he catches you. These are totally optional but worth mentioning nonetheless.

If you’ve got friends or family to play with locally, this title has an endless mode that can be played in multiplayer too. Set out on floating islands which expand ever upwards, the idea is to outpace a rising tide while collecting fruit along the way. This mode includes all the usual mechanics from the single player but throws in timed power-up’s too like Attract which will suck in fruit from nearby and a sticky mode that’ll allow you to attach to the bottom of platforms. This mode is enjoyable but it doesn’t feel anywhere near as purpose built or as charismatic as the main game proper.

The absence of leader board functionality aside, Family Tree is a unique and truly enjoyable game. Combining Arcade sensibilities with pinball propulsion and visual effects that are mesmerising, it’s a real treat. It’s the product of developers that have found a really cool core game play loop, nailed that down to perfection then built around it with a tonne of content that’ll keep you busy for hours, no matter your skill level.

Another triumph for Infinite State Games as they prove there’s life in Arcade games yet.

Family Tree launches on the Nintendo Switch on the 10th of October, 2019.

No More Robots Reveal RPG Soccer Story, Coming This Year
Space Marine 2: What We Know So Far...
The Falconeer (Xbox One) Review - Earn Your Wings