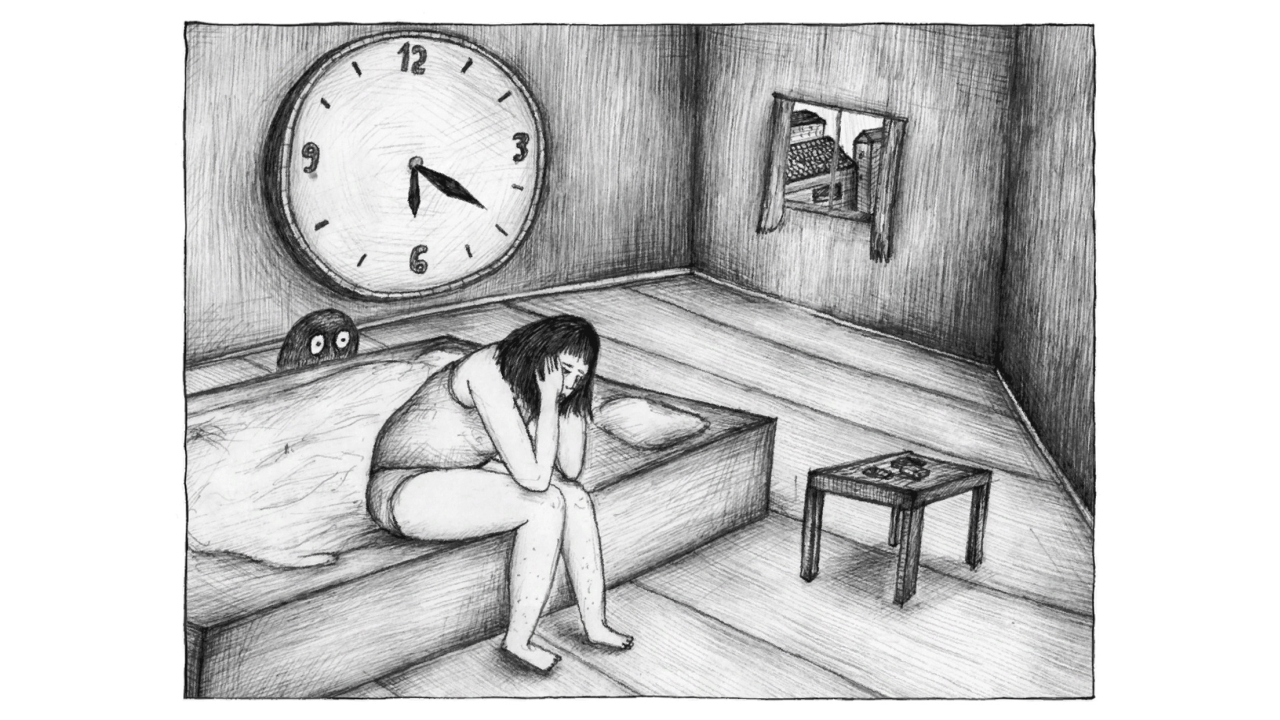 It has been more than a year since I first played Stilstand but it is a game that has stuck with me. It might only be an hour long but the darkly funny yet painfully frank take on mental health has stuck with me. So much so that when the game released on PlayStation 4, I bought and played it again. Now I find myself playing the Nintendo Switch version. It’s rare that I’ve ever played a game three times in my life time. I can only think of Monkey Island, Sonic 2 and Skyrim that I’ve ever played more times than this. It’s such a digestible game, easily fitting into an evening, that it has been a joy each and every time I’ve played it. For those that can relate to the protagonist’s plight though, there’s every chance that Stilstand will stick with you, long after it has ended.

Stilstand takes place during a gruelling, sweaty summer in Copenhagen. The unnamed protagonist of the game, a young woman, finds her life meandering. Locked in a hopeless cycle of mundanity, she’s watching crap TV, smoking and playing with her phone as she attempts to weather the heat in front of her fan. She’s not along though. She’s sharing her apartment with a monster that only she can see. This monster is a foil to her isolation, encouraging her to get out of the rut she finds herself in.

What unfolds over the hour long, three chapter journey in Stilstand is a candid portray of the mental health struggles of a lost soul. The battle with loneliness and the internal fight against the safety it can offer. The disappointment when setting high expectations on something only for it to fall well short. That internalised drive to socialise, even when you’re not feeling it, only to find your social battery depleted at the most inopportune times. Mirroring others to feel a semblance of connection. The despair of rejection. The drunk text. Oh, the drunk text. The events that unfurl throughout Stilstand are those that I imagine most people experience in their life at one point or another making it a very relatable story. For those with borderline personality disorder, anxiety and/or depression you’ll likely see a lot of yourself reflected back from Stilstand.

Despite the relative seriousness of the subject matter, Stilstand presents this content in a light hearted and smile inducing way. There’s an element of whimsy and irreverence to the thought process that the protagonist and her monster go through. For example, when getting dressed for a date, there’s a hilarious take on a dressing room scene with some really funny but extreme outfits. It doesn’t make light of any of the situations the protagonist finds herself in, but portrays them as if through a fun house mirror.

Me, Myself & My Monster

This is all staged in quite a unique way. In the broadest possible terms, Stilstand is a visual novel. It’s a little more than that though. Akin to a comic book with pop up elements, the game represents certain story beats as mini-games contained within their own panes. Some scenes will require you to interact with something in order to move the narrative forward. In one scene, you’ll have to collect symbols as a car drives along a road below, for example. Others can just be clicked through like a traditional visual novel.

The art style employed in Stilstand is also unique. Like a hand drawn, pen and paper art style where you can see the shape of each pen stroke, it’s beautiful in a non-traditional sense. For a game that explores some of the ugly sides of life, it’s quite apt that the art style is a little rough around the edges too.

Each time I’ve played Stilstand, I’ve noticed some new little details too. There’s some really smart minutia here that helps build up a really lived in and relatable experience. Like biting your nails when you’re anxious, or playing with perspective of a room to make it fell bigger when it’s empty. There’s a tonne of subtle little artistic touches that make this game a really worthwhile experience.

Stilstand was a technically proficient game on PC when I played it last year. Played with a mouse and cursor, it felt natural. On PS4, played with a controller, it felt a little clunkier. Having to move a cursor with the thumb stick in order to then move parts of the pan drawn art is functional, but far less intuitive than using a mouse. I worried that the Switch port would be the same. Thankfully, the Nakana.io and Niila Games have added touch screen support for the Switch version. You can still move the cursor with the thumb sticks if you wish, but tapping and dragging on the handheld’s touch screen is undoubtedly the best way to play this game.

None of the content has changed in the jump to consoles either. Stilstand is still the same “story of one woman’s summer long existential crisis told in a compelling and original way” that it was in 2020.

That does mean that my one and only misgiving about this game remains. There’s hope to be found in the third and final chapter of Stilstand. It’s just that it’s not anywhere near as interactive and involved as the rest of the game. Maybe that’s intentional, but it feels like the player plays a more active role in the protagonists low points and feels standoffish when there’s light on the horizon.

That said, Stilstand is still a profound, unique and worthy experience that I highly recommend. It might only be an hour long but there’s a lot packed into those 60 minuets, some of which you might miss if you only play the game once. If you’ve played the game on PC or PS4, there’s little reason to jump into the Switch version. If you’re not played Stilstand yet, I feel confident in saying that the Switch version is the definitive way to do so.

A darkly funny, emotionally engaging and poignant interactive visual novel, Stilstand is a relatable story that’s worth experiencing. With the implementation of touch screen input, the Nintendo Switch version of the game is the definitive console version of a game which I feel most people will see at least a small part of themselves in.