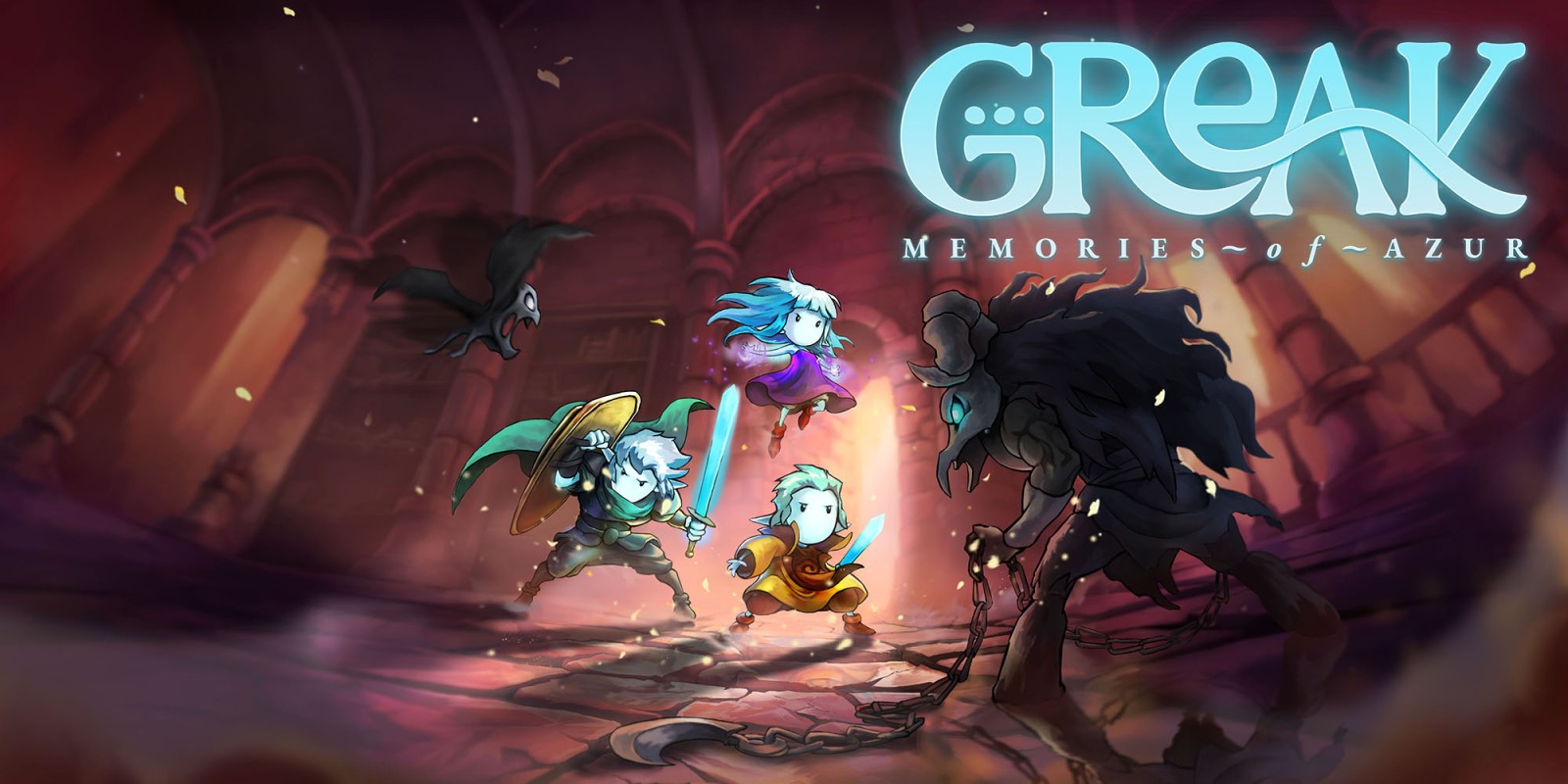 Finally releasing on last-gen consoles, Greak: Memories of Azur has some gorgeous animation. Does the gameplay stack up? The Finger Guns Review:

A charming and gorgeously animated Metroidvania-style platformer, Greak Memories of Azur has just released on PS4 and Xbox One. Greak can be plenty challenging, inspired by the recent Hollow Knight, but it’s also got the flavour of something a little older, such as Dust: An Elysian Tale. There’s plenty to love about the cute little Courine people, these three siblings and their watercolour art adventure, but beware, some gameplay design is frustratingly obtuse.

Just so you know why it’s called Greak – Greak is the name of the little hero Courine (that’s an elf to the rest of us) on all the images. They’re a strange people, the Courine, in that they don’t have noses (How do they smell? You can finish yourself off there, I think). After a short introductory tutorial that demonstrates some of the later mechanics, Greak wakes up alone in an unfamiliar village. The Urlags have invaded Couline lands and Greak has lost his sister and elder brother.

The village serves as a hub from which you’ll pick up basic fetch or kill quests to perform in the various locales beyond, or venture forth into the surrounding areas to look for your siblings. Greak joins the scout forces, learns some swordplay, looks for ropes to help build the Airship the villagers hope will spirit them away from these dangerous lands. Eventually, you learn enough, that with your sibling’s help you can access more and more areas, and reach places you previously couldn’t. In that way, it is close to being a Metroidvania, but strictly speaking it’s not about abilities you pick up, but really just the combination of all three characters and therefore the ability to complete puzzles that opens new areas.

Soon you’re on your way to a short but fun adventure, clocking in around 5+ hours (although clearly possible in 3 considering one of the trophies), looking for and then finding your siblings, then teaming up with your complementary skills to complete the adventure. It could take longer – you may, like me, spend a good chunk of your time backtracking for random items you need to progress.

I found the world of Azur quiet and a bit dull, locales all sort of blend into one another, and without any kind of map or mapping function, it’s easy to get very lost. The difficulty spike is real, and puts a harsh challenge ahead of you even finding your siblings, let alone getting to the meat of the game. There is little in the way of signposting where to go next – the developers want you to explore and stumble over the route to the next area yourself. But even the first handful of locations really lost my interest – had I not been playing it for review, I might well have given up early on.

There’s just very little reward for what you’re doing. Eventually, you meet up with the two other siblings, Adara with her levitating skills, and Raydel who can use a hookshot. The game changes a little and the emphasis falls instead on the puzzles and traversal with your now three-person team.

The gameplay was slow enough as just Greak but when the three siblings need to all be controlled together, it crawls. It’s infuriating design to have to guide each character through areas separately, one opening a generic door with a generic pressure pad, while you the player then need to guide the other two through. You can press and hold L2 to make them walk together, but most of the puzzles involve you being deliberately split up.

Moving light puzzles around, switching from character to character to get the right angle was very boring. On top of this, platforming becomes another barrier to enjoyment when two or three are involved. All three jump and move differently so if one section involves a tricky jump, odds are that one will make it and the other two fall to the ground, or their doom. You then have to take each one individually back up and make the jump with their respective timing. I simple follow mechanic, would have done wonders here, or just all having the same jump distance, like Abe and his Mudokon pals.

Combat is pretty punishing, maybe not quite as much as Hollow Knight, but firmly edging towards it. Enemies will hit you every moment you approach unless you learn their tells and timings. You can see a lot of Hollow Knight; smooth animations with little in the way of facial features, exploration without much handholding, and difficult unforgiving combat that demands your attention.

The trouble is it shows its flaws pretty quickly. It’s not as immersive or genuinely interesting as Hollow Knight – the world of Hallownest is constantly full of the weird and wonderful. Azur doesn’t really have that. You’ve seen any surprises it has in the first few screens of generic Tolkien-esque areas. Greak’s combat controls are a little unresponsive leaving you pressing buttons to wall jump or slash and finding nothing happening. Hollow Knight never had those issues. Side quests are also dull and uninteresting, finding boring items to give to villagers or to open the next area. It got to the point I just gave up bothering with them. Having to backtrack quite a lot bulked out the playtime, and though there is a fast travel function it’s expensive and because of that, virtually unusable.

The final nail in the coffin for Greak is combat with all three characters involved. While it’s hard enough to move around during the platforming sections, bringing three separately controlled characters into a boss battle is suicide. To control one you must leave the other two somewhere safe or fending for themselves with automatic cursory combat movements. Try to switch characters to get a heal or use Raydel’s shield and the others you left behind will likely die. Even one sibling going down is a game over, and I never found any revive-type items. You can’t attempt bosses without all three characters, so it’s just a recipe for dozens of deaths, because even solo the game is exceptionally challenging; with triple the characters it doesn’t become easier, it instead gets three times harder. And sin of all sins – no co-op! In a game where the central mechanic is solving puzzles and fighting as three, to not have co-op as standard, or at least an option, is mind-boggling.

Sumptuously animated, Greak Memories of Azur draws you in with its high-end artwork. However, the game is an exercise in frustration and bad design choices. A central mechanic of three characters controlled by one player with no co-op option, hinders platforming and renders combat nigh on impossible. I’m out here trying to forget Azur.

Greak: Memories Of Azur is available newly on Playstation 4, Xbox One, and previously on PlayStation 5, Xbox Series X/S, Nintendo Switch and PC via Steam.