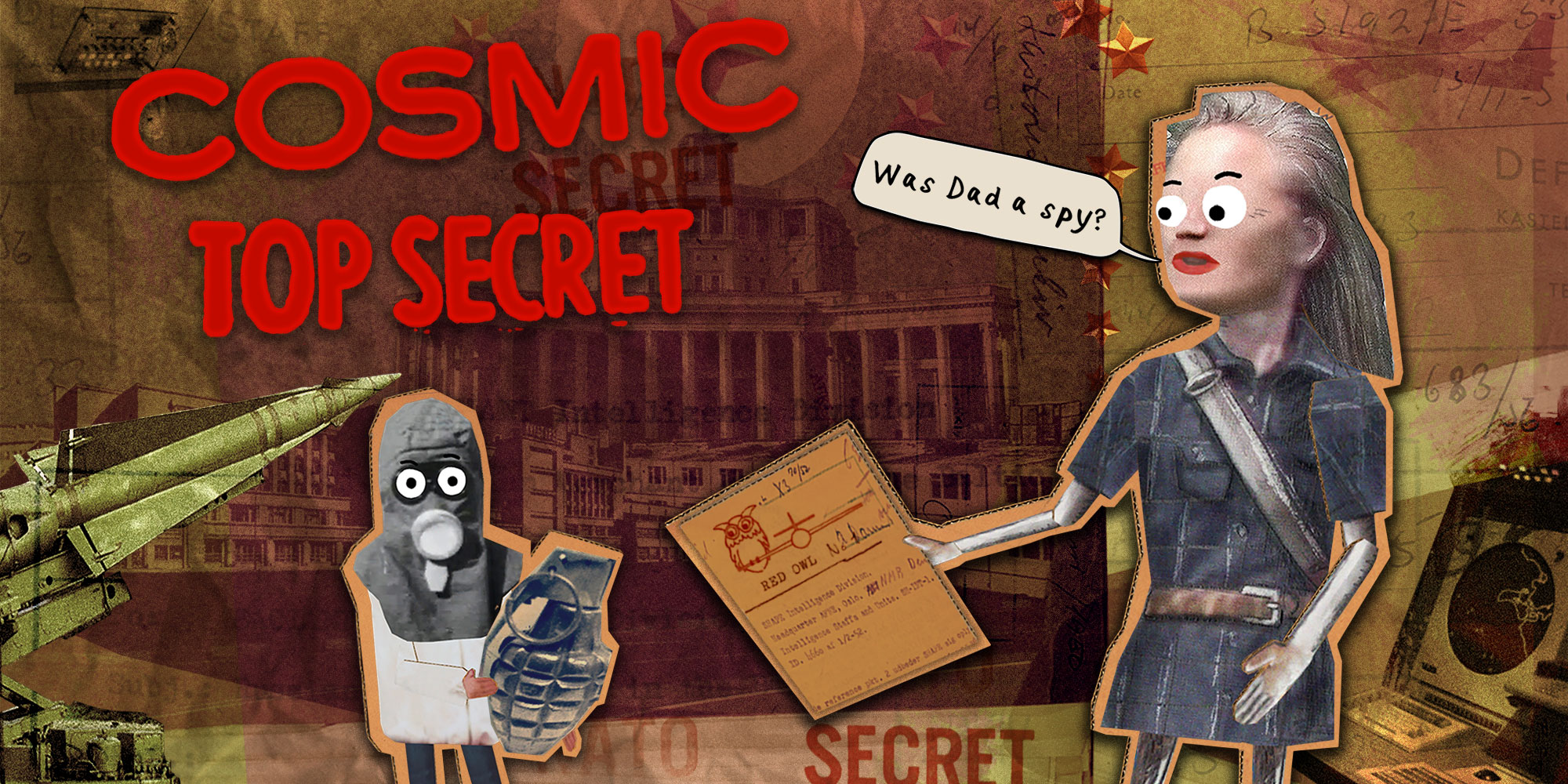 After a decade of critiquing games in some form or another, I think it’s fair to say I’ve developed a taste for the unusual. Sure, I enjoy reviewing all types of games but when our Finger Guns inbox is blessed with a pitch for something innovative, strange or downright weird, my hand is the first in the air. When publisher Nakana.io reached out to say they’d be bringing a game called ‘Cosmic Top Secret’ to consoles, a game that needed official military clearance in order to even exist, I think it’s fair to say my interest was instantly piqued. As you’re about to find out, this title is innovative, strange and weird, all rolled up in a single package. In fact, thematically at least, Cosmic Top Secret is unlike anything I’ve played before.

As previously mentioned, Cosmic Top Secret is autobiographical. This, in itself, is rare but not entirely unique. It’s the tone and content that sets it apart from the pack. Autobiographical games like That Dragon, Cancer, Neverending Nightmares, dys4ia and Depression Quest set out to educate the player on the creator’s emotionally powerful experiences. The mood of Cosmic Top Secret is entirely unlike those games, instead telling a chipper and mostly light-hearted tale of family secrets and a daughter’s hunt to unearth them.

Cosmic Top Secret stars the game director Trine Laire who is referred to throughout the game as ‘T’. She has a vague understanding that her parents were involved in some kind of secret projects during the cold war based on a few things that her parents had said. What exactly that entailed has always remained a mystery because her parents, Hanne & Bengt Laier, refuse to answer questions. The details about their undertakings in Danish Intelligence were classified to the highest possible level of secrecy by NATO – Cosmic Top Secret. No, really. They were sworn to life long secrecy which included keeping their past from their children.

The game follows T’s attempts to quiz her patents on their past and, when that comes to a dead end, attempts to get their history declassified by the government. This is all pieced together via real photographs, recordings and video interviews with Hanne, Bengt and a host of others who served in the Danish Intelligence. It’s a fascinating odyssey that has some genuinely interesting revelations. Don’t get me wrong – None of the people interviewed in this game are the Danish version of James Bond. Instead, they fought against communism in their own important way.

Between the moments where the truth (or at least a partially redacted version of it) is being divulged, the player is party to the interactions between T and her parents. Little chats in the car. Probing questions that playfully go unanswered. Comments of support for T’s work. It’s hard not to feel a connection with the trio of core characters. Deeper than this, there are secrets that haven’t been classified by a government, personal ones held by the parents, that T is deeply surprised by. These secrets reveal a strange symmetry between T and her parents’ life. There’s a very human element to Cosmic Top Secret that’s juxtaposed against the rare, almost unrelatable circumstances that this family find themselves in and the abstract symbolism that is occasionally featured.

All of this is portrayed via a diorama-esque world separated into 6 levels. T, the other characters and the world itself is all presented as if made of cardboard. Depth is given to this 3D world full of 2D constructs by using photographs on some planes. For example, when exploring the tunnels beneath a fortress, walls show a photograph of a corridor from the real world counterpart.

The aim of each level is to track down 9 items of intelligence. These items all relate to the Laire family or to Danish Intelligence. Once put together, these items reveal a code for the exit door which increases your security clearance and unlocks the next level. For the most part, finding these intelligence items is very simple. You’ve simply got to navigate the map, following the path that has been designed into the level. Along the way you’ll chat with various characters who further the narrative.

Each level after the first also adds its own unique mechanic. For example, in the second level, you learn how to throw grenades. This skill can be used to knock down the cardboard environments to create ramps or open locked doors. Later, you’re turned into a paper aeroplane in order to fly around a larger map. There’s a pretty ingenious section towards the end of the game which has the player invert the colour of the world with a click of a button which makes different sections of platform disappear in the process.

The art style throughout Cosmic Top Secret features a number of recurring themes. Hole punched paper ribbon forms roads and bridges through the levels. Maps and charts double as flooring. There’s orienteering markers found around each level, tying to an aspect of the narrative. Then there’s the inclusion of googly eye’s on every character which – while an odd choice – gives the game plenty of eccentricity.

What’s quite impressive about Cosmic Top Secret is the way that the cardboard styled aesthetic is tied into the game play. If Agent T manages to die (or mentally struggles because of the narrative), her cardboard avatar falls to pieces. The player is tasked to then put her back together by dragging her head, arms and legs to the torso which will pop back together. In one section of the game, you’ll by using this system to move T’s separate body parts to then reassemble them elsewhere in order to circumnavigate an obstacle. The most obvious example of this blend of art style and game play is in traversal; In order to move through the world, T crumples up onto a ball of cardboard and rolls around.

Unfortunately, the traversal itself is the single worst aspects of Cosmic Top Secret. It feels both cumbersome and fiddly at the same time. To begin with, there seems to be a disconnect between moving forward with the left thumb stick and using the right thumb stick to turn. The camera movement doesn’t feel like it matches the way that T travels. Once in a rolled up ball, T feels like she’s magnetic too. When she approaches certain parts of the environment, she’ll speed around it like she hit a patch of ice. During other sections, T feels stuck to the floor. This is most obvious when travelling on raised paths that you want to drop from. Press towards the edge and you’ll stop and, in some instances, stick to the side, as if gravity forgot about T for a second. I imagine that this is to accommodate those interested in the historic significance of the game’s content rather than the game play. Rather than making it easier through, it simply makes the game tougher and more irritating to navigate.

Cosmic Top Secret doesn’t really take advantage of some of its biggest strengths either. One of the more unique aspects of the game is that the items of intelligence you’re hunting for are tracked against grid references on a map of each level. This is a smart way to blend the espionage element of the content with the game mechanics. It’s a shame then that it’s almost entirely unnecessary. Each item you’re hunting for emits a stream of symbols into the sky. Instead of using the map to hunt down the missing intel (which would have been thematically and mechanically symbiotic), you can simply look for the symbols which can be seen from a massive distance away and head in that direction. It certainly feels like a missed opportunity.

After playing Cosmic Top Secret, it’s easy to see why it has won so many awards. There’s undeniable originality and layers of charm on display in almost every facet of the game. It’s not the longest of games, or the most complex, but it’s nevertheless an engrossing experience. The revelations that come as part of the narrative are fascinating. The portrayal of an intelligence photographer arrested by Russians and a deep dive into Denmark’s first computer – DASK – are particular highlights. As a game examining the so called ‘cold war kids’ and the effect that that period of history had on developing minds, it’s intriguing. Alongside a meta story packed full of abstract symbolism, it’s a game you’ll feel motivated to finish and has an oh-so satisfying ending. The journey to get there is just far little too clunky at times.

An investigative autobiographical game exploring cold war espionage through the effect that that had on a family, Cosmic Top Secret is a fascinating concept that combines stark reality with Monty Python-esque eccentricity. The content of the game is captivating, following one woman’s quest to uncover her parent’s classified history. It’s a shame that the moments between the engrossing revelations often feel clunky or rote.

Cosmic Top Secret is launching on Switch, PS4 and Xbox One (review platform) on May 21st, 2021. The game is already available on PC via Steam.