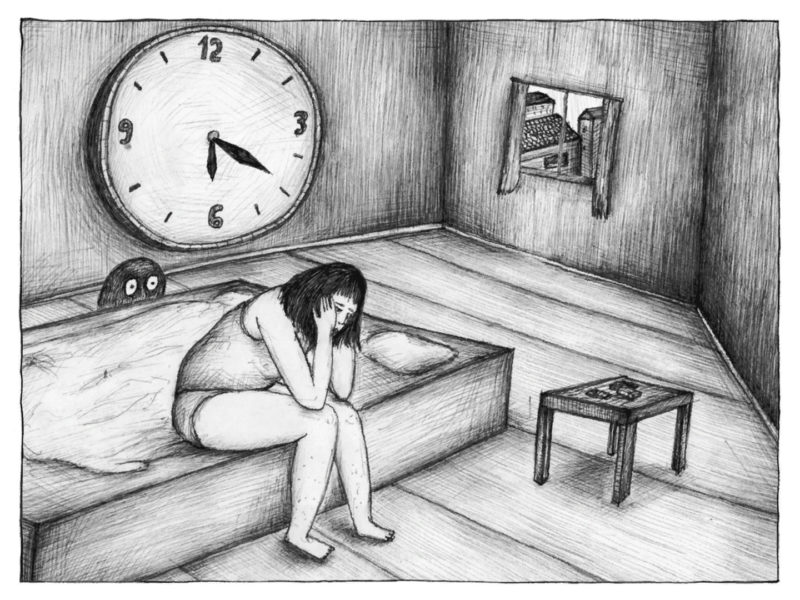 Stilstand (PC) Review – Me, Myself and My Monster

It’s almost serendipitous how certain video games manage to arrive just when the gaming zeitgeist most needs or wants them. This has never been more aptly demonstrated during 2020’s Pandemic. As the world shut down, Nintendo released a new Animal Crossing and everyone with a Switch who suddenly found themselves housebound with nothing better to do latched onto it. A few months later though and on the cusp of another lockdown in UK, the mood has changed. The novelty of staying home to stay safe and catch spiders has worn off, replaced by anxiety, uncertainty and unhealthy doses of depression. It’s apt then that Stilstand [STEAM], a visual novel about a woman’s existential crisis as her life hits the pause button and she attempts to get it going again with the help of a monster, would arrive just when it feels the most impactful. If I couldn’t relate to the anxiety and dread the lead character feels in this game 9 months ago, I certainly can now. I’d challenge anyone not to find familiar feelings in the dark comedy of Stilstand after the last year we’ve been through.

Before we go on, let’s separate the wheat from the chaff; if you’re the kind of person that ever writes the words “Is this even a game?” on the internet, Stilstand won’t be for you at all. This is a visual novel that has limited interactivity. If you like your games to have win/loss conditions, close this review now.

Calling Stilstand a visual novel does it a bit of a disservice though because it’s more of a pop up digital comic book. Clicking introduces new graphic novel-esque frames within a border or turns the page to introduce whole new sets. Points of interest are highlighted in blue and can be clicked and dragged to perform actions. Want to take a drag on that cigarette? Click and drag it there? Want a drink? And another? And another? Click. Drag. It’s an instantly intuitive control scheme that uses very little colour to highlight what can be moved or interacted with.

That’s even more impressive for a game that’s almost exclusively presented in black and white. Using an art style that I’ve personally never seen employed in a video game before, Stilstand looks like it was drawn with a ballpoint pen. It’s a totally unique look that feels like pop art or doodles that are scrappy but hugely endearing. I don’t think Niila Games and Ida Hartmann could have picked a better art style to portray melancholy. The art style is joined by an excellent soundtrack that’s often maudlin, occasionally upbeat but a consistent tone setter that’s really well crafted.

Now, you might have noticed that this review has been dancing around describing the narrative in Stilstand. That’s because this game is just 1 hour long and to describe any of the major events would be to totally undermine what this game tries to do. It’s certainly a game that is best approached with fresh eyes. The broad strokes are thus; It’s the middle of a grueling summer in Copenhagen and the lead character’s life is currently a cycle of smoking, flicking through a dating app called Splinter and lying in bed in front of a fan. If I had to guess, I’d say she was suffering from a bout of depression or has borderline personality disorder (but let’s be fair, life can feel like it’s meandering for Millenials and Gen Z without any dents to their psychological well-being). Oh, and she shares her sparsely decorated apartment with a monster that only she can see. This monster, a squiggle of pen lines with eyes to complete a creepy look, is encouraging its housemate to get out and do things. To get her life back on track. She tries. She really tries. But things don’t work out. While there’s some serious topics explored here – anxiety, feeling totally alone in a crowd, unrealistic expectations, idealization – it’s done through the lens of a survivor and with plenty of added illusion.

Despite the short running time, this title still manages to tell a compelling story with 3 acts and quirky intermissions. If you’ve ever suffered with depression or have borderline personality disorder, you might see a little (or a lot) of yourself reflected back at you here. Thankfully it’s a fun house mirror that’s there to entertain you rather than shame you or open old wounds. Stilstand manages to strike a truly unique tone by being both raw and relatable yet whimsical and fanciful. The level of self awareness that this game demonstrates is on another level.

The uniqueness of Stilstand is most aptly demonstrated by the portrayal of “the monster”. In so many games involving mental health, depression or mental illness is expressed as a villain. In this game, that’s not the case. This monster? It’s a very unique take on an aspect of mental health that’s rarely, if ever, explored in video games. There’s PhD level physcology being employed to tell a story here and it’s excellent.

My main misgiving about Stilstand? While the ending itself is poignant, I felt like it needed a little more interactivity to really achieve a cathartic and emotive release it felt like it was aiming for. Unlike so much of the game that feels like an interactive pop up book, the final 5 minutes of the game feels more like a traditional visual novel.

Here’s the bottom line though – If you’re a quantity over quality type person, counting minutes played rather than experiences had, Stilstand will leave you feeling short changed. It can be completed in one sitting and is shorter than a movie. If you’re on the lookout for video game experiences that are original, compelling and don’t outstay their welcome, this is Stilstand. I was disappointed when the game ended, but only because I’d been so engrossed with what it was attempting to accomplish. As the world once again starts to slow down to ease the pressures of COVID-19, this game feels like a refreshing reminder that with a little help, we’ll pull through. Hopefully.

A unique narrative framing and art style give Stilstand the tools to tell the story of one woman’s summer long existential crisis in a compelling and original way. It’s a short experience but one that’ll be deeply relatable and darkly funny to those who know the sting of anxiety and depression. This is one of 2020’s hidden gems.