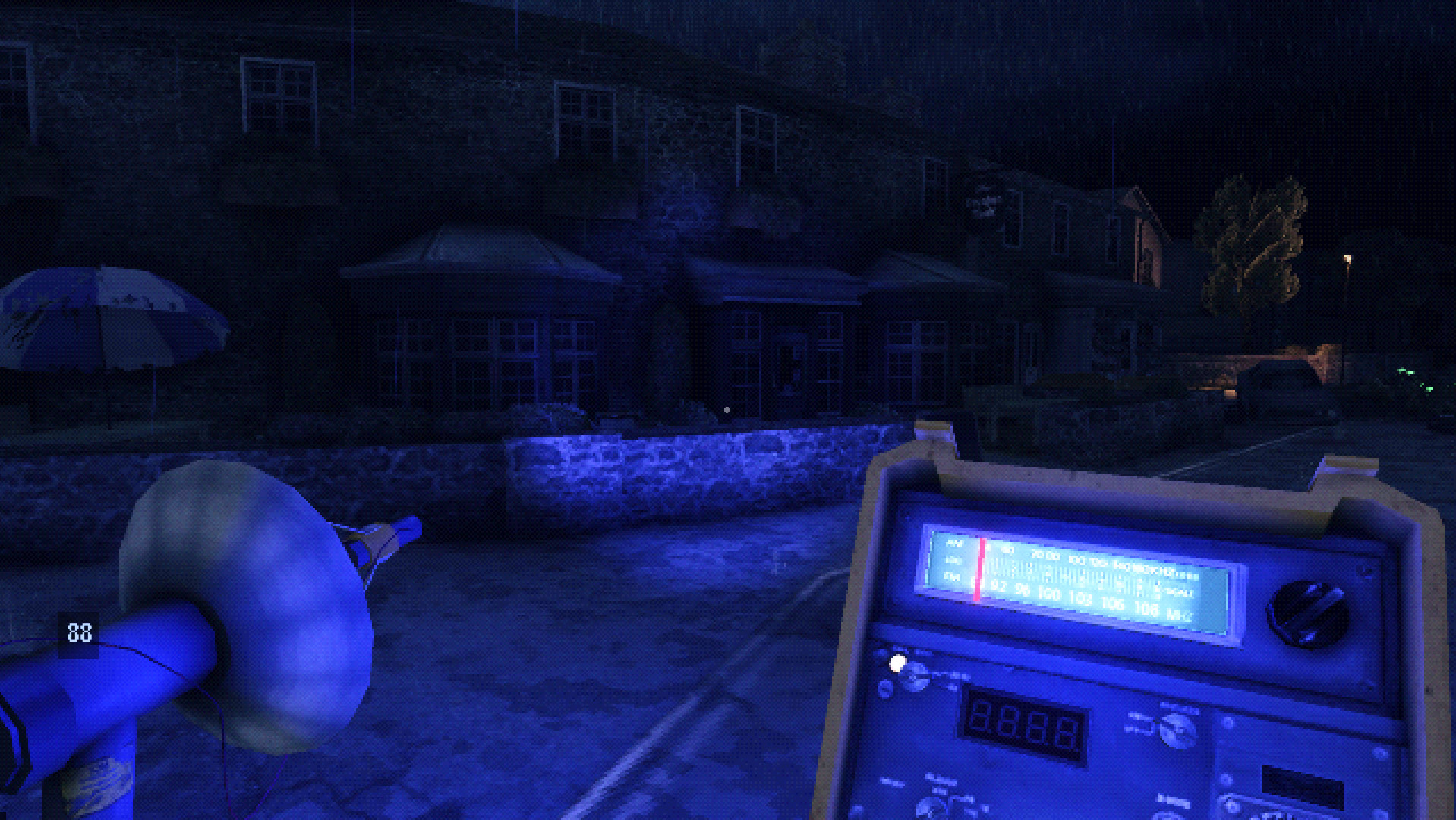 A PS1 inspired thriller, Chasing Static has a familiar premise and can feel like playing sonic whack-a-mole at times but it’s still worth the 3 hour time investment. The Finger Guns Review.

A PS1 inspired thriller, Chasing Static has a familiar premise and can feel like playing sonic whack-a-mole at times but it’s still worth the 3 hour time investment. The Finger Guns Review.

The rising tide of PS1/PS2-era art and visual styles is here to stay. Replacing the status quo of 2D pixel art, developers have firmly moved their focus to the chunky 3D visuals of the late 90’s and the early 00’s. The latest game to arrive in this ever expanding niche is Chasing Static, a retro inspired thriller from Headware Games (Guard Duty) and publisher Ratalaika.

Set in the 80’s, Chasing Static has you play as a character called Chris. Having attended his estranged father’s funeral, Chris gets lost during a storm on the way home and takes shelter in a Welsh roadside diner. Here he witnesses a supernatural attack on a waitress before he wakes up in a peculiar version of the real world. Led by a mysterious voice on a radio, Chris must re-activate a series of machines set around the area to contain “the incident” and uncover the truth of what is going on in the Welsh town of Hearth.

The narrative of Chasing Static exists on two levels, one of which is great while the other, I felt, needed some tightening up. The first is the overarching story of Chris’ quest to figure out what’s going on in the area and how or why that relates to himself. The game telegraphs its best narrative beats early on and then puts this whole arc on the backburner until the end point a few hours later. By that point, it’s quite predictable, especially if you’ve watched Stranger Things, which shares a few similarities with the story. Despite its twists being relatively easy to foresee, the story is still worth seeing through to the end. There’s multiple endings to unlock but they’re all dependent on a single decision made very late on.

The other narrative element of Chasing Static is much more interesting; Around a quarter of the way through the game, you’re given a device which can track echoes of the past via radio static. This machine tells you when you’re looking in the right direction and how far away these echoes are. Get close and the screen will flicker with static and shadowy figures will play out a scene that occured before you got there. These short but informative episodes often have a creepy vibe, exploring the horrific events that came before and the effect that the anomaly you’re exploring has on people. Like time travelling breadcrumbs that lead the way through the game, these echoes act as a guide.

The radar dish-like tracking device is at the core of the Chasing Static experience, for better and for worse. At times, you’ll be in large areas, like a village or a wide open space, without much of an idea as to where to go. It’s not uncommon to spin around while walking to see if anything registers on your radar-gun-thingy, just to find a way forward. A lot of these echo scenes show how to make progress in the present with Chris, so if you’re stuck, it can sometimes feel like playing audio whack-a-mole, spinning around to try to find a signal.

Mechanically, Chasing Static is a lot like Everybody’s Gone To The Rapture mixed with aspects of an inventory heavy point and click adventure. Chris will come across obstacles and he’ll exclaim to himself “I need X” which you’ll then have to set off and find. Once you’ve found where you’re supposed to be via the echoes, Chasing Static has some quite impressive game design which drams your eyes to the things you’ll need or the things that’ll creep you out.

And Chasing Static certainly has the potential to creep you out. This isn’t a traditionally scary game – there’s no dangers to avoid, foes to fight or a single jumpscares. Instead, it builds up a thick atmosphere with dark, oppressive environments, a script full of off putting lines and some excellent use of sound.

Those PS1 inspired visuals manage to carry a lot of tone, despite their relative lack of detail. This often works in the game’s favour; There are times that the blurry visuals of a character’s faces look more like skeletal masks rather than eyes, nose and a mouth. As you move through the woods, with the rain battering the landscape, the crunchy outlines of the trees and grass can play tricks on your eyes. Moreso when a bolt of lightning illuminates the area.

It’s the audio that does most of the heavily lifting in the thrill department however. The ambient noise around each area is filled with quiet noises you’ll barely hear but make for an unsettling blend. Out of the static, you’ll hear children crying or dulled voices saying incomprehensible words. While the visuals might be retro inspired, the audio to Chasing Static is rooted in modern day techniques and standards.

This extends to the voice acting too. It felt almost peculiar to hear genuine British accents rather than the usual fake “what Americans think British people sound like” accents but they sound real here. The script is natural and the voice actors make conversations feel real (or as real as they can be between scientists in Hazmat suits investigating a murderous anomaly).

Clocking in at between 2 and 3 hours long, Chasing Static is a short but succinct experience. When it’s all said and done, the game feels like just the right length. The game ends before the mechanics become tiresome. If you’re looking for a game you can start and finish in an evening, Chasing Static certainly fits that bill.

It won’t be winning any Game of the Year awards but Chasing Static is a compact narrative thriller worth an evening of your time. Its story isn’t as engrossing as those of its peers and it can be a touch confusing at times, but a mix of crunchy, nostalgia fuelled visuals, high quality audio and a great script make for an interesting combination.

Chasing Static is launching on October 14th, 2021 on PC via Steam.