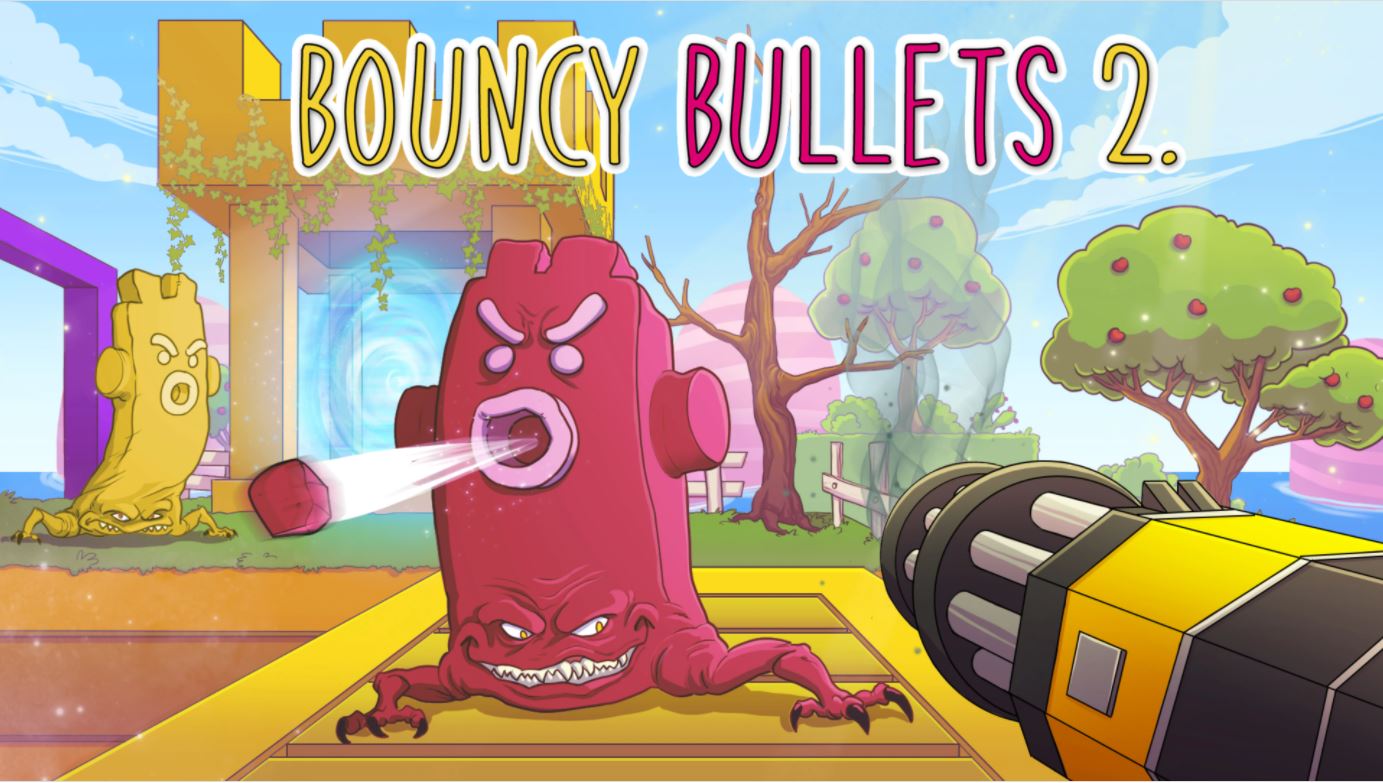 The first person parkour/shooter series returns with Bouncy Bullets 2 and it’s a much better game, yet still falls short of its potential. The Finger Guns Review.

Petite Games are a prolific and varied developer. From first person shooters like Super Destronaut: Land Wars, arcade games in Super Destronaut DX-2, 2D platfomers such as 36 Fragments of Midnight as well as top down shooters like Attack of the Toy Tanks, the developer has produced a myriad of games over the past few years in just as many genres. Petite Games are also a developer that has shown a real upward trajectory in quality. They’ve created a number of series’ that they regularly revisit. With each new instalment, the games get better. They’ve turned the Midnight series into its own thing. The Super Destronaut series has been improving in quality. Now they’ve returned to Bouncy Bullets, a game they originally released in 2019.

The fact that Bouncy Bullets 2 exists at all is a surprise to me. I reviewed the original in 2019 and while it has a promising premise, I said that it “doesn’t make the most of these idea’s which, coupled with some technical issues, makes for a frustratingly shallow experience“. Thankfully, the sequel is much better than the original game.

Bouncy Bullets 2 is a first person shooter with heavy platformer elements. The aim of all 45 of this game’s levels, split into 3 difficulty chapters, is to make it to the ending portal without dying. Between the starting point and the exit are a plethora of hazards. Lasers, spinning saw blades, spike pits – hell, even falling into the water surrounding each level is a danger to the player character. The task at hand is to jump and run around these obstacles to reach the end point.

The most unique aspect of Bouncy Bullets 2, like its predecessor, is the marriage between the enemies and the offensive capabilities. While all of the enemies in this game look like the inflatable tube men you see outside used car dealerships, dancing in the breeze, there are some not so subtle differences. Namely, their colour. There are 5 different types of enemy in Bouncy Bullets 2. A red one, a yellow one, a black one, a grey one and a foe that switches between red and yellow every so often. In order to defeat these enemies, you’ve got to shoot them with their corresponding bullet. To shoot magenta bullets, you click R1. To shoot yellow bullets, you click L1. Shoot a red enemy with a yellow shot and it’ll simply bounce right off and vice versa.

Bouncing bullets off walls is the other hook for Bouncy Bullets 2. Every shot will bounce from any surface they hit. This can be used to fire around some corners to avoid incoming projectiles. In fact, it’s a necessary tactic during some levels. Those aforementioned black enemies? They can only be destroyed with a bullets that has been bounced off of a surface. Whether it be the floor or a wall, the bullet just needs to bounce before it lands.

More so than its predecessor, Bouncy Bullets 2 makes reasonable use of this mechanic. There are levels with grey enemies – which, if hit, end a level – positioned directly in front of other coloured enemies. While I’d still love to see this mechanic used much more creatively (like having levels where you’re forced to ricochet bullets around corners in order to progress), it’s pleasing to see it used a little more than in the previous title.

Much like it’s predecessor though, Bouncy Bullets 2 doesn’t last very long. There’s less than an hour of content here, with each level lasting between 30 and 100 seconds. There’s not a vast amount of variety in those 45 levels either. All of the same platforming components return from the first game – bounce pads, coloured chequer box walls that fall apart when shot with the corresponding colour, spike traps. It’s all the same tricks used in slightly different ways. There are gaps to jump across and falling platforms to navigate. New for this release are lifts, falling platforms and a personal favourite, portals. These all add new dimensions to the game play but they’re not used in any way you’ll not have seen before countless times in many other games.

Similarly, there’s very little reason to ever replay Bouncy Bullets 2. There’s optional collectables in each level in the shape of a golden nut. These are often in tricky to reach locations which add an additional challenge, but because they have no discernible impact on the game, there’s really no motivating factor for the player to bother collecting them. There’s 2 game play modes in this game too – classic and speed run. Both feature the same levels, but the scoring is slightly different. In classic, your score is calculated on speed, number of shots made and number of enemies defeated. In the speed run mode, you’re purely scored on speed from start to finish. It feels like a missed opportunity that neither mode has offline or online leaderboards. Your best score is tracked and that’s the only goal you have to beat.

Bouncing in the right direction

What certainly has improved is the presentation. The first Bouncy Bullets looked like a Nickelodeon game show had collided with a Krispy Kreme store. It was garish and grating. Bouncy Bullets 2 is much more pleasing on the eye with a kind of castle-like aesthetic. While I’d stop shorting of calling it attractive, it’s definitely not as irritating as its predecessor.

The music of Bouncy Bullets 2 is almost exclusively brilliant. Some tracks do sound like they’d make good backing to YouTube make-up tutorials. That said, most of them are frankly great dance tracks that I’d happily listen to while walking or working. Beefy base, heavy drops and fast tempo beats do well to complement the speed and frantic energy that this game gives out.

That energy really shines through in a few of the levels in the last third of the level. There’s one level with moving platforms while a row of inflatable tube men enemies rain down projectiles on you that really stands out as a highlight. There’s another level where a lift carries the player up a shaft that is lined with enemies that come at you from different directions. If the whole game was as challenging and as tense as these moments, I’d be praising Bouncy Bullets 2 from the rooftops. In fact, despite being surprised that a second game in this series even exists, I’m quite excited about the potential for a Bouncy Bullets 3. While this game still doesn’t fulfil the potential that the hook obviously has, it’s a bounce in the right direction.

Oh, and it’s a game from Ratalaika so it has an easy to unlock Platinum Trophy too.

It’s short, has little to no replayability and still doesn’t fulfil the potential that the premise has. That said, Bouncy Bullets 2 is a move in the right direction for the series, offering bite sized, first person platform challenges. It’s nicer to look at, has a much better soundtrack and there are a handful of levels that show glimpses of what this series really could be. It’s just not frequent enough to elevate the game out of mediocre trophy fodder.