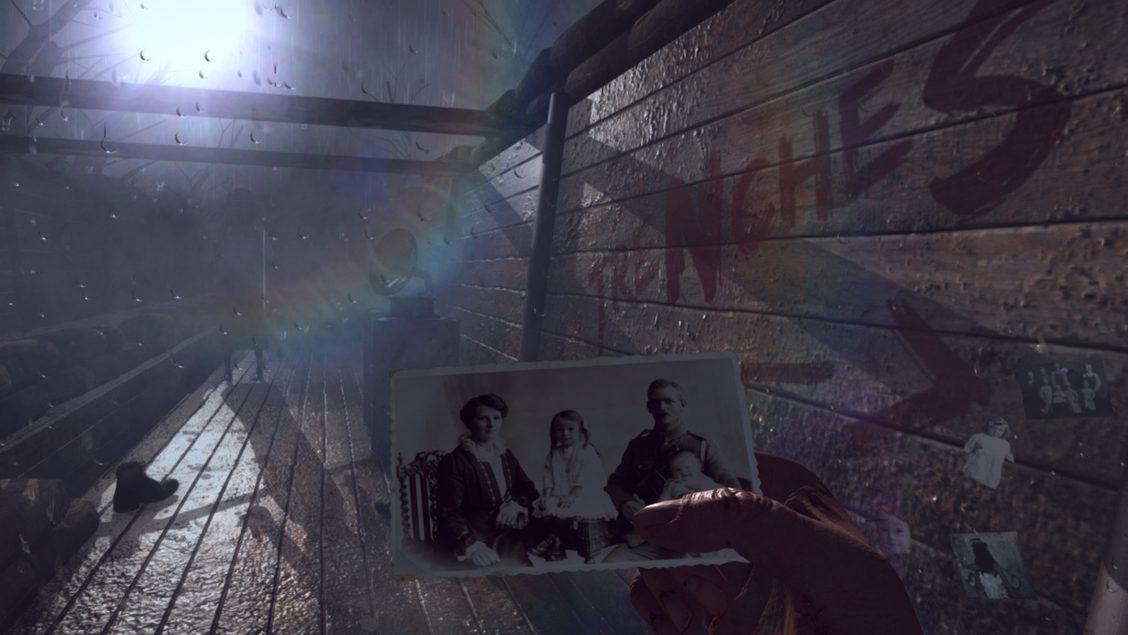 There's more than trench foot and enemy soldiers hiding out in Trenches, a horror game steeped in the terrors of WWI. The Finger Guns Review.

There’s a few locations that should be a real slam duck in terms of location for a horror game. Creepy mansions, mysterious underground laboratories and abandoned schools are the most obvious and as such, are among the most frequent in the genre. The war torn trenches of the world wars however feel relatively untapped.

Trenches, a short First-Person World War l survival horror game from a single team member at Steelkrill Studios, is one game that attempts to utilise its titular location as part of its scares. Originally released on PC back in 2021, the game has crawled under the barbed wire to release on consoles. Unfortunately, the porting process has seen some noticeable issues appear in the PS5 version.

“Only the dead have seen the end of war”

Trenches is an amalgamation of a supernatural story combined with real world WW1 photographs. In the game you play as a James R Johnson, a soldier that finds themselves in a trench somewhere in 1917. The game isn’t more specific than that. At the very start of the game, your character is looking at a picture of a family before being allowed to freely roam around the titular trench network.

You don’t have to travel far before you start to realise that something is very wrong here. After moving through the initial segment, you’re drawn to a doll that’s lying on the ground by the ear piecing sound of a baby crying. Red writing on a wall (a trite trope at this point) indicates that there are 9 of these dolls in the trenches. In order to escape the muddy, rain slick lanes, you’ll need to collect all 9 of these dolls then find a ladder. To find these dolls in the foggy corridor, you have to follow the sound of a baby crying. Yes, that’s about as annoying as it sounds.

While you explore the trenches, the supernatural aspect of the game becomes far more prominent. There’s jump scares a-plenty as ghostly women, tall abominations, disembodied hands and more attempt to shred your nerves. Things will move on their own or you’ll briefly see shady figures peering around corners. It’s an almost non-stop barrage of jump scares which sets the game’s tone. This tone is complemented the sounds of war and people suffering out in the distance.

What waits in the fog of war…

While none of the jump scares in Trenches will cause you any physical harm, there is another danger that’s lethal. Stalking the wood lined lanes of entrenchments is an abomination of a creature. This creature responds to your presence, moving in on your location when you cause any of the wood flooring to creak beneath your feet. It clomps towards you with the footsteps getting louder as they close in. If they clap their eyeless face on you, your only hope is to run to one of the hiding spots dotted through the trenches.

This is where Trenches starts to fall apart. The AI for this creature is not anywhere near as intelligent or aggressive enough. I didn’t even know this monster existed in my first play through the game until near the end. It just felt like an invisible set of foot step sounds that occasionally got louder. It’s certainly possible to walk through the entire game without ever coming face to face with it. If you do get caught by this creature, you’re back to the start of the game. All progress is lost.

What you’re left with is an admittedly atmospheric jaunt around some muddy trenches that relies heavily on jump scares that quickly lose their potency. You may or may not run into something more threatening, and if you don’t, the most terrorising aspect of this game is the repeated noise of babies crying. Those moments when you bump into the monster can be thrilling, especially if they’re unexpected. Because of the AI’s limitations however, those are few and far between.

To compound this, it’s very obvious that a lot of concessions have been made in order to get Trenches running on the PS4 & PS5. The original PC version, even in its Early Access state in 2021, looks somewhat realistic. There was decent lighting, a decent enough draw distance and while the textures were repetitive, they looked highly detailed. None of those aspects are true of the PS5 version.

The textures look dull throughout, lacking the detail from the PC version. The lighting is off, with much of the trenches unresponsive to a giant spotlight that gives off enough lens flare to make JJ Abrams proud. The fog in the PC version looked thick but realistic, where as it looks like thick, airborne porridge in the PS5 version. A lot of the finer details in the distance have gone too, or are hidden completely by the fog.

There’s a few bugs in the PS5 version of Trenches too. In my second play through of the game (after finally getting caught by the monster near the end on my first), a loud sound played repeatedly. It sounded like one of the sound effects that accompanies some of the jumps cares but for whatever reason, it simply played over and over. I ended up switching off the game as I couldn’t hear the baby crying sound effects. Then there’s the occasional wall that flickers in and out of existence as you walk by them.

Finally, in the PC version of Trenches, there’s a log of sorts where you can refer back to the documents you’ve collected. This can be letters from the front line or helpful hints in the game. That feature is missing entirely from the console version. At one point in the game, you collect a map with which you can help navigate the maze like corridors. In the console version, there appeared to be no way to bring that up. You get one glance at the map and that’s your lot.

Despite its flaws however, there’s some well put together scare hiding in Trenches that utilise real World War 1 context. At times, photographs of life in the war flash before your eyes, for example. I won’t spoil it here, but when you finish the game, there’s context given to the whole experience. While I couldn’t find any evidence of it being a real story on the internet, it’s a plausible story about the horrors of war, both in and beyond the trenches. For that alone, this game might be worth an hour of your time.

It has suffered in the porting process from PC to PS4/PS5 but Trenches is still worth an hour of your time if you’re into jump-scare heavy horrors. By combining supernatural scares with the real horrors of trench warfare, it can certainly be unsettling at times. It’s a shame the bugs and quality issues can be equally as unsettling.

Disclaimer: In order to complete other reviews, we purchased a copy of the game. For our full review policy, please go here. This game was bought by the reviewer.