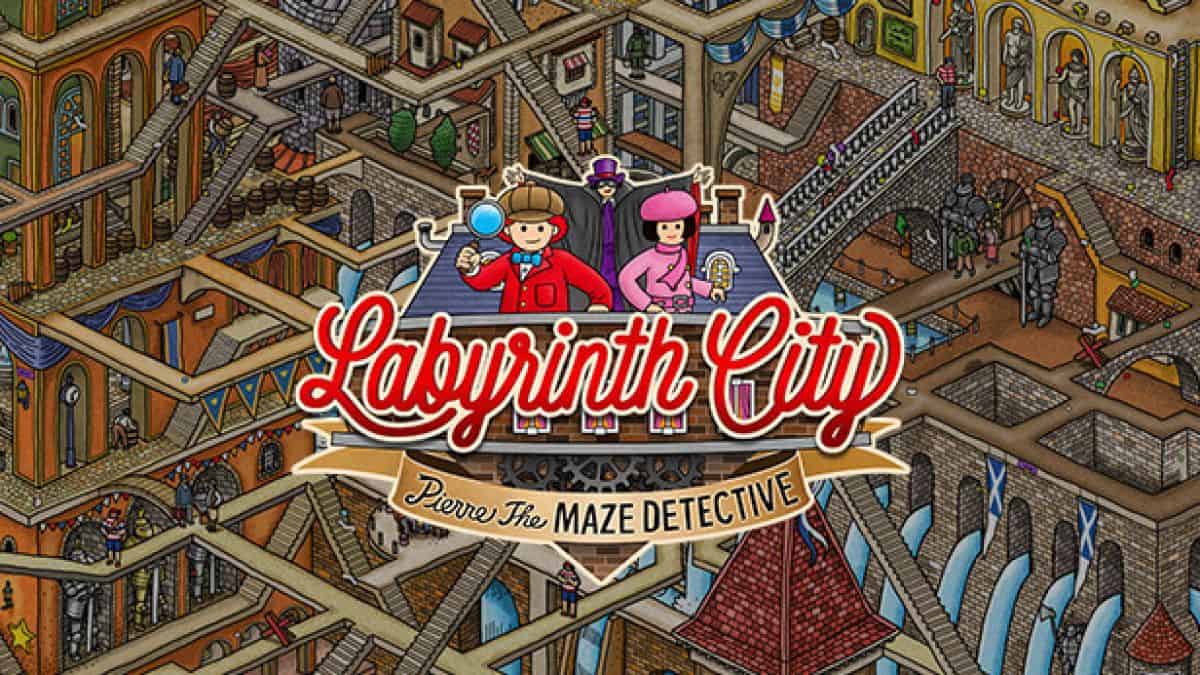 Those were the words my 8 year old muttered when he first clapped his eyes on Labyrinth City: Pierre the Maze Detective. Having recently fell in love with the illustrated book series that this game is based on, his eyes lit up as the busy scene came to life before his eyes. Those imaginary journeys he has had, tracing his finger along the pages as he wormed his way around their intricate routes, became a reality he could interact with. Needless to say, this game delivers for its target audience.

If you’ve not encountered the Pierre the Maze Detective books, here’s a little primer: Imagine a Where’s Wally book with an aligned, early 1920’s-30’s art style. They feature a young boy clad in red – Pierre – who’s the main protagonist. The aim of each page, resplendent in fine detail and minutia, is to make your way from the start to the end like a maze. Along the way, you’ve got to try and spot some hard to find items or people, like a quest. The art work in these books, illustrated by Hirofumi Kamigaki, is stunning and is brimming with character.

Labyrinth City: Pierre the Maze Detective takes these books and adapts them, creating a video game with the same concept. Rather than the static pages of the book however, the world moves and interacts with Pierre as he moves through it. It’s a neat idea that’s executed really well.

In Labyrinth City: Pierre the Maze Detective, the nefarious Mr X is up to his old tricks again. He has stolen the Maze Stone from the Opera City museum and is attempting to escape. With Pierre hot on his tracks, Mr X uses the power of the Maze Stone to transform (almost) every location into a labyrinth to slow down his pursuer. Narrated by Pierre’s friend Carmen, the story is built up via comic book like art panels between each level. While the story lacks any kind of nuance, the simple framework gets the game from location to location are sets up these scene for the actual gameplay.

At the start of each level, you’ll find Pierre at one side of the map and his end point some place entirely different. Using the arrow keys or an intuitive mouse system, you’ve then got to guide Pierre towards it. Instead of trying to complete the whole level in one go, Pierre is given 4 or 5 checkpoints to reach along the way which will progress his investigation. This games the game a real feeling of sleuthing, as if your following a breadcrumb trail through these intricate mazes. For example, in one of the early levels, Pierre is attempting to find Mr X but his questioning of certain characters takes him to other purple clad characters who look similar to the thief until he has finally whittled it down to the actual location.

Upon reaching each level in Labyrinth City: Pierre the Maze Detective, the busy, circuitous panoramas can be a little overwhelming. Thankfully, there’s clear routes that look like faded pathways through each scene. Of course, that doesn’t mean you’ll be taking the right path. Like any good maze, there’s dead ends and branching paths that’ll have you wondering if you’re headed in the right direction. If you were to navigate these mazes in the book, heading to these dead ends might take a few seconds of finger pointing but here, it can take a few minutes in some cases. That can be a tad annoying at times. To alleviate some of the added frustration, Labyrinth City: Pierre the Maze Detective includes something you won’t find in the books – wizards. Get close to one of these and interact with them and they’ll create a helpful arrow which points you in the right direction.

That’s not the only thing in Labyrinth City: Pierre the Maze Detective that you won’t find in the books either. There’s a number of additional collectables and challenges. In every level there are 3 stars, 4 chests and pages from Mr X’s note book hidden around each level. The stars and chest are hidden in plain sight, often situated down those dead ends as a kind of reward for going the wrong way. The stars don’t really do much other than act as a collectable but the chests unlock collectable keepsakes from each level which are presented in a trophy gallery from the main menu. The Mr X note book pages are the real test here though. These can be hidden in anything. Behind window shutters, in car trunks, in a mail box, inside a bin – any interactive aspect of the world could potentially contain a page from the note book.

A large amount of the game worlds in Labyrinth City: Pierre the Maze Detective are interactive too. Whether it’s talking to characters lining the maze paths or messing with inanimate objects, this gives the game a real living feeling. Where ever an icon pops up, an interaction can take place. Opening windows and doors to see what’s behind them. Getting a sentence out of a character, some of which are quite humorous. Setting off events in the world that do nothing mechanically meaningful other than to make the game visually appealing, like setting off fireworks. All of this helps build a real sense of exploration as you progress through.

Each level in Labyrinth City: Pierre the Maze Detective also has an optional puzzle. These are simplistic, like memory puzzles or that cup game where you have to keep an eye on the one that contains the prize. While these aren’t exactly complex, they’re a nice additional extra that my kids enjoyed.

To top off the experience, Labyrinth City: Pierre the Maze Detective has a really excellent soundtrack and some decent sound effects. The music accompanies the theme of each level to boost its atmosphere. It’s a very well put together soundtrack that manages to complement the art style, the game play and the character of the level.

Labyrinth City: Pierre the Maze Detective is a niche title. Walking around mazes, as interactive and as pretty as they are here, won’t entertain everyone. My eldest didn’t get through the first maze world of the game before wanting to play something else. My other kids adored the game and all 3 of the boys have completed it. I think it’s fair to say that this game won’t be for everyone but if you like the Pierre books, you’ll like – and maybe love – Labyrinth City.

A gorgeous virtual recreation of The Search for the Stolen Maze Stone, this game is damn near essential for fans of the Pierre the Maze Detective book series. It won’t be for everyone, but it brings some stunning artwork to life and adapts the concept of the book into an enjoyable game.