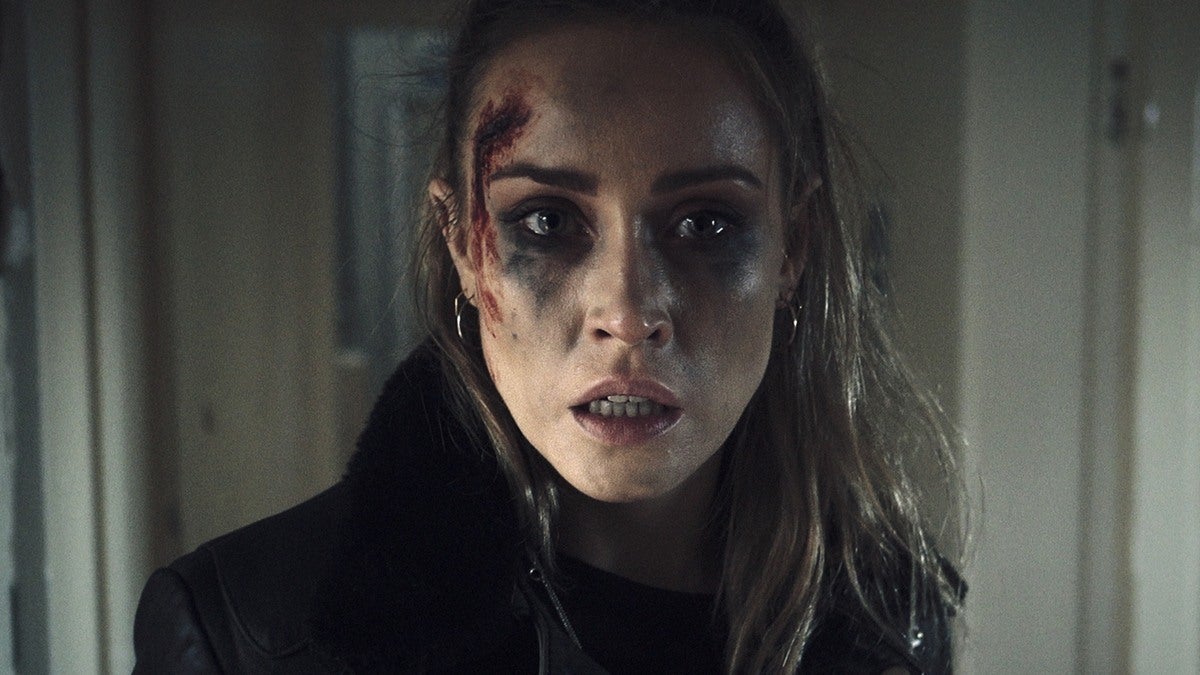 When a game is described as an “interactive psychological thriller” in which you “unearth a string of dark secrets”, the last thing you expect to be doing while playing it is laughing. Laughing so hard and for so long that you get stitch. That’s exactly what my wife and I did during our first play through of I Saw Black Clouds. The latest interactive movie/FMV game from genre specialists Wales Interactive, in collaboration with Ghost Dog Films, pitches a lofty premise. It sometimes struggle to deliver on this with very confusing results.

I Saw Black Clouds follows the path of a woman named Kristina, played by Nicole O’Neill (Penny Dreadful, Red Sparrow). She has returned to her British hometown after the mysterious death of her friend Emily. Guided by a supernatural force, she’s compelled to investigate the events leading up to Emily’s apparent suicide. As she snoops around, she’ll meet a cast of characters, each as suspicious as the last. Retracing the life of her friend, she’ll visit some spooky and unnerving locations around Shropshire as she tries to get to the bottom of a morbid secret.

The game itself is presented in the industry accepted standard for interactive movies/FMV games these days; you’re treated to sections of a movie and at certain junctures, you’re presented with options to choose from. Those options can send you down different branches of the story. There’s quite a difference in the paths you can travel down here with 2 main branches with different themes. A lesser used aspect of FMV games is also included in I Saw Black Clouds too – relationship and trait tracking. Each decision made is tracked against a series of characteristics that shapes Kristina’s underlying traits and relationships with 2 key characters. Tailoring these stats is integral to finding some braches of the narrative (more on these in a second) that are otherwise locked away. Lastly, despite featuring some fight scenes, there’s no QTE sections in this game. Instead, you shepherd Kristina through these scenes via quick fire decision making.

The core issue that I Saw Black Clouds has, the reason my wife and I descended into fits of confused giggles, is that the branching narrative can ignore the choices you’ve made previously. At one point, Kristina was woken up by knocking at her door. We decided to ignore it and go back to sleep, a valid option presented by the game. Later, there are numerous mentions made to the time Kristina saw a ghost – only on that particular play through, we hadn’t seen a ghost. We had ignored it in favour of getting some more beauty sleep. Cue some furrowed brows. Later, while having a conversation with another character we chose not to say anything, again a valid choice presented by the game. After a few seconds of awkward silence, the character across the table blurted out “No, I think she was killed”. It made no sense and was out of context, as if the character was replying to something Kristina was supposed to say and hadn’t. It certainly feels that I Saw Black Clouds has a narrative destination it wants you to reach but offers choices which are counterintuitive in actually reaching it.

There’s also a large number of fake choices in I Saw Black Clouds. I’m not usually averse to choices that have little to no bearing on the story itself so long as it helps develop the characters. That’s not often true here. In one section, a character asks you to close your eyes. You’re then presented with a choice – Keep your eyes open or close them. No matter what you choose, Kristina will end up closing her eyes. In another section, while being stalked by [something], you’re given the choice to hide or take a look at what’s out there. In one branch of the narrative, it doesn’t matter what the player chooses, Kristina ends up being chased around.

On the surface, these decisions appear to do nothing but offer an illusion of choice. They are however impacting the background stats and relationships with other characters. These can be viewed any time from a dedicated screen. The issue I found with these stats is that it’s not immediately apparent how certain choices will affect the traits or friendships. The 3 core stats you’ll want to alter can define the narrative and ending you’ll get (from a range of 4). They are Acceptance, Denial and Guilt. For many of the choices, I had absolutely no idea how they would impact these stats. They don’t immediately scream “This would make Kristina feel guilty” or “This’ll increase acceptance”. I resorted to checking the stats screen after each decision was made to see how that impacted the levels of each trait. It felt like the only way to know for sure. There’s a certain context to the core traits which is totally absent for your first play through too.

I Saw Black Clouds isn’t a FMV games that always diverts the story to an ending point regardless of player choice. There are failure conditions. Make a decision that puts Kristina in danger and there’s a chance she’ll actually die. This should give the game tension – but because the game simply resets at a checkpoint before the player makes the fatal choice, failures lose any kind of impact.

Technically, there’s some issues with I Saw Black Clouds too. There’s one video section that’s missing where a placeholder screen plays instead (this is apparently being fixed but still exists at the time of writing). Even for all of the complete scenes, there’s a consistent stuttering between each clip of the interactive movie. This is most obvious in scenes that have backing music (which is excellent, by the way, especially the songs sang by Victoria Tew). Make a choice and the next will start immediately. This gives the scene a disjointed feel, like a CD is skipping with each choice you make.

The most controversial aspect of I Saw Black Clouds is likely to be the narrative device that comes into play about three quarters of the way through the game. I’m not going to spoil what this is because it’s pretty integral to the way the whole game plays out but it’s one of those twists that you’ll either enjoy or find really tired. I find myself in the latter camp. For me, it hit with the same tone as the notorious “It was all a dream?” Dallas ending.

While I’ve listed a lot of issues with I Saw Black Clouds, it’s not all bad. Most of the performances in this game are pretty convincing. Nicole O’Neill’s Kristina might not be the deepest, acting more as a proxy for the players choices than a fully fleshed out character, but the moments when she does get to show emotion are very convincing. Rachel Jackson who plays Kristina’s old friend Charlotte is a stand out here. Her blood curdling scream is one of the best aspects of this entire game and when she’s not in danger, she makes for a very likeable character. Some of the other cast members – Larry Rew as Alexander, Babette Barat as Dominique, Charles O’Neill as William and Cara Middleton as Sarah – manage to bring a lot of sinister energy to their characters.

That’s coupled with intermittent sections of really great writing and direction. There are moments in I Saw Black Clouds where you’ll have no idea whether to trust or be wary of a character. It’ll have you suspecting almost every character you meet, even the kindly Reverend that’s maybe a little too forthright and friendly.

Whoever did the location scouting for I Saw Black Clouds should get a big bonus too. The areas that are explored in this game are truly creepy. An abandoned hospital, a creepy clinic, an ominous country house and more make for some unsettling places to roam around in. I never knew there were so many spooky corridors in Shropshire.

I’ve been a vocal supporter of the quality Wales Interactive have been putting into the FMV/interactive movie genre. With their originals like Five Dates and The Complex, as well as the porting work of PC titles to consoles, the publisher has been putting out some of the best games in the genre. I Saw Black Clouds shows plenty of potential but doesn’t match up to their previous output. The branching narrative isn’t well crafted, the choices can often feel hollow, there’s technical issues with editing and there’s a story device that has the potential to make your eyes roll. Some convincing performances and a decent soundtrack aren’t enough to raise this title above mediocrity.

While FMV game fans will likely enjoy moments of I Saw Black Clouds, there are some core issues here that prevent it from fulfilling the potential that occasionally glimpses through. The branching narrative needs a rework to ensure it respects all of the players’ decisions because right now it feels broken, squandering what spooky atmosphere some decent acting performances manage to conjure up.

I Saw Black Clouds is launching on March 30th, 2021 for PS4 (review platform), Xbox One, PC via Steam and Nintendo Switch.

Class Is Commencing Soon as Two Point Campus Nears Release
Ori and the Will of the Wisps (Switch) Review - The Perfect Port?
Songbringer Review – A relentlessly punishing RPG