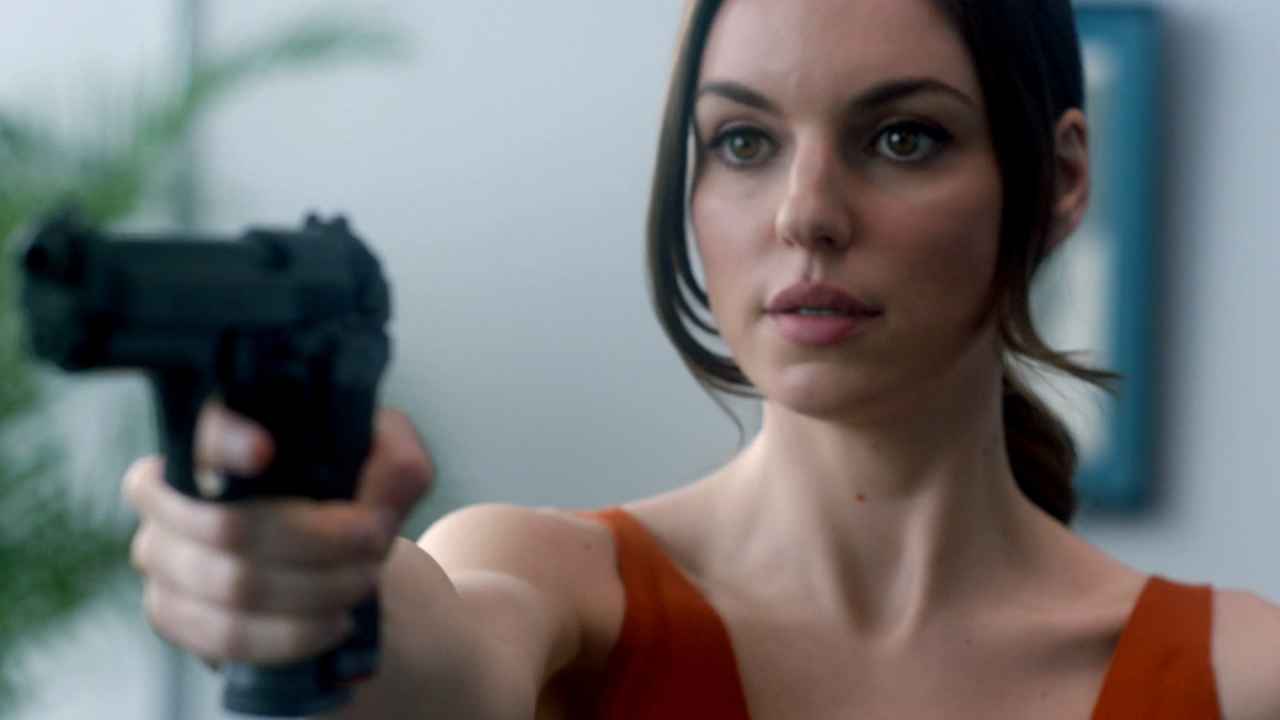 An Interactive science fiction B-movie that harks back to the days of Choose-Your-Own-Adventure novels. The Finger Guns Review.

An Interactive science fiction B-movie that harks back to the days of Choose-Your-Own-Adventure novels. The Finger Guns Review;

I read recently that within the next ten years, futurists – that’s real people whose job is to predict the future (not Minority Report’s vat precogs) – envisage a world where our film and games industries merge, where our entertainment is, more often than not, fully immersive, personalised, virtual reality stories, where we are the heroes of our own blockbusters, saving the world from mutagens, and making the hard decisions ourselves. The Complex, and other recent forays into the genre such as Netflix’s Bandersnatch, are the forerunners, the first taste of this new and exciting world.

The Complex is somewhere between a game and a movie. The team behind it, the award-winning Wales Interactive, call it an interactive movie, and I’m pretty happy with that description. It’s got a high stakes B-movie plot; After a bio-terrorism incident in London, two scientists find themselves trapped in a high-security lab, deep underground, tasked with containing and dealing with the infected perpetrator and getting out alive. Add in some twists and turns I didn’t always see coming, and soon everyone’s got secrets, and nothing is as it seemed going in. It’s a b-movie. But it feels like it’s meant to be. A bit like the first Resident Evil with its zombie-filled underground Hive. There’s just far fewer zombies in this lab.

The acting talent on display is good for the most part. The lead Michelle Myleki (Bad Blood) who plays Dr Amy Tenent, is convincing as the out-of-her-depth nanomachine scientist, as is her counterpart Rees. The eagle-eyed may also notice Kate Dickie, who played Lysa Arryn, the deranged sister of Catelyn Stark in Game of Thrones, who gives a good performance as the CEO of the complex, concerned only with her precious nanomachines rather than people’s lives.

The interactive part is where things get interesting. The gameplay is structured like one of those old choose-your-own-adventure-style story-books you might have read in junior school. Each time Amy is faced with a decision on what to do next, it falls to you the player to actually do the deciding. The script is handled well, and leads you naturally into a series of either/or scenarios; Which character’s plight do you favour, what do you want to know more about in a conversation, and how would you go about solving the characters current predicament? These clearly lead to new scenes, and lock off others, as the plot takes you down your own personalised rabbit hole without letting go for a moment.

And I kid you not, it starts immediately. Within two minutes of the title screen you are faced with a life-changing decision. You have two patients on the verge of death, but only one vial of life-saving medication. That’s really bad. That’s a serious talk with the supply closet manager, and probably HR. But that’s for later. You have just a few moments to decide; do you save the teenage boy with a promising football career ahead of him, or the young woman with a baby on the way? One lives, one dies. You decide. And it really just spirals into ever higher stakes from there.

Netflix’s Bandersnatch leant heavily into the weirdness of the actual story-telling method itself, whereas The Complex plays it straight, trying instead to make this genre more commonplace rather than a curio interesting mainly for its own self-referential plot. Its this that makes the Complex more accessible; there were plenty of stretches in its runtime that I forgot I was playing a game and just enjoyed the unfolding plot, but there were other points where I really wanted to see where making a different decision might have taken me. There are nine endings based on the secret achievements I saw, and once I’d finished, I immediately started again. How much difference would making alternate decisions make? During my second playthrough characters were getting killed off early and the plot went in an entirely different direction by the end, revealing secrets that hadn’t even been hinted at the first time. For completionists and those who are just enjoying an intricate piece of storytelling, there is thankfully a skip function (press RB) for your second round, but use it sparingly, you could miss entirely new scenes.

All the decisions you make are tracked by the game, making up a personality matrix and relationship status between Amy and each of the principal characters. Its these metrics that the game uses to guide the plot more subtly into very different final scenes, revealing some only if you have built up a high enough rapport with a specific character.

The Complex also looks good. Enough budget has been spent on props and CGI that nothing looks out of place or unconvincing. But it’s also not a multi-million-dollar blockbuster, so set your expectations accordingly.

So is it a game or is it a movie? The runtime would definitely suggest movie. Most players will have no trouble finishing their first run in about two hours. But with nine endings to find, there’s quite a bit of replayability to be had. If you don’t do it all in one sitting be careful where and when you exit – if you haven’t seen a little save icon for a while, you maybe forced to watch back quite a few minutes. I do think the developers could have programmed in a more frequent autosave function.

The precogs, sorry futurists, think this is the beginning of the future of entertainment. Film and game as one. Fully immersive VR and fully personalised stories where we control the direction of multi-branching plots. The Complex isn’t all the way there, but then it’s not trying to be.

Instead, The Complex offers a fun and engaging personalised movie experience, and demands the attention and immersion of the player in its decision-making interactive elements. Its budget is small, so set your expectations accordingly, but if you’re in withdrawal after Bandersnatch and need another hit of choose-your-own-adventure, you can’t go too wrong with this, while we wait for the film and games industries to catch up.

The Complex is available now on PS4, Xbox One (reviewed), Nintendo Switch, PC and Mac.

1 thought on “The Complex Review – Game or Movie, You Decide”