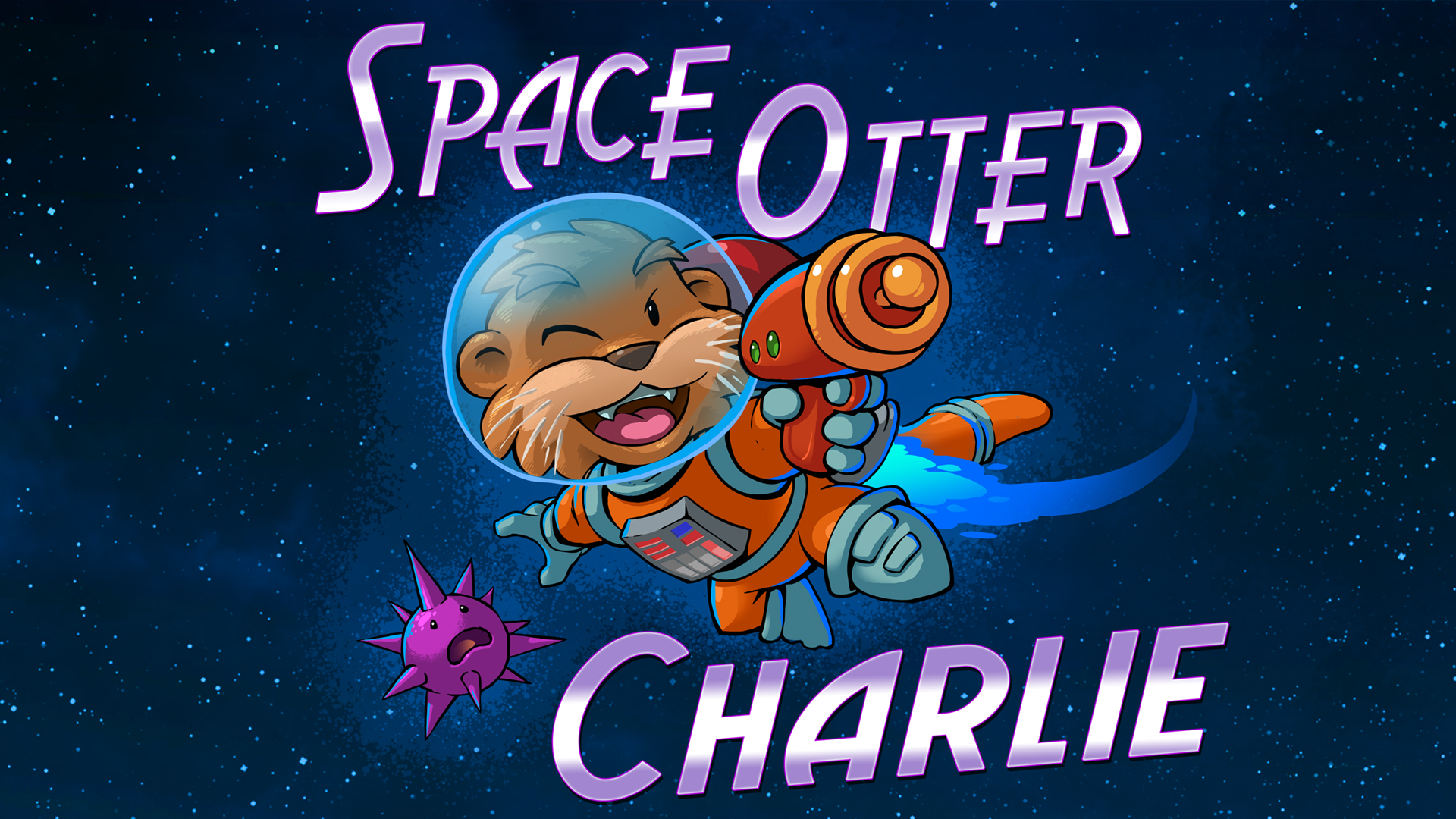 A charismatic, enjoyable and well-designed adventure, Space Otter Charlie is a reminder of the “good ol’ days”. The Finger Guns Review.

The first thing you’ll notice about Space Otter Charlie is how arrestingly charming it is. From the cast of aquatic heroes to the nefarious villains you’ll meet in this adventure, there are a lot of colourful characters. Set in the future after humanity has abandoned planet Earth due to global warming, the aquatic life that was left behind are now making their own way into space to search for a new home planet. Along with his team – Ada and Jesse – Space Otter Charlie heads out into the unknown where he’ll encounter aggressive AI’s, space ghosts, gelatinous alien beings and more in the search for somewhere to settle. It’s a light hearted and endearing scenario to play through. I should have expected as much from developers Wayward Distractions, a team full of PopCap veterans that previously worked on classics such as Plants vs Zombies, Peggle 2 and Feeding Frenzy.

The comparison to PopCap’s Feeding Frenzy is not incidental and not just because they both have an oceanic cast. Space Otter Charlie is a 2D action adventure game set in space and as such the titular character’s traversal is based around zero-g and momentum. The protagonist is essentially swimming through space. Charlie is equipped with magnetic boots which will stick him any surface he lands on. To manoeuvre through each level, he must jump from surface to surface. Once he’s detached from a surface, Charlie can also be propelled via a limited use jetpack. Like an after touch on your leaps, this jetpack initially helps Charlie correct his glide between landing points. As your progress through the game and the jetpack gets upgraded, it becomes more actively involved in traversal. Space Otter Charlie has also learned a trick from one of his mammal brethren; Land on a curved surface at an angle and Charlie can glide along the surface, carrying the momentum with him – just like Sonic the Hedgehog.

In terms of design, Space Otter Charlie isn’t bringing anything new to the genre. There’s hazards to avoid, switches to press and doors to open. What does make this game stand out from the pack is the way it’s all put together. From start to finish, there feels like a well structured layering of mechanics. The difficulty ramps up gradually as the obstacles become more treacherous to avoid and success comes at slimmer margins. For example – A hazard you previously overcome is now electrified with a button timer that gives you a fine window to slip through. While none of this is unique to this game, the traversal mechanics do make them feel fresh.

This is coupled with 360 degree combat against an array of robots, ghosts, aliens and defence systems. There’s a whiff of single stick shooter in Space Otter Charlie, blasting off weapons in whichever direction you’re pointing the right stick in. Avoiding projectiles while replying with your own laser fire can be a little tricky at first as both the jump direction and aiming reticule are controlled by the same thumb stick. I lost count of the number of times I leapt Otter nose first into a harmful green blob that was flying in Charlie’s direction when I was actually trying to fire my laser at an enemy. Thankfully Charlie is pretty robust with a shield that can be restocked with collectables found around each level and dropped by defeated foes.

There’s a number of mild physics puzzles to overcome in Space Otter Charlie too. Most of these are quite ingenious, asking the player to take stock of the environment in order to overcome them. Eye-like cameras with vision cones monitor corridors but these can be covered with crates with a few pushes. Bubble jets force the protagonist around but these can be blocked by boxes too. In one puzzle, a button activates lasers which must line up with platforms that flip when Charlie lands on them. At first glance, it looks impossible to line up these lasers because you’ve got to flip one platform to correct another but a bit of exploration will provide a solution.

Exploration is one of the strongest elements of Space Otter Charlie. There’s a short golden path you can swim through this game which will take you from start to finish but there’s lots to explore off the beaten path. This applies to within each level, with optional areas you can venture into as well as separate, standalone side missions. There’s an excellent risk and reward to a lot of these optional sections. They’re usually more difficult than the straightforward path through the game but at the end of each there are blue prints for weapon upgrades, new cosmetic outfits, resources and text logs which explain more of the lore in the game. This all plays into the element of crafting in Space Otter Charlie. Optional weaponry and costumes can be built at building robots but you’ll need to provide the resources to do so. Some raw materials are rare and you’ll need to play side missions in order to earn them.

Space Otter Charlie also borrows a tried and tested Zelda formula for its structure. You’ll start a level looking for a particular power-up, find it and then have to use it to exit a level and overcome a boss battle. Ricochet lasers that bounce down holes Charlie can’t access in order to activate switches, for example. You’ll have to use this weapon later in an offensive capacity when taking on a boss that can’t be shot directly. In one mission you’ll build a missile launcher which can destroy rocks that block the path forward – plus it’s very handy in combat. Later you’ll get a spin shot which can propel Charlie through dangers which would have otherwise hurt him.

The aforementioned boss battles are a particular highlight of Space Otter Charlie. None of them can be tackled head on and each needs a unique strategy to defeat. They’re never overly difficult but it might take a little trial and error to discover the correct tactics to use.

It’s the wit and humour of Space Otter Charlie which make it memorable however. The banter between Charlie and his crew is sharp and full of quips. There’s an irreverence to their situation at times – bumbling through space going from one problem to the next – and a family friendly, light hearted tone to it all. Despite having no voice acting, my 8 year old chuckled at some of the jokes. That’s quite a feat for a game given the fact my 8 year old normally turns off a game as soon as it asks him to read anything. One particular highlight is when conversing with a giant ghost head which has a Scottish accent and is written as such but is translated as if it was a foreign dialect.

It’s a shame then that Space Otter Charlie has a few rough edges that dampen the experience. It’s a lot of simple stuff that are far from game breaking alone but start to get irritating when they’re all piled up. There are conversations which happen whenever you enter a room – but if you die, you’ll have to repeat the conversation again, including prior to a boss battle that’ll likely kill you off a few times. All of the doorways are activated when you pass into them; When you re-emerge in the other area, if you jump to a wall close to the door, you’ll accidentally re-enter the doorway and pass back through it. Many of the flame traps only start to spout out an arc of fire when they enter the screen, as if they’re off until you approach. This becomes an issue when you enter a screen quickly and end up too close to a trap that offered no danger until it’s too late. The camera will attempt to keep all of the action on the screen but in some instances, it zooms out and struggles, which can make the whole scene difficult to read.

Then there’s the 4 player multiplayer modes. I’ll be honest, I played each of the 2 game play modes with my kids once. They make good use of the core mechanics of Space Otter Charlie but they’re not going to be replacing Smash Bro’s as a go-to party favourite any time soon.

Despite a few niggles, Space Otter Charlie is a delightful, creative and fun game. There’s so many old school influences shining through here – a splash of family friendly Conkers humour, a structure similar to classic Zelda, traversal that feels like a modern day take on the Spectrum classic Jet Pac – that this game reminds me of the ‘good ol’ days’. If you’re in the mood for an old school action platformer game that benefits from modern day games design, this is the one.

Space Otter Charlie is launching on the 18th of March, 2021 for the PlayStation 4 (review platform), Xbox One, Nintendo Switch and PC.

JRPG Cult Classic The World Ends With You Is Getting A Sequel In 2021
Desperados III (PS4) Review – The Quick-Save & The Dead
Ripstone's Pure Pool coming to Switch this November.