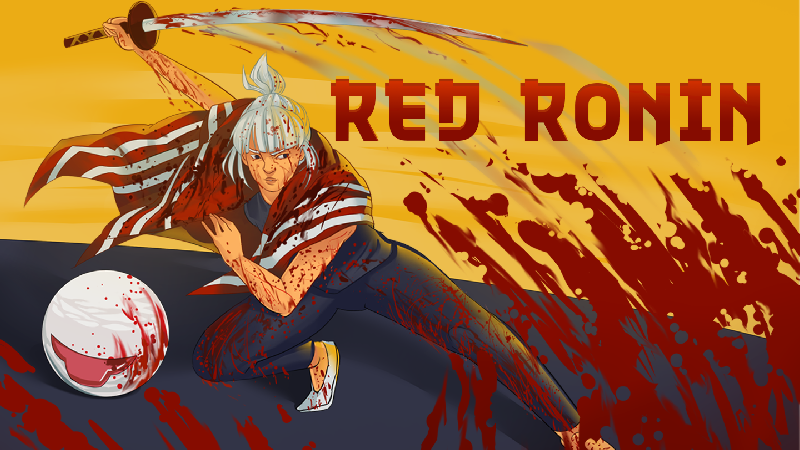 Red Ronin is ice block puzzles reinvented with ninja and revenge! Sounds cool, but is it a genre best left buried, or an inspired return? The Finger Guns review:

You know those ice-block puzzle games that have been around for decades? The ones where you slide a block or your avatar across some ice and they can only stop when they hit a wall or an obstacle? You have to solve the puzzle or exit the room using only the sliding move. You can’t stop, you can’t change direction, you just have to work out the puzzle. Well, now imagine that someone took that ice-block puzzle mechanic and added a ninja and a Hotline Miami/Katana Zero story to it. That’s Red Ronin.

It’s a pretty inspired idea. Who knew there was life in the old ice-block puzzle yet? Well, if you add a ninja, you can make anything cool right? Even ice block puzzles.

So instead of an ice-block, in Red Ronin you play as a red-caped ninja. A very fast and very straight ninja. Sorry, I mean one who can only fight in straight lines. Red is on a mission of vengeance (aren’t they always?). A job gone bad, her team bailed, Red was left in the hands of the enemy to be imprisoned and tortured. She has a powerful vendetta to exact. The game follows a structure akin to Kill Bill complete with chapters (and the katana I suppose); four targets who left you for dead, each one you find and kill leading to the next, and each involving a dozen levels of carnage to reach. There’s also a few tough flashback sections in between each section that detail the job where things went south.

In between each chapter, you go back to your apartment and reflect on the day’s killing, but unlike Hotline Miami, Red Ronin is less introspective and more plotted. What’s fun is the first time back in your apartment Red can actually just walk around normally without sliding everywhere – it’s her pad right, she can relax. It’s a serviceable story that does enough to keep you moving. It’s also the biggest story ever attached to an ice-block puzzle game.

Every level in Red Ronin is one of those block puzzles, but with a number of enemies to kill spread across the room. You can move in straight lines, like the aforementioned ice-block, and the enemies can move one square at a time each time you do so. If you slide straight into them then it’s slice and dice time and bodies hit the floor. However if you come to a stop next to them, or their one-square-move brings them next to you, then its lights out, they slice first.

To make it more interesting, you have a few power-ups supplied by your trusty AI drone, Isaac. He can stop time for a turn, giving you one crucial extra slide before enemies move, or place a direction-changer on the floor, for lightning-fast cornering straight into a slash.

It is turn-based, because each time you move, the enemy can move, but it doesn’t feel turn-based, it feels like every move you make is an inexorable slide towards victory or oblivion, the enemies creeping ever closer, like you are the centre of a black-hole drawing them in.

If you’ve played Katana Zero or Hotline Miami, this has a similar feel although it is more rigid in its gameplay loop. It has the same lightning-fast gore, one-versus-a-dozen feel, one-hit kills, and existential murder narrative. It’s just this time you’re an ice-block with a katana.

The first set of flashback levels change up the gameplay by removing the slashing and replacing it with stealth. Now you need to slide all over the room, enemies moving every turn, and stay completely out of sight throughout. These are tougher as there are only so many moves that will get you across the room. The fact that every level has a pretty much perfect way of doing it can take away from the freedom, but if the search for the elusive perfect move-sequence appeals to you, the trial and error is more fun than frustrating.

After that each new chapter brings a new enemy mechanic; whether it be bots that track you, enemies that take two passes to kill, one katana-deflection per level, or a single helpful sniper shot, each chapter changes up the gameplay and then lets you experiment with it for a dozen levels.

Bosses are also kind of inspired, flitting about the room, trying to stay one step away from your deadly straight line dashes, and filling the screen with their own weapons. Making a boss fight out of an ice-block puzzle feels kind of awesome.

Graphics-wise Red Ronin is a simple pixel world, and not especially detailed. There was probably space to ramp up the graphics and make something beautiful, but it’s a game that has little need for graphics over and above the functional. Anything more would spoil the pixel pop of the whole thing and probably end up meaning the game cost more to make and sell, throwing off that sweet spot ratio it’s got going for it.

It’s a game that instead relies on its puzzles and atmosphere to carry it. Hotline Miami proved you didn’t need anything but the absolute basics to make gameplay king, and Red Ronin has taken that lesson to heart.

Red Ronin does suffer from having a pretty punishing and frustrating save function. You are unable to save during the dozen or so levels that make up each section – the game only autosaves after each boss or chapter is complete. That can mean that if you are stuck on a level and want to go away and come back, you are forced to leave the game on, or forfeit your progress through up to a dozen levels. This seems counter-productive.

The game does not encourage a quick plug-and-play attitude, and were it to make it to Switch in future, this system would be an impediment to the handheld gaming format. As it was, when I wanted a break, I had to leave a warm PC running for ages while I went to do something else and came back with a fresh brain. I don’t see why progression through the levels couldn’t save – it was certainly saving and recording the amount of times I’d died.

Red Ronin features some really funky and well-made retro gaming themes, and though very repetitive, they are of the type that can easily wash over you, or be listened to on repeat for a good long while. The vaporwave in the hub apartment between chapters was especially nice. That said, the same theme plays for almost the entirety of each chapter and that can run long.

I did encounter a sound issue or two, sound dropping out, and then not coming back until I reloaded the game, or disappearing after I changed out speakers for headphones. With the aforementioned saving issue, there was no way of sorting the sound out, because I couldn’t stop the game and pick up where I left off. I had to progress all the way too, and then complete a boss, let the game autosave, and then quit and reload to get the tunes back.

Red Ronin is a brilliant small-scale idea, carried off with razor-edge sharpness. Reinvent the ice block puzzle gameplay loop, remake it into something new and exciting. Give it a story, give it a ninja and you’re on to a winner. Its tightly focused and satisfying to play, demands your concentration and your brain. It’s a shame that the graphics are a little on the basic side, there are a few technical issues and a save function that is more punishing than necessary.

A satisfying reimagining of the classic ice-block puzzle with ninja and a revenge narrative, Red Ronin adds a slew of interesting takes on a formula thought exhausted. It’s tightly designed and demands your concentration. Revenge is a dish best served ice cold.