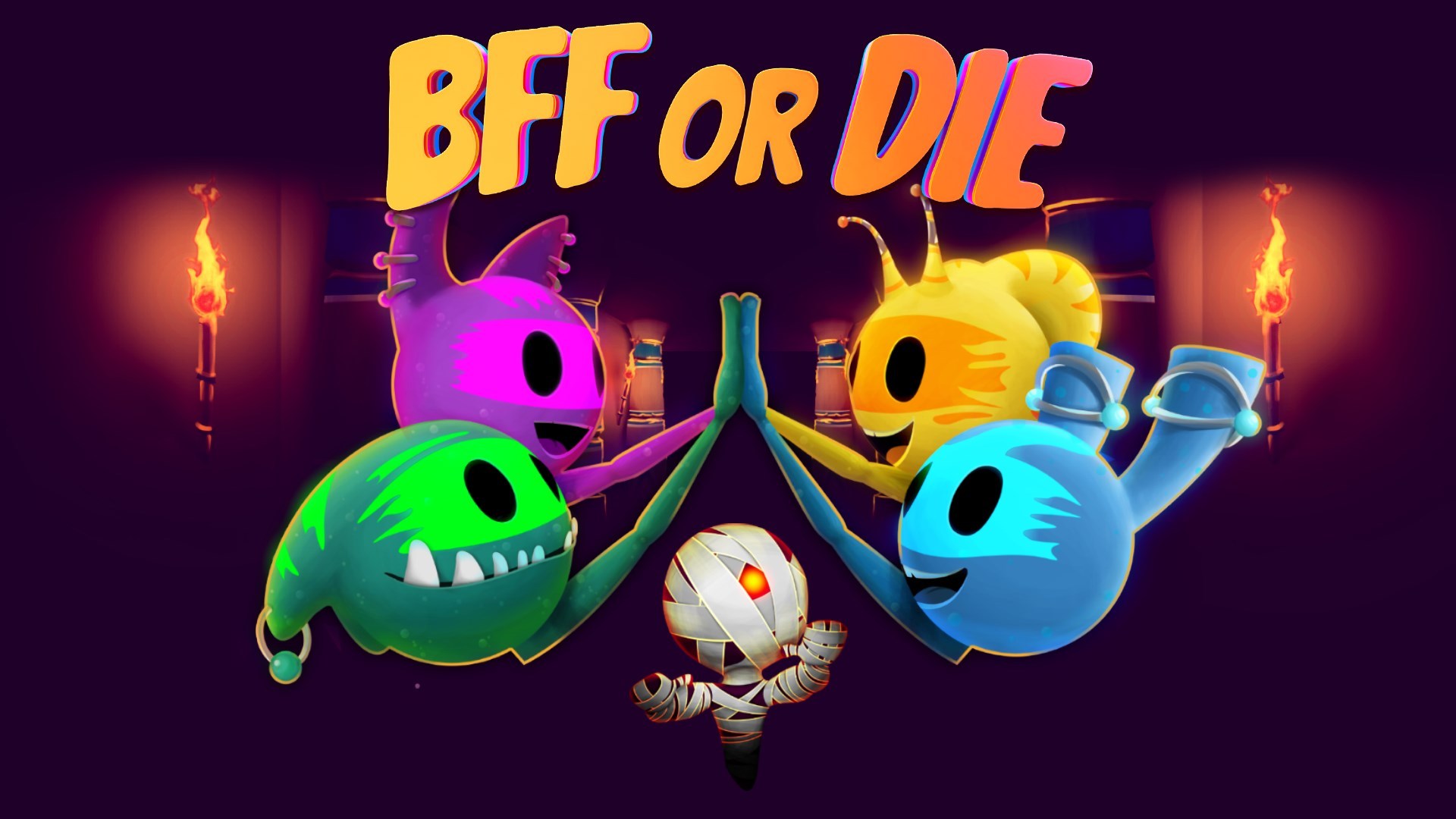 A puzzle party game that hinges on collaboration, BFF or Die is a hilarious but occasionally frustrating experience. The Finger Guns Review.

A puzzle party game that hinges on collaboration, BFF or Die is a hilarious but occasionally frustrating experience. The Finger Guns Review.

The first time I played BFF or Die was at a video game show. I was wandering the show floor alone when I saw this colourful game with a group gathered around it. Laughter occasionally crackled through the crowd like lightning. I watched it being played over a few shoulders until a space opened up to try it for myself, sitting next to a complete stranger. On the surface, it looked akin to every other co-op party game but then developer Shaz explained the unique kicker to me – this stranger and I would be using the same controller. I used my right hand to use the left thumb stick and my mystery partner – who I came to know as Alex – used his left hand to hold the right side of the pad. Each stick controlled a character independently and we attempted to work together on the same pad to collect symbols and avoid mummies. Within a few moments, Alex and I were laughing, talking through strategies and high five’ing each victory. The goofy nature of how this game had to be controlled – 2 people per controller – was a perfect ice breaker and I imagined it would be even better played with friends and family.

That was in 2018 and in the intervening time, BFF or Die had finished development and launched on Steam. I’d missed the PC launch because at that time, my PC was barely able to run Google Chrome, never mind a game of any kind. 2 years on and ASA Studio’s co-op puzzle game is making the leap to consoles thanks to publisher 2Awesome Studio. While BFF or Die has lost a little of its uniqueness over the past 2 years, it’s still a fun game to play in pairs.

In BFF or Die, you play as a quartet of time travelling aliens that have just graduated from the prestigious Intergalactic Time Academy. The beings that power their time travelling technology – The Orbee’s – have escaped and are now lost in time. One time period in particular – Ancient Egypt. The intergalactic crew travel back to the time of Mummies, pyramids and pharaohs in order to recover them and find out why the Orbee’s chose this time period to travel too.

BFF Or Die can be played in single or upto 4 player local multiplayer and the game changes slightly to accomodate how many players are active. Unlike the version I played back in 2018, each character is controlled with their own controller. Each of the game’s 30 main levels, enclosed in a tomb, have a singular aim: collect all of the Orbee’s that are placed around the room. That’s easier said than done because each challenge room has Mummies that can home in on you, obstacles, puzzles and perhaps a distinct lack of lighting that needs to be navigated.

This is where the team work comes in. At the bottom of the screen in every level is the time machine that enables players to use 4 different tools – a flash light which illuminates part of the level, a crane which can pick up other players or Mummies and drop them elsewhere, a projectile which can temporarily draw Mummies towards a drone and a drone launcher which changes the location of the beacon which the mummies are drawn too. These tools are introduced into the game gradually over the first 13 levels and their use form the core mechanics in the game.

Some levels are pitch black and contain a maze that stands between the aliens and the Orbee’s. In this instance, one player has to direct a beam of light from the time machine while another navigates the maze that would be hidden otherwise. In other levels, a number of mummies roam around the level freely and players need to coordinate the use of the drones to keep each other safe. In some levels, the Orbee’s are trapped in walled off sections so one player needs to use the crane to lift another player into the compartment. There’s some smart and inspired design here that requires collaboration and demands communication between the players in order to overcome. Like the best multiplayer party games, BFF or Die is as much about what you do off the screen as you do on it and it makes for some chaotic but hilarious play time. Played alone, this game is far less entertaining but I’m glad the single player levels exist, if only to extend the longevity of it.

A handful of the levels forget to be fun, however. For example, in one level there’s a whole horde of mummies running around and it’s just far too stressful to manage the drones, the lighting and the beacon at the same time to be enjoyable. This is a multiplayer game that’s meant to be played by gamers too. Playing with my partner who’s not the biggest gamer but was wooed by the cute BFF or Die visuals found some levels deceptively difficult to play.

Thankfully, the light hearted and periodically comical story proves for a decent incentive to push through those few frustrations. While it has no real depth (and I mean, why would it? It’s a party puzzle game), the narrative which is delivered via conversations at the start of each level has enough laughs to help the 3 hour long mystery of the Orbee’s unfold.

Once you’ve completed the 30 story missions, an endless mode is then unlocked which allows players to play through randomly served BBF or Die levels till the cows come home. This gives the game a lot of post-game for those that have enjoyed everything up to that point. There’s some real head scratchers in the mix during this mode and my family and I have come across very few duds.

I’d be lying if I wasn’t disappointed that the uniqueness on display in the BFF or Die version I played 2 years ago, having two players use one controller, had been removed for the console version. By the looks of the Steam page, it certainly looks like that still exists in the PC version of the game but all mention of it seems to be missing in the PS4 version. Sure, it’s still feasible to play it with 2 players using 1 controller in the 1 player mode but because the game changes depending on the number of players active, some of the more interesting puzzles would be simplified. The reason that was so fun was that at the end of each level, in order to move on to the next, the extra-terrestrial team have to come together and high 5. The in-gaming high-5’s still exist and by having that as part of the game play, and pairing up to use the same controller putting the players in the perfect high-5’ing distance to do the same, seemed novel and pretty ingenious. Now, as I sit across the room from my partner and children, BFF or Die feels like any other multiplayer game. Maybe it didn’t work in practice come the full release. Maybe aliens from the future have been taught about social distant. Either way, it’s a shame that that aspect doesn’t exist here or that it couldn’t be made to work.

This doesn’t mean BFF or Die isn’t imaginative. This is a game that leverages co-operation into a satisfying game play cycle better than just about any party game I’ve played this year. If you’re about to spend the festive season in-doors with your game playing family and want something to keep everyone occupied so that no one brings up the state of politics, BFF or Die steps up to the plate and delivers. It’s a game that shines when played with a group that really want to get into it but played solo or with inexperienced gamers and it falls flat.

While it has lost some of its uniqueness in the 2 years since it launched on PC, BFF or Die still has the capability of lighting up an evening with friends on PS4. 1-4 player co-op puzzles that are more to do with your group dynamic than what’s happening on screen deliver equal doses of hilarity and chaos despite a few frustrating levels. This one would be perfect for a gaming group or as part of a playlist of party games sandwiched between Gang Beasts and a Jackbox game.

BFF or Die is available now on PS4 ( reviewed on a standard PS4), Xbox One, Nintendo Switch and PC.