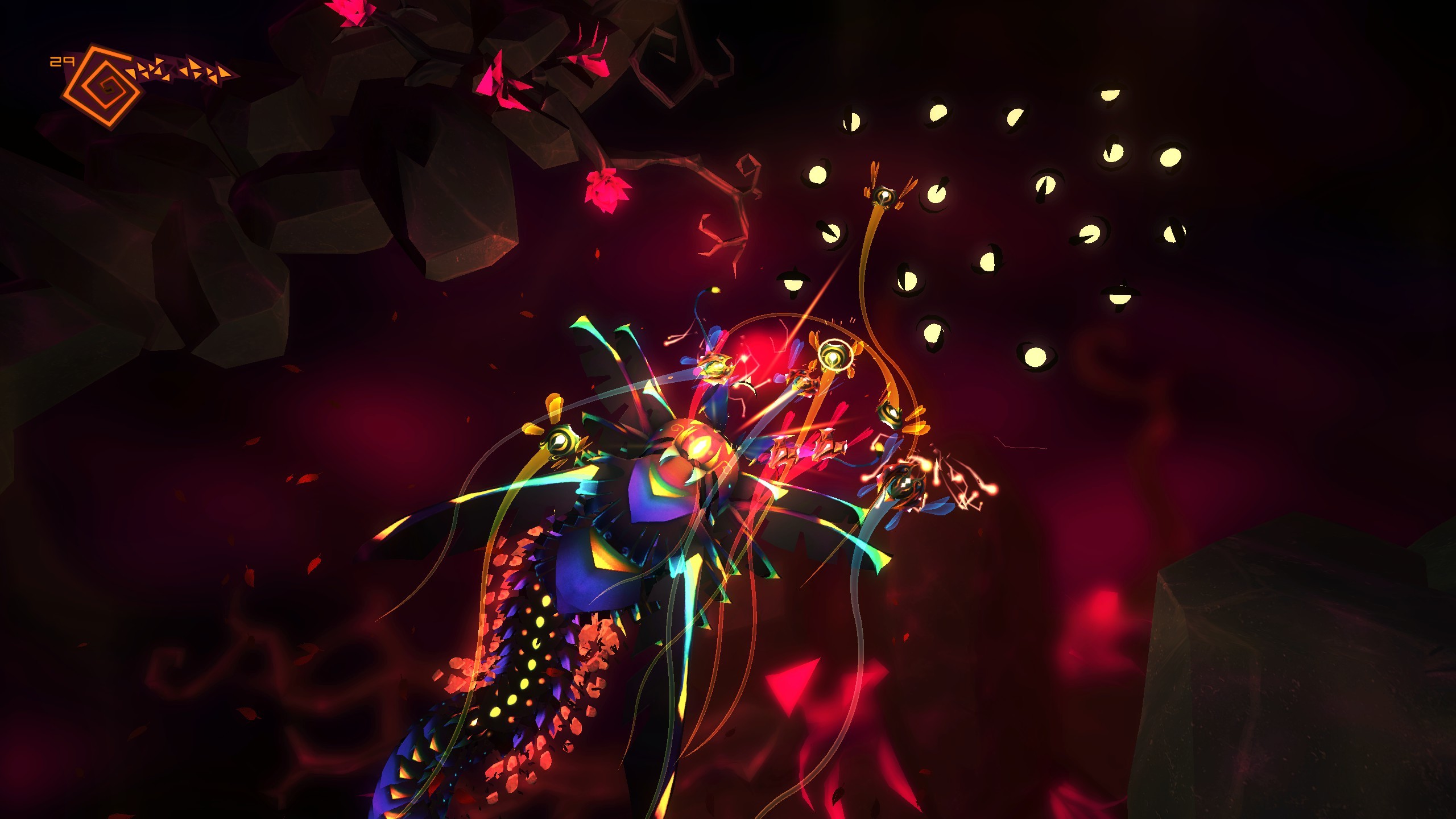 Like a leisurely Geometry Wars, Sparkle 4 Tales is beautiful but benign. The Finger Guns Review.

Like a leisurely Geometry Wars, Sparkle 4 Tales is beautiful but benign. The Finger Guns Review.

Making its debut on the Xbox platform, Sparkle 4 Tales is the fourth instalment in Forever Entertainment’s Sparkle series, a franchise about micro-organisms and growth. Probably best summarised as a top-down exploration game with some very light combat mechanics, it sees you take control of a Sparkle of Life, a tiny living organism, tasked with nothing more than finding a way to grow.

To begin with, this involves nothing more than swimming around primordial waters and looking for things to eat. Do that often enough and – surprise, surprise – you’ll grow a little bigger (…oh, grow up). As you do, and you gradually become a more powerful entity, the game then begins to open up a little more, introducing some light story elements, fed to you by your invisible guide, The Creator.

As you progress through the game, growing ever more powerful, you’ll soon be joined by a group of allies – fellow organisms that will help you to scoop up more things to eat, whilst also serving as something of a moving shield, as you begin to encounter bad organisms that represent the game’s big bad – The Void.

These encounters serve as one of the game’s big setpieces, but are very simple in execution. You and your army are tasked with attempting to vanquish a number of large boss organisms – you do this by using your drones to stun them, before you then ram them to cause damage. They’re not overly taxing though, which is very much in keeping with the overall vibe, but I did find myself wishing they presented more of a challenge than they do.

The game’s other big setpieces are short into-the-screen sections, which reminded me of the bonus stages from Sonic The Hedgehog 2, oddly enough. You have to navigate fast-moving and narrow tunnel-like arenas in which you gather orbs that help you to power up. They serve as a nice change of pace from the more deliberate feel of the main game, and I’d have liked to have seen a few more parts that mixed up the gameplay like this.

Now, if this all sounds a little dry, that’s because – for the most part – it unfortunately is. Partly because of its gentle pace and partly because of the vague, nebulous nature of its story, Sparkle 4 Tales is a game that often feels like it’s not really going anywhere. There’s nothing inherently wrong with that, but when you give your game a suffix like Tales, it just feels like it should have more in the way of purpose.

As a result, almost all of the appeal to Sparkle 4 Tales is of an aesthetic nature. It’s actually a very nice looking game, with particularly pretty models for all of the organisms, which quickly grow into elaborate, colourful, almost butterfly-like creatures, serving as a nice contrast to the more muted tones of the play area.

In some ways, it almost feels like a music visualiser with some gameplay elements tacked on. And, to be very clear, that is not a universally bad thing – I’ve been a fan of music visualisers since the original Playstation days – and I’d be lying if I said there weren’t parts of Sparkle 4 Tales that gave me little micro doses of dopamine at times.

The soundtrack, for example, is excellent. The whole thing has a kind of chill and New Earth-y vibe for the most part – all melancholy string and ethereal piano – with occasional moments of dread and foreboding (although, if I’m being honest, those moments of musical suspense were rarely ever quite matched by what was happening on the screen). Similarly, the sound effects are very pleasant, especially those that pop as you collect the various pieces of ephemera dotted around the world.

However, ultimately, this is a game and has to be judged as such. Sadly, this is where Sparkle 4 Tales falls down. If the story was a little more engaging, if the gameplay evolved more than it does through its runtime, if the stakes felt a little higher? Maybe there would be enough here to justify the outlay. As it is, it’s a title that’s difficult to recommend, especially if you’ve played any of its predecessors, because it’ll all begin to feel a little too familiar a little too quickly.

Controlling like a more leisurely-paced Geometry Wars, Sparkle 4 Tales is a languid affair which could have used a little more focus and drive to make it something you’ll want to stick with until the end. As it is, it’s an aesthetically pleasant experience that I struggled to care about after the first thirty minutes.

Sparkle 4 Tales is available now on Xbox One (reviewed on an Xbox Series S via Backwards Comparability), Nintendo Switch and PC.