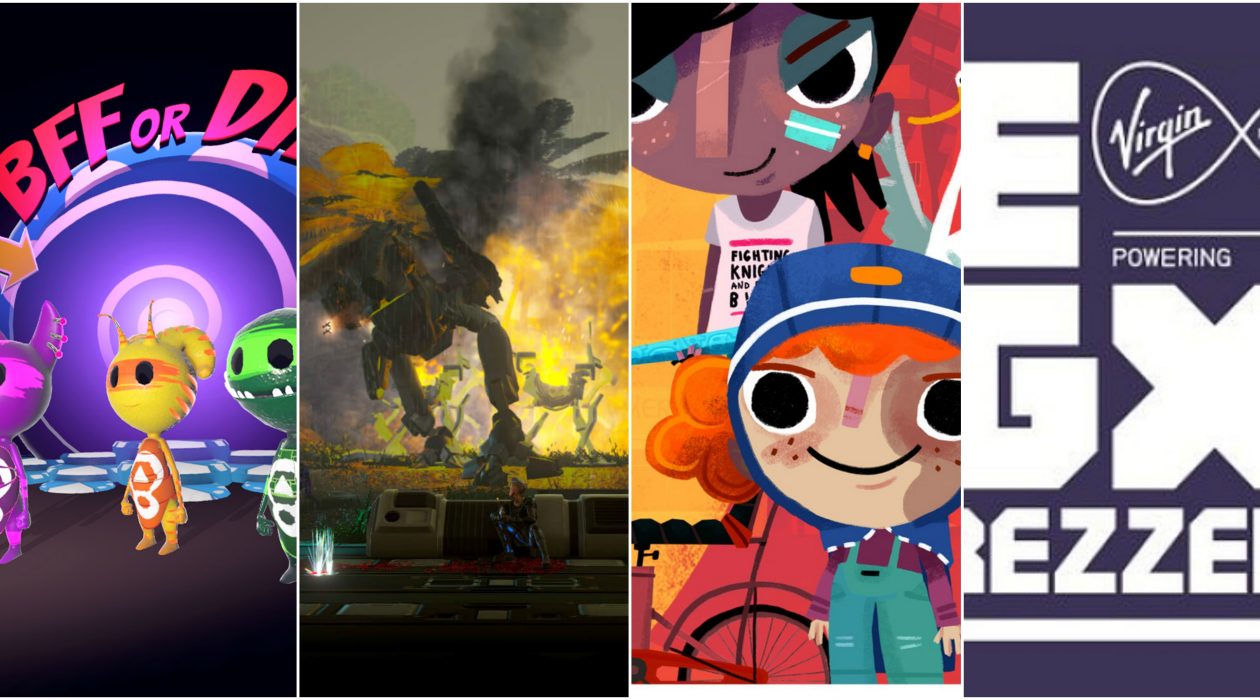 Part Five of our EGX Rezzed hands-on previews looks at BFF or Die from Honey Tribe, Hollowpoint from Red Kite and Foam Sword’s Knights and Bikes.v

Part Five of our EGX Rezzed hands-on previews looks at BFF or Die from Honey Tribe, Hollowpoint from Red Kite and Foam Sword’s Knights and Bikes.

Couch co-op has been coming back in a big way these past few years and BFF or Die is set to continue this trend. In the game you play as a group of 4 aliens that go for a joy ride in a time machine and end up stuck in ancient Egypt. To get back home, they must collect items, unlock new gadgets and, most importantly, work together to escape ghosts and mummies. The kicker with BFF or Die is that it has to be played on the same game pad. During my demonstration, I played with the right side of a game pad (using the right stick to move my alien and the trigger to activate things) while my co-op partner took the left side of the pad (using the same control options but as a mirror image). Even though my compatriot was a complete stranger, if was fun to get so up close and personal, using the same control pad to try to work together. The general premise of the levels I played were to collect a series items, avoiding mummy’s that were roaming the area and once we’d collected them all, come together with my partner to “high 5” and end the level. That might sound simple but it’s actually intense. Some of the levels have a series of walls that allow you to get some distance between you and the mummies that are hunting you but at random intervals, the walls can drop. The step up in tension when a wall drops, the mummy closes in on you and you’re heading into a dead end was excellent. The game also stops you from being a smart arse. Later in the demo, I was allowed to use a grabber which is claw you can use to pick up and drop other players or enemies. In that level there were 4 mummy’s roaming around and I thought I’d be smart by picking them all up and dropping them in to an enclosed square of wall. Nope. As soon as I dropped that final mummy into the pen ALL OF THE WALLS dropped. This left my co-op partner, who was mid-way through collecting the required pickups, in a spot of bother. I apologised profusely.

BFF or Die is also very approachable and suitable for all ages. The art style has a Pixar/Dreamworks look about it, the writing and dialogue is easy to understand and the mechanics have been implemented in a way which allows what could have been a convoluted control input to be uncompromised in its vision and simple to use. Sitting there, playing this game with a stranger, I couldn’t wait to get this game into the hands of my kids because I imagine they’ll enjoy it as much as I did. BFF or Die is almost “content complete” and will be releasing on PC and possibly a console or 2 this year.

Those eagle eyed readers out there might recognise Hollowpoint as it was originally announced by Paradox Interactive back in 2014. The game has had a troubled path through development since then but it is now in the safe hands of Red Kite games, a team with extensive game development experience ranging from Grand Theft Auto to Call of Duty who are certainly doing the premise justice. Speaking to the creative director David Roberts, he said “We’ve acquired the IP and we’re making the version of Hollowpoint that we want to make. It’s still the same idea – 3 corporate factions fighting for control of the world and paying Hollowpoint operatives to do missions – but this is very much a Red Kite game”.

The demo I played at Rezzed was a horizontal slice of the game set in a highly detailed, rain slick jungle base. I was challenged to get in, destroy some generators, steal some data and get out again. The game is played on a 2D plane allowing you to move left and right but, much like Dynamighty’s Counter Spy, is set in a 3D environment with enemies appearing in the depth of the background who are able to move freely in that space. I was equipped with a gun and with the right stick, you point out the enemy in the background (or on your 2D plane should they make it that far) and a target reticule locks too them. Popping in and out of cover, you can then shoot them with the controller trigger buttons. Even in a horizontal slice of this game, everything felt right. The gun play, the small amount of platforming, the UI, it all felt slick and well implemented.

The most impressive element of Hollowpoint is how cinematic and immersive it felt. Early on in the mission, when I’d yet to encounter any enemies, a giant mech stomped through the background of the level. I stopped dead still until it passed me by (I’m not sure if it would have seen me but I wasn’t taking any chances) and thought to myself “phew. Close one”. This was actually a moment of foreshadowing because, once I’d rattled the hornets’ nest of the base, the mech descended on me towards the end of the level causing me to audibly say “ah, hell no”. There was a feeling on JRPG boss battle here, having to shoot off each part of the mech before hacking a turret and gunning down a drop ship. There’s a lot going on on-screen and all of it feels purpose built.

While Hollowpoint still feels like it’s early in development, this initial hands on was promising and the passion the developers showed for the game was plain to see at EGX Rezzed. They’ve got big plans for the game with more environments, more mission types (assassinations and stealth thefts were 2 types mentioned) and an overarching mechanic which effects which of the mega-corporations warm/become wary of you depending on who you work for and what types of missions you pick to complete. Hollowpoint might have been through a tough time in the past but now it’s certainly moving in the right direction now.

Disclaimer: I’m a Kickstarter backer of Knights and Bikes. And why wouldn’t I be? I fell in love with the pitch that ex-Media Moleculers Foam Sword made way back in 2016 – the idea of giving childlike play time a visual realisation hit me right in the feels as a parent – and it was so pleasing to see that come together during the demo at EGX Rezzed. Playing in co-op with a complete stranger, we even got into the spirit of things, making up our own bike races across the stunning beach environment and in the junkyard.

That’s the magic of Knights and Bikes. It transports you back to your childhood when a stick was a sword, a bike was your noble steed and the floor was lava. At one point in the game, we had to use the wizards tower (a crane) to lift our bikes over a fence. Later, we bashed an enemy into the maw of a dragon (a car crusher). This is a game that blends imagination and reality in such a charming yet real way that I gave myself face ache from smiling and laughing so much.

We did manage to break the game at one point – we swung a buoy from the crane so fast that it somehow managed to land on the land which meant we couldn’t pick it back up again and had to restart the demo (This bug has now been found and crushed) – but it was easy to forget that Knights and Bikes is still in development (and these things can be ironed out) because it looks so damn polished. The art style, the interactivity with the world (hugging a goose is a life affirming moment), the conversations between the pair of protagonists – it all felt so finished, so complete, so lovable. Playing Knights and Bikes at Rezzed gave me a feeling of satisfaction that I’ve rarely felt from playing a show floor demo and I’m very much looking forward to the finished product and the begging my wife to play it with me.