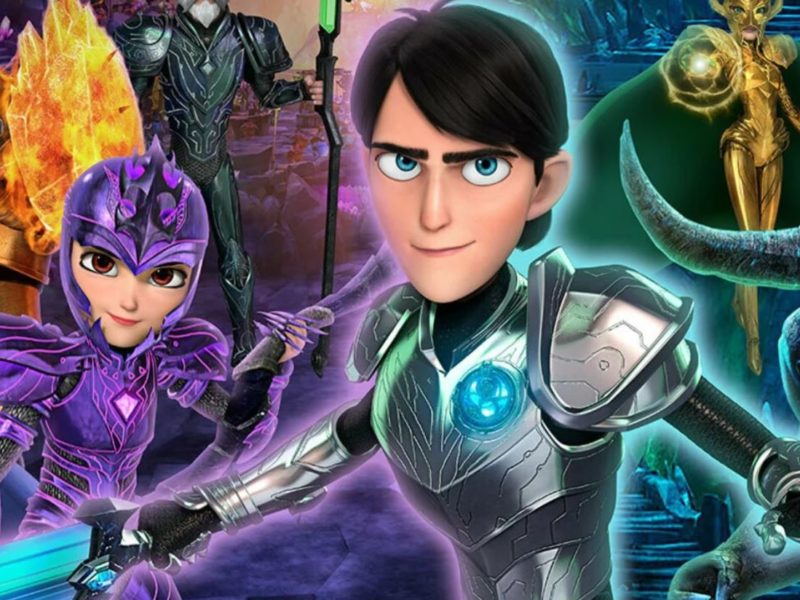 A poor interpretation of the celebrated animated series, Trollhunters: Defenders of Arcadia struggles with bugs and bland design. The Finger Guns Review.

Picking up a game developed by WayForward is a bit of a gamble these days. For every excellent Shantae: Half-Genie Hero, we get a half-baked licensed game like Goosebumps: The Game. Unfortunately, Trollhunters: Defenders of Arcadia, a 2.5D (3D characters played along a 2D slice of the game world) hack and slash game, falls into the latter category. An original story set in the shared world of Trollhunters, Wizards and 3Below, this game lacks the spark of the animated shows, struggling to adapt what made them great into a cohesive experience worth playing. Heads-up – If you’ve not watched the TV show recently, there’s some mild spoilers ahead.

Trollhunters: Defenders of Arcadia begins somewhere between Jim’s transformation into his half-troll form and before the events leading into the Wizards TV show. Jim Lake Jr is chilling out in a forest when he’s called by Claire and Toby to let him know that a band of trolls has rolled into Arcadia Oaks and is causing havoc. This new threat is a little different though as they’re all dressed as pirates and led by a Porgon The Trickster, someone you might recognise from 3Below. Porgon is back to his time altering tricks and manages to trap Jimmy in a time loop of Arcadia a year in the past. With Merlin and a future version of Claire and Toby as his guides, Jim and the past version of Claire must chase down Porgon to prevent “the Time-pocalypse”.

One of the aspects of the Trollhunters show that has won over its audience and got it nominated for so many awards is the storytelling. That is almost completely missing from Defenders of Arcadia. Porgon is a 2 dimensional character that has so little personality that it’s difficult to care about fighting him or understanding his aims. He just growls and laughs during all of Jim’s early altercations with him and it takes for Merlin to deliver a tonne of expositions during voice overs to give the game any real story. Instead, you’re treated to a combat filled tour of the famous locations from Trollhunters and 3Below in order to face off against some familiar faces from the series with very little linking the levels together.

The one element of Trollhunters: Defenders of Arcadia that WayForward have got absolutely correct is the aesthetics and character work. The in-game character models look and move just like they do in the TV show with almost all of the voice actors reprising their roles for this game. The backgrounds are reminiscent of the Dreamworks animation creations too. Having a 3D scrolling background gives the iconic locations from the show like Trollmarket and the Darklands visual depth.

That depth unfortunately doesn’t extend to the game or level design itself. Combat in Trollhunters: Defenders of Arcadia is very shallow, primarily involving mashing the melee combat button to pull off one combo repeatedly. As the game progresses, Jim unlocks more attacks like a ranged gauntlet attack and a dashing stab but neither feel any more useful in combat than the basic melee. That’s because the enemy trolls, goblins, aliens, dragons and beyond are so bland to fight against. Almost all of the foes you’ll face do little more than run at Jim brandishing a weapon and it’s simply a matter of waiting until they’re in range and mashing the attack button. Some monsters are armoured and will charge into walls if you evade their attacks and there are some enemies that send harmful waves along the floor – for both of these, simply leaping over their attacks is enough to get close and attack. If you’re keeping on top of buying upgrades for your character, you’ll almost feel invincible and over powered too, removing any challenge from the game.

As for the levels themselves, there’s very rudimentary platforming involved along with some very, very mild puzzle solving involved in getting from the start to finish of each. For the most part you’ll be simply leaping from one moving platform to another, sometimes doing so against a timer. The puzzles are no more interesting; hit a dead end and all you’ve got to do is look around for a switch to push/hit with your ranged attack or call in an assist. These assists come in the form of a new traversal mechanic and are tied to Jim’s allies – Angor Rot (now on your side for…reasons) spawns a static golem which allow you to reach high up platforms, Toby enters the screen and smashes boxes barring your path and Aja & Krel can borrow Jim their flying surfboard in order to cross gaps.

These assists were the cause of the first technical issues with Trollhunters: Defenders of Arcadia. 3 times during play, the ability to switch between the assists just stopped working. Pressing the R1/L1 which would usually cycle through the abilities just stopped functioning. I thought it was my controller at first but the sound effect that usually triggers when the abilities are cycled still chimed in. I had to reset the game each time as this persisted even when heading back to the hub-like Trollmarket. In another bug, a platform that should move from left to right was just static. There’s plenty of harmless bugs in this game too – when equipping an item which gave Jim his human appearance again, a static mirror version of the character appeared.

Even when Trollhunters: Defenders of Arcadia is working, it’s not exactly clear whether it is or not. During one section of the game, when you first reach Trollmarket, the game simply neglects to tell you how to proceed (you need to use the timemap in your inventory).

There’s co-op play in Trollhunters: Defenders of Arcadia (again, how to activate it is left totally unexplained) which spawns Claire in a second on-screen protagonist. Some of the in-game puzzles change with the inclusion of Claire as she can spawn a portal which allows you to get around indestructible walls. The game is mildly more interesting when played in 2-player and it kind of feels like this is the way the game should be played.

Of course, I’m about 25 years outside of the target demographic for Trollhunters: Defenders of Arcadia so you’d be right to get a second opinion. That’s something I did with 3 of my kids. My eldest – 11 years old – enjoyed the boss battles but thought the game was too short. My 7 year old twins, 2 of the biggest Trollhunter fans, got bored with the game before the halfway point and wanted to play something else.

A series as imaginative and as entertaining as Trollhunters deserved a better tie-in video game. Defenders of Arcadia has a few enjoyable moments and it certainly looks the part but uninspired combat, tired level design and a story which feels more like a TV clip show than a cohesive narrative means it falls well short of fan expectations.

Trollhunters: Defenders of Arcadia is available now on PlayStation 4 (reviewed on base PS4), Xbox One, Nintendo Switch and PC.