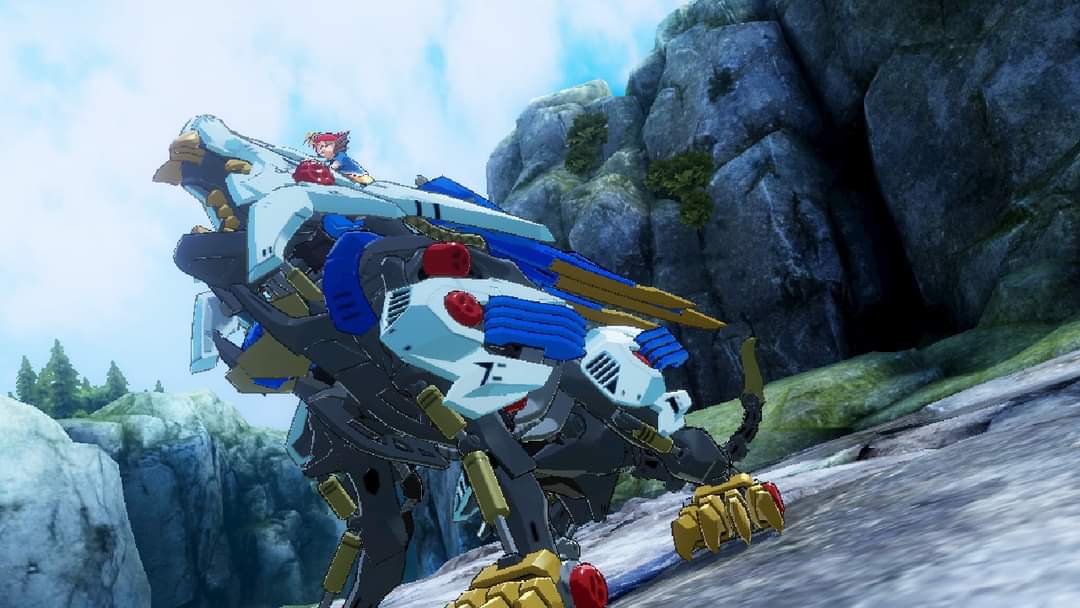 An arena brawler featuring animal based Mecha, Zoids Wild: Blast Unleashed is a fun and entertaining game, even for newcomers to the series. The Finger Guns Review.

An arena brawler featuring animal based Mecha, Zoids Wild: Blast Unleashed is a fun and entertaining game, even for newcomers to the series. The Finger Guns Review.

Let’s just get this out of the way with up front – playing Zoids Wild: Blast Unleashed in order to review it is my first ever interaction with the Zoids franchise. Sure, I’ve been fully aware of the series’ existence – a friend collects the model kits and has glass cabinets full of them – but I’ve never watched an episode of the anime, played any of the previous games or read any of the manga. I came to this game completely cold. My kids thought they knew what Zoids were until 5 minutes of play time later they said “Oh, yeah, this isn’t what I thought it was”. If you’ve arrived at this review looking for a detailed breakdown of how this game is for existing fans, I’m sorry to disappoint. This ain’t it. This is however a review that might be valuable to those in the same position as I was, which is highly likely in the UK as the original anime was difficult to get hold of and Zoids Wild didn’t make it to Netflix on our shores like it did for the US & Canada.

If you’ve come here thinking ‘What even is Zoids Wild: Blast Unleashed anyway?’, you’re in luck. That’s because this game does acknowledge its own niche appeal outside of Japan and does a pretty good job of giving the Cliff Notes on who each character is and what their affiliations are. In this game world, Zoids are massive mecha that resemble animals, dinosaurs, insects and more. The robots can form partnerships with humans (either by choice or under duress) and this is the case with the main cast of Zoids Wild. There’s teams of evil folk who use their Mecha mounts for nefarious means and other noble teams who’re out to do good or find hidden treasures. With their partner riding on their back, the Zoids can go to battle to settle their differences and that’s the premise of this game.

Zoids Wild: Blast Unleashed is an arena brawler that pits two Zoids up against one another in an all out fight. It has all of the typical fighting game tropes – health bars, combo’s, specials, blocks, guard breaks, etc – but instead of fighters, you’re got these giant mechanical beasts going head to head.

Each Zoid in the game has their own play style and special moves but they all retain the same move triggers. There’s 3 types of attack – quick, strong and guard breaker – all of which can be combo’d with their own move type and sometimes linked to other attacks. Holding down L to block, you can also trigger dodges and counter attacks with the same button presses. On top of this, you can also activate 3 types of special move called Wild Action’s. These are triggered by holding down the R trigger and using the 3 attack buttons. These will do extensive damage to your opponent but once used (and even if they miss or are blocked) they need to recharge. Once you’ve dished out enough damage in a fight, you’ll also build up a “beast bond” or “dark blast” (depending on whether the character is good or evil) which can be triggered with a press of both the L & R triggers. This pumps up the damage done by Wild Actions and enables the activation of a Final Blast. Press L & R together again and you’ll launch a massive attack specific to the Zoid type. You only get one of these during each beast bond/dark blast and if you miss or block, you won’t get a retry. The moves and their limited timing force an enjoyable ebb and flow to matches as you try to protect yourself while your opponent is hot or do as much damage as possible while you’re able before the buffs and power moves wear off.

The system that developers Eighting have created here in Zoids Wild: Blast Unleashed lends itself to both novice and skilled players. The move sets for each Zoid have plenty of personality and are easy to pull off which mean that when my 7 year old button mashes, they can still get some satisfaction out of it. There’s deeper play here though for experienced fighting game players. Using the Wild Actions to interrupt incoming attacks, for example, can be tricky to pull off but can totally swing the momentum in a fight.

You won’t need to use any of these high level plays against the games artificial intelligence opponents though. No matter the game mode or CPU level, there’s not much of a challenge to be faced in Zoids Wild: Blast Unleashed. In the Continuous Battle mode, you’ll face off against 7 consecutive foes with a tedious link bringing them together as you move through nodes on a map. The difficulty does increase the further you progress but after each win, you also get to pick a buff to use moving forward so this mode ends up being far from challenging.

You’ll likely spend most of your time with Zoids Wild: Blast Unleashed in the Story mode. Here the central tale of Arashi, the leader of Freedom Force, is searching for a rare subspecies version of the Wild Liger Zoid he rides. This then splinters off into many other tales, all of which are delivered via visual novel-like conversations between characters before and after fights. Some of these are cheesy and others are unnecessarily drawn out – it’s not uncommon to have to fight the allies of a character as ‘practice’ which artificially lengthens all of these narratives – but it’s a pleasant enough collection of stories which introduce you to each character from the Zoids Wild lore and then tells an original story which expands on that base. All told you get to pilot 16 different Zoids over hundreds of fights (which is a pretty massive amount of content that gets very repetitive eventually) as you explore the main threads and side stories which unlock these characters for use in the ‘Battle’ mode.

The Battle mode is where you can throw together a quick battle against the AI or explore the 2 player local multiplayer. Great lengths have been taken to make sure that the game is balanced in multiplayer and you can feel that as you play. The camera keeps both players in view and there’s no disadvantage to being player 2 here.

It’s certainly a shame that there’s no online multiplayer component in Zoids Wild: Blast Unleashed. There’s depth to the game play here that might have taken off in the fighting game community if there was online versus modes of some kind. The arena also feel like a missed opportunity; while there’s 14 different locations to fight in, the only thing that changes is the aesthetics. Fighting in the centre of a volcano offers the same mechanical elements to fighting next to a picturesque waterfall. There’s no ring transition’s, no dangers to avoid or objects to use.

I think it’s fair to say that fans of the anime series will get a lot more out of Zoids Wild: Blast Unleashed than I did. There’s little sound bites from the characters both in the menus and during the conversations in the story mode which I believe feature the English voice cast. The Zoids themselves are great to look at and for mega-fans, there is a viewer where you can take a closer look at all of the detail that has been put into these 3D models. While these don’t do anything for me as a newcomer to Zoids, there’s certainly some fan service paid here.

Even for newcomers to the franchise, there’s plenty of arena brawling fun to be had in Zoids Wild: Blast Unleashed. It’s sorely missing online multiplayer and the story mode is of inconsistent quality but it’s never not exciting to smash giant robot apes rode by anime villains with a Mecha shaped like a Lion. Never.

Zoids Wild: Blast Unleashed launches exclusively on the Nintendo Switch on October 16th, 2020. The game was reviewed on a Switch Lite.