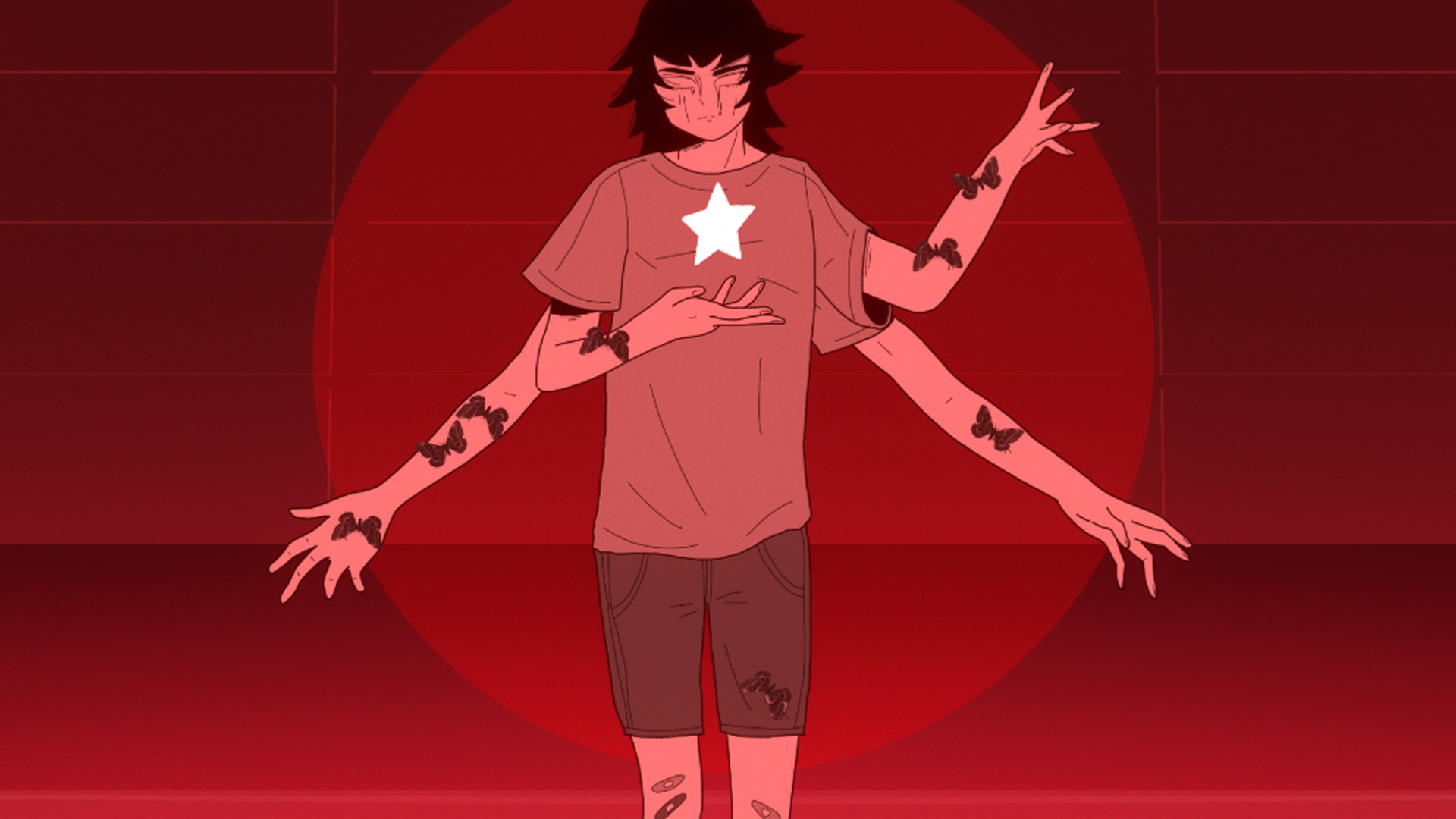 A visual novel that might be difficult for some people to experience, Milky Way Prince – The Vampire Star is entirely unique. The Finger Guns review:

When I finished Milky Way Prince: The Vampire Star for the first time, I sat in silence for half an hour contemplating what I’d just experienced while the main menu music played in the background. This is a game that demands reflection and thought from its player. It’s not a fun game or one for those faint of heart. In fact, I stop short of calling it a game at all. It feels deeper and more important than that. It depicts the impact of borderline personality disorder on those who struggle with it and those they love. There’s mention of self-harm and suicide. This is a mature, very personal and often uncomfortable journey that tells a story that has never been told in gaming before in a way that flies in the face of conventional game design in order to deliver its theme and message.

A first person visual novel, Milky Way Prince is a partly-autobiographical love story created almost entirely by one man – Lorenzo Redaelli. It tells the story of a relationship between the player character Nuki and “a shooting star” called Sune. Nuki enjoys looking at the stars and is immediately won over by the enigmatic Sune, describing the attraction as almost gravitational. When the pair first meet, Sune is crying. He warns Nuki that he’s dangerous to be around and that he hurts everyone. Undeterred, Nuki falls head over heels for Sune and the pair start a whirlwind romance and they settle into the orbit of one another. Or, at least that’s what Nuki believes. The reality is far more complex.

Sune AKA The Milky Way Prince is an unpredictable entity because he has borderline personality disorder. The narrative drops into their relationship at certain junctures throughout a year and each time, Sune is different. One moment he’s loving and the next he’s cold or hurtful, mere hours apart. Nuki struggles to keep up and understand what he is doing wrong or how to help this person he loves. No matter what he does, the response is not what he expects. The relationship is mentally abusive and troubling. The more Nuki loves, the more he seems to get hurt or confused. His shooting star burns him often and he can barely catch his breath between the euphoric highs and crushing lows. It’s a deeply unpleasant narrative to follow at times. For people who’ve experienced this in their own lives, the story will feel raw and all too familiar. I can say this from first-hand experience. The story to Milky Way Prince is one that’s validating to the pain suffered in these relationships, telling a very real and relatable story without the pantomime or pomp that you’d usually find in the visual novel genre.

I don’t want to spoil the finer points of the story because it’ll decrease their impact but I need to mention this; Despite the story being told via the perspective of Nuki, I found it incredibly refreshing to see Milky Way Prince go out of its way to portray Sune’s version of events too. It’d be easy to paint the person with BPD as the villain because of the dynamic the relationship takes and the very obvious hurt that’s inflicted by their words and actions. Milky Way Prince shows a learned and educated point of view by portraying Sune as someone who’s suffering too but as someone who can’t control their reactions. Using physiological terminology like “Idealisation”, “Devaluation”, “Love bombing” and more common traits for those with borderline personality disorder, it paints a character who’s not intrinsically evil but who’s actions and decisions can be abusive. It’s such an important element that this game gets right that so many other games that portray mental health get wrong.

The symbolism in Milky Way Prince: The Vampire Star is one important way the game delivers the narrative so tastefully. Nuki’s love for the lights in the nights sky translate in to many other elements of the game. Each chapter is named after a celestial body which represents the harmony in the relationship, for example. Astrological terminology worms its way into the way Nuki and Sune interact. At times it sounds like cute nicknames for one another but look deeper and these have more connotations.

It’s the writing and dialogue that really sells the plot in Milky Way Prince though. Presented entirely via text without vocals, it’s tightly written with very few wasted lines and dialogue that’s believable. The game often jumps from subtle lines of dialogue that’ll cut like a scalpel later to blunt statements which hammer those points home and it does so with confidence. Nuki’s internal monologue does a lot of the necessary exposition between these conversations. This is never truer than when Nuki and Sune become intimate. Each time they have sex with one another, the game presents 5 options for the player to explore, each based on a sense. Select any of the 5 symbols and Nuki describes what the sense is experiencing, often presented with nothing but a black screen and the description presented along the bottom of the screen. It’s very descriptive with lines like “it’s like licking and sucking a strawberry – a perfect heart shaped juicy fruit” or descriptions of the shampoo and cigarette smoke on Sune’s hair.

It’s during these sections that some of the most important decisions of Milky Way Prince get made. The game has a branching narrative with 3 endings to arrive at, dependent on how dominant or submissive you are and the dialogue options you choose. Sune will react in kind to those choices. There’s no big flashy indicator to tell you “you’re making plot altering choices now”, there’s no “true” path through this title and you shouldn’t come into this expecting a happy ending. You won’t find one.

Visually, Milky Way Prince: The Vampire Star has a really clean and interesting aesthetic. Combining 3D environments that have bold, crisp colours often contrasting those that they’re backed by, with 2D anime-like character art in the foreground makes for a really eye catching visage. The art style for the characters reminds me of the recent Devilman Crybaby. It’s a shame that these characters aren’t particularly animated and when they are, it’s very basic movement.

One of the reasons that Milky Way Prince: The Vampire Star stands out for me is the way that Lorenzo Redaelli uses filmic techniques rather than common games design conventions to relay a tone or feeling. Take the music for example. The vast majority of visual novels I’ve played over the past 5 years feel almost afraid of silence. They’ve always got music or background noise on every scene. While Milky Way Prince has its own fair share of scene setting music (most of which is really good), there are scenes that are entirely silent. As rote as this saying is, that silence can be deafening. The sound effects used have their own style too. To navigate the game, you must click on circles on the screen that indicates a point of interest. Each click triggers an off key piano key which really stands it out from the usually ear-pleasing clicks, plinks and plonks you usually find in these types of games. It’s when Milky Way Prince gets really experimental that it shines brightest – during one very quiet scene, the usually large and legible text becomes tiny and the sound of someone rubbing their fingers over a balloon begins to play on repeat. Apart from nails down a chalkboard, I can’t think of anything worse to break the quiet. While the text and dialogue in these scene makes for uncomfortable reading, the use of really frustrating sounds makes this whole segment almost distressing. These audio experiments aren’t perfect – one particular section goes on for so long that I had to put the game on mute because it became very irritating – but when they work, they’re suitably unnerving.

There’s one element of Milky Way Prince which I wish had been carried across from the usual visual novel genre and that’s an easily distinguishable difference between the internal and external voice. There are some scenes between Nuki and Sune that have both a conversation happening and internal deliberations. For the most part, these are easily set apart because of the use of italics but there are times when I asked myself “Did Nuki say this out loud or just in his head?”. It’s a small thing but in some scenes, I could have really gone for some speech marks around vocalised dialogue. It would have also been nice to be able to fast forward past dialogue you’ve already seen. A single run down a branch of the narrative take ~3 hours and you’ll need a full play through to see each ending.

Milky Way Prince: The Vampire Star tells an emotionally charged story in a poignant and empathic way. It approaches mental health and the way that borderline personality disorder effects lives in a unique way for gaming that shows experience with the subject matter and a willingness to share and teach. This isn’t a traditionally enjoyable game, in fact, it’s exactly the opposite and some people will find the subjects it covers to be distressing.

It’s a brave and creative debut title from Lorenzo Redaelli.

As an experience, Milky Way Prince is experimental, entirely unique and one that I’m glad exists. I imagine it’ll hang in the subconscious of most people who give it the time of day, but the subject matter will be too much for some to bear.

Beacon Pines Review (Switch) – At A Loss For Words

September 21, 2022
We use cookies on our website to give you the most relevant experience by remembering your preferences and repeat visits. By clicking “Accept”, you consent to the use of ALL the cookies.
Cookie settingsACCEPT
Manage consent