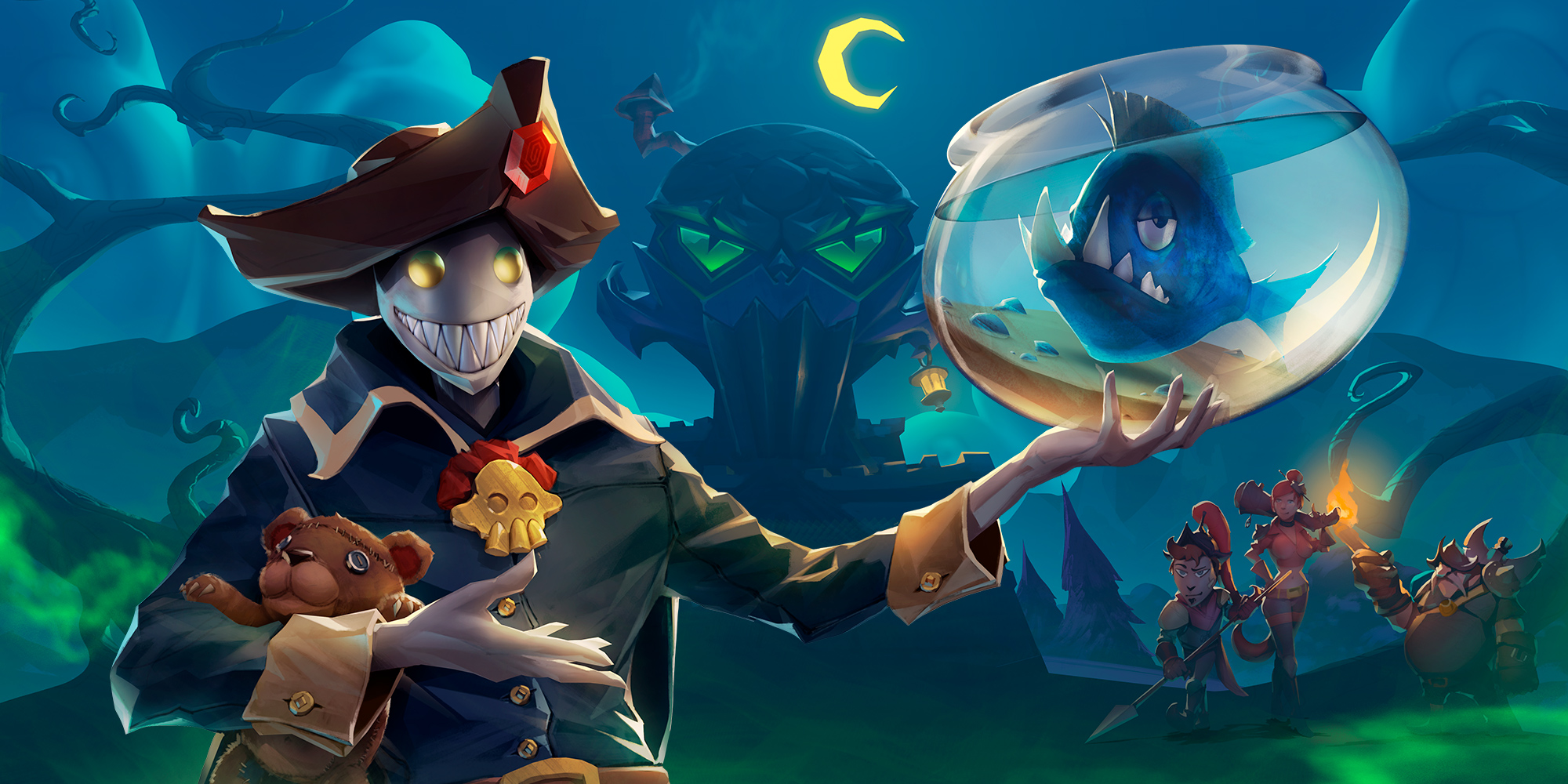 A point and click with a strong sense of humour and fun puzzles, Darkestville Castle is a good time. The Finger Guns Review;

There’s very few point-and-click adventures that have ever grabbed my interest. One that comes to mind if I’m pushed to think about it is a 1996 PC game called Titanic: Adventure out of Time which I played to death in my youth, for some reason. It was terrible but I found myself deeply immersed in its stories, something that can’t be said for the rest of the genre since. Now, I’m not going into Darkestville Castle with the want to compare it to such esteemed megahits like Titanic: Adventure out of Time, but as the trailer got my quietly curious, I adorned my adventure hat once again in the hope it would pull me back into the genre, if only for a few hours.https://www.youtube.com/embed/dE0VtYow7Cs?feature=oembed

The initial pull for me towards Darkestville Castle was the sense of humour, something that I fear is lacking in a majority of video game narratives in the modern era. From the outset, I was chuckling away at myself. The above trailer raised enough of a smile and I was happy that all of the best jokes weren’t already spoiled for me in the marketing material.

You play as Cid, a demon who has taken up residence in Darkestville after crash landing there when he was a baby and proceeded to raise all kinds of heck for no real reason other than it’s rather fun to do so. The opening of the game tells some hilarious tales of creating mutant chickens and making food go rather bad just to get his kicks. Cid wears his mischievous grin at all times and is clearly having a ball annoying the townsfolk but having just enough restraint to not cause any major damage to the residents of Darkestville. He’s certainly a nuisance, but he’s not gonna kill you. Maybe. We’ve all got that one friend, right?

Despite the rest of the town rather shrugging their shoulders at Cid’s antics, one particular resident is all but done with his tomfoolery. A certain Mr. Dan Teapot wants Cid gone and attempts to trap him in the castle where Cid resides, thinking up dastardly schemes and pretty much chills with his pet fish Domingo (who’s a very good boy) and stacks of unread books. So for the 148th time, Teapot wants Cid gone for good. Now of course, Cid is one step ahead and before Dan can say ‘har har I win!’, Cid unleashes the trap door and Teapot has once again been bested, but not before Cid discovers his pet fish has been taken by some evil goons. Cid and Teapot suddenly have a common enemy, and it’s up to Cid to rid Darkestville of this new threat and return relative peace to the town.

Darkestwille Castle kicks into gear once Cid has a higher purpose and whilst that’s not a particularly original platform for the game to jump off – very little of Darkestville hasn’t been lifted from similar titles in the genre -, the anti-hero adventure is always a treat to go on, almost as if Loki was given the keys to Monkey island. Cid will visit a variety of locales on his journey to saving Darkestville, including secret hideouts, a graveyard, pubs and more, all beautifully hand-drawn and bursting with colour, looking particularly gorgeous on the Switch screen, which is where I played the entirety of the game. The blueness of Cid’s castle is electric, with the sun drenched beaches standing out as a particular highlight. There’s character and life in almost every level, with its secrets only a click away but enjoyable to discover because you want to see more of the games art design. You’re a tad spoiled by the talents of the developers’ artists throughout the playthrough.

There’s never an awful lot going in these still scenes, which wouldn’t be any kind of issue if it didn’t stretch to the characters you meet along the way and Cid himself. The animations on the characters are particularly stiff, and whilst they’re drawn with a whimsical eye, I would have welcome a little bit of extra life in the mischief loving demon who only really portrays his evil-doings visually by his aforementioned grin taking up a good 50% of his face.

In true point-and-click style then, you’re going to be clicking around the screen like your life depended on it looking for the clue to the puzzles Cid has to work out before moving on. There’s plenty to uncover in each level, and you’ll be combining items to break or fix or open things a million times over till it physically hurts you to press the Joy-Cons, in the Switch versions, case, at least. You can explore as much as you like once you’ve bested Teapot and escaped your castle and the difficulty slides up with it. There’s never really much of a direction, it’s all very traditional to what you would have come to expect from the likes of games Darkestville Castle wants to stand up against. Particular sections like learning how to cheat at a game of dice was a particular highlight, and when Cid wants to play the prankster it certainly doesn’t disappoint.

It’s all point-and-click-by-numbers, though. You’ll have three options presented to you when interacting with an item, namely grabbing the item, inspecting it or talking. I found myself playing my own meta game throughout, seeing how many items I could get Cid to say out loud ‘I can’t talk to that’ when choosing the talk item for a draw, a door or a drinks bottle. It made me laugh anyway, and such was the fun of listening to Cid’s dialogue I was hoping there would be hidden nuggets by selecting every option for every item. Sadly, it wasn’t to be, though he has some great stories inside the castle which are well worth listening to.

Cid is a great protagonist, too. Consistently fun to pal up with on this journey of redemption, and is full of cracking lines which made me chuckle out loud on several occasions. The performances are all top notch across the board, but damn never every interaction is stolen by Cid’s terrific writing and sparkling wit. He’s fully aware he’s one step ahead of everyone around him and ensures everyone knows it. I won’t give it away here but the highlight was certainly his back and forth with the Mayor of Darkestville. Look out for it, it’s wonderful.

The representation of female characters is a tad grating, sadly. There are very few and those that are included a particularly cliche in design and disappointing, to say the least. Foxy the Demon Hunter is smart and capable, but looks like she wouldn’t be out of place in a fantasy video game from the early 2000’s that just got itself a Dead or Alive Beach Volleyball-esque spin-off. She just looks too ‘male fantasy’ to be taken seriously as a fully fleshed out character, which is even more depressing considering Darkestville is full of demons and other strange creatures. Seems like a missed opportunity to really create a kick-ass female character that didn’t look like she just fell off the drawing board for a Senran Kagura game.

She’s also a fox. Did I not mention that? Yeah, she’s a fox. Because of course she is.

So there’s plenty to like about Darkestville Castle, and if you’re looking for a solid point-and-click fix you could do a whole lot worse, there’s just not much here in terms of gameplay innovation you probably haven’t seen elsewhere before. Thankfully the games dialogue, performances and presentation ensure that it’s certainly worth a hearty look, just don’t expect anything too challenging or surprising.

It’s no Titanic: Adventure out of Time, that’s for damn sure.

Darkestville Castle feels at home on the Switch, and with a strong narrative and clever puzzles cements itself as a decent point-and-click adventure, despite some niggles.

Darkestville Castle is out now on Steam, mobile, Nintendo Switch (reviewed), PS4 and Xbox One.