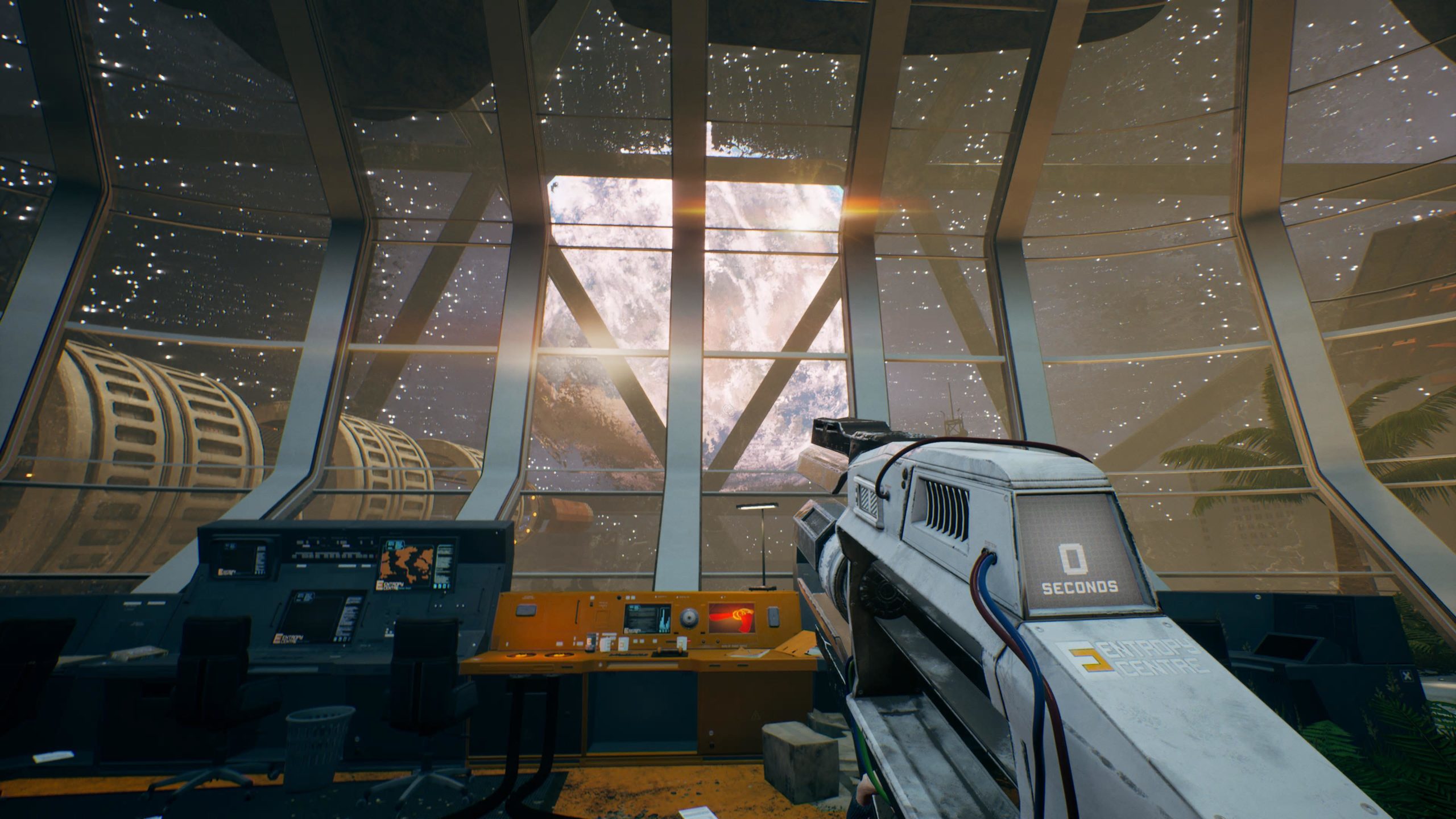 Save the world by solving puzzles backwards in the highly anticipated The Entropy Centre. The Finger Guns review:

Video games are, by their nature, entertainment. From Sonic to Saturnalia, we delve into this industry purely for the escapism, the enjoyment and the wonder of coming across works of creative art that leave us fulfilled. The Entropy Centre had some high expectations on my end, and it’s all their fault. Every trailer I’d seen of the game had me enormously hyped and I immediately wanted to make sure I had my name down for review.

After playing the demo several times earlier this year, I was super excited to see what more this game could show me that would justify me screaming from the rooftops how brilliantly inventive it is.

The Entropy Centre is pure popcorn entertainment that will tax your brain with an enormous grin on your face. And it takes some wonderment to combine the two.

I’ve never been all that great at puzzle games but The Entropy Centre kinda gets me. It’s not necessarily about the difficulty of the puzzle but the tidal wave of endorphins that rush through you when you figure it out. It carries you through the rest of the game as you hit puzzle after puzzle that will no doubt frustrate and annoy you, but the answer is always staring you in the face. And as the game progresses, more and more mechanics are brought into the fold, the genius on display to get these damn things complete is hugely satisfying as the player.

You begin to think you’ve seen it all and then another puzzle will arrive that ups the ante once again. The feeling of working out every puzzle one by one never gets old and you’ve got all the time in the world to figure them out.

What makes The Entropy Centre’s puzzles so interesting though is you have to work them out before you actually attempt them. Working backwards with your Entropy Device which features a talking AI named Astra (by far the games MVP – ‘all I can see is chin…so much chin’) who helps through understanding why you’ve woken up alone on an enormous space station having to work out puzzles to save the earth from a ‘cataclysmic event’. Said event takes place early on in the game, so it’s up to you to build up enough Entropy rewind energy to rewind the planet and save everyone.

To do this you need to make your way through a series of puzzling rooms, each more dastardly than the last. Your aforementioned Entropy Device has the power to rewind objects from their original placement. A good example of this is where you need to place a cube on a raising platform to reach a button at the top it needs to rest on. To do this you need to head to the other side of the room, pick up the cube with your Entropy Device, place it on the platform (but not before placing it on a button elsewhere to shut down an electrical grid the cubes can’t get through), and then rewinding the movement of the box so it hits both buttons before the platform raises, and you can pick it up again to place it on another button on a new level to open the door to escape.

It sounds complex and it certainly is in certain moments, but it’s strange how, well, straightforward backwards thinking becomes. You can take your time and look around the room and think ‘well the cube needs to be up there, so I’ll have to place it here, and then here, and then over here to open the door’ and your brain begins to piece it all together and suddenly you’re whizzing around with extra mechanics such as jump boxes and springboards to get around knowing you’ve just figured this all out in one way but for it to work you’re going to have to remember the order backwards. It’s brilliantly designed and like I said above, the reward is feeling like you’re a goddamn genius for working this all out.

Other puzzles will require freezing your cube in time and space for a few seconds. For example, a certain puzzle will task you with placing a cube on a button on the far side of the wall at the end of a moving segment which can only be manoeuvred by you standing on another button on the other side of the room. So you’ll place your cube on the platform and take it all the way to the end but now the platform is in the way of the cube hitting the button, so you’ll need to jump off the platform moving button but at the same time ensuring the cube stays exactly where it is. The Entropy Device can freeze the cube in place while the platform moves back to its original position, allowing you to drop the cube onto the button and opening the door to the next puzzle.

That feeling of success and fulfilment feeds directly back into the narrative. This abandoned, desolate, cold space station your character Aria finds herself the sole survivor(?) of an event that evidently went horribly, horribly wrong. The companies idea of building up Entropy through putting humans through mentally and physically enduring puzzles seems to have not worked as well as they had hoped (collectibles around the station you can find on the still working PC’s in offices tell a story of people who signed up for this idea only to want to leave as soon as they possibly can speaks volumes of how mismanaged this plan was).

Still, you have Astra on hand to keep your spirits up and spill out all the exposition you need. She’s also unaware of where the rest of the crew and staff have gone, but is more than happy to give you some encouragement and cheer you on as you go about your puzzles and working out just what the hell happened to everyone else.

Astra will keep you sane throughout and make you laugh as you stress yourself out trying to work out puzzles further on in the game. A segment where you’re freefalling in an elevator with Astra made me howl out loud, and now I kinda want one in real life.

Thinking in reverse is exactly how you’ll get through The Entropy Centre. There’s no real easy way or cheesing puzzles to power through, you’ve got to find that one way of doing it in order to progress. I thought I could cheese it, and well, I was soon put in my place by the game itself. By the time water and air mechanics are involved you begin to wonder if you’ve taken too much on. By the time the credits rolled (at the time of writing, literally about twenty-five minutes ago), you’ll feel like you could step into The Entropy Centre and save the world with one hand tied behind your back. The feeling of accomplishment is going to stay with me for a while, even if I know there will likely be hundreds of thousands of people who will tear through this game quicker than I did, I’ll know I beat it without looking up a guide or watching YouTube videos. I couldn’t. The damn game hadn’t been released yet.

And there’s that inescapable joy that comes with discovering a video game you knew nothing about and it suddenly becoming one of your most beloved games of the year. The Entropy Centre was exactly what I wanted it to be when I saw it for the first time all those months ago. It’s hugely rewarding, challenging, creative, inventive, jaw-droppingly gorgeous (particularly on PC, though I played on PS5 for review) and in some moments, hilarious and heart-warming. It’s an absolute masterclass in how to balance genuine frustration and fear and having your back the entire way through. The game doesn’t show you what to do, but Astra being there somehow feels like you couldn’t have done it without her support all the way through. Having a companion in the lonely, cold corridors of The Entropy Centre is something you’ll come to be hugely appreciative of.

Yes, on the surface it owes a whole lot to the likes of Portal, Control, even indie titles such as The Spectrum Retreat and Superliminal seem to have influenced The Entropy Centre. There’s no getting away from Portal references though and it’ll be what’s on your mind throughout. It doesn’t matter, this is an entirely different beast once you start getting deep into the puzzles, and the narrative is dare I say, a more immersive and satisfying ride to take?

I hope dropping this game in November won’t tarnish its success. I really hope people take a chance on what I consider without question of my games of the year. The Entropy Centre (did I mention this entire game was developed by one guy in Brighton?) is an absolute sensation.

The Entropy Centre is a masterclass in intuitive, creative and exciting game design. From the first puzzle to the last you’ll be staggered by the imagination on display, and as you rebuild the world around you you’ll have a few chuckles along the way, too. A truly excellent first-person puzzler that deserves to be played by absolutely everyone.

The Entropy Centre is out now on PC via Steam, PS5 (reviewed), PS4, Xbox One and Xbox Series S|X