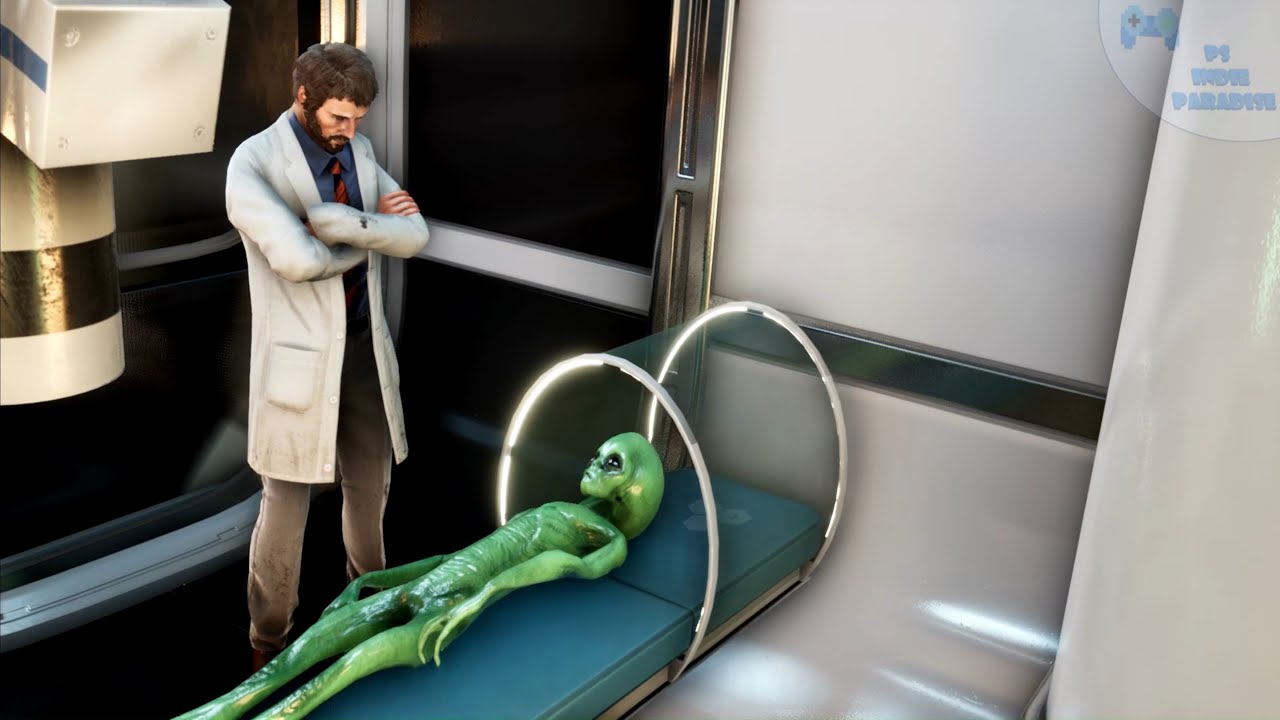 Over the 11+ years that I’ve been critiquing games, I’ve always made a concerted effort to finish the games I write a review for. Sure, that’s not always possible for a variety of reasons but I’ve always taken pride in the effort I put into exploring as much as possible of a game before committing my opinion to the record. I won’t be doing that for Alpha Invasion. I tap out. I give up. I’m waving the white flag. This first person stealth game has pushed me past my last thread of patience and understanding. Over the 5 hours I’ve spent with this game, I’ve encountered more bugs, crashes, design flaws and downright irritations that I don’t want to spend another second with it. I’ve only reached chapter 3 and I never want to see beyond that.

It’s a real shame because on paper, Alpha Invasion has a very intriguing concept. You play as an alien who’s UFO was shot down by a fighter jet. You awake in the bowels of a government facility surrounded by scientists and soldiers. At the first chance you get, you try to make your escape while retrieving alien artefacts. You’re unarmed and vulnerable but you have 1 trick up your sleeve; You can body snatch. Walk around as your little green self and the human occupants of the base will shoot on sight. So instead you can sneak up behind a human who’s unaware of your presence and you can take over their form and wear them like a human suit. This forms the loop to everything I’ve experienced in Alpha Invasion – In order to progress through each chapter, you need to find the right human guise to get through locked doors or guarded areas.

It’s the implementation of this mechanic that leaves a lot to be desired in Alpha Invasion. The game is a punishing hands off experience – the only guidance is issued during loading screens – but it’s almost entirely unnecessary because there’s no depth or complexity to the stealth. There’s no indicator of whether you’ve been spotted, where you’ll be spotted or if someone can hear you. Instead, it’s a matter of trial and error, but more of that latter. That’s because there’s no consistency in the stealth mechanics or AI. The very same scientist will totally ignore your presence or raise the alarm despite taking the exact same path past them on 2 separate attempts. Once you’ve disguised yourself in a human host, there’s also a “fear meter”. This meter fills and empties as you do things – run and it goes up, walk and it slowly decreases. Walk close to a guard and it’ll spike, stand alone and it’ll empty. If the gauge fills, you’re alien is ejected from the human body and you’ll lose any benefit it grants i.e. you’ll get turned into swish cheese as soon as someone see’s you. Again, there’s very little consistency here. The AI seems to be more concerned with you, increasing your “fear”, if you walk normally down a corridor like a human would than if you were to hug the opposite wall and look away from them.

Understanding these mechanics is made all the more difficult by the myriad bugs, glitches and issues Alpha Invasion has. When attempting to body snatch a victim, I’ve clipped through the floor and ended up glued in position half way through the floor more times than I can count, forcing a restart. When using a computer, the cursor completely disappears which meant that there was no way to exit the screen view or even bring up the pause menu in order to respawn at the last checkpoint. I’ve got trapped on scenery objects when simply walking past them. When I was seen outside of a human disguise a few times, the guards have completely glitched out and have all crowded around me like a massive group hug instead of firing off their weaponry which was frankly hilarious. The pathing on some NPC’s seems totally broken and you see them walking face first into walls. Between chapters, you seem to abandon your host and start each one as a bare naked alien again. These are just a few of the long list of technical issues Alpha Invasion has.

And while the technical problems are plentiful within Alpha Invasion, it’s the game’s design that really drag it down. There’s a distinct lack of game design theory or knowledge demonstrated in anything I’ve played. NPC positioning, level design, what few puzzles I’ve come across that can barely be described as such – it all feels slapdash and haphazard rather than with an attempt to create an inviting or fun experience for the player.

Everything in this game is frustrating rather than tense or enjoyable, which I think were the intentions of the developers. This game instead feels like a cobbling together of pre-made assets (which, admittedly, are quite pretty on first inspection but get repeated far too often) into a loose structure with little testing for user experience.

In some instances, you can see how thrown together this game is. When you collect any of the alien artefacts hidden around the game, you’re transported to your home planet to explore and reveal more of the story. At first glance, this area looks impressive but the more you look, the more issues you see. Buildings that aren’t connected to the floor. Ladders that end feet above the ground. A structure that totally disappears if you approach it from a particular direction. It’s like these assets were simply plonked on a map with little regard for their placement. Much of what I’ve played of Alpha Invasion looks and feels that way.

The last nail in the coffin for my play time with Alpha Invasion was a tonally jarring conversation with an NPC Scientist who exclaimed “WTF are you talking about? Guards!” when I didn’t answer a question in the right manner. Not “What the F**K”. “WTF”. I had to laugh because if I didn’t, my face would likely have cringed enough to implode in on itself.

An interesting concept, potentially exciting systems and some appealing visuals are utterly squandered in Alpha Invasion. With a profound number of technical issues, mechanical inconsistencies and level design that portray a slapdash feeling, you’ll need an immense amount of patience to overcome this games annoyances. After having to quit out of the game 6 times on the same chapter because of 6 different glitches, I think this is one E.T. that should have simply stayed home.

Alpha Invasion is available now on PS4 (reviewed on a base PS4).