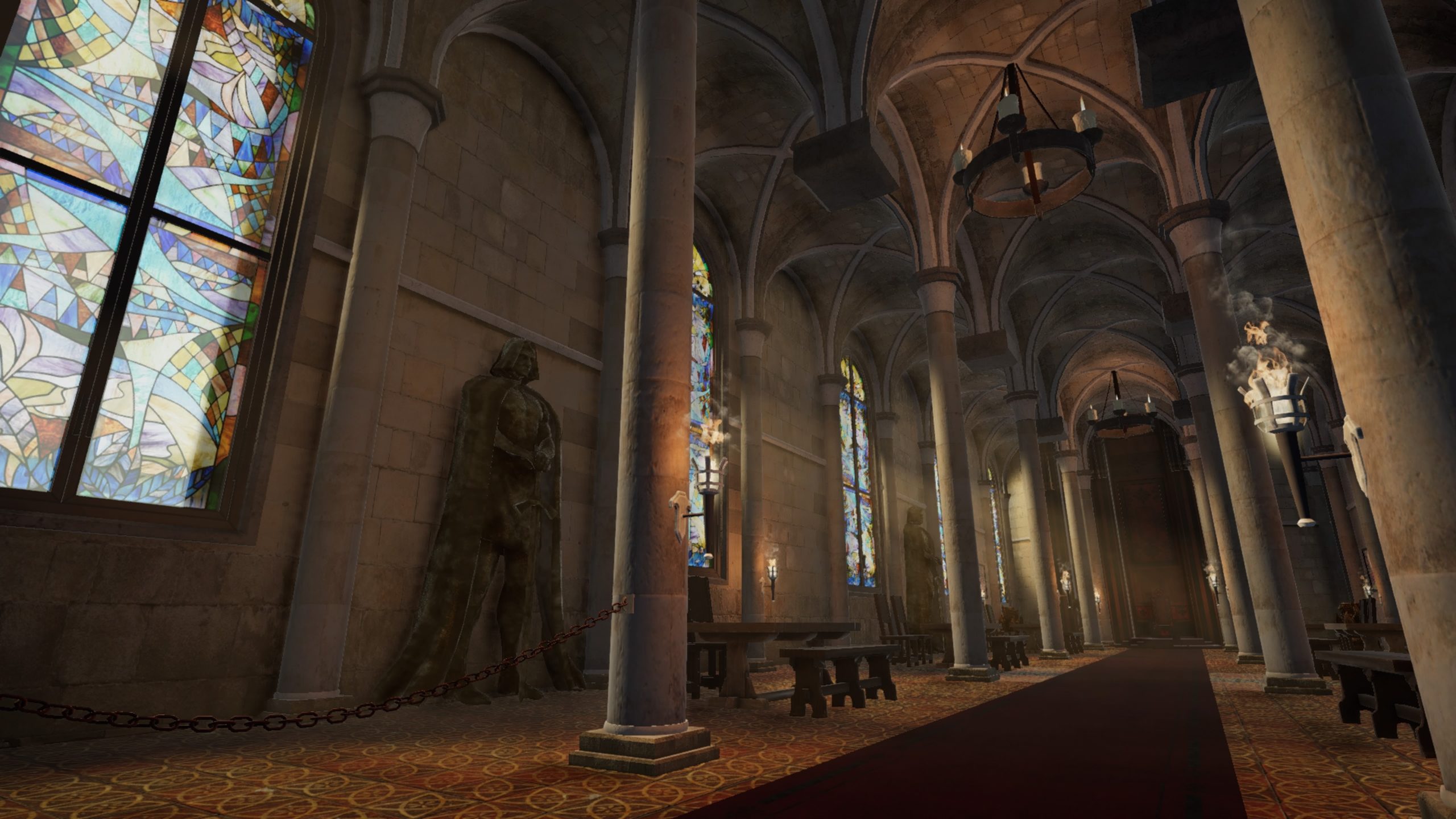 M'lord, homes need a cleanin', better get your R2 button to it. The Finger Guns review of Castle Renovator.

Having somehow managed to never really play any of the hugely popular simulator type games out there in the wild, it was only natural that the prospect of maintaining and building my own castle would rope me in. Castle Renovator was to be my first foray into the genre – what could go wrong?

Everything, it would seem.

Castle Renovator bafflingly manages to make a 9-5 day job more appealing than playing a video game, would you believe. It’s a mix of poorly implemented building mechanics which have little substantive pay-off, a hideously boring and uninteresting approach to “renovation” and a performance level that harkens back to playing Bubsy 3D on the PS1. If you ever suffered Bubsy, I’m sorry for the flashbacks.

It’s not all completely terrible and if you, in your own unique way, enjoy the mundanity of a game that you can play on automatic, perhaps this’ll be a keep(er) for you.

In A Manor of Simulating

Castle Renovator has you start off quick. Dropped into your own budding metropolis of “My Kingdomz” (I had to change the name for a trophy, hence the “z”), you’re given a patch of land upon which to build your bustling town.

The core of the game is completing quests you acquire from the noticeboard. There’s some exposition given as to why you’re doing these random tasks, but I stopped reading them immediately as they’re very dry. Accepting a quest whisks you away to the corresponding level.

Each quest has a checklist of things you need to do to successfully… um, “renovate”… the location. This boils down to picking up trash, cleaning stains, lighting torches or repairing furniture or the architecture itself. There’s additionally some notes and chests scattered about each one which contribute to completion and extra rewards.

My first issue with Castle Renovator is that half of the missions don’t involve a castle. You’re sorting out a regular old hut, dungeon or boat. Riveting. The second is that once you’ve finished the first quest, you’ve seen 90% of what all the quests have to offer. You’ll be bored long before the final mission simply due to the endless repetition of the limited number of tasks you’ll be continually doing.

While finishing quests is essential to earn materials and money to build your own patch of lordship, the actual act of playing them is as mindless as a brawling peasant.

Gameplay boils down to pressing R2 to pick up basically everything on the floor. Patches of cloth, cobwebs, planks of wood, entire barrels, everything. Where does it all go? No idea, but it’s been “cleaned” now. It’s a kleptomaniac’s wet dream, only without the satisfying conclusion.

Certain objectives will have you using a radial menu to bring out a broom or hammer to clean, repair or destroy objects, but it again just boils down to hammering R2 until everything is gone. Sweeping weirdly requires moving your analogue stick to make it go faster while repairing anything is a chore thanks to the input delay with the radial menu and the laboured animations taking the entire battle of Hastings to finish.

It’s tedious busy work in its most distilled form. That’s not even mentioning if you missed a rogue piece of garbage you’ll now need to scour across the level to find. Castle Renovator is a game you need less brain cells to play than it takes to make a sandwich.

Now, sometimes we all want a game like that to perch out on the couch with, no thought required. Great, if you’re looking for about 4 hours of that, Castle Renovator has your Saturday afternoon sorted. For me, it just felt too menial to really get on board with.

Lord Over Your… Non-existent Subjects?

As you progress through the small handful of quests, you’ll be returned to your own landscape to build up your very own idylic castle.

To this end, Castle Renovator has a moderate set of building mechanics. You’ll be using R1 to access the inventory to lay down all manner of foundations, walls, roofs, windows, doors and indoor accessories for your budding townspeople… if there were any.

The idea is you build various structures and homes (again, not castles) to rent out to people for Flippers and resources. Each potential renter may have certain requirements or expectations of how much the home costs, how big it is and what items they expect to be lavished with.

Which would be a cool system – if these NPCs actually existed in your realm. But they don’t. You can shove a bed, wardrobe and a tiger together in a 2×2 box and call it a day. Who needs a washtub or latrine eh? There’s no real satisfaction to building any of these structures, so why would I put effort into making detailed or logical homes?

The act of actually constructing these buildings is also frustrating. The quick-access menu is cumbersome, the menus have input lag and constantly move what object you’ve selected, the auto-snapping of structural components goes wonky constantly. Considering the ideal of this game is to build the castle of your dreams, it’s certainly doing it’s best to make me yearn for it turn into King’s Landing by the end of Game of Thrones.

Lastly, you can house certain NPCs who do actually appear in your town and will “perform jobs” for you, like cleaning houses or collecting taxes, but this basically means they stand at a place, you walk over and press R2, it instantly completes their task and that’s that. The NPCs are about as useful as a swordsman facing down cavalry in the mud.

Simulator games have their appeal, but I’m certain they can be done far better than this. Part of my disgruntlement with Castle Renovator is that it’s just so broken performance wise. The actual act of building castles and clearing quests could be a kind of cathartic satisfaction for people, if it didn’t make you almost throw up just from the act of playing it.

I say this, because the level of screen-tearing, texture pop-in and input delay on camera movements are so horrendous it’ll genuinely have you queasy. I don’t think I’ve ever been as gob-smacked by a game’s awful technical performance as I was with Castle Renovator. Graphically it’s pretty ugly, with missing textures, terrible lighting effects (you basically can’t play it when it gets to nighttime) and animations more wooden than that oak tree in your garden.

I wasn’t expecting massive production values, I really wasn’t. But Castle Renovator barely scrapes into the minimum level a game should be functioning at before it’s considered broken. Kat watched about 30 seconds of me playing this and found it made her feel sick, such is the impressive level of awful performance this reaches.

Like I said though, this kind of game is for a particular niche of people. People who will probably glean more from its flawed mechanics than me. On a technical level, Castle Renovator is a bit of a mess, which is ironic given its premise. I’d recommend just playing one of the better ones to get your kicks instead, maybe Power Wash simulator or House Flipper?

Castle Renovator is a game plagued with nauseating technical problems, tedious gameplay design and frustrating building mechanics. There’s no salvaging this mess of a castle, perhaps except in the eyes of those already too deep into the medieval mire.

Castle Renovator is out now on PS4/PS5 (review platform).