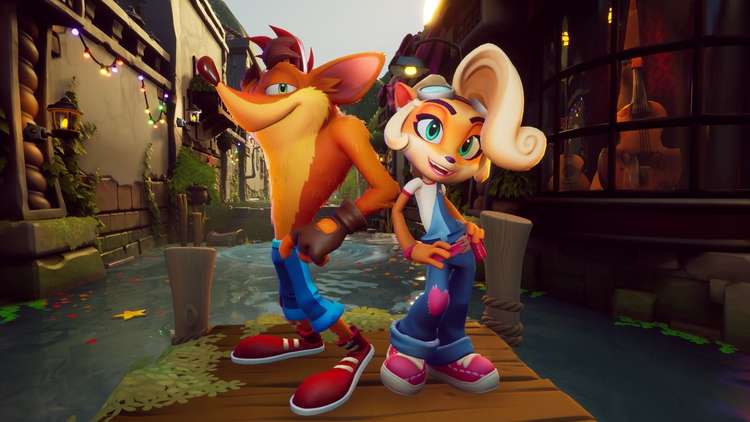 Four months on, Crash Bandicoot 4 is getting its PS5 upgrade. We take a look at the new additions - is it worth a first plunge, free upgrade, or best left alone? The Finger Guns Review.

Let’s get one thing straight before we start off – Crash Bandicoot 4: It’s About Time was a fantastic game on PS4 when it released last year. It brought the distinct Crash humour, the demanding platforming, the danceable music, and the whole gang back for a dramatic adventure with loads of content. We loved it, and gave the game a heady 9/10.

From our PS4 review: Crash Bandicoot 4: It’s About Time is the perfect distillation of classic gameplay, and modern gaming demands. It is full to bursting with content, things to earn and masses of replayability. Though its difficulty may be too high for some, it’s definitely the best Crash Bandicoot has ever been and deserves its place alongside the original trilogy. A classic modernised and a modern classic.

So, now we’re a few months on, Crash 4 has hit the PS5. Is it a harder, better, stronger marsupial than it was on last-gen? Does the upgrade feel tangible enough to warrant the expense? Does it make use of the PS5’s hardware? Well, I’m guessing that’s what you’re here to find out.

If you want our full review of Crash Bandicoot 4: It’s About Time on PS4 talking about everything from graphics to the series’ legacy, controls to story to difficulty, check it out here. For the PS5 review, I’m going to be sticking to the new stuff, although at the end we’ll rate the game on the whole package.

On PS4, Crash Bandicoot 4 was already pretty jaw-droppingly beautiful. And I can’t say that’s really changed here. The actual levels, skins and models don’t really look different – but they already looked like the best this style could get. So maybe it’s not a double jump in tangible polygons, but what it is, is a smoother, more vibrant and higher fidelity experience on PS5. Crash’s movements and animations are sleek, slicker than a greased bandicoot even, and the new version maintains 60FPS throughout, and even 4K if you’ve got a nice 4K TV.

Load times are impressive. Barely any level took more than ten seconds to load from the dimensional map, and most took only seven seconds. Cutscenes were almost instant, and getting back to the map was also just a few seconds. Overall the SSD is working its magic, and a game that had some chunky load times is reduced to smooth and seamless platforming. This is even more apparent in the later game, in the sections that demand a couple of attempts (sorry 30+ attempts) to complete, the almost instant load times make a hard task a lot more bearable. Before you needed the patience of a crocodile, whereas now you need barely the attention span of a Tasmanian devil to see you to the next level.

Another addition that feels great is the adaptive triggers on the Dualsense controller. Whether it’s Crash’s jetboard engine, Cortex’s ray gun, or Dingodile’s vacuum, a sense of resistance has been given to the use of these gadgets. You can pump it like an accelerator and feel the give through the controller, and though its only a small addition, it feels right and works well. There aren’t that many other places in a platformer of this type to include the triggers and make sense, so maybe less is more? Also the title of this review is a nod to the highly meme-able PR for the Crash 4 PS5 release where the announcer says you can really feel the suck of Dingodile’s vacuum. The game’s great, the vacuum sucks.

Upon upgrading you get access to a new skin or two, the Totally Tubular 80s ones unless you’d already earned them on PS4, or the Boneless skins, which are kinda cool see-through skeletons for Crash and Coco, where they still crucially wear their underwear. Can’t have no naked bandicoots in a kid’s game, even if all you’d see is a pelvis bone.

However these two skins only served to highlight how little else there was in the new release in terms of cosmetics or DLC. Many other PS5 upgrade releases over this past few months have included whole new levels, expansions, or chapters to sweeten that PS5 upgrade jump. Of course, if you already own the game the upgrade is free, but for those who are new, the lack of much else to convince them to make the purchase is a shame. I would have loved me some more levels.

It’s not 100% perfect in the Wumpa Islands. One of the new features common in a lot of PS5 upgrades is the ability to import your PS4 saves to the new PS5 version and carry on where you left off last year. Crash Bandicoot 4 has this feature, and I was ready to use it – I’ve still got gems to find and time trials to do, even if I did get a nice high percentage on PS4. However, the process is not without its issues.

Start the game up and it’ll ask you if you want to download your PS4 save from the cloud. Fine, I thought, my save is on the cloud storage system. I clicked and I was told repeatedly that I had no cloud save data. I checked, it was definitely there – I even downloaded it onto the system storage. No dice. However it also says ‘You must first upload from the Save Slot screen in the PS4 game’. Fine, I get it, they don’t want you to use this feature without actually having a copy of the PS4 game. You can’t just use your PS4 save on its own having sold the game for example.

It’s solved by downloading the PS4 version as well (which comes with the PS5 version) or you know, re-downloading the PS4 version you already had, then downloading the 1.05 update, and then going through a process of uploading a special save slot to the cloud, only to then open your PS5 version and download it back down again. Even with good fibre optic, that’s having to wait for not one but two versions of the same game, plus updates, to download before you can carry on playing, which for me, was most of an evening gone.

So is Crash Bandicoot 4 It’s About Time worth the dive on PS5? Absolutely. This is still the stellar action platformer it was at the end of last year, and nothing has changed in that regard. If you were on the fence before, and have a nice new PS5 now, then it’s got all the mod-cons that you could want – 4K, 60FPS smoothness, adaptive trigger fun, and a few new skins. Take the plunge on a fantastic game, and if you need any more convincing read our review from last year.

If you have Crash on PS4 already, then the free upgrade is probably a no-brainer, I mean why not? But it is also a little on the skinny side in terms of additions with no DLC, and you may find transferring your save file more hard work than I think was necessary.

Crash Bandicoot 4 It’s About Time is still the best Crash Bandicoot has ever been, and deserves to be played if you have any interest in platformers or loved the originals way back when. The PS5 upgrade gives it a thin but noticeable lick of paint to stand alongside the next-generation, and a reason to dive back in.

Crash Bandicoot 4: It’s About Time is available now on PS4 and PS5 (review platform), Xbox One and Xbox Series X/S and Nintendo Switch.