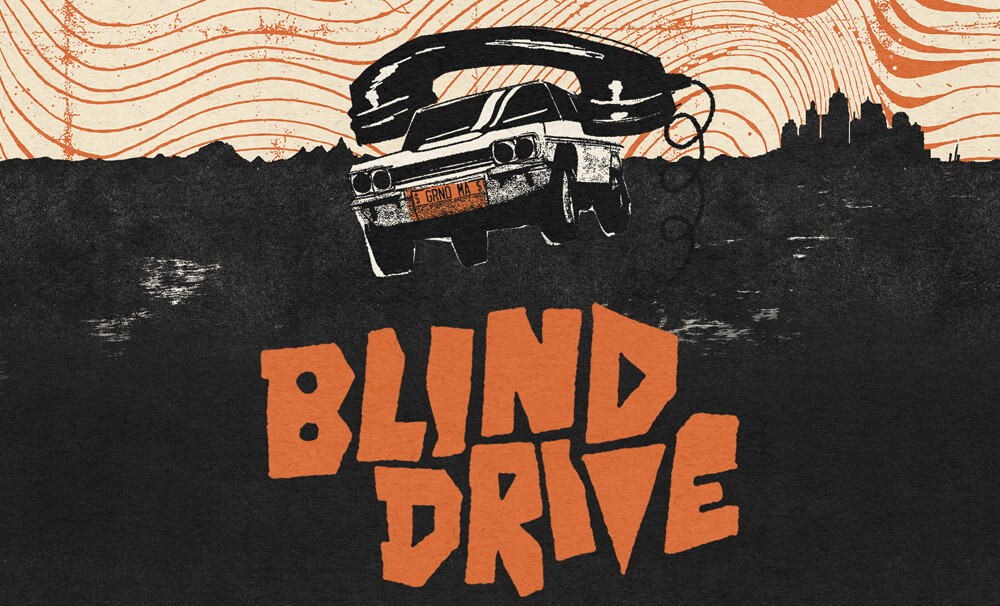 I know it’s only March but I’m calling it now – Blind Drive is going to be one of the most unique and innovative games to release in 2021.

More often than not, the audio of a game is complementary to its visuals. The music assists in setting a scene. The audio helps build a world. It’s rare – other than in music/rhythm titles and some horror games – that the audio is the very core to the games experience. Blind Drive flips that around entirely. The visuals don’t matter in this game at all. It’s a game built entirely around a rich soundscape.

In Blind Drive you play as a character called Donnie. Looking for an easy payday, he has signed up to be a guinea pig for a scientific experiment. It doesn’t take long to figure out that this is not going according to plan. Blindfolded and handcuffed to a car which is under the control of a crazed mobster, Donnie is in deep trouble. What unfolds over the 3-5 hour, 27 chapter long Blind Drive is nothing short of bonkers. Crashing into ice cream vans, avoiding hillbilly gun gunfire and running over manic pedestrians are just some of the madcap, smile inducing events that Donnie will have to navigate without crashing.

See No Evil, Speak No Evil…

His (and thus the player’s) only hope is to use his sense of hearing to avoid oncoming traffic, smash cop cars and avoid missile toating dolphins. The premise for Blind Drive is simple. There’s no visuals to speak of. On the screen there’s an outline that looks like a blindfold. On the inside of this shape is the current score, distance travelled and the number of lives left. At the centre of this shape is a set of lines, like an old school radio tuner – more on this in a second. While this screen changes very mildly during some of the chapters in this game, this is a game which you can play with your eyes closed.

All of the action of Blind Drive is communicated to the player via the audio. Slip on headphones and you’re surrounded by an immersive audio environment that’s convincingly realistic. You can hear the rev of the car. You can hear the flow of the air through the open windows. Most importantly, you can hear the oncoming traffic/dangers and you can feel which direction it’s coming from. This is where that aforementioned radio tuner line comes in. This line represents the turn of the car. As default, it’ll sit in the centre of the screen. Using a controller or the keyboard directional keys, you can move it left and right, thus steering the car in that direction. By listening to the world go by and honing in on the dangers, spotting their location in the sounds around you, the core loop of Blind Drive is to use that information to move the car out of danger or into targets. Fail 3 times and you’ll have to head back to the start of the chapter.

None of this would work if the audio was anything but exceptional but Blind Drive is a masterclass in audio design. Everything you can hear has a pitch, a proximity and a direction that relays its position and speed in the world. Cars get louder and higher pitched as they approach. Police sirens move behind then up alongside you as they try to spin you out. I won’t spoil the last few chapters but they manage to paint amazing mental imagery with nothing but well structured sound. There are few games you can play with your eyes shut. This is one of them.

Thank you for the music, the cars I’m missing

The game starts off simple enough. Cars head in your direction and you can hear them peeping their horn and the engine squealing. The sounds start off distant, to your left and right but get closer and louder until they’re whizzing by/into Donnie. Each new chapter introduces something new to overcome. In one section, your captor closes the car windows which lowers the background noises but also dulls the sound of the incoming vehicles, giving you a shorter time to react. In another section, music plays from the radio which means you’ve got to listen very carefully for the dangers approaching. Later you’re following the directions of a moody Satnav. The plot goes to some wild and wacky locations which I’m not going to spoil here but they all inform a significant change in the game play and audio.

The first 20 chapters of Blind Drive aren’t particularly challenging, offering a leisurely difficulty curve. The most difficult the game gets is when you have to identify 2 different types of sounds, one of which you have to avoid and another you have to steer into. Those last 7 levels are incredible. They throw everything at you, combining everything that happened up to that point as a real test of your concentration and reactions. Rather than crumbling under its own complexity, it shines.

From the very second the game starts though, this game is intense. Like a playable Crank movie, it’s fast paced and edgy. There are sections that feel a little longer than they needed to be but they are few and far between. This is most notable during sections when plot exposition is delivered. 2 of these sections probably could have been pruned down or split up to keep the action rolling. They do little to spoil what is otherwise a very rapidly moving game.

I honestly hope that this spawns a whole new genre of interactive audio video game. While playing, I couldn’t help but imagine the possibilities of the same mechanics but with other narratives in other genres. What developers Lo-Fi People managed to create for Blind Drive is nothing short of inspiring.

Blind Drive is unlike anything else out there at the moment. It’s unique, innovative and hopefully the start of something new. As a proof of concept, this game demonstrates that it’s possible to create an absorbing, exciting experience based purely on sound. As a game in its own right, it’s thrilling, funny and a triumph of audio game design.

We Were Here Forever Gets Consoles Release Date, Cross Play
Horace Review – A Heartfelt, Homespun Adventure
Warborn (PC) Review – Hex Gonna Give It To Ya