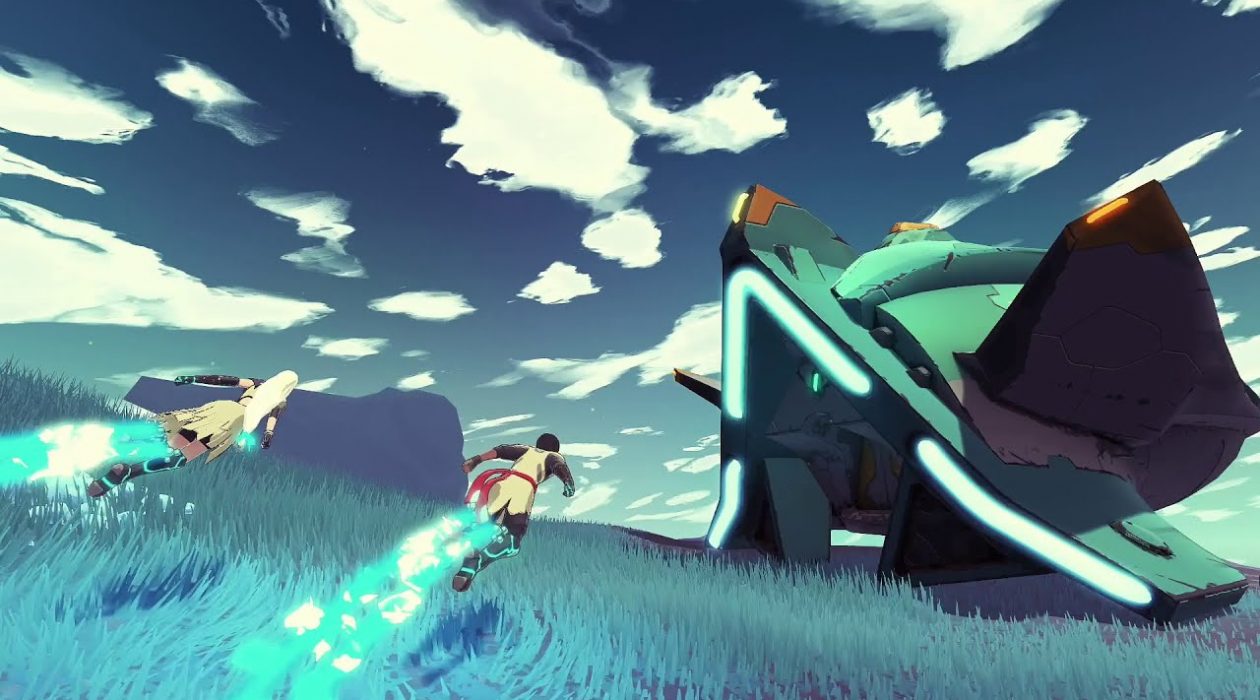 Haven is brought to life by its terrific central pairing, but offers little else we haven't seen before. The Finger Guns Review;

The key takeaway from Haven is its central mechanic is one you don’t often see in video games and yet here, in the latest game from Furi developers The Game Bakers, much like us as human beings, love is the most important aspect, and what binds the entire experience together. Connections, persistence, togetherness above all else. It’s the reason Haven works at all and is all the better for how it handles such a complicated concept.

Few would deny you the chance to have a go on Haven. From the sparkling trailers that caught our interest to the romance-led narrative which seems such a rare commodity in the industry, Haven has enough about it to warrant a playthrough, if only to see what on earth it’s all about. That’s the situation I found myself in and getting lost with your protagonists Yu and Kay was a real delight. On first impressions that joy of Haven is present and correct, exploring the dynamic of a couple lost and on the run, looking for a, well, haven to simply be together, and we’re the third wheel that follows along in the hopes that you can make this singular dream a reality.

And what a beautiful world they’ve discovered too. Settling in their ship/home the Nest (the kind of pad any young couple would die for), you learn about the couples history and why they’re on a self-imposed escape mission from a world that would never allow them to be together for reasons you learn a little later on. Known as The Source, the planet they’ve chosen to reside on is peaceful but fairly empty, so you spend an awful lot of time with Yu and Kay being sappy together, which are really the main highlights of the experience of Haven. Being able to live alongside them in their relative comfort was a welcome reprieve from the major AAA releases before it and those to come. The calm slap bang in the middle of the storm, if you will.

And mostly, it works. The relationship at the centre of Haven is what sticks with me now I’ve stepped away from the game. There’s nobody else around to interact with so you’re at the centre of a couple just wanting to survive with each other and ensuring whatever needs to be done is done. The more relaxed moments of Yu and Kay together are standouts, whether they are cooking together, playing cards or simply helping each other through a difficult nights sleep, the terrific writing immediately allows you to feel a strong bond with them, as their only goal is to simply exist. And when they do exactly that, Haven flourishes.

The backstory that has led to Yu and Kay seeps in some rather bleak world building though which, whilst allowing you to understand why they felt the need to escape, makes for a world that isn’t quite as magical and ethereal as you would have hoped. Upon the colony where they once lived known as the Apiary, Yu and Kay are illegally together due to a matchmaking system imposed on the residents. Yu, the female protagonist was linked with a far wealthier, more powerful mate who isn’t giving her up without a fight, instead choosing Kay to run away with. It’s not exactly Romeo and Juliet in terms of a classic love story, but it’s far more intricate than most game relationships we’re subjected to.

Escaping a world of forced communions and even a mention of ‘recalibration’, or conversion therapy to you and I, that would ensure Yu falls for the chosen ‘mate’ and leaves Kay. The colony seems desperate for Yu to return and be paired off with the one that has been chosen for her, despite her complete adoration for Kay. So much of Haven is bright and lovely and even touching at times, but their enemy seems far bleaker than the narrative can really handle, and at times became somewhat unsettling.

The idea of conversion therapy in this, at least on the surface, beautiful love story seemed at odds with most everything else about the game.

Away from the protagonists, Haven is lovely to look at. Running smooth as silk on PS5, its landscaped and use of colour allows The Source to pop off the screen and the Nest feel like somewhere you’d want to live out your days with the one you love the most. Exploring The Source game me No Man’s Sky vibes, with the palette feeling fairly unique to the surroundings, and the design of Yu and Kay not quite fitting in with The Source works with the idea that they’re fugitives on the run.

But love is the key. Love is all around. Love is an open door. Love will keep us together. Love is on the radio. Wait. I digress.

Yu is never not with Kay, and Kay is never not with Yu. Their connection is solid as a rock and the foundations of Haven are built on the unbreakable bond the couple share. Through combat, traversal (smooth as silk on PS5 with a super handy drifting mechanic) and even levelling up your health (by hugging, no less),there’s little escaping the power of love throughout. The performances by Yu and Kay are good, with their entire dialogue recorded and performed with a chemistry that doesn’t quite match what we’re seeing on screen, though thankfully never grates. Lines are often repeated but it’s hardly a dealbreaker, it’s just the performances aren’t particularly memorable.

I did want to point out the music, which is fantastic and can be listened to here. Composed by Danger, the ethereal indie / EDM soundscapes really bring the world to life, and compliments the relationship of Yu and Kay with aplomb. It’s been soundtracking me writing this review, such is its meditative power. If you’ve already skipped to the score below, rest assured at least one entire point is for the score. Glorious.

The biggest takeaway from any of the Haven trailers has been the traversal mechanic, allowing Yu and Kay to float across the ground at breakneck speeds, allowing ample exploration of The Source in little time, certainly a welcome addition. In order to keep moving you’ll need to find Flow, the resource which can be used to repair a planet’s corruption, fuel and repair your ship and convert it into healing items. You’ll see a number blue streaks of light across The Source (either in the ground or in the air, a little later into the game) and you’ll need to glide through them to collect Flow resources. There’s very little it cannot do so be on the lookout.

There’s a lot to like about Haven, but I’m not entirely sure it’s reached my somewhat lofty expectations. The Game Bakers have clearly thrown everything at the story and the relationship of the central characters, as seemingly everything else feels either tacked on or slightly generic. It’s an open-world esque survival RPG disguised as a speedy action-adventure that has a little too much filler to be fully killer.

The central love story carries you through, and as you start to really care about Yu and Kay, keeping them safe and yearning for them to find the quiet life they crave, you realise there’s very little else Haven is doing as well.

A delightful central relationship gives this love story RPG wings, but generic survival beats and somewhat empty worlds leaves Haven not quite the essential indie experience we were hoping for.