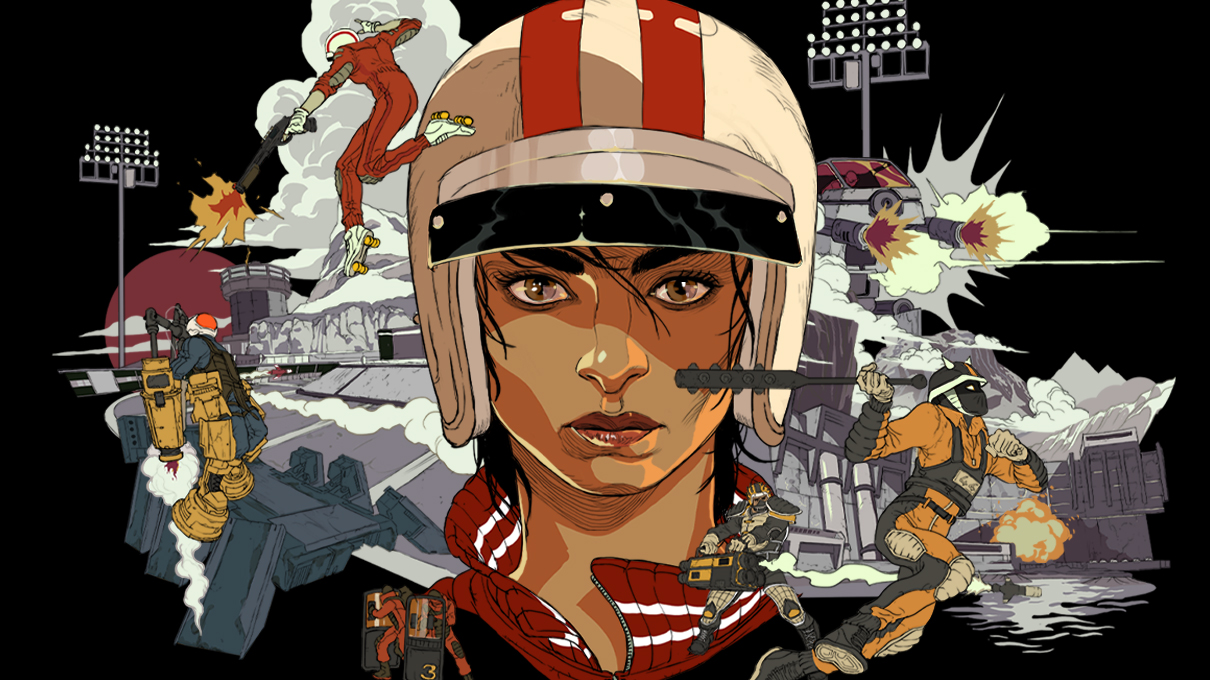 Rollerdrome could be set to be another winner for Roll7. The Finger Guns Preview;

Rollerdrome could be set to be another winner for Roll7. The Finger Guns Preview;

If you put a gun to my head and ordered me to spell out my favourite game genres (I’m not sure why any bad guy would do this but let’s go with it) and which ones I’d like to see mashed up, there’s every chance I’m not going to say ‘Time Crisis and Olli Olli World’. The initial trailer for Rollerdrome (below) was fun but it didn’t capture my imagination, I felt the visuals looked bland and the combat seemed fairly straightforward. I think I would have confused the bad guy more than anything and they would have let me go on my merry way before I ruined their day any more.

Lo and behold, a preview code for Rollerdrome lands in my email inbox and I figured I’d give it a shot. There’s something about wanting to be proved wrong about a game that I’ve held recently. Perhaps in my old age I’m getting far more curmudgeonly and no longer have the desire to play everything that’s thrown in front of me? Whatever the reason, Rollerdrome had its work cut out to get my hyped for its full release next month.

Thankfully, is there something here to get excited about? Something? There’s plenty.

Set in the 2030 – in a Deathloop style ‘retrofuture’, bloodsport has become extremely lucrative, and the lines are blurred between business and entertainment, the general public are enthralled by Rollerdrome, a new sport where life or death is the primary draw. Pitting one player up against ‘house’ enemies, it’s up to you to get yourself out alive each round by skating, flipping, spinning, grinding and shooting your way through each ‘drome’, racking up your scorecount and becoming the new champion of Rollerdrome. If that wasn’t quite dystopian enough for you never fear, there’s a conspiracy surrounding Rollerdrome that you’ll need to uncover as you progress, and with each level turning up the waves of enemies against you, you’re gonna have to git gud fairly bloody quickly if you want to survive everyone’s favourite new TV show.

Fortunately, there’s a fairly hefty tutorial before you meet any kind of enemy to work through which teaches you the basics. If you’re anything like me, long tutorials are always a bit of a pain when you just want to get to the game but with Rollerdrome, I was happy it continued for as long as it did as I generally suck at Roll7 games (it’s true, I reviewed the original Olli Olli years ago and never went back. Not because they sucked, quite the contrary…it’s because I did). Fortunately, your skating/grinding skills only get better over time, and the tutorial showcases the many various ways you can attack each level with speed and precision, all the while racking up those points with in-air flips, spins and grinds to avoid the ever-increasing amount of gunfire coming your way.

You’ll also want to get used to the tricks and the grinding as that’s the only way your ammo will replenish whilst in the drome. If you run out of ammo you’ll need to get yourself the hell outta dodge, get yourself in the air or start grinding to reload your weapon. In the early levels it’s fairly easy to gain distance from the gunfire as the enemy numbers are kept low – snipers will be on you but a quick tap of your dodge button and they’ll immediately lose you – and it’s super satisfying filling up your ammo by grinding around and doing flips. Particularly when you’re shooting an enemy by flipping over them as your ammo numbers increase. It simply never gets old.

And there’s plenty of ways to earn points too, whether it be from how stylish you can make your kills or simply navgiating the dromes to knocking out a list of objectives or goals throughout each level. From unlocking certain combos to mulitpliers and killing ‘War Heads’ (brutes with frickin’ rocket launchers) before they activate their shields, you’ll see the numbers stack up the more you play, and the replayability is frankly gold standard, as it is in all Roll7 titles. You gain health from shooting enemies who drop it for you, bigger enemies will drop more health etc etc..oh and you’ll get extra points if you can shoot rockets that are chasing you out of the goddamn sky. Yeah, that’s also very fun to do whilst wall-grinding or flipping in the air.

Visually Rollerdrome certainly looks the part. I said at the top I wasn’t all that excited about another action shooter with the ‘cel’ comic book visual aesthetic, particular a skater as I very much had my fill of that some 20 years ago. Thankfully ti works well enough here that you don’t really notice it. There’s no getting around the fact the marriage of skating and ‘comic book’ visuals will hit you in the nostalgia feels and also make you wonder what SEGA is bloody doing with a franchise so beloved -if the hype around Rollerdrome isn’t testament to the thirst for a new Jet Set Radio I don’t know what is -, but that’s by the by. I’ve been playing Rollerdrome on PC and it’s absolutely glorious with not a single frame dropped. Granted, there’s not an awful lot going on on screen all at once, but there are moments where gameplay can get particularly hectic – grinding for ammo whilst your health is beeping at you and there’s only rocket wielding Warhead enemies to take down who are vastly more jacked up with ammo whilst snipers are silently following your every move comes to mind – but even in this preview state with only a few weeks away from launch it looks the business and plays brilliantly smoothly.

I imagine you wouldn’t expect anything less from Roll7 and you’d be right, though the dromes themselves aren’t hugely exciting visually, with little detail and only small glimpses of the crowd watching you the closer you get to the windows on the edge of each drome, the design of the enemies is solid and perhaps the less going on in the background the better, as you can focus on pulling off your moves whilst avoiding the aforementioned ‘all the things trying to kill you at once’ stuff that you’re attempting to avoid.

It’s coming straight to PS Plus next month so would I have played it regardless? Probably. Thankfully, I can give it a download when it’s available knowing that there’s a cracking game here, hopefully one that will continue to be supported long after its launch.

Look out for our full review in August right here on FingerGuns.net.

Rollerdrome is due for release on August 16th on PC, PS4 and PS5.

Disclaimer: In order to complete this preview, we were provided with a promotional copy of the game.

20 Indie Games To Get Excited About In May 2021
Curse of The Dead Gods hits consoles next month.
The Finger Guns Podcast Ep. 110 - E3 Hype! | E3 Wishlists and Predictions / Favourite E3 Moments