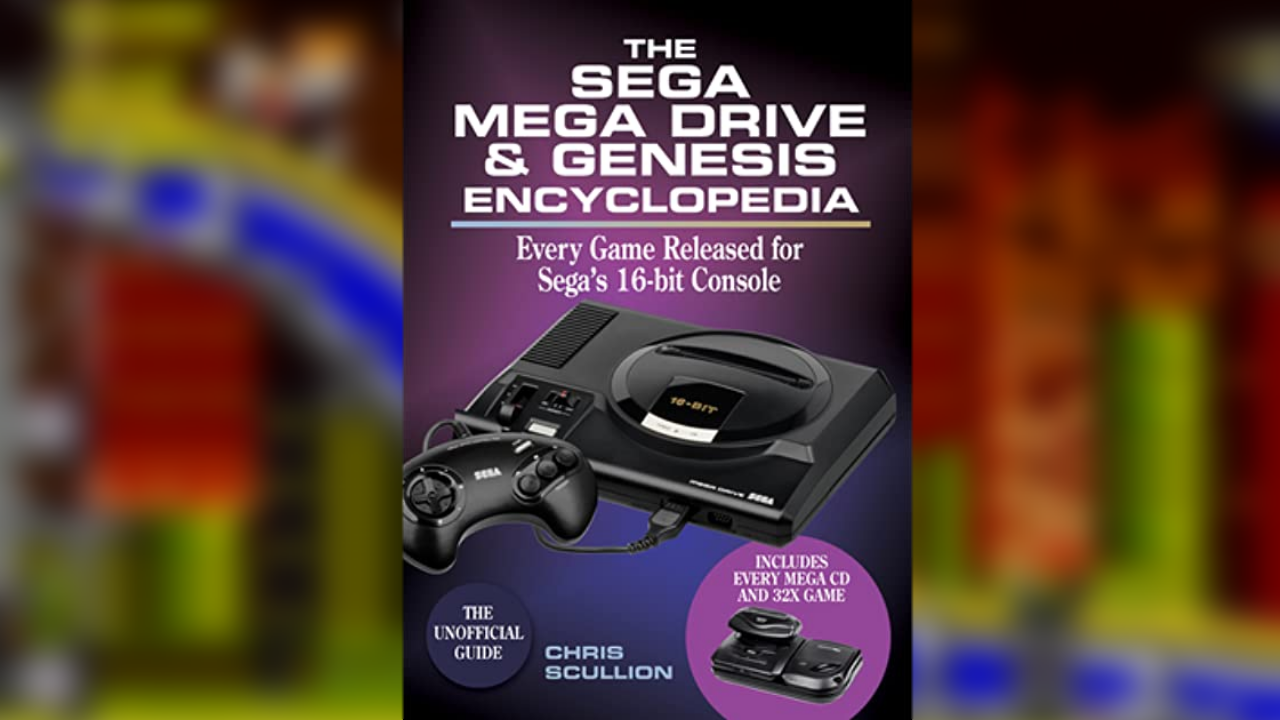 There’s something somewhat unsettling about reading a Mega Drive Encyclopedia written by Chris Scullion. Such a thing is akin to Clark Kent writing for The Daily Bugle. Sir Alex Ferguson leading Liverpool to the top of the Premier League or Damon Albarn joining Oasis. You see, for the longest time I (and I presume many others) have associated Scullion with Nintendo. It’s how I came across his writing for the first time when he worked for the superb Official Nintendo Magazine. I’ve no doubt the majority of his following are from those heady days (remember when Sonic appeared on the cover of ONM for the first time? Utter chaos), he’s naturally branched out to cover the industry as a whole via his work for VGC and his own venture, Tired Old Hack.

Regardless, this is dogs and cats living together, Chris Scullion – for the third in his Encyclopedia series – will eventually write a paragraph for every single game that’s ever been released and we’re just going to have to make our peace with that.

If you’re familiar with Scullion’s writing, you’ll be all too aware that it feels more like a conversation than a lecture. One thing I’ve always admired about his writing is his to make what you’re reading feel like you’re talking to him over a table at a cafe, as he draws you in as a reader ensuring that he’s never talking down to his audience, rather sharing his knowledge on something he’s clearly an expert in. The Mega Drive and Genesis Encyclopedia is no exception. These books are behemoths and the preservation of these classic games is something he clearly takes very seriously. That he can take on these giant projects and still make it feel like he’s talking directly to you in his calm, easy going style is one hell of a talent.

The Mega Drive and Genesis Encyclopedia features the entire western Mega Drive / Genesis catalogue along with the Mega CD and 32X across its 285(!) pages. Each game is presented with a single screenshot and a fun trivia extra. Did you know that 1995 Mega CD music visualiser Flux was used to provide visual effects on the Pyramid Stage at Glastonbury? The more you know, the more chance you’re going to get 10/10 on our weekly podcast quizzes (though only if they’re primarily focused on obscure Mega Drive knowledge that you’ll only ever learn from the mind of Chris Scullion). As you would expect the layouts are clear and concise in alphabetical order, with a hefty index at the back if you’re looking for a particular game. My favourite game of all time is Sonic 2 so I went directly there to see if this piece of trivia was what Scullion included. Alas, whilst I was delighted to see Sonic 1 and 2 – arguably the console’s biggest games – were blessed with half page write-ups, it was not. It hurt a little, but then I remembered he probably doesn’t know this about me. One day.

Each entry offers information about each game, along with its developers, publishers and which region each game was released in. Again if you’re familiar with Scullion’s writing, you’ll know that nothing is ever half-assed, and it’s so clearly evident he has a passion for ensuring the detail he writes about is informative as well as entertaining. It would have been easy for any writer to phone in writing a paragraph or two about dreadful games that found their way to the Mega Drive, but that’s not his style. Instead, every game has its moment in the spotlight, though naturally bigger releases get a little more space to breathe (the aforementioned Sonic 1 and 2, for example).

If nothing else it feels like an education from the coolest teacher you had at school. I say coolest, in this particular context if you want to go find out information about what on earth Lemmings rip-off The Humans is all about, the person who would have that knowledge stored somewhere in his brain is Chris Scullion. The Mega Drive will always hold a special place in my heart because, not only was it the launch console for my favourite video game, but the sheer amount of classics it holds (Columns, Streets of Rage, Hang-On, classic FIFA, Earthworm Jim, Ecco The Dolphin etc…) ensures this is an Encyclopedia that’s absolutely essential for the retro gamer in all of us. If nothing else, it reminded me of games I had forgotten all about, and suddenly that nostalgia hits you and out loud I’d proclaim ‘oh shit, I’ve played this’.

I lost hours to WWF Royal Rumble back in those days, playing with my friends until we were told to go to bed. That memory unlocked because of this book. Eternal Champions, The Chaos Engine, Jimmy White’s Whirlwind Snooker among many others all came flooding back to me. Remembering my Mum throwing the controller up when she was trying to get Cool Spot to jump. Showing Dad Virtua Racing for the first time and watching his mind being blown by the untouchable power of the Virtua Processor. Simpler times, and here they are stacked on top of each other in a book I can seek out whenever I need that memory jolt.

I have a different connection to this particular Encyclopedia rather than his two previous entries in the series (namely the NES and SNES Encyclopedias) purely because I hadn’t owned a NES or a SNES. I was a pure SEGA kid from the Master System all the way to the Dreamcast. What I didn’t own though, was the Mega CD.

Among many other things in this book, something I learned was the sheer amount of games released for the ill-fated add-on. Over 150 games are featured in this section, again with explicit details, screenshots and trivia. It boggles the mind what rabbit holes Scullion would have had to go down to recover knowledge such as the Mega CD version of Chuck Rock had to be censored due to butt cheeks in the FMV intro. Glorious pub quiz knowledge. Well, for a very specific type of pub quiz, one would imagine.

The 32X section is naturally, much smaller – an add-on for the Mega Drive that would allow you to play 32-bit games, released in the US the day before the Sega Saturn launched in Japan so, yeah… – but again Scullion takes the time to show each and every game the same about of love, and is all the more interesting for it purely because it’s an area of my gaming knowledge that’s somewhat bare, purely because I was far too excited for the SEGA Saturn (Panzer Dragoon, lads). SEGA were always somewhat ahead of their time (the Dreamcast with a broadband connection would have absolutely slayed and you know it), but some could argue the 32X was just a little bit too late to make the impact Sega were hoping for.

In nearly 300 pages of Mega Drive and Genesis goodness, it’s difficult to find any real issue with what’s on offer here for your £30, and those who owned the system will be delighted. The sheer amount of games released for the Mega Drive and Genesis suggests this would have been quite the undertaking, and I commend Scullion for even attempting it. Lord knows what he’s gonna do if the PS2 Encyclopedia ever rolls around. There’s every chance casual readers may find the hundreds of games represented slightly overwhelming, but rest assured the writing style of Chris Scullion is easy, full of detail and as entertaining as ever. You’ll struggle to put this one down.

There’s plenty of life in this tired old hack yet. If this is the kind of quality level we can expect, let’s not pretend it isn’t super exciting to see Chris Scullion spread his wings away from Nintendo.

An exhaustive, tremendous look back at one of the most beloved consoles of all time, The Mega Drive and Genesis Encyclopedia is an absolutely barnstorming recollection of a wonderful era.

The Sega Mega Drive and Genesis Encyclopedia is available now from Pen and Sword.

Disclaimer: In order to complete this review, we were provided with a promotional copy of the book. For our full review policy, please go here.

25 Years of Tales Celebration - But What Are Bandai Namco Building Up To?
Sunlight Review (PC) - A Day In The Woods
Crash Drive 3 Review (PS5) – Stunt(ed) Growth