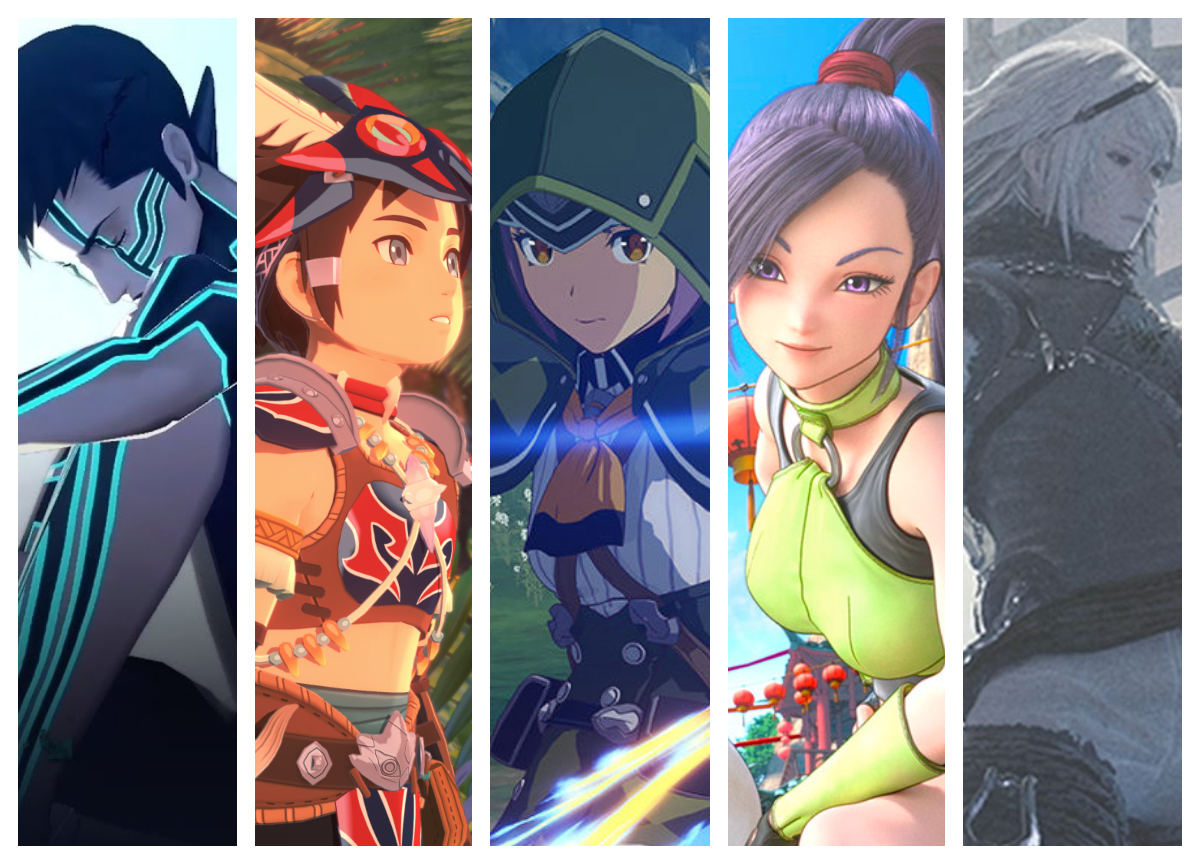 Our first list clearly wasn't enough, so we are back with another 8 of the biggest and best-looking RPGs slated for the next year or two that we can’t wait to play!

If you’ve stolen the last heart in Persona 5 Royal, or ridden your bike out of Midgar in Final Fantasy 7 Remake Episode 1, then you are probably looking for your next JRPG fix just like I am, wondering when you can next forget about the world, and get lost in another wonderful story. Well, have we got the list for you!?

The first list of 8 JRPGs clearly wasn’t enough, so we are back with another list of the biggest, baddest and most beautiful JRPGs (or as close as) for you to salivate over for during the next year or so. Some are imminent releases, some only announced this past week, or shown at TGS 2020. But each and every one looks fantastic and we can’t wait to play. On with the list.

So this is an HD remaster of a classic, far more obscure in the west than it was in Japan. Shin Megami Tensei III: Nocturne, renamed SMT III: Lucifer’s Call in Europe, was released in 2003 on the PS2, and was the first in the SMT series to make it to American and European shores in 2005.

It was famous over here both for being very difficult and for having a strange crossover – Dante from Capcom’s Devil May Cry series made an appearance, confronting the player character, who has been turned into a demon in post-apocalyptic Tokyo. You’ll be glad to know he returns in the new HD Remaster as a boss.

SMTIII: Nocturne was a strange mix of Pokemon and Persona gameplay and it will be very interesting getting a chance to struggle through its creepy abandoned Tokyo once again in HD, after so many years with the Persona spinoff series. I remember an early area very vividly – this spooky empty hospital infested with demons – it has haunted my dreams often in the years since.

Bravely Default II must be the cutest looking JRPG set for release over the next year. Coming from the same team as the original game, BDII is a new story on a new world, and is not linked to the original two games on 3DS, so you can jump in here without having played those.

Set on the continent of Excillant, which has five kingdoms, the game’s story revolves around Seth, a young sailor; Gloria, a refugee princess; Elvis, a travelling scholar; and Adele, a young mercenary. Elvis’ English voice sounds truly annoying, but let’s hope it grows on you.

The Brave and Default battle system returns from previous outings, and the game is said to feature a massive job system, where you can steal and earn jobs from enemies! BDII was also meant to release this year, but having heard no new info during TGS2020 this last week, that is looking unlikely. It did very recently receive a rating though so, here’s hoping for 2021. Check out the drop-dead gorgeous gameplay and story trailer below.

The long-running series Dragon Quest is back once again, with the Definitive Edition of the eleventh main game that first appeared in 2017. A bit like Persona 5 Royal, this definitive edition brings new story sections, new battle mechanics, and new quality of life enhancements to the game.

The story follows a young hero who discovers he might be a Luminary, a legendary hero chosen by Yggdrasil (the Norse World Tree) to save his world from evil. What’s really fantastic in the new definitive edition is the ability to switch the game from its wonderful Toriyama characters and art, into the 2D top-down sprites and world of the original retro games! And you can play the whole game like that.

Many will already know and love this title already, but this time around it is also coming to the Xbox One for the first time, and will be included in Xbox Game Pass for subscribers. Releasing on the 4th December, this is another JRPG experience that isn’t that far away!

Maybe testing the boundaries of RPG, and still pretty unknown at this point, Lost Soul Aside was first teased back in 2016, with its Final Fantasy mixed with Devil May Cry style and fantastic character designs. It was originally being made by a one-man team, but has gone from strength to strength over the past four years.

Nothing much is known about the story at this point, beyond what you can see for yourself in the epic trailer below from 2018. New battle gameplay was shown this year, just a month or so ago, so the game is still happening.

Lost Soul Aside has received grants from Sony and Epic, and has is now being put together by a 14 person team and vastly expanded. It was first slated for 2018, then 2020, but with no more news at any trade shows this year, it’s likely slipped to 2021 or later. It’s like waiting for a new Game of Thrones book.

Another re-released remaster, Square Enix’s Nier Replicant, is an enhanced version of the Japan-only release on the PS3 back on 22 April 2010, and now has a release date almost day-for-day 11 years later, on 23 April 2021.

The return to this action RPG makes perfect sense after the incredible success of Nier Automata – it was probably a no-brainer that this get a full-remake and re-release. Interestingly the original game came in two flavours, Nier Gestalt on Xbox 360 and Nier Replicant on PS3 – the difference being the age and look of the main hero. Neir Gestalt with its older grizzled hero arrived on Xbox One in the US as simply ‘Nier’, while Nier Replicant, with its younger more androgynous hero, only saw a Japanese release.

It’s near universally agreed that Nier Automata was incredible and I can’t wait to get my hands on Replicant when it releases on PS4, Xbox One and Steam next April. I missed this the first time around, so this will be a real treat. Check out the brand new trailer below.

The Legend of Heroes: Trails of Cold Steel IV

Unlike most of the series on this list, Trails of Cold Steel is a continuation of a story close to seven years in the telling, and diving in at Cold Steel 4 is probably not recommended, especially as its narrative starts just weeks after the end of Cold Steel 3. Thankfully the whole Cold Steel arc from 1 through 4 is available on PS4.

The Trails series actually consists of 9 games in a 3 series arc going back to Trails in the Sky in 2004, which was itself the 6th Legend of Heroes game, (not all are available in English) that all culminates and ends with Cold Steel 4. As such I have no hope of explaining the story at this point.

However if you fancy finally diving into at least the Cold Steel arc, the final game in this turn-based continent-spanning epic of war and sacrifice arrives in the west on October 27th 2020. You can find the previous episodes on the Playstation store. Cold Steel comes from Falcom, the same studio as the Ys games.

Instead of TGS 2020, new details for Blue Protocol came from the CEDEC 2020 just two weeks ago. Blue Protocol is Bandai Namco’s new cel-shaded foray into the MMORPG space and looks fantastic. Check out the video below for some very stirring music, and incredible world on offer here. Half fantasy, half tech, it has some flavour of Star Ocean for sure.

On the planet Regnus, the world of Blue Protocol, the ruins of an ancient civilization cover the landscape. Their culture has been relegated to nothing more than myths and stories. It is your job to uncover the mystery of this ancient race, find ancient technology and make your fortune!

No definitive release date yet, but the game has had a closed Beta, and is likely to release in Japan in 2021. Bandai Namco have said they are looking to bringing it West, and have hired English directors etc. They supposedly used cel-shaded graphics in this and Scarlet Nexus, because it works well overseas! Finger Guns firmly crossed.

Announced just a week or so ago, Monster Hunter Stories 2: Wings of Ruin was revealed during TGS 2020 to be an RPG in the world of Monster Hunter and using all the well known and beloved creatures and lore.

Monster Hunter Stories 2 will have a deep narrative and the ability to ride and raise the monsters you capture. You play as the grandchild of the legendary Rathalos rider, Red, and are just starting out as a Monster Hunter. The Rathalos seem to be almost extinct and the story revolves around your adventure with a young Wyverian (think MH Elf) called Ena, who seems to have possession of the last known Rathalos egg.

Capcom promised Monster riding, but not much more is known right now about battles, or how RPG-like it really is. They did say that there are links with Monster Hunter Rise, and gave a release window of Summer 2021 on Nintendo Switch, so we shall see what the coming months reveal. Monster Hunter World was fantastic, but it could have been made better with a great story – let’s hope Wings of Ruin delivers!

So that’s another incredible set of 8 more JPRGs slated to release in the next year or so. Check out our first list of 8 for any you think are missing, or hit me up in the comments if you think I’ve still managed to miss one! I want to know about it!