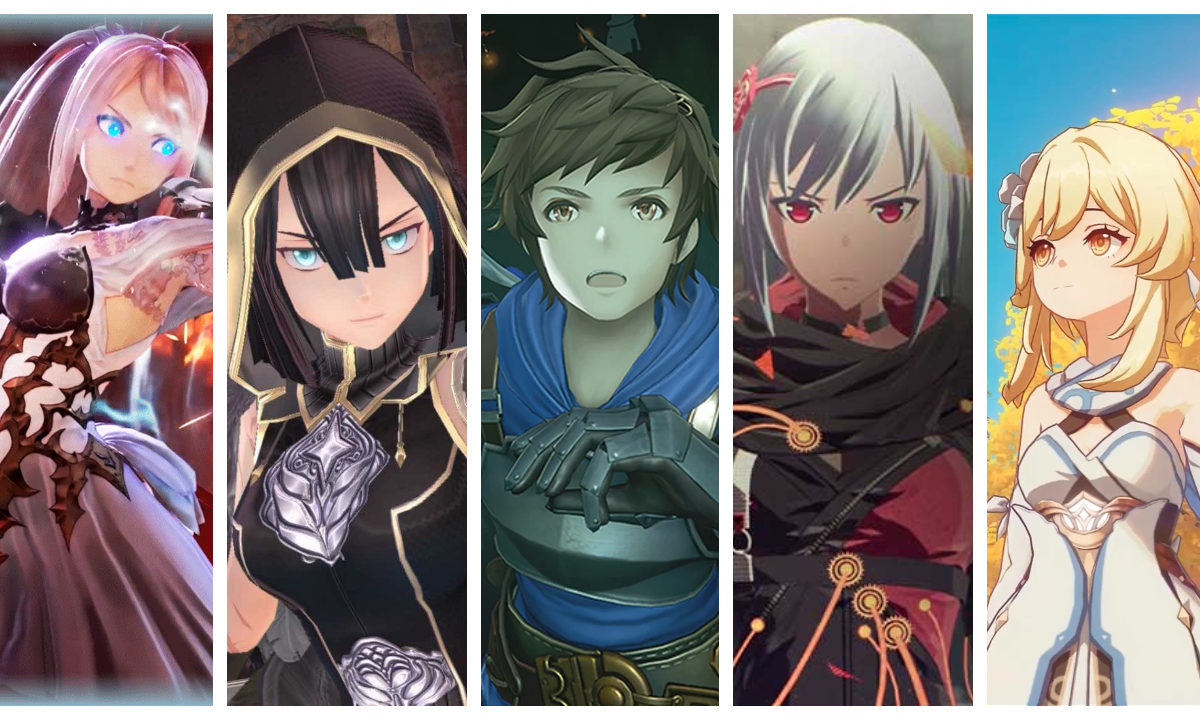 So I’ve finally finished Persona 5 Royal after 130+ hours and I’m looking through announced games for my next massive JRPG fix. If you’ve also stolen the last heart in P5R, or ridden your bike out of Midgar in Final Fantasy 7 Remake Episode 1, then you are probably looking too, wondering when you can next forget about the world, and get lost in another wonderful story. Well, have we got the list for you!? Only 8 of the biggest, baddest and most beautiful JRPGs looking to sap every hour out of your life in the next year and beyond. These have all been announced and shown gameplay (except one), so I won’t be talking about pipe-dreams like Persona 6, but we can now talk Final Fantasy 16!

Before we even go any further with this list of up and comers, you owe it to yourself to check out our review for 13 Sentinels: Aegis Rim, the imminent release from Atlus and Vanillaware coming to PS4 on 22nd September. It’s a narrative extravaganza, merging the mind-bending sci-fi of at least three Christopher Nolan movies, with the mech and kaiju epics of the anime scene in the 80s, and features 13 lovable characters, as interesting and unique as any in the Persona cast. Piece together the fragments of the past and wage war on the kaiju as commander of a squad of mechs. It is astoundingly good, scoring a 9/10 from us here at Finger Guns.

So first up, because it’s likely the first to see release is Genshin Impact, the infamously too-much-like-Breath-of-the-Wild RPG from Chinese studio MiHoYo. Last seen in August on the Sony State of Play, Genshin is self-described as a free-to-play, open-world action role-playing gacha game, that wears its influences on its sleeve. It’s got gorgeous cel-shaded artwork and a world that emulates Breath of the Wild in style, however the content of the game is anything but.

This is the game, that when announced, and because it looked a bit like Breath of the Wild, prompted a few very strange individuals at a convention to smash their PS4s on the floor in protest. Personally I think it looks just as much like the last 3 or 4 Tales of… games.

Both single player and co-op with a four party team, Genshin features element-based combat and special moves where you can combine elements for big damage. There’s some 20 characters, and they say, more to come – this is where the Gacha comes in. Gacha is the Japanese toy dispenser machines with a different tiny toy in every spherical pod. The idea I think, is that you can earn, or more likely buy, your favourite Genshin heroes for use in the game. I hope, despite it being free-to-play and monetized, there is still an epic storyline to discover.

Currently we know that you play as the traveller, male or female, and the quest revolves around finding others who share the same element power and ultimately understanding the truth behind the primordial gods of the game’s world. Exciting!

So Granblue Fantasy Relink is the second of two games that were promised for console a few years back, by Granblue developers Cygames. What’s even cooler is that for a good portion of development PlatinumGames (of Vanquish and Bayonetta fame) were also involved. Granblue is a big deal on mobile where the original game has been making the rounds for years now.

Combining the music of Nobuo Uematsu (Final Fantasy) with the art director Hideo Minaba (FF 5,6,9), and an epic globe-trotting story, Granblue recently had a release with Granblue Fantasy Versus, a very pretty 2D beat-em-up that Greg reviewed.

Not much about the JRPG’s story is known so far, but we do know it involves the same world as the mobile game, and a new side story set in a new Skydom (like an aerial kingdom). The game features some intense and over the top action RPG gameplay that looks to be very much real-time, and combat heavy.

Cygames have teased that there will be a reveal and release date announcement in December 2020.

So we are anticipating a early 2021 release for Scarlet Nexus, a very interesting new sci-fi RPG from Bandai Namco, and a major departure from its well-known flagship series, Tales of. Scarlet Nexus is an action RPG sure, but its not the cel-shaded fantasy of Tales. Instead the world is fully sci-fi, and instead of magic, its superpowers.

Scarlet Nexus is set in a world where cyberpunk brain-interface technology is a reality, and the story revolves around the discovery of a psionic hormone in the brain that gives bearer’s ESP and psychokinetic powers. Everyone likes the word Punk at the moment and Bandai are describing this one as ‘BrainPunk’.

As Yuito Sumeragi, its your job to use your new psycho-kinetic powers to save the world from a weird alien threat. You can tear apart the environment in cyberpunk Tokyo and literally throw it at your enemies. Sounds like Control powers, in a JRPG version of Watch Dogs and Cyberpunk 2077.

As a massive fan of the Tales series I can’t wait for this one.

Until the recent release of Ys Memories of Celceta, the Ys series had largely passed me by. However that game was great fun and the promise of the western release of the brand new 9th in the series has got me hyped.

Another chapter in the long-running tale of Adol Christin, Monstrum Nox sees Adol arrested and incarcerated in prison city Balduq, and awaken to a new power. There he meets others with similar Monstrum powers and together they become the only hope for the city as it is taken over by the shadowy Grimwald Nox.

The coolest thing has to be the fully traversable city, with each member of your team having a different power for you to use to get around. Some can even run up walls and fly. The Ys series is about good simple fun, and the battle systems favour quick fingers and Tales-like power-ups. We can’t wait to roll and dodge our way around this one when it releases in 2021 on PS4.

So, just this Wednesday gone, the newest in the long-running and badly named Final Fantasy series was announced, slap bang at the start of the PS5 Release date reveal event. Like many I felt Final Fantasy 15 held much unrealised promise and was sorely disappointed a few years back when I got to the end and realised the story was a broken mess.

But a few years have passed, my burning love for Final Fantasy has been stoked once again by the jaw-droppingly awesome remake of FF7, and I am ready for 16.

We don’t know much about Final Fantasy 16 yet, only what we’ve seen in the trailer above, but we can piece together a few things. Summons are back with a vengeance, and combat looks to be similar to FF7R, although at a distance and without playing it its hard not to be worried it could be like 15.

The story seems to revolve around a much darker fantasy world than usual, with elements of western RPGs and a tangible feeling of the Witcher 3 to proceedings. It’s got some of the Ivalice, FF12 and Tactics vibe to it as well. Our heroes must protect young heir to the throne Joshua, who is entirely unprepared to deal with the powers that seem to be bubbling up within him. There’s plenty of political machinations happening, and mentions of Mother Crystals, Dragoons, Chocobos and Shiva. We can’t wait, but this is likely to be a few years away. Hell, we might get 7 Remake part 2 before this.

Another with a darker more brooding aesthetic than we are used to from the Tales series, is Tales of Arise. Bandai Namco originally said this one would be out this year, but it has since slipped to a probable 2021.

Two planets visible in each other’s skies, two civilisations colliding in war and political upheaval, and two heroes, Shionne and Alphen, who must forge a path to peace. One world Rena is far more technologically advanced than the other, Dahna, and treats it’s people as slaves.

Every Tales game gives it’s battle system a new name, and with the Linear Motion Battle System, the much-beloved Tales combat is back. We hope that there will be new gameplay and footage from this one in the coming months, when its likely to suddenly become a PS5 title as well as its projected PS4.

So Persona 5 took over my life for months, and those characters have become a very familiar and much-loved cast. Imagine then my great delight to realise that the upcoming Persona 5 Scramble wasn’t just a dancing game like Dancing in Starlight – it is in fact a fully-fledged sequel!

Teaming up with Omega Force – the devs behind Dynasty Warriors – P5S has a completely overhauled Musou battle system, based on the Warriors franchise, but a story that is a complete sequel set 6 months after P5R ended. The Phantom Thieves return to Tokyo in their summer break after reports of someone new changing hearts in the city.

I have been a fan of the Warriors games for many years, although they get a bit samey after a while, and require a big commitment for a platinum, but the idea of combining the two has caught my interest.

And I suppose, with it slated for a possible March 2021 release, that I will have had enough downtime to be happy to dive back into P5 once again!

We’ll end with Shin Megami Tensei V, the truly strange and dark demon series, and a game teased and announced back in 2017 at the very beginning of its development cycle, along with the launch of the Nintendo Switch. We are still waiting, but recently the game has been confirmed as progressing nicely and a worldwide release to be happening in 2021.

We still don’t know much about Shin Megami Tensei V apart from the basics. It continues the turn-based combat and much darker tone than its Persona series offshoot. Demons have invaded Tokyo and supposedly this installment brings back the demon raising and fusing earlier games were known for.

SMT III Nocturne is also being remade and released in 2021 – Atlus are going to have an insane year.

And lastly, two honourable mentions, only because there’s nothing much to go on yet.

Eiyuden Chronicle smashed its Kickstarter recently by around 9x its initial ask at $4.5 million funded. Its from two of the team behind the legendary Suikoden series, and features the same ideas – 100 characters to find and recruit, an epic story of sacrifice and war, and a base to personalise and fight from. Don’t expect this until at least 2022.

Project Athia was teased at the original PS5 reveal event in June and we only got a few seconds, but it was gameplay and it looked very cool. Square Enix have this going on at the same time as FF16, but this one looks less finished and more nextgen. Check out the trailer, and again, no way before 2022.

These are the ones I’m interested in, but did I miss a massive release? Let me know in the comments.