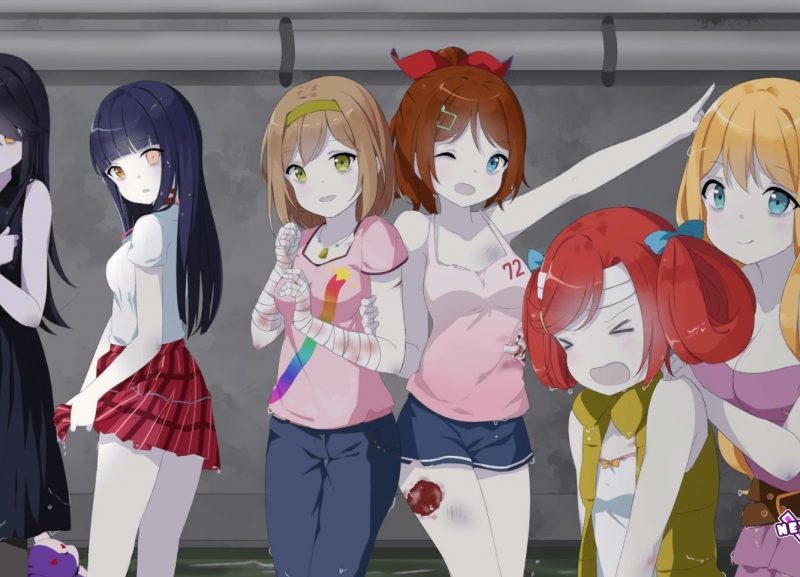 An interesting combination of post apocalyptic dungeon crawler and cutesy visual novel, Undead Darlings is an oddly endearing game that’s a little too drawn out. The Finger Guns Review.

When Undead Darlings ~no cure for love~ was first pitched to me for review, I thought I’d enjoy half of it. A combination of dungeon crawler and “sexy” visual novel game involving “cute” zombies, I thought I’d at least like the dungeons. I enjoy a visual novel as much as the next person (probably more so) but the broad stroke summary of the visual novel aspects didn’t seem like they’d be my cup of tea. I was wrong. In fact, I’d say my experience with Undead Darlings is exactly the opposite of my expectations.

Undead Darlings ~no cure for love~ begins as the main protagonist Reginald P. Happenstahnce, a young man and son of a scientist, awakes to find the world in ruin. While he slept, a zombie outbreak ravaged the world and Reggie had slept through it all. This isn’t your typical zombie apocalypse however. While many people infected by the zombitis go full on shuffling dead people, some people don’t transition into stereotypical brain dead brain eaters. They become half-zombies. Certainly dead, but retaining their own personality and still capable of conscious thought. One such half-zombie is Pearl, Reggies friend since childhood and the first person he speaks to after he wakes. Having caught up on the end of the world, the pair of friends set out to take the same journey their fathers have taken – deliver the only known cure for becoming a zombie to a place where it can be mass produced.

All of the plot in Undead Darlings is delivered in typical first person visual novel style. Everything is delivered via Reggie’s point if view and while good ol’ Reg is a silent protagonist, every other character is voiced (with some impressive and charming performances, might I add) in the game. The supporting cast feel almost too prominent to label as such. Over the course of the game Reggie teams with 6 half-zombie darling girls and a survivalist who acts as a vendor and guide, each of which is unique.

During Undead Darlings, Reg (and the player) get to learn about the history of each of his undead zombie protectors as he gets to know them more closely. While the game does get a bit cheeky some times, stopping short of creepy as some visual novels can stray into, the dialogue and plot are surprisingly fresh, funny and smart. There’s the occasional moment when the game peaks over the 4th wall with self-referential humour that riffs on visual novel tropes. The characters might look like they could wander into any number of other kawaii VN games but they feel really at home here with dialogue that’s certainly corny and cheesy at times but heartfelt and enjoyable at others.

Throughout the game, you’ll also have plenty of opportunities to make dialogue choices, either during the mandatory story sections or by optional event scenes found in the dungeons. These choices effect how fond each character is of Reggie with the possibility of romantic connections being made over time. These choices also affect the end of the game with 9 endings available depending on the choices made and relationships formed with the 6 Undead Darlings. The plot drives towards these endings consistently and it’s worth the extra effort needed to get the best ending. To say I was pleasantly surprised by the visual novel aspect of this game would be an understatement.

If all you can do is crawl, start crawling…

Then we come to the dungeon crawling element, the one aspect of Undead Darlings I fully expected to enjoy. This part of the game is very traditional in its presentation, harking back to the likes of Might and Magic. Each of the games 20 dungeon floors, broken down into multiple themes, is laid out with a grid. You can move through this grid, space by space, in any of the cardinal directions and turn without penalty. These dungeons, auto-mapped as you move, contain monsters to defeat, secrets to find, loot to collect and objectives to reach.

The unique twist here is that while Reginald P. Happenstahnce does delve into the dungeons, it’s not the protagonist that does any of the fighting. Instead he acts as the “loot donkey” for a team of upto 3 of the 6 Undead Darlings that fight on the front line and prevent him from getting infected. Each battle –  presented as progress blocking zombie cupcake icons in the dungeon area or as random encounters – is turn based with normal attacks, special attacks and plenty of strength and weakness tactics to consider. These battles take place against a rogues gallery which is about as tonally jarring as any game I’ve ever played and miraculously, not as many as you would think are actually zombies. Eggs with elemental effects, cups, food, and some things I can’t hope to comprehend are joined by humanoid enemies like an elderly zombie lady impaled by a sign that reads “Rump ‘n’ Dump”. Yeah. I know what you’re thinking. My eyebrow has been raised a few times while playing this game.

There are a massive number of interlinking systems at play here, many of which are standard for RPG’s. Experience is gained during battle (so long as the Undead Darling’s hit points have not reached zero). This experience results in levelling up which increases the stats of the half-zombie fighters which, as you might expect, change damage done, damage received, speed etc. Health and a resource that is basically mana have to be managed via items or sparing use of certain attacks. It’s all pretty standard fare.

No Need To Get All Broken Up About It

These typical aspects are joined by some controversial ones – weapon degradation being the main one. Each of Reggie’s horde/hareem of zombies can use certain weapons which, when used as part of an attack or special attack, will degrade in quality until they break.  A broken weapon will still hang around until a battle has finished but once the fight has ended, the weapon will turn to scrap.

In this zombie apocalypse, Scrap is the most precious of resources. Outside of dungeons, this scrap can be spent at a store to repair weapons, upgrade Reggies’ carry capacity, purchase certain items and more. The primary method to obtain scrap is by destroying weapons via use or breaking them down – but here starts a wrinkle.

At the start of the game Reggie really can’t carry much until he has enough scrap to upgrade his…I’m guessing he carries all of his weapons in a shopping trolley? Anyway, this carry capacity isn’t just for weaponry. It’s also used for consumables like healing items and buffs among others. What’s more, each type of item takes up its own slot (but you can carry more than 1 of the same type in a slot). The juggling act between loot and consumable can be all consuming at times. Until the lamented-ladies have beefed up and can match the challenge of each floor of the dungeon ahead, the balancing act of keeping the massive amount of loot that is thrown at you to break down or use later against consumable items which will extend this particular run feels at odds with itself. The most irritating thing is that dungeon escape items which transport Reggie and his semi-deceased darlings to the surface can often be in short supply. This means that unless you can scrounge one on your journey, you’ll have to turn back far earlier than you’d maybe like, to make sure you can make it to the surface in one piece.

So much of the dungeon crawling boils down to resource management that it starts to feel like a grind quite quickly. After a while, the crawling becomes simply an inconvenience between the far more enjoyable visual novel sections of Undead Darlings. Sure, I don’t think I’ll ever get used to the player character flirting with a zombie but there’s an endearing charm to the dialogue and art work which is quite pleasing on the eye.

One moment it’s cute and funny and the next it’s dry and drawn out.  A peculiar mix of engrossing visual novel and average dungeon crawler, Undead Darlings ~no cure for love~ will please those who have the patience to push through its moments of drudgery. For everyone else, a purer form of each genre might be more entertaining.

Undead Darlings ~no cure for love~ is available now on PS4 (reviewed on a standard PS4), Xbox One, Nintendo Switch and PC.