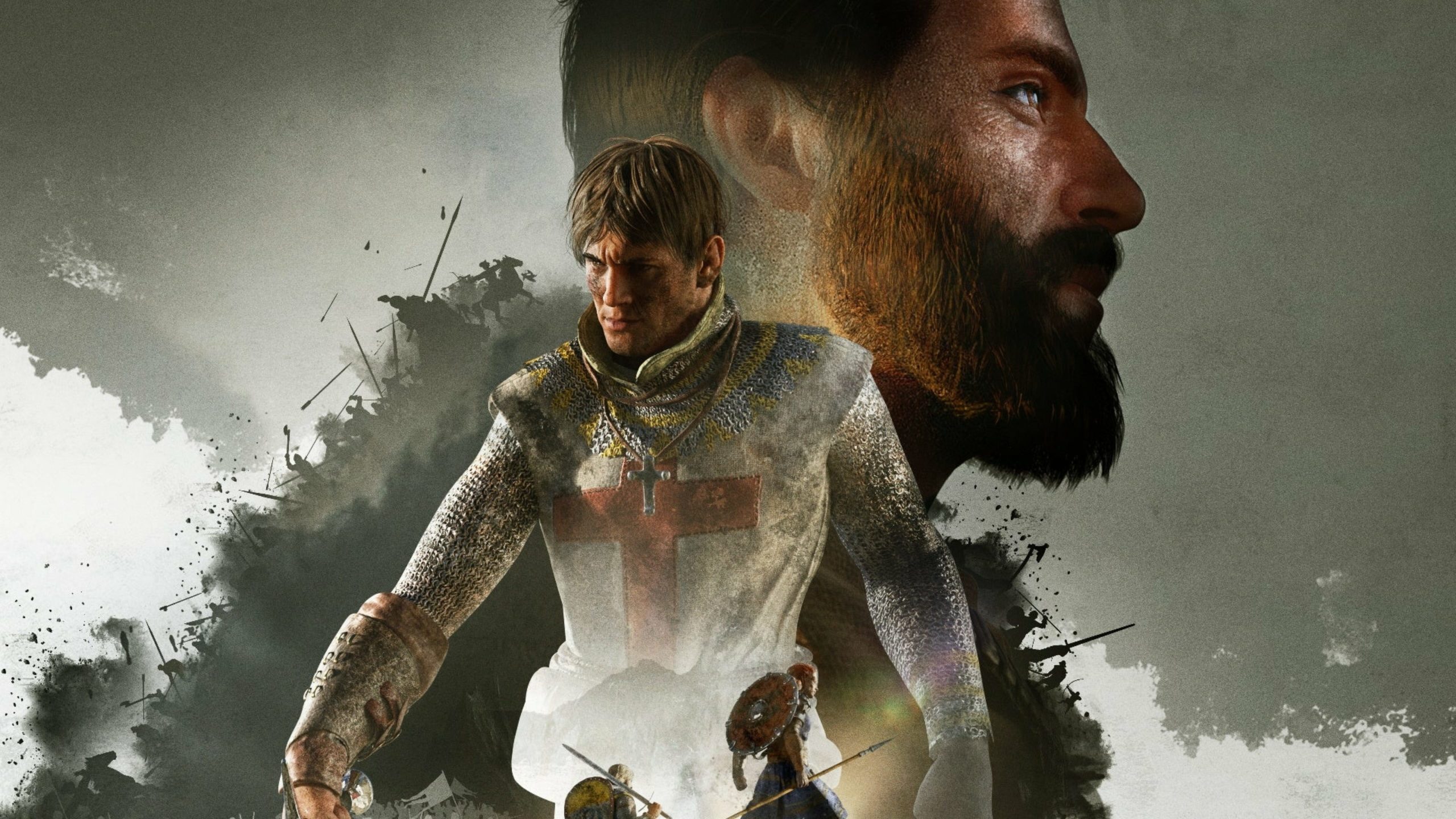 The Valiant is a noble effort to deliver a medieval squad-based RTS, despite some simplistic gameplay. The Finger Guns review.

One of my favourite series as a kid was Stronghold. The medieval setting, the clash of swords and shields, the whistles of crossbow bolts and arrows. Something about the whole setup has always hugely attracted me and I lost weeks of my life living out my crusader fantasies.

KITE Games and THQ Nordic have ticked almost every box for me with The Valiant then. A squad-based RTS set in 13th century Europe and the Middle East, it has all the medieval knight clashing I could ever dream of.

While I can’t build the veritable fortress of my wildest imagination like I could in Stronghold, it would at least deliver the same thrill of Holy bloodshed. Is this crusade worth journeying through the desert for? God aid us brother, let’s find out.

The Valiant is split into 3 core modes: the single-player campaign, a cooperative 3-person squad mode and traditional RTS PvP. I spent the bulk of my time crusading in the name of the Templars via the single player campaign, so let’s start there.

Comprised of 16 missions, taking place across both Central Europe and the Middle East, you follow the Knights Templar Theodoric, a man who says “brother” more times than you’re likely to breathe today. One of his fellow Holy knights has been corrupted by the power of an ancient relic while slaughtering the locals of the Middle East and it’s your quest to put a stop to his mad reign.

It’s a more comprehensive story than I was expecting, with frequent cutscenes, dialogue breaks and end-of-mission exposition delivered by one of your companions. It’s not particularly amazing and can descend into the realm of crusader circle-jerking, but it’s good. It makes sense and provides a suitable structure for the missions.

Each level has mini objectives that unlock after you first complete them, encouraging you go back and replay if you want to master it. Moreover, as you progress you’ll level up the various heroes you enlist upon your quest, unlocking new abilities and equipment for them. Where applicable, you can select which heroes to take to the field of battle with and you’ll select 2-3 mercenary squads to accompany you. The strategy begins before you even take to the field.

I enjoyed The Valiant’s campaign a lot and while it’s nothing ground-breaking nor especially remarkable, the use of different locations, the slow doling out of new units and variety of mission setups gives it a suitably satisfying fervour, enough to whet the appetite of any would-be Saracen slayer. It’s like Halo Wars, only it’s with infidels instead of aliens and swords instead of gravity hammers… I’m not selling that particularly well, I’ll admit.

That comparison to Halo Wars is rather apt in the sense of how The Valiant plays. Much like the recent Ancestor’s Legacy, its focus is more on the squads and units themselves and how you deploy them, rather than any grand base-building or strategising.

Heroes have their own abilities, like Theoderich’s fortitude replenishment or Faysal’s fire arrows. You’ll need to make extensive use of these, as particularly in the second half of the campaign or in online modes, they’re the absolute key to victory. In battle, heroes build up vigour and a special meter, allowing them to unleash a special AoE attack.

Regular squads and units have basic abilities like cavalry being able to charge the enemy or swordsmen knocking down their foes for brutal damage, but they’re nothing too exciting. For the most part, combat itself devolves into spamming abilities as often as possible and making sure melee units are cutting off enemy melee units before your archers or crossbowmen lay waste to them.

It’s accessible and simplistic but simultaneously it’s chaotic and can go wrong for you pretty fast if you don’t pay attention. There’s not a whole lot of actual strategy aside from making sure your archers aren’t doing fisticuffs with a squad of axemen, but the rock-paper-scissors formula has enough to keep you engrossed for a while.

The only real issue I had with The Valiant was how some scenarios and sections of the campaign become attritional bore fests as you’d be horribly outmatched, requiring you to fight off one squad at a time, retreat to a replenishment camp to rebuild, rinse and repeat until you win. It felt hugely unsatisfying to win as a result and feels like it was designed with this mind, which seems… an odd choice. Water is already in short supply in the desert it doesn’t need to drain my patience too.

Whether it be the campaign or in PvP versus another saintly commander, the bulk of your time in The Valiant will be spent micro-managing your squads. Though, that’s not to say there aren’t some macro elements you’ll need to sink your armoured boot into.

Across the maps will be resources or resource points, in this case wood or gold. Both are needed to purchase siege engines, with only trebuchets and catapults accompanied by a ram on offer. Meanwhile, new squads can be purchased from capturable replenishment points on the map.

The squad limit is generally pretty small across all the modes, so you’ll never be in command of more than a small battalion, never mind an army. If you’re looking for The Valiant to be a grand fantasy power trip of marching thousands of steel glad brutes through the sand, you’ll be disappointed.

Outside of a couple of defensive towers and palisades there’s just not really anything here to get your strategy brain engaged. I do think The Valiant has scope for a bit more depth with these mechanics and over all 3 modes it would benefit from having a more macro focus on some light base building or even other options for attacking and defending objectives.

It may be the Stronghold fan in me, but I found myself wishing I could just do a bit more than move squads around or use foliage or forestry to hide troops.

Once you’ve seen off Theodoric’s journey across the Holy land, you can partake in skirmishes with other people/AI or engage with two fellow bringers of God’s will to defend some supply trucks in jolly cooperation.

The online servers were as dead as a fully clad knight in a tar pit, so I played across a couple of maps against the AI which was alright. The core gameplay should lend itself to some interesting match ups with others and the maps themselves are simple lane-based landscapes with even smatterings of resource points for both sides.

You can play solo 1 vs 1 to settle a grudge or have team battles, which is nice. Plus, if you really want to get your competitive spirit going you can play in Ranked matches, to see just how well someone else can kick your helmet in.

I unfortunately didn’t get the opportunity to try the cooperative mode, due to no-one being available to play it yet, however the concept of the mode seems exciting if typical fare. It’s a wave based horde mode complete with upgrade trees, findable consumables and different tiers of equipment, very snazzy, for a Templar.

Virtually everything you engage with in The Valiant will be levelling something up, gaining you new cosmetic items for heroes or armies and unlocking trinkets for your profile. There’s a wealth of content on offer here, with the campaign taking 12 hours just on its own, so you certainly won’t be bored crusading across these blood-soaked fields.

The Valiant is a good RTS game, provided you’re appeased with the micro-management style of squad based action. As a fan of all things involving a medieval setting, I was hugely drawn into the clattering of swords and the explosions of Greek fire erupting to melt an opposing force.

It certainly helps that The Valiant looks fantastic. Realistic water effects make the Venician seas flow with grace, swordsman in combat animate beautifully as they carve each other apart. There’s a variety in locations from rain-swept swamps to sun-scorched desert and it all just works wonderfully at drawing you in. Just, don’t zoom in too close to character models or look too hard during in-game cutscenes, as there’s some rougher edges than a Templar’s fist.

The wealth of content and game modes, as well as a fairly compelling campaign mode complete with extra challenges and profile cosmetics to earn, means this is easy to recommend to fans of the genre. It’s straightforward enough that newcomers would probably pick it up quite quickly too, aside from the odd difficulty spike during the campaign.

The Valiant is also probably a bit too simplistic and lacking that extra layer of depth to make it a seasoned swordsman. Where its setting, graphics and overall package excel, the minute-to-minute gameplay is just missing that extra spark to make it a relic worthy of the Holy land.

The Valiant is a good squad-based RTS with a compelling campaign, superb graphics and a wealth of modes to enjoy. However, it would have benefitted from a deeper base-building mechanic and a smoother difficulty curve at times. It’s a valiant effort worthy of your time and attention, but it falls just short of justifying the Holiest of crusades.

The Valiant is available October 19th on PC via Steam, GOG and Epic Games Store, PS4/5, Xbox Series S/X and Xbox One.