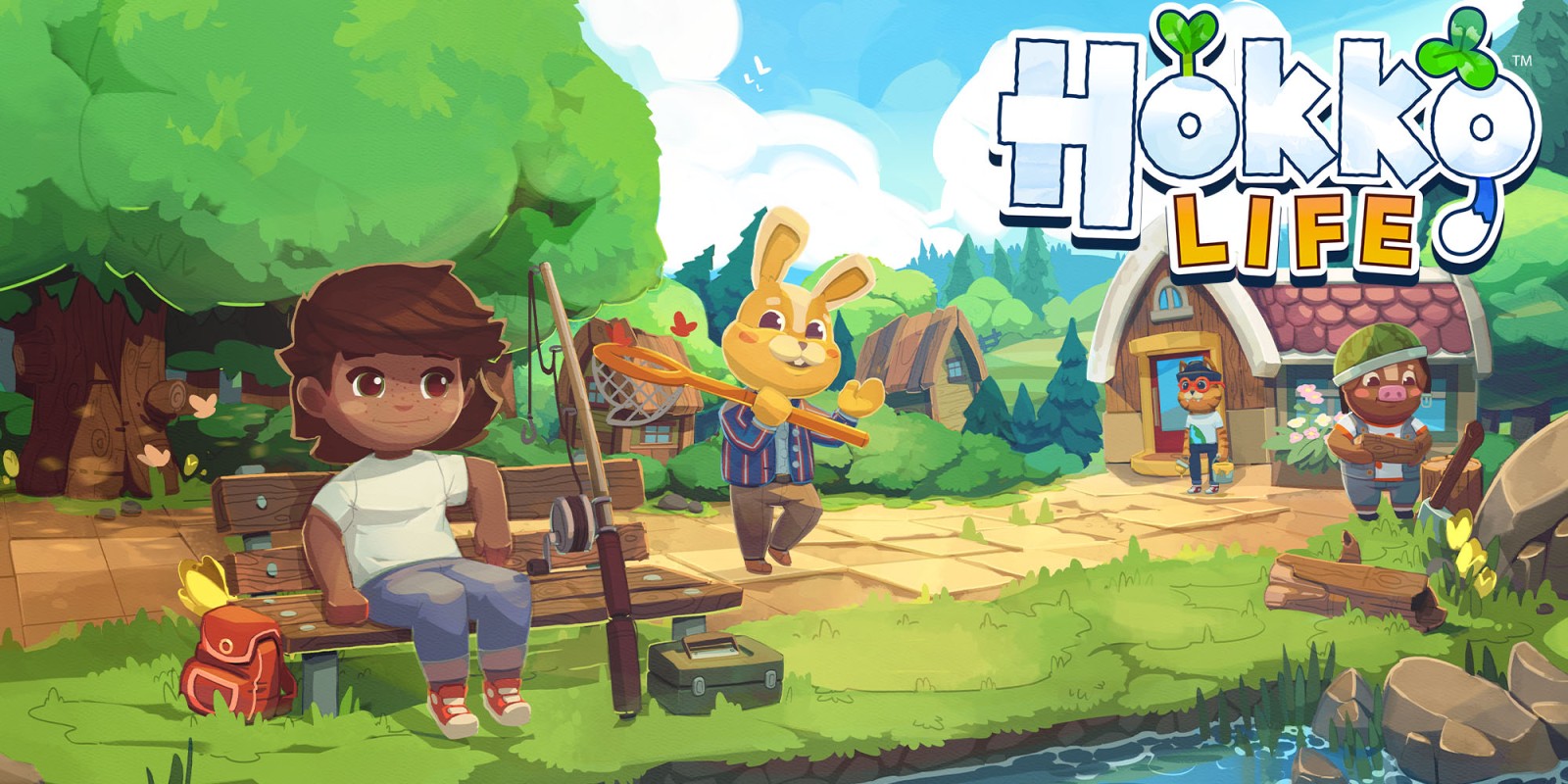 Hokko Life wastes no time getting to the point. Most farming games have some sort of elaborate ‘my grandfather died’ story that becomes almost part of the furniture with any farming simulation game. However Hokko Life dives straight into a ‘Pick your own adventure’ and allows you to use your imagination to explain why your character has ended up in a new town. It is a bold move to be the only human in the village when all your companions are different animals, but we move.

No farming game would be complete without a customisable character, and Hokko Life is no different. Your character allows for customisable features including hair, skin colour, eyes and even freckles to put your own individual mark on the protagonist. Do I kind of wish there was an option to be a colourful teddy bear like my neighbours? Sure, but this is fine too.

Important Note before diving in: I think it is only fair for me to mostly talk about the things I experienced post an update, which was about 8 hours into my gameplay. As that is the game you will be experiencing. It also should be known that another significant day one update is on the way.

Starting off slow, characters will take you under their wing to show you some of the ropes of Hokko Life. They stat by Introducing you to gathering resources, building your own furniture and getting accustomed to the different menus available for inventory, tasks, and collectibles. Collectables are largely in the form of either fish or butterflies. Depending on season or location, there will be different series’ of these to collect.

One overarching theme I noticed now over 14 hours in, is the pace. It is a slow burn before really kicking off with the fun. This could be for many reasons, and also could be a product of my game needing an update. If it is not the latter, then this would be a great starter farming simulator for anyone who has never jumped in and could feel overwhelmed by a front loaded bunch of tasks that other games can offer in the beginning of their games. It’s clear the game’s inspiration is taken from Animal Crossing with furniture building and a large focus on helping your villagers. It reminds me more of the earlier version of Animal Crossing than its newer successor, but nevertheless the inspiration is certainly there. If you have not been fortunate to dive into Animal Crossing then this might be a good alternative to visit.

Hokko Life offers all that those will be familiar with in the genre. From chopping, mining, fishing, collecting insects, and all with a click of the button. At times games can make these simple mechanics convoluted and overly complicated, but Hokko life does make this relatively simple – apart from the odd mismatching with trying to collect butterflies. Pesky winged things.

Although not the sharpest graphics, Hokko Life exudes charm and sweetness. If you’re looking for realism, this won’t be the game. If you’re looking for bright colours and sweet cartoon animal characters as your buddies then look no further. The music is especially complimentary of the tone of the game. This is a game that is clearly not meant to be rushed and one to play curled up on your couch, in the back of a car on a long journey, or on your favourite comfortable seat.

With ease exploring many areas, with many to unlock in the later game there is much to collect and sell. The main pull of the game aims for you to get enough resources to make the village a lively and bustling community by building houses and moving them in. Houses are built with coins and resources collected from the environment and crafted in the town’s local workshop.

Hitting The Nail On The Head?

The town’s local workshop allows you to craft, edit and design to your heart’s content. You can also craft items out of your current inventory such as clay into brick, as well as craft colourful paint to decorate the internal and exterior of yours and others houses. It is a bit frustrating to sometimes need to walk to the same place to do things that are just out of your backpack but it’s something that you can quickly become accustomed to.

I do have to say that building freeform from blueprints isn’t massively intuitive for the PlayStation and this could either be something that just isn’t fit for a console, or just an extremely fiddly mechanic. Nothing quite fits, and my poor table looks like someone body smashed it. It’s not exactly feng-shui. It seems overly complicated when it could be made a lot easier with snapping or guides. A blueprint after all, is supposed to be a set of instructions. Instead you are given a transparent square grid, and left to your devices creating haphazardly placed blocks of wood with floating legs attached. I thought this was something that would get easier to manoeuvre over time, but after many attempts, I would rather just buy whatever my villagers wanted, instead of being made to craft and decorate it.

However, this is something that will allow creative juices to flow. Hokko Life offers many parts that are made of different designs, and materials, as well as paint and wallpaper that can be designed exactly to your taste. So if that is something you think you’d enjoy, it does have the potential for hours of fun for the right person.

Additionally, this can then be uploaded to the equivalent of Hokko Life’s cloud and put into your own shop which other players can visit when they open the city allowing them to download your item for their own home. Hokko Life also puts on competitions with themes that can be entered into. If you’re better than me at playing Ikea designer, it can be a total nook of the game that can take up a lot of attention.

What’s In Your Bag?

Not much but thanks for asking. No really, this is one thing that I did find a consistent problem pre and post game update. I don’t understand the thought behind a game where there is a lot to craft, collect, and combine for there to be minimal space to keep it all. Luckily, what you can hold of one item is so far to be seen very high. However, the amount of times I had to drop things all over the area, to run to the supermarket and sell what I had, to run back and collect what I had dropped is probably the biggest task of the whole game.

Inventory can be unlocked through doing tasks in the game. Next to your inventory menu, there is a statistics log, full of offers in-game achievements that will unlock better upgrades, more area’s, and opens up a lot more to the game. This isn’t actually told to you, and more insinuated that it will be prizes to have. You also don’t know what you’re getting with what you’re doing. Nor, can you work out what it is you may need to do as they are tiny icons, and some of them are very similar.

So let me save you the pain of walking around for hours trying to work out how to upgrade your backpack and let me tell you, if you don’t know how to do it yet. It’s probably because you need to chop 100 tree’s for it to unlock or something similar. It is always fun to achieve a certain statistic in a task, but it would be more beneficial to have that better explained.

The more I played the game, the more enjoyment I started to get out of it. Unlocking multiple areas, farming vegetables, planting pear trees and starting to experience different seasons. Also the more villagers you have in the town the more purpose your character has. There were some times where I would sleep to pass the night in hope something triggered, but now there is always something someone wants and it is very fun to craft or find that.

If you are new to the farming sim genre, this game is probably for you. It isn’t loaded with complications, and suits a pace that isn’t for someone seasoned by the likes of Harvest Moon, or Stardew Valley unless you are wanting a much more laid back time.

Hokko Life fits the bill for a simple, yet charming experience. For seasoned players, be mindful there is a slow burn to start and may be more suited to those who are newer to the genre. Whilst some mechanics are not intuitive for console play, Hokko Life on console still captures the creativity and calmness of the farming sim genre.

Hokko Life is available now on PC via Steam and coming to Nintendo Switch, Xbox One and PlayStation (review platform) on 27th September.