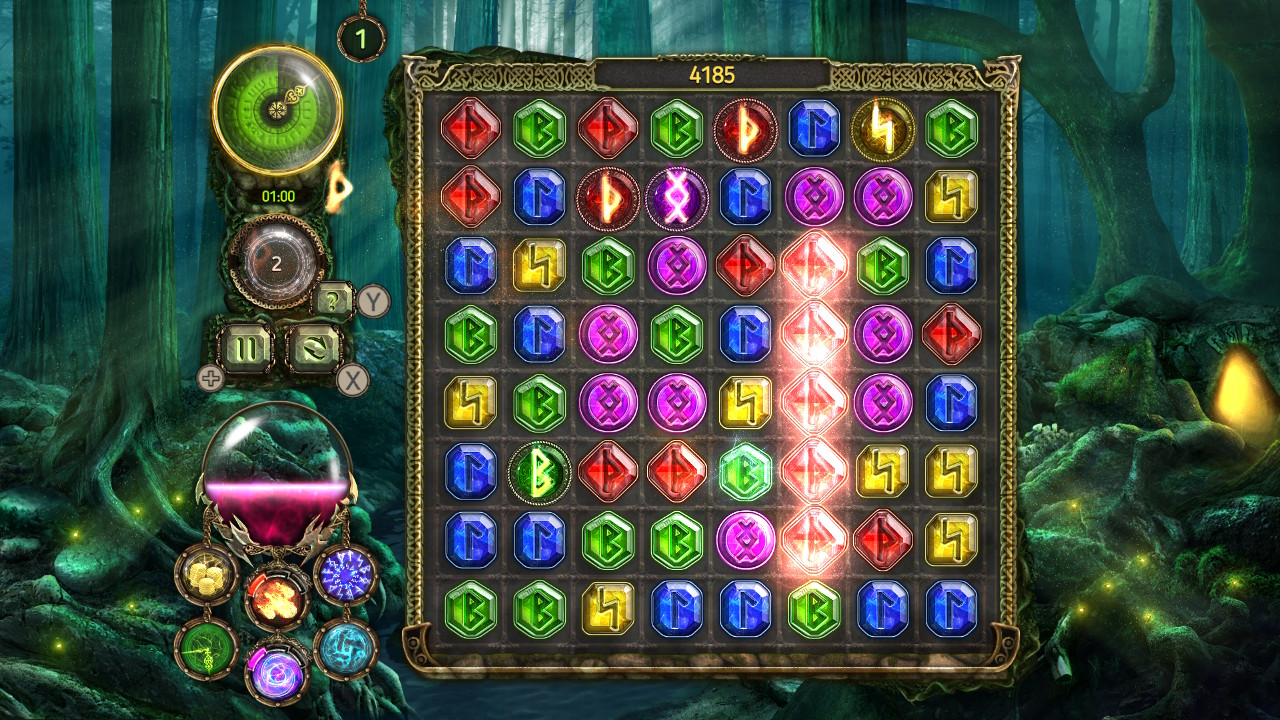 With little personality, no innovation and appearing on the clunkiest platform to play a match-3 game, Rune Lord is a hard sell. The Finger Guns Review.

When you think about genres that have always been better somewhere other than consoles, there’s a few that come to mind. Real time strategy games have always been better on PC with a mouse and keyboard. Football Managers and other sports managers have never really fared well on consoles either. Then there’s the match-3 genre, a type of game that spawned on Fujitsu’s FM-8 and FM-7 platform but was perfected on the smartphone many years later. Has there ever been a good Match-3 game on consoles? I can’t think of one. Rune Lord doesn’t break that streak.

The criterion for Rune Lord is the same as every Match-3 you might have played over the years. You’re presented with a grid filled with symbols and the idea is to line up 3 or more of the same symbols by moving a block up, down, left or right from its original position. Any symbols, or rune’s in this case, match up then disappear and anything above them fall down to fill the gaps. The aim of each of the game’s 60 level’s is to collect a set number of glowing runes by matching them with 2 or more other runes with the same symbol. It’s Candy Crush with a Nordic twist and 3 difficulty settings.

Rune Lord lacks any innovation in its moment to moment gameplay. When you link more than 3 runes together, you leave behind a symbol with a special power. Depending on what coloured rune you linked depends on what power this special symbol has. Some explode, others shoot electricity around the grid destroying random blocks and some add to your high score or time limit. There’s power up’s too. Collect enough rune’s to fill a glass orb to the side of the grid and a special ability will occur. This can be a meteor strike that destroys a number of blocks right through to transforming a number of blocks into the same colour. There’s combos which really rack up those high scores too. Like I said, it’s basically Candy Crush with a Nordic twist.

As you progress through Rune Lord, new environment’s become available which introduce more tired Match-3 tropes. Vines which lock your runes in place until they’re combined in a match with other runes, volcanic rocks which can’t be matched with anything and make a nuisance of themselves and an ice golem which stops onto the screen and freezes a few runes in place are all issues you’ll have to navigate.

Occasionally, you’ll have an optional objective to take a stab at. Sometimes there’s a frog that sits just off the second from bottom row of symbols will reach its tongue across the grid and suck up any flies that you drop onto his row. Feed it enough flies and it’ll grant you a coin. Some levels task you to match up runes from a colour consecutively in order to raise a chain which will also grant you a coin.

The first and only way Rune Lord differentiates itself from the glut of other Match-3 games is with these coins. Granted to you after each level and by completing each optional objective, these coins can be spent to upgrade the effectiveness of your power up’s and special rune abilities. As you do so, the visual appearance of your character – only visible in this menu –  grows more impressive too.

There’s an element of Rune Lord on PS4 that I’m not entirely sure is a feature or a bug. I hope it’s the latter because if it’s the former, it’s simply irritating design. For the vast majority of level’s there are 3 separate goals to hit, each a higher amount of glowing runes to collect. The issue here is that even if you smash the top score requirement, you’ll have to play the same level 2 more times in order to hit the other lower scores. If you’re tasked with getting 30 runes and you get 50, you’ll still have to play the level again twice. I’ve no idea if this is a glitch or intentional to make the game two thirds longer than it ever needed to be.

Rune Lord is backed by a soundtrack that would be right at home during a night of Dungeons or Dragons or Medieval LARP’ing. The art work, what’s not covered up by menu’s, is a perfectly passable background to the grid-bound action.

Which brings us to the elephant in the room. Of all the platforms you could play a Match-3 game on, PC with a mouse, mobile or tablet with touch screen or a console with a controller, playing on a PS4 with a Dualshock 4 controller is likely the worst. Navigating around the grid requires button presses rather than the touch of a finger on a phone or flick of a wrist with a mouse and Rune Lord feels clunky compared to every other Match-3 game I’ve ever played because of it.

If you’re desperate to play a Match-3 game and the only system you could possibly play it on is a PS4 then Rune Lord will give you what you want. There’s some easy trophies to earn here too. Unfortunately, if you’ve got a mobile phone or PC with an internet connection at hand then you already have access to a plethora of more innovative, more original and simply better Match-3 games that are free to play and will only cost you the amount of time to dismiss an occasional advert. When there are better alternatives with no monetary price, Rune Lord becomes a very hard game to sell or recommend.