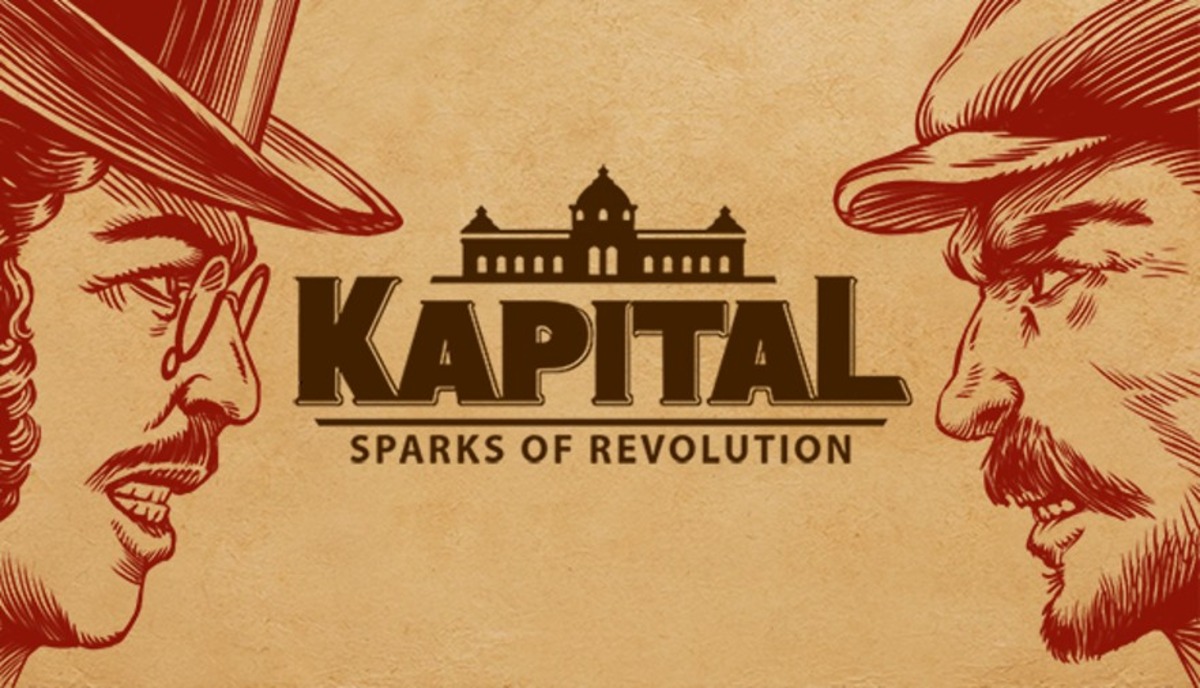 Bringing back a city on the brink of destruction is tough, but is Kapital: Sparks of Revolution too autocratic? The Finger Guns Review:

Welcome, newly appointed Mayor! Kapital: Sparks of Revolution is a sandbox economic simulation title which mixes city building with intricate management systems. It sounds complicated, and you wouldn’t be wrong in assuming so.

Your role is to take control of this unnamed European town, raising it from a discarded and destroyed mess to a fledging society bustling with happy people. The catch – because of course there always is one – is that resources are limited, the classes of people are at each other’s throats and time is of the essence.

Mayor Adam West just won’t do in this case, you’ll need to up your game, manage allegiances and make tough choices. Does this city building sim thrive from prosperity or fall under the iron thumb of oppression?

A City From The Ashes

Kapital offers a primary campaign with a laundry list of objectives to follow to rebuild your war-ravaged palace and surrounding town. It’s fairly chunky, as it doles out task after task that shows you the ropes through all of the systems, buildings and intricacies that come with keeping a nation of people satisfied with your leadership.

The city simulation elements are extensive. You’ll be required to build housing, production facilities (wood, food, alcohol, bricks etc), entertainment, food, administration, you name it, you’ll need to develop and build it. It’s like building a theme park, but where the customers Molotov the rides if they’re unhappy.

Following the campaign requires you to be moving at a serious pace to keep up. As each day passes, more migrants will flow into your expanding city, requiring more food, housing and essentials like medical care or even security through Policing, whether you’re ready for them or not.

In fact, the pace is so rapid, this is where you’ll likely come up against Kapital’s first major issue. The introduction outright tells you you can’t satisfy everyone and failure is likely, but damn, Mayor Quimby had it rosy in comparison to this. 2 hours into my first campaign I was out of every possible resource, my factories were broken (meaning I couldn’t make any more) and the locals were petrol bombing my palace.

Who said governing was easy, right?

Part of the reason you’ll inevitably meet your unceremonious end in Kapital is that you have to keep all three classes on an even keel. The Nobles want pretentious means to look fabulous, the Bourgeois need to fill their coffers and the workers just want somewhere to drink and scrap in their down time.

Problem is, you can’t build everything that satisfies everyone. As resources are so limited, you’ll have to pick and choose what to prioritise. Each class requires certain buildings, with the Nobles requiring a Pharmacy over visiting a peasant hospital for example. Moreover, if there’s a Police investigation going on, you can prioritise certain cases to help particular classes over one another.

Random events routinely trigger where you’ll have to make difficult choices to side with one class or the other, which affects their loyalty. You need every class onside to succeed, but you may need workers to keep your factories going more than you need the Bourgeois to line your already overflowing bank account.

The system itself is a great idea and the moral quandaries it puts you in are interesting (arresting a worker just to keep the Nobles onside never feels good, but it must be done). However, there’s a point in every campaign where you simply lose one of the factions and they revolt, and from there things always went to hell for me.

Mixed with the issues of lack of resources to adequately get past the 2nd to 3rd act portion of the campaign, it becomes more oppressive than your not-so-friendly authoritarian country neighbour. It felt frustrating to put so much time into building a city only for it to fall apart with nothing that could be done to salvage it before it’s too late.

As you progress and build up your fledging town (before its inhabitants burn it all down), you’ll be upgrading buildings, researching new technologies, solving crises and curing diseases. The research and upgrade paths are extensive, allowing you to become a true metropolis if you can make it that far.

Before you can do that however, you’ll need to pass legislation. Bureaucracy be praised! Who doesn’t love filling out forms to do fun stuff? Anyhow, you’ll need to pass Acts and sign laws to be able to build new infrastructure or recruit secret service officers to kidnap your opponents (you’ll do it too, don’t lie). Again, the systems are multi-layered which deepens some of the progression to keep things moving along.

Once again however, you’ll notice all of this is slightly bottlenecked. Research and signing laws are on cooldown after each one you complete, preventing you expanding as quickly as you need to at the beginning, which can completely scupper your chances of survival later on, which sucks.

Moreover, the story that holds the campaign together becomes tiresome a bit too rapidly. There’s a representative for each class who’ll endlessly bicker about each other while giving you tasks, but it’s all quite menial. A couple of lines of written dialogue are amusing, but most of it is just filler. I skipped most of it on my second attempt and it really doesn’t add too much to the campaign itself, which is a missed opportunity in my book.

Days are split over three periods – work shift, free time and rest. Managing your resources and tinkering with buildings, knowing when to pause production or put on a double shift (your workers won’t be happy but who cares) may make or break your success.

Inevitably, every attempt I made ended with riots erupting, protests galore and a failed attempt by my Police to subdue the ruckus leading to my palace being burnt to a crisp. I enjoyed the city building elements and setting up a thriving town for the first hour or two each time, but it always came crashing down with disappointment and a sense that the game is just purposely unforgiving for the sake of it.

The UI and map are clean, with a certain old school style to them that looks great. Once you have a high enough population, it’ll also feel bustling with activity which is awesome to behold thanks to the fruits of your exploitation of the populous. Unfortunately, the game has one map, a handful of ambient music and nothing changes between attempts, which leads to it becoming stale after your first playthrough.

While the systems, mechanics and ideas made sense to me and I understood what I was meant to do, it just felt too overbearing which dampened my enthusiasm to keep trying. Coupled with the repetitive map and gameplay loop, I sadly lost interest in Kapital sooner than I’d have liked.

So This Is How Autocracy Falls…

Kapital: Sparks of Revolution has the core infrastructure of a really good city management game. The development options are numerous, the systems deep and challenging. With regret though, it’s also unapologetically corrupt in how it’ll punish your goodwill.

Much like my train station authorities skimming money and grain off of my supplies, Kapital slowly degraded my reserve of enthusiasm to keep playing. I tried the campaign and its sandbox mode, finding both to be equally devilish in its treatment of my poor towns.

These people ask a lot to be satisfied, so the question really becomes whether your well-intentioned efforts are worth the repeat attempts to try and make this city succeed. If you can master the art of subterfuge and Mayoral duty, there’s probably something worth governing in here for you.

Unlike the French Revolution, you’re most probably going to fail at subduing this rebellious town a number of times. Deep and challenging gameplay systems are unfortunately undermined by an authoritarian difficulty curve, lack of variety in presentation and a bland story. For would-be dictators however, there’s a city worth pulling up kicking and screaming from the dirt.

Kapital: Sparks of Revolution is available now on PC via Steam (review platform).

First Screenshots of Vengeance Is Mine - The Next Game From 110 Industries
The Finger Guns Podcast Ep. 120 - Can You Copyright A Genre?
Robo Wars Review (Switch) - Robo Bores