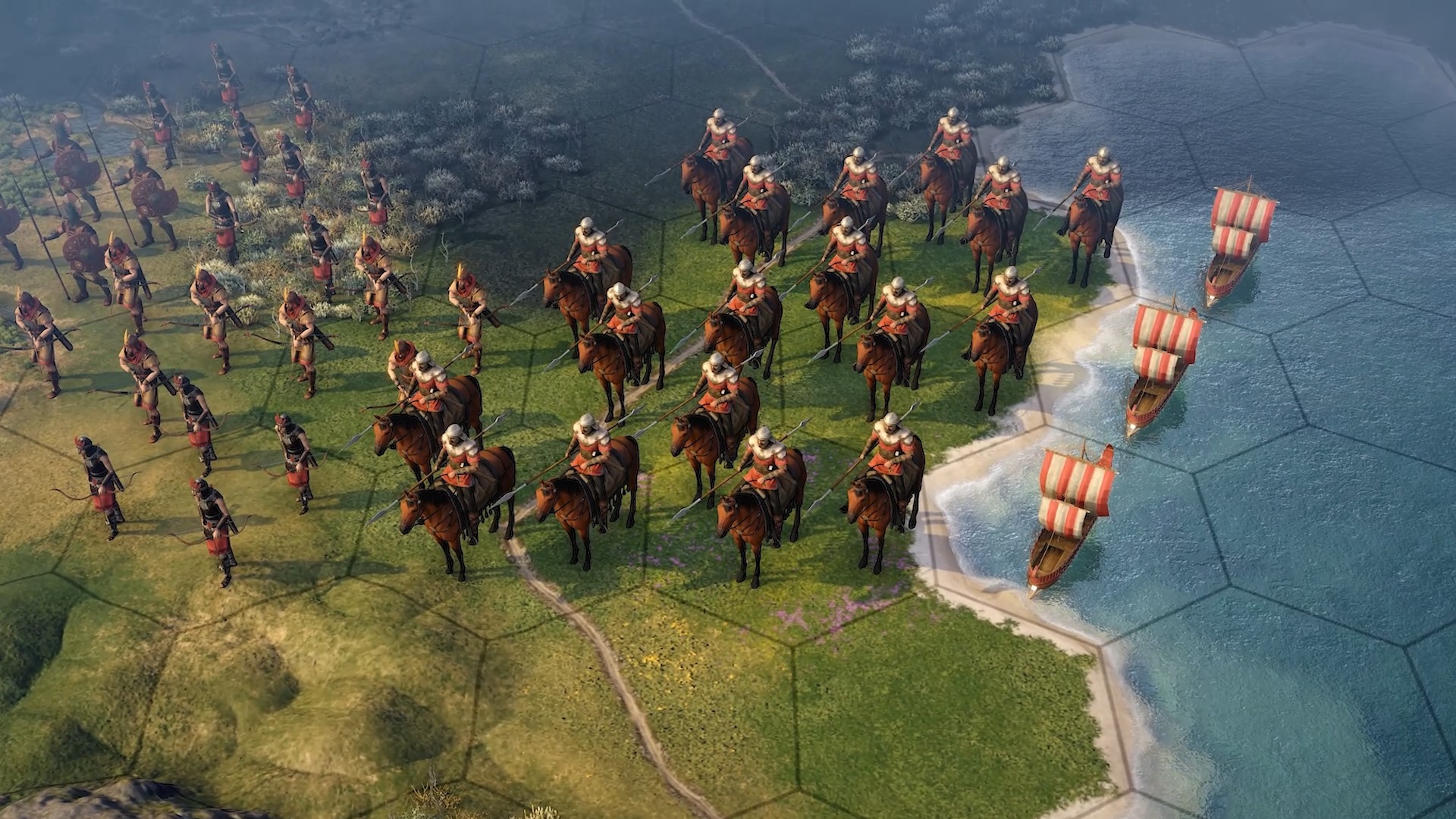 Old World: Heroes of the Aegean expands upon the latter nation, as well as bringing a newcomer to the mix; the Hittites.

Taking a deeper dive into ancient history than its rivals, the core game in Old World is an excellent mix of Civilisation and Crusader Kings. Instead of being spread over the many epochs of human history, it focuses solely on the classical period of history, with many recognisable nations such as Egypt, Rome, and Greece showing their faces. Old World: Heroes of the Aegean expands upon the latter nation, as well as bringing a newcomer to the mix; the Hittites.

The Hittites are an interesting addition for Heroes of the Aegean – a new faction that can be played in any single player game, they have several unique bonuses that centre around utilising terrain to their advantage. Hill combat is easier for their units overall, and the ability to clear vegetation with any of their units instead of just with workers means they can tame the landscape with ease. They also gain additional civics per turn which can be used to, amongst other things, pass laws and build wonders. This gives them the ability to build a strong economy early on to springboard your game off of, and then transition into a burgeoning realm later into the game. Their unique units, heavy and three man chariots, emphasise mobility compared to many of the other nations unique units of the game, and are excellent at chasing down support units such as archers due to their speed as well as their ability to ignore zones of control. Used well, these can turn the tide of many engagements and are a great addition to the game.

The final addition for Heroes of the Aegean is a new group of scenarios tied to the rise of Greece, then Macedon, and charts the beginnings of the rivalry between Greece and Persia, all the way to the eventual conquest of Persia and the splintering of Alexanders empire amongst the Diadochi in the wake of his death. Many heroic characters from this time, from Alexander himself to Leonidas, show up during the course of these various campaign missions. The missions themselves showcase a variety of gameplay, from an RPG’esque campaign to enforce your influence over the various cities of Greece and Macedonia, to a last stand against valiant odds with no need to focus on cities or economy, and instead just focus on conduct of large pitched battles.

The scenarios offer a different experience to savour, but unfortunately they do have large issues with balancing and some bugs – my game crashed twice over the course of playing the missions, whereas I’ve never had the game crash elsewhere. In addition, the balancing in particular is wonky and not recommended for newcomers – enemies spawn in elite troops, events that devastate your game need to be prepared for in advance, and the time limit of the scenarios put the player in what is often a frustrating position against overwhelming odds. It often feels like you need to know what happens in the scenario before it actually takes place to have a chance, and this takes away player agency and becomes more of a game about remembering specific events, rather than adjusting your strategy accordingly as events happen.

An example of this is in the third scenario, where you take control of Phillip of Macedon and are tasked with expanding into Thrace, Illyria and finally Athens. You start with a small military force and need to expand quickly, as you’re on a timer until Phillip passes away (around 80 turns). The initial start is generally fine, but by the time you feel you’re ready to expand south to deal with Athens, chances are you’re in trouble; Athens starts with far richer cities, a better economy, and a large bunch of veteran troops – they always seem to have more, and better quality, troops than you have. The difficulty in this particular scenario, even when set to the easiest possible, is incredibly frustrating and had me put the down the game a few times. This isn’t the only example but is the most egregious.

Finally, at £8.99, the content is also a bit more expensive than I’d like. The new faction is great, but if you don’t have any interest in the scenarios, then it’s the only content that is actually new. £8.99 is pretty steep for 1 new faction, but still something to consider if you are desperate for new content in the game, as I feel they are well implemented and build well off of the base game factions to offer something new.

Overall then, Old World: Heroes of the Aegean adds some promising content to the game, but the content will not be for everyone and is maybe a bit more expensive than ideal for a lot of people who may not be interested in the scenarios.

The Hittites are an excellent addition which add extra hours of playtime and additional playstyles to be enjoyed, and are the highlight of the DLC. Unlike Alexander’s attempts to conquer Psersia, however, the scenarios are a bit of a miss. An experienced player who knows the game very well may well be able to emulate Alexander himself, but for a new player they very well may end up on the wrong side of history.