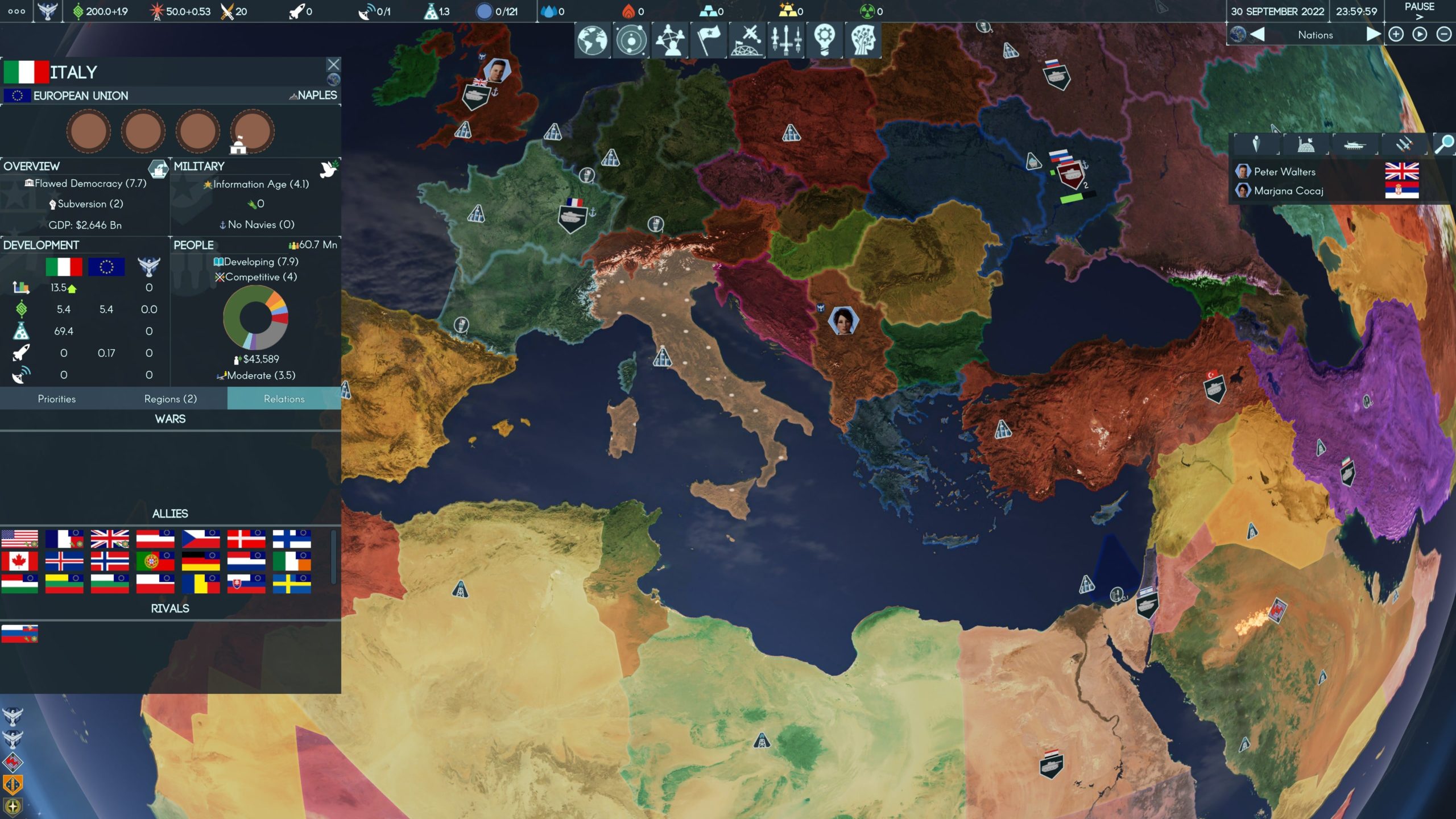 A vast and complex grand strategy game, Terra Invicta isn't without its flaws but it's a thoroughly engrossing title regardless. An Early Access Preview.

Pavonis Interactive have had quite an interesting journey. Initially responsible for the well known and well received mods ‘Long War’ and ‘Long War 2’ for XCOM: Enemy Unknown and XCOM 2 respectively, they’ve since spun off their mod making skills into making an entire game of their own. They’ve had ambitions to create a game from the ground up, and with the release of Terra Invicta [Steam Link] into Early Access imminent its time to see how it stacks up compared to the competition.

Terra Invicta has a premise similar to XCOM; an alien invasion of earth has started to take place, and humanity needs to respond appropriately. The player directs the technological, financial, and military response to a new major threat to humanity. Comparisons mostly end here, however, as Terra Invicta and XCOM offer very different experiences. In XCOM, you command the resistance and fight back against the aliens. In Terra Invicta, you can emulate this, but you can also appease the aliens, or fight for them, or try and flee the solar system altogether to escape their wrath. Earth, the cradle of humanity, features as the main part of your game but one of the biggest draws to Terra Invicta is that large parts of the solar system are simulated – Earth is but one battleground of many. Later into the campaign, you can even establish colonies on other planets. Whether you want to fight for or against the alien threat though, the gameplay (at least to begin with) is the same for each faction.

All factions will start with 2 agents, and more can be recruited later on – these are the spear you will use to enforce your factions will. To begin with, you will vie with the other factions agents to bring countries under your influence – the biggest and more developed the country, the harder they are to establish operations in. Once you have a foothold, you will gain resources you can use to improve nations, research tech, and build fleets. Using your agents, you could then focus on improving the economy of your countries (which has a dizzying array of options), or countering enemy operations by detaining their agents and turning them to your side for intelligence, or instead you could just turn to outright assassinations. Alien operations are harder to deal with, but as you progress your agents will improve and gain the capability to deal with these too.

Whereas XCOM has turn based tactical battles featuring individual operators in ground battles, Terra Invicta instead focuses on a grander scale – real time space battles, potentially with a couple of dozen ship present. These are more similar to some of the action scenes in The Expanse than in other media – ships have to keep track of fuel and ammunition, which are very easy to run out of. They need to be designed well and trade offs are very much a thing – more armour will protect ships in combat, but they’ll cause issues with fuel consumption, more weapons will help in combat but there will be less support equipment available for establishing new bases or scientific exploration. Managing your fleets in combat will require you to fight on a 3D plane, which offers additional tactical options; outmanoeuvring your opponent and using the openness of space to your advantage will be key. Your opponents will not only just be the aliens, but other human factions as well. Ground battles are in the game, but are automatically fought between hostile armies and the player has very little agency over these; improving your military tech helps but you won’t be commanding tactical battles like in XCOM.

A Dizzying array of choices

The sheer amount of options a player has in TI is astounding. You can focus on tech and try and get ahead in the space explorations game early on, to try and secure the best mining sites in the system for resources. You could focus on expanding the land you own by force, bringing more of Earth under your control but leaving you weak elsewhere. Alternatively you could focus on using your agents to steal tech from other factions, or sabotage their operations. This wealth of options is one of the big strengths of the game.

The visuals of the game work well, and fleet battles especially are fun to watch; with missiles or lasers shooting into the vastness of space, bringing colour to darkness. The overall UI looks fine, but it does have a couple of problem which I’ll expand upon below. The sound design is also fine, but doesn’t have the same gravitas as, say, Stellaris or XCOM do.

A special mention also needs to be said for the tech tree – it’s huge. Huge is an understatement. It’s mental how many tech options there are; it is easily the biggest tech tree I’ve ever seen in a video game. The options vary from researching alien tech, to improving your economy, to improving your ships with new components, to just getting claims to expand the size of the nations you control ingame. It’s incredibly impressive that the developers have added such a vast array of options and content to work with.

Rough Around The Edges

There are a couple of problems, however. Chance is very relevant in the game; taking control of countries, recruiting agents with good skills, success of many operations, and random events – all come down to dice rolls. If you’re unlucky, this can prove to be a very frustrating experience. Unlike in XCOM, where you could massage the dice in your favour by using cover, or equipment like smoke grenades, there aren’t many options to try and sway the dice to favour you. There are techs which help certain operations, but they’re incredibly expensive and only able to be accessed a lot later into the game. It also feels like the AI doesn’t run into the same problems you do – they are able to take everything but the very biggest nations very easily early on in the campaign, whereas you’re often (unless you rolled lucky on certain attributes for your agents) scrabbling to try and make low percentage rolls just to try and keep up. Relying on luck to try and find good agents to counteract this is also unreliable and even finding the right organisations (which are a way to improve your own agents) is down to luck on depending what organisations show up in the store, which may not improve the stats you need.

In addition, the UI needs work in order for people to be able to get to grips with the game. There are so many things to keep track of it can be overwhelming, and the icons don’t show what they are if you hover over them in a lot of cases. There is a basic tutorial in the game, but its not the best I’ve seen and doesn’t give a good explanation of why you should be doing things. Countries have dozens of stats; unrest, military tech, research points, investment points, democracy level, etc – this will be very overwhelming for a lot of people to begin with and learning how they interact with each other is often a game of trial and error.

Finally, the length of the game will polarise people. For those with the time and willingness to dedicate themselves into learning the complexity of the game, there will be a huge amount of content to explore with the biggest tech tree and the most options for gameplay I’ve frankly ever seen in a strategy game, but it could be argued it can take an excessive amount of time to get into the midgame and have many of the options open to you. It doesn’t feel at times like you’re making much progress – it can take a dozen hours before you even see your first fleet combat, and instead you’re just directing agents around the entire time, which can end up a bit boring after doing it for hours on end.

So, Terra Invicta has its foibles, but I counteract with this; sure, it is a bit rough around the edges in some areas, but I don’t think I’ll be stopping anytime soon. For an early access title, there is a ridiculous amount of content already present and I for one am extremely excited to see how it develops moving forward. Now if you don’t mind me, there are some techs I need to choose, some nations need my attention, and I have some fleets awaiting my command…

Terra Invicta is launching onto PC Early Access via Steam on September 26th, 2022.

#DRIVE Speeding On To Switch On Feb 16th
'Undead Darlings: No cure for Love' Shuffles Onto Switch & PS4
KINGDOM of the DEAD Review (PC) - Dead Nukem