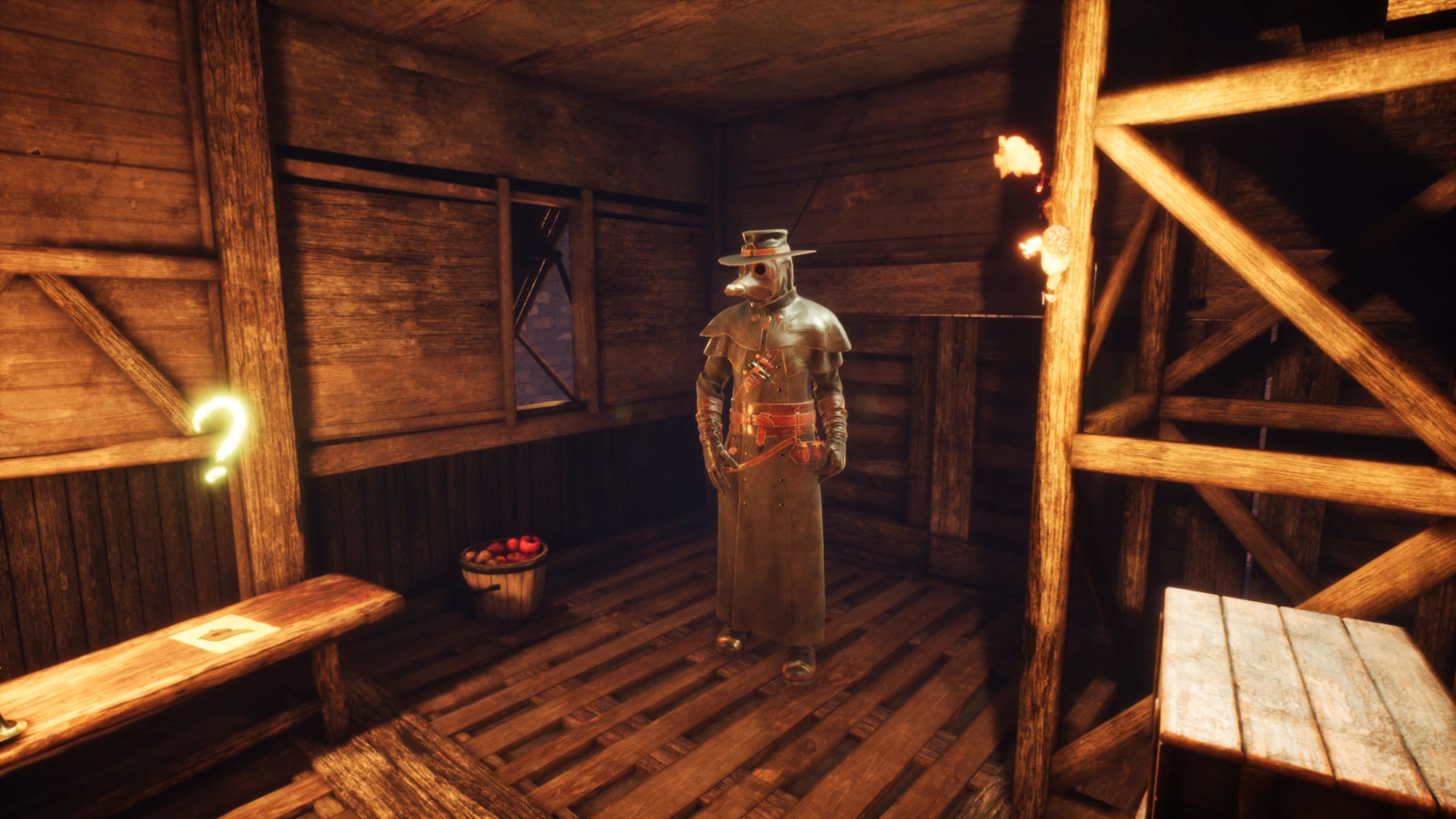 A digital diorama that you're free to explore, Black Death: A Tragic Dirge is a lifeless game that doesn't make best use of its theme. The Finger Guns review:

A digital diorama that you’re free to explore, Black Death: A Tragic Dirge is a lifeless game that doesn’t make best use of its theme. The Finger Guns review:

When you think of “The Black Death”, the bubonic plague that claimed tens of millions of lives in the 14th century, it’s likely to conjure certain imagery. Plague doctors. People dragging carts, shouting “Bring out your dead” down cobblestoned streets. Piles of pox ridden corpses piled high on a pyre. Mass graves. It’s a pretty grim time in European history that’s rarely touched upon in video gaming. In steps Playstige Interactive with their new game ‘Black Death: A Tragic Dirge’, a game set in a ravaged village during The Black Death.

Much like Playstige Interactive’s previous game NeonLore, Black Death is like a digital diorama. In essence, it’s a 3D environment to wander around via a first person view. There’s no explicit direction or objectives. Instead, it’s a game about exploration, taking in the scene while you listen to a reasonably long monologue that goes on and on about the town you’re in and what happened there.

The town you find yourself in, referred to as Clayton by “Narrator”, looks the part at least. Complete with barn, wooden buildings, blazing torches, medieval decorations and a number of appropriately dressed yet totally lifeless NPC’s, the town you’re exploring in Black Death could have easily been lifted out of an Elder Scrolls game. Within the invisible wall that keeps you penned into the town, you’re free to roam around and enter any building you see fit.

Dotted around the town are a number of collectables in the shape of pieces of parchment with a drawing on them. These act as the only interactive element in Black Death. Signposted by large flashing question marks that appear in the air near the papers, you can approach and pick up these collectables to see what is drawn on them. You’ll find that they’re all random objects from the time period, like a sword and a plague doctor. The only real purpose of these existing is to unlock their corresponding trophy; each collectable will pop a trophy, resulting in a very easy to unlock list for the Platinum. There’s very little doubt that Black Death: A Tragic Dirge is trophy bait because of this – but compared to many of the “Press X For Trophies” titles, this at least has a 3D environment to explore.

While you’re exploring that 3D environment, the Narrator to the game will spout out the story of Clayton. He’ll go on and on about how a mysterious disease ravaged the town, sent its inhabitants mad and a whole host of grim events that happened during the Black Death. The delivery of this monologue is competent if uninspiring. The hushed, deep tones that it’s delivered in don’t really do the script justice. It sounds more like an ASMR podcast than the description of the horrific events during the plague.

An Epidemic of Mild Proportions

It’s a shame that virtually no evidence of the events the narrator speaks of can be found in the town of Clayton. There’s very little of the imagery you expect as part of a game set during the Black Death. No cart full of bodies. No plague crosses on the doorways. There’s no swollen, pock-ridden victims. The only real hint that this game has anything to do with the Black Plague is a plague doctor that resides in one of the buildings. I suppose you could argue that the fact that the village is virtually lifeless represents what it might have been life after the bubonic plague had ravaged a village. It doesn’t feel like that though. It feels like a partially completed village from a game like Skyrim that doesn’t make good use of the Black Death theme.

There’s a number of other annoyances with Black Death: A Tragic Dirge too. The movement speed is glacial with no option to run. I guess that’s to ensure the game lasts a full 10 minutes rather than the 5 it might have taken if you could speed up your movement. Even so, the movement feels simply too slow, like your strolling around a supposed plague ridden village. It’s possible to get stuck in the environment too. This happened to me twice when I attempted to do a little parkour exploration rather than walking slowly. Because there’s no jump button, this forced me to quit to the main menu.

To summarise, there’s not a lot to Black Death: A Tragic Dirge and what is here falls between poor or simply adequate. Trophy hunters will be happy with an easy to unlock Platinum but anyone else will find a visually pleasing but thematically bland and uninspired virtual diorama to explore that lacks direction or purpose.

Black Death: A Tragic Dirge is available now on PS4.

Isonzo Review (PS5) - It's All Gone Quiet On The Italian Front
S.W.A.N.: Chernobyl Unexplored Review (PC) - A Dying Swan
What Lies In The Multiverse Review (Xbox One) - Another Big Banger