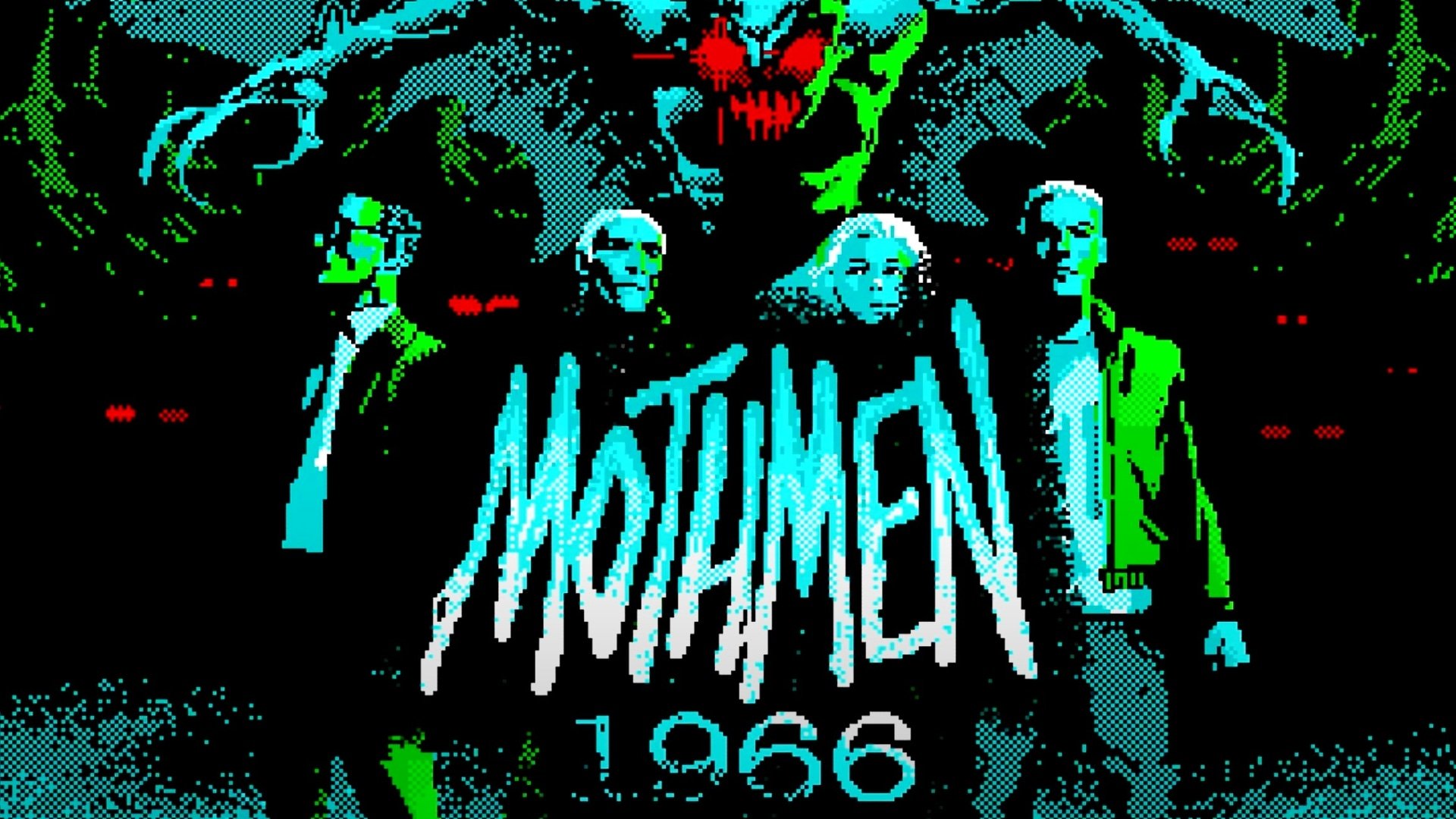 Back in 2021, I pronounced that “2022 was going to be an excellent year for interactive fiction”. I came to that conclusion based on the sheer quality of visual novels and story driven games I played at EGX last year, one of which was Mothmen 1966. The first of a proposed series of “Pixel Pulp” games, essentially a modern and interactive take on Pulp comic books, Mothmen 1966 is an interesting title. While there are many narrative driven games out there that attempt to pull off a similar thing, very few manage to achieve the quality that developers LCB Game Studio have managed here.

Mothmen 1966 revolves around the events of one particular night in – surprisingly – 1966. It follows the path of 4 characters, 3 of which you control in alternating chapters. While the game tracks the events of each character, there’s no traditional protagonist. Instead, it’s the telling of events with ‘Choose Your Own Adventure’ style gameplay.

A young couple, Lee and Victoria, are driving out into the woods. There’s some tension between them, that much is obvious but the reason isn’t immediately apparent. Lee has planned a surprise for his love but Victoria has a surprise of her own. Deep in the wood is Holt. He’s a gas station attendant with a weird family history. Lastly, there’s the non-playable paranormal investigator Lou. A bit of a know-it-all that lacks social skills, Lou is the exposition machine, filling in the gaps for the rest of the characters. Before long, the quartet of characters are embroiled with deadly flying creatures and shady Men In Black.

I won’t spoil the rest of the plot but what I will say is that this is a confidently written and assured story from writer novelist Nico Saraintaris. As each chapter is played out in a first person manner, switching between characters that tell their own story, you get to see these events from a few different perspectives. The writing manages to portray uniqueness and a depth of personality for each character that’s quite believable. For example, many of the conversations between Lee and Victoria, and the inner monologues they inspire, feel lived-in and real. Despite their being no voice acting, you could easily imagine these sentences being said.

In tone, Mothmen 1966 feels like an episode of Tales from the Crypt. It’s creepy and occasionally gory but it doesn’t take itself too seriously. It moves quickly, not dwelling on one weird occurrence before raising another for the player to consider. Just about getting your head around shady government agents? Here’s a bat and a pack of hyena to wrong foot you.

Of course, the novel is only part of a ‘visual novel’. The art is the other aspect which is the most unique element of Mothmen 1966. Artist Martinez Ruppel uses a limited colour pallet that’s inspired by the ZX Spectrum, focused on just black & white, blues, greens and the occasional splash of red to create stunning art work here. The tone here, akin to a comic book, gives life to the script which competent each other incredibly well. There’s an wonderful attention to detail in the pixel work that belays the artistic vision of each scene.

The retro inspiration can be found in the music and sound effects too. The audio would feel right at home on the likes of an Atari 2600, working around the restrictions that these systems imposed in creative ways. Those lo-fi sounds couldn’t have the depth and timber to sound realistic, so they do their own cool thing. That’s what you’ll find here. Sure, not everything comes off – there’s a dog bark sound effect that becomes irritating as it’s repeated often – but for the most part, the audio for Mothmen 1966 is great.

Mechanically, this title is a little more involved that your usual visual novel. There are sections of pure story delivery where you’ll be clicking (or letting roll) through scenes of text and complementary imagery. These are broken up by the occasional narrative puzzle however. For example, when you’re set upon by the aforementioned hyenas, you’ve got to work out a strategy on how to survive the encounter by choosing which beast to chase off in a series of rounds. These puzzles require a little trial and error (with an error usually triggering a death scene) but they’re all reasonably simple to overcome. There’s even a version of Solitaire to play.

My one and only issue with Mothmen 1966 stems from these puzzles. For the most part, these puzzles are played from a top down perspective. The art work in these scenes doesn’t always relay enough information in regards to the options you have available to you. In some scenes, options available will be along the lines of “Attack X on your left” but it’s not immediately apparent where ‘left’ is because of the nature of the art work.

The structure of these puzzles can be a little clunky too, asking the player to click on a few options just to undertake a single action. This is most prominent in a picture puzzle when you’ve got to rotate 9 tiles, arranged in a square, to form a pattern. To turn any tile, you first have to choose which row, then which of the 3 tiles you want to rotate, then the direction you wish to turn it. It’s quite long winded for what in essence is a traditional gaming trope that’s usually much more accessible.

Those few niggles aside, Mothmen 1966 feels like the start of something quite special with the Pixel Pulps series. There’s definitely a space in this genre for bite sized, quirky, pulpy visual novels that can be completed in an evening, and this game confidently fills it. I had no idea I wanted a “Monster of the week” visual novel series. Now, I can’t wait to see what comes next with follow-ups Varney Lake and Bahnsen Knights.

With assured writing and gorgeous pixel art visuals, Mothmen 1966 is a compelling start to the Pixel Pulp series. A few clunky puzzle elements are the only blemish on a fast paced and engrossing story that helps pass two hours in the blink of an eye.