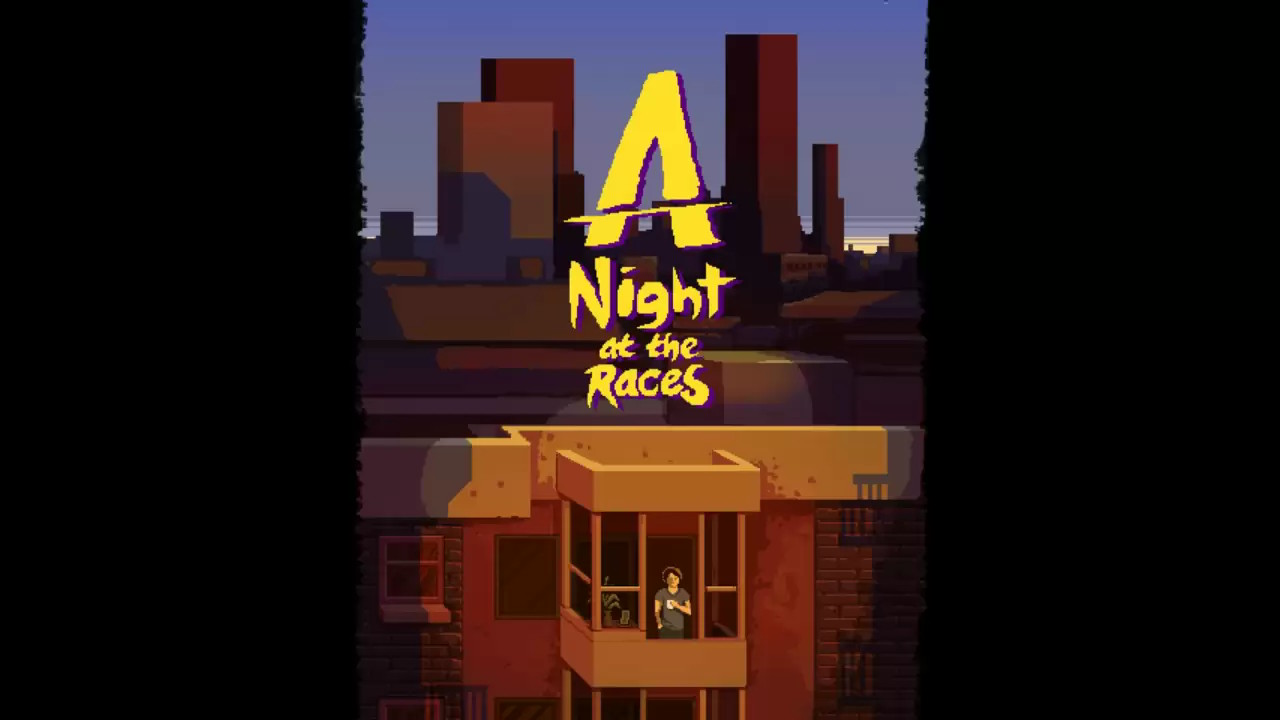 A game that divorces its central mechanics from its story in an interesting experiment, A Night At The Races is an interesting curio. The Finger Guns Review.

Video game names can occasionally be misleading. When I first read the title of “A Night At The Races”, a game from Mushy Jukebox and Nakana.io, I imagined a racing game. Maybe even a little bit of gambling. The phrase, at least in the UK, often means going to a racetrack. I think it’s fair to say that this game subverted all of those expectations in some surprising ways.

A Night At The Races is an arcade game crossed with an auto runner at heart. Before we get to the game play though, we have to discuss the framing. In the game you play as a gamer that has signed up for a competition. The competition is set to run through the night as everyone involved races to be the first person to complete a game called ‘No Berry Left Behind’. This is a modded version of the game that will automatically record your completion time back to the organisers. The first person to reach the end of the game will receive a life changing sum of money. This is where the title comes from. It’s like video game Inception. A game about playing a video game.

Outside of the arcade gaming, you control your view point like a first-person point and click adventure. From your original starting location (which evolves over time) you can select to look at your phone that’s overlooking the street below, to access your PC along with the message board for the race, or to access the games console so you can make progress on the game.

That video game – ‘No Berry Left Behind’ – is a fun twist on an autorunner. In most of the games in this genre, the aim is to cross obstacles as you run along a horizontal path. In this game, the aim is to reach the exit cube (or collection of exit cubes) that you’ll find at the very tippy-top of a vertical level while collecting every berry along the way. To reach that location, you’ll have to use the abilities of your berry protagonist. The instant you start a level, the hero berry character starts to move. They won’t stop again until they reach the exit point. You can change their direction on the fly but you can’t halt their progress. They’ll glide ever forward.

While the berry hero proceeds forward, you’ll have to use the fruit’s other powers to manoeuvre over the dangers that await above and below. Firstly, the berry will bounce from any surface that it comes into contact with. Walls within the levels, as well as the outside of the screen, act like bumpers that will propel the little berry into the air. The berry can jump too. Hold down the jump button and you’ll jump or you’ll make your bounce higher.

The game’s design is built around these abilities to guide the player every upwards. For example, in some levels you’ll find berries placed precariously next to each other so that a single jump will propel you upwards in a smooth, intentional manner. In other levels, there are staircases of blue goo that can be popped to send you every higher. Every level has a single, fluid route that’ll take you from start to end in a few jumps and less than 30 seconds. While it’s possible to complete most levels without finding this golden route, it’s nowhere near as satisfying.

It’s also far more dangerous. There are very few traditional platforming enemies or obstacles in A Night At The Races. There’s some spikes you’ve got to avoid and you’ll be avoiding the odd projectile but more than anything else, you’ve got to manage your own speed and momentum to avoid danger. That’s because if you miss any berries you’re supposed to be collecting, it’ll cost you a health point. Once one has passed the bottom of the screen, your health will decrease, so you’ve got to make sure you’re collecting each in turn. After the start of a level, the bottom of the screen becomes its own hazard too. Drop from a wall or platform and hit the bottom of the screen and you’ll lose health too. You start each level with 4 hearts of health at your disposal and once they’re all gone, you’ll be starting from the beginning again.

The arcade levels in A Night At The Races are grouped into chapters of 10. Each chapter is bookended by story progression (more on that in a second) and shares a common visual and music theme. Each chapter also introduces its own game play mechanic. This could be a new berry type, an enemy or an ability to use. Early on you’ll be guided to use the dash ability to cross sections of the screen quickly. Later, suicidal berries are introduced which propel themselves across the screen and need to be collected before they kill themselves or they’ll cost you a health point. Jump pads, homing dangers and more make up a heady blend of mechanics that are regularly mixing things up.

While there’s plenty of variety in the level structures in A Night At The Races, and many very impressive levels among the 200+ on display, there a few stinkers in there too. They stick out like a rotten berry surrounded by the quality that’s prominent elsewhere. The difficulty curve probably could have been rejigged too. In any chapter of 10, you won’t often find a linear increase in difficulty from level to level. Some of the second or third levels in a set of 10 are the most challenging with the subsequent 8/7 levels taking just a single attempt.

If you do find yourself getting hung up on a level though, A Night At The Races has some impressive approachability settings to keep you engaged rather than frustrated. In the pause menu, you can slow down the game play to a pace you’re more comfortable with. If you find yourself totally stuck on a level, you can even opt to skip a level and that won’t effect the story progression.

The narrative of A Night At The Races is its most interesting aspect. In essence, you play a game about playing a game. The twist is that as the night progresses, worrying events start to take place in the real world. After every 10 rounds of ‘No Berry Left Behind’, you’re returned to the real world where you’ll discover what has happened. Without spoiling it, the world around the lead character starts to fall apart in shocking ways, but the character is still determined to finish the race and win the life changing amount of money.

It’s an interesting narrative experience that has almost entirely divorced its arcade game play from its central premise. This throws up some interesting juxtaposition and it has an interesting effect on the impetus of the play. At times, the events of the real world make playing a video games seem inconsequential and daft. This twists later to shine a light on how important video games are as escapism at times. While it’s not at all obtrusive, this game tells a nuanced story that’s far more interesting than the arcade game play that it’s built around. That leaves quite a lopsided experience where I found myself wanting to get through the levels of No Berry Left Behind simply so I could see what was going on with the story. I might have even skipped a few levels just to see what happens.

A Night At the Races is an interesting if unbalanced narrative experiment. Despite its issues, it’s a peculiar indie curio that completely divorces its central arcade game play from its story which results in some odd effects. If you like original experiences, this is certainly worth the hour it takes to complete.

A Night At The Races is available now on Nintendo Switch (review platform) and PC via Steam.

Tags: A Night At The Races Mushy Jukebox Nakana.io