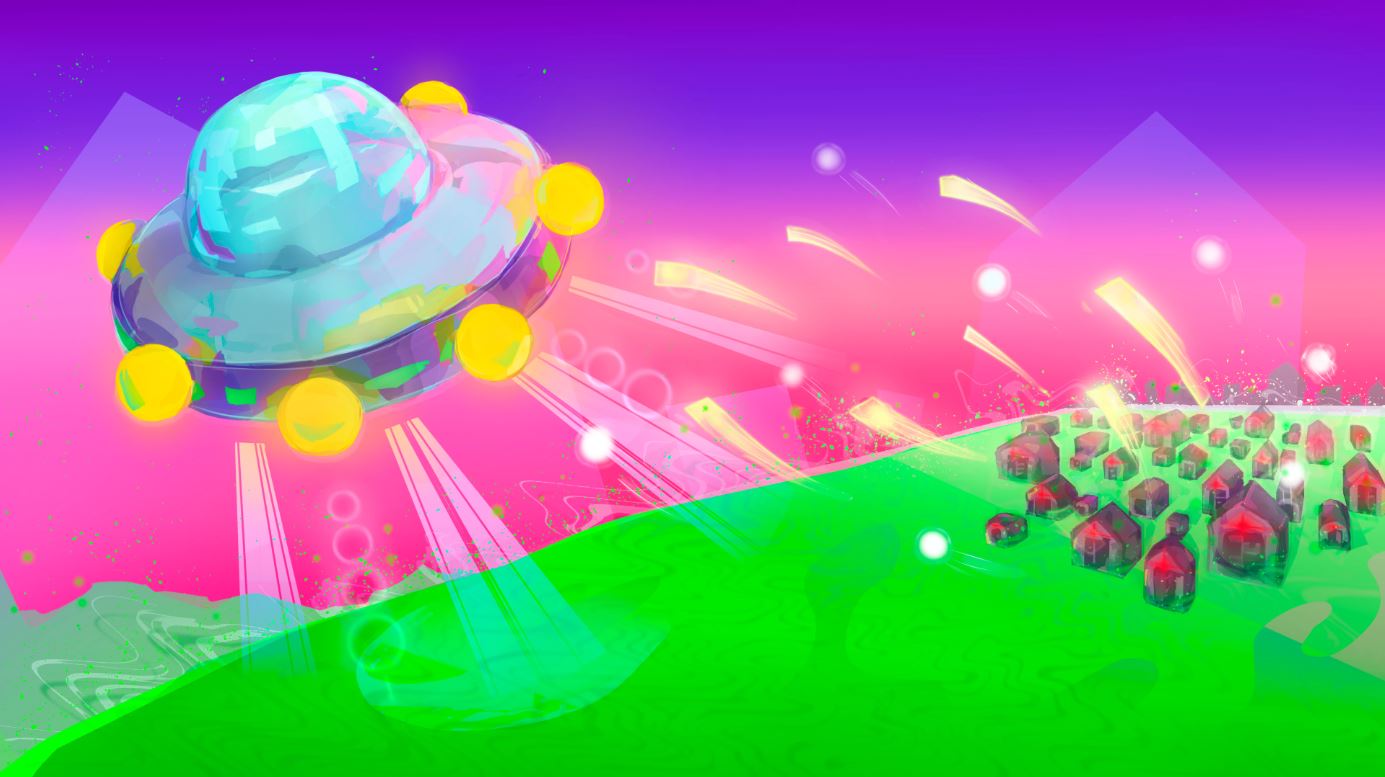 Games are supposed to be enjoyable, right? Sure, they might not be ‘fun’ in the traditional sense but you’ve got to enjoy something within them. This hasn’t changed in the past month has it? I didn’t miss a memo? Because Alienzix seems to completely disregard that requirement to be enjoyable. Instead, it’s a poorly though out and poorly executed experience that barely passes the minimum requirements to be considered a game.

Alienzix was originally released on Steam in 2017. That initial release was purely in Russian and was played with a mouse. The game only ever garnered 52 reviews and the ones that aren’t fake (so very obvious) were less than complementary. Thankfully, the PS5 release in 2022 has been translated into other languages (which I believe is a prerequisite to launch on Sony’s console) including English. Unfortunately, nothing else has changed.

In Alienzix, you play as a UFO. Your aims are left unexplained but if you’ve played a downward facing shoot-’em-up before, the game is intuitive enough to pick up and play. Your UFO can fly anywhere on the screen, even below the ground level while enemies fire at you. All of this happens on a single static screen with no scrolling involved. The aim is to destroy everything on screen in order to move onto the next level. Rinse. Repeat.

To begin with, the enemies in the game are simply static bases that shoot back at you. As you progress through the game and advance through the 8 chapters in Alienzix, other enemy types will join the fray. These include slightly bigger bases, even bigger bases and frankly large bases. I know. I know. Such variety. Eventually, you’ll be facing off against other UFOs that float around the screen and shoot at you. These eventually evolve into… bigger UFOs. See a pattern emerging? The bigger the enemy, the bigger the health bar they have and the more damage they can do to you.

So far, so standard. Alienzix gets these absolute basics right. It’s just that everything beyond that feels like a poor design decision.

Let’s start with the weaponry. Alienzix has a wide variety of space aged guns to use, 30 in total. Each has its own characteristics; some are like flamethrowers that do a lot of damage at close range while others explode across the screen like cluster missiles, destroying things you didn’t even aim at. To give the game its props, the array of weaponry on offer here is impressively big.

The issue with the weaponry is the way you obtain them. At the start of the game, you have equipped a slow firing basic gun that’s about as useful as a a condom machine in the Vatican. You’ll want to swap it out quickly and it’s easy to do so as these are constantly raining down from the top of the screen. The screen is often filled with them, so much so that you’ll sometimes end up swapping weapons 3 or 4 times in as many seconds. That makes it really difficult to do anything strategically. Try to swoop in close to a series of enemies using the flamethrower only to find yourself firing green blobs in random directions enough times and you’ll undoubtedly start to get frustrated.

That’s made all the more confusing and irritating by how busy the screen can be. This isn’t a bullet hell style shmup though. The busyness of the screen isn’t because of enemies. It’s caused by the weaponry itself. Some of the weaponry can cause screen filling effects that rival those in 2012’s infamously OTT game Asura’s Wrath. Good luck seeing what they hell you’re supposed to be shooting at, or what’s shooting at you, when the screen is full of blue circles bouncing all over the place. Victory is luck more than judgement or skill more often than not because of this poor design decision.

“Why don’t you just avoid the weapon pickups you don’t like then?” I imagine some of you asking. A valid question. Well, dear reader, there’s a few reasons for that. Firstly, the weapon pick up symbols aren’t very intuitive. You can’t ever be sure what you’re collecting is what you want it to be. Secondly, when I mentioned that the original PC version of the game was played with a mouse, that meant that the entire experience is designed around that input. The speed of the bullets, the weapon drops – everything – is designed around how quickly you can move a mouse cursor. Nothing has been changed about that here but instead of having the luxury of mouse pointer speed, you’re forced to use the Dualshock D-pad which is far too sluggish in response. You can’t even use the thumb stick or the touch pad. You’re locked to the least accommodating way to play the game on PS4. It feels like playing the game with one hand tied behind your back.

There’s just so many questionable design decisions included in Alienzix. An example – There’s a level in the game where the weapon drops stop entirely. If you happen to die during this level, you’ll be stuck using the default weapon which, at this stage in the game, is like firing spit balls at a column of tanks. Die once here and you’ll lose all of your lives in short order.

So many of the industry standards are simply missing here. You know that period of invulnerability that you usually get in a shmup after dying? Those few seconds where you character flashes and you can’t take damage? That’s not here despite being an staple of shmup games. It’s common to lose a life and then immediately lose another as you attempt to find yourself among the carnage on screen.

The visuals and soundtrack for the game are just so bland and uninspired too. The games original description states it’s “a shooter of the Windows 2000 epoch” but I don’t think the game looks or sounds any more impressive than anything on the Commodore Amiga. There’s virtually no personality or charm to it.

If I was a cynical man, I’d lump Alienzix into the same pot as the likes of Funny Truck or Lizard Lady – a quick port of a poor PC game with an easy trophy list to take advantage of the trophy hunting community. The reason I think that is the case is because there’s a cheat menu which can be used to unlock almost all of the game’s trophies within a few minutes. Even if you don’t use the cheat menu, there’s around half an hours worth of content in total, incorporating a few failures. Honestly, there are many better shoot-’em-ups that are lightyears ahead of this to spend half an hour with. This one just isn’t enjoyable.

While it gets the absolute basics right, Alienzix is plagued by poor design decisions that make it a thoroughly unenjoyable experience. Short, bland and frustrating to play, there are plenty of other shmups that are more worthy of your time than this.

Alienzix is available now on PlayStation 4 (review platform) and PC via Steam.