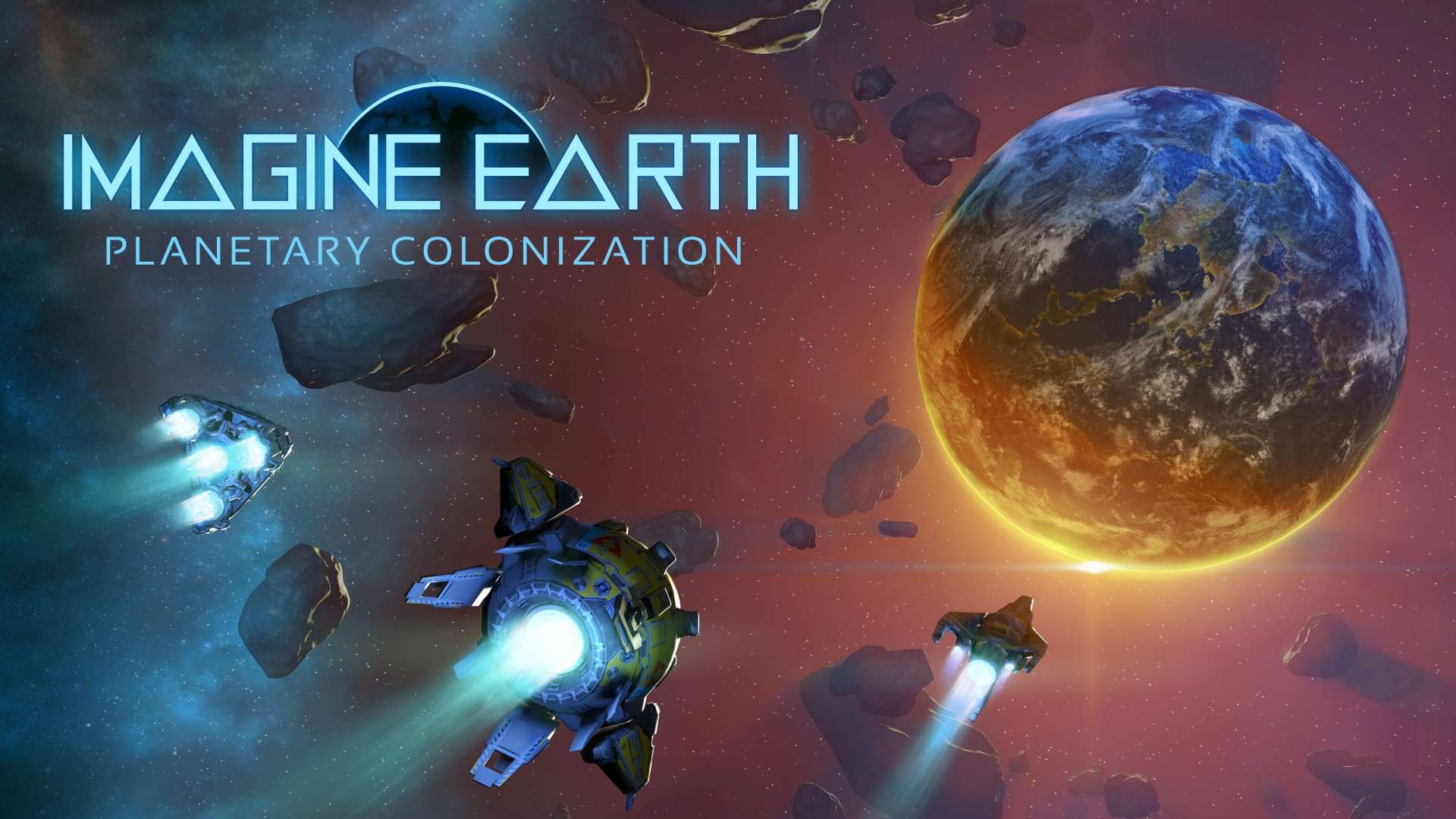 Imagine Earth is a resource management sim with a heavy lean towards sustainable technologies. But is it preachy or a fun and practical solution to all Earth's problems? The Finger Guns Review:

Imagine Earth is Offworld Colonies, the game. When Rick Deckard looks up into that dark acid rain sky and laments the damage that climate change, pollution, mega-corporations and their relentless drive toward growth have wrought on planet Earth, this is what’s happening out there. This is what it’ll be like when Jeff Bezos and Richard Branson are out in space permanently, having had the epiphany that there’s money to be made on them planets.

It is somehow without a sense of irony then that Imagine Earth casts you as a shill working for a mega-corporation called Imagine Earth Ltd, travelling to new planets ripe with resources and then setting up and managing new colonies to strip mine these worlds of all they have. ‘But this corporation is the good guys,’ they shout. Earth is defunct, unsalvageable. We have to seek out new places for humanity to live, and not repeat the mistakes of the past, while at the same time being paid and receiving orders from one of the same types of corporations that polluted Earth.

The crux then is to use your newfound power for good. You are at the helm of terraforming and resource gathering technologies, research budgets and trade freedom, capable of bending all towards sustainable futures in harmony with the world you find yourself on.

You are often forced to use the lesser filthy technologies, such as coal mining, in order to get started, before you can buy the licenses necessary to use sustainable technologies, biomass power plants, wind farms etc, and then slowly do away with your climate change-inducing buildings.

Imagine Earth’s rhetoric tows this line between growth for the company, and sustainability because like, we’re super green now. Maybe it’s the pessimist in me, I can’t see the good in this fictitious megacorp. I suppose it’s how companies should work, and I hope one day humanity manages to rise to this level of Star Trek-like utopia but the moment I hear megacorps and the pursuit of growth, my suspicion of the unseen shareholders grows. Even the sustainable tech is locked behind a fictional paywall of patents and licenses. The people in the future are no more green-minded than we are now, but the difference is they’ve learned to make money from exploiting climate change and big terraforming companies.

Imagine Earth plays like a planetsize version of the recent Spacebase Startopia, with spherical worlds you can rotate all around like Super Stardust Delta. You build onto a grid of triangles, with residential buildings and many production facilities enhanced by sitting next to their fellows, and creating little hexagons of mutually congratulating areas. You must manage power demands, food production, mining and the creation of goods for the citizens of your utopia. Soon you can expand this into trading with alien merchants, up- and down-voting global congresses and their policies, and researching around a hundred enhancing technologies.

The intention always is to move through the tech towards sustainable models, all the while staving off starvation, pandemic, boredom and death for your colony. Possibly because there is such a wealth of available options, Imagine Earth is quite convoluted in its mechanisms, requiring a lot of concentration during the missions tutorials. Campaign mode does a good job of introducing new technology and ideas gradually over ten planetary missions, but if you ever miss how to do something the rest of the game and help screens don’t do much to put you right.

What is needed to advance is often obscure. Take tech licenses for example, those patents for green tech I mentioned. The only guidance you’re given to get more of them is to increase your colony ‘value’, but barely any instruction on what it takes to do this. At the same time, buying the types of infrastructure that would enhance your colony value, you guessed it, costs tech licenses. It’s a chicken and egg scenario. The way to sort it is to just continue building at the level you are at, unlocking them over long periods of time, or buying them for exorbitant sums from traders, but I was stumped for long periods at a time, unwilling to further pollute my planet to earn them, but then never getting to the enhanced sustainable options they allow you.

Another example was producing goods. You can spend hours of your time trying to work out why your workshops and laboratories aren’t producing anything, only to eventually, eventually find a storage capacity distribution menu, that needs space to be allocated to particular items. It would be fine if when you clicked something it told you what the issue is, and how to fix it, but instead, the building just sits there inert, mocking you and your tiny primate brain. Imagine Earth only tells you once and then hides the vast majority of its clever and imaginative systems behind a dozen menus, many of which are not apparent they even exist.

Working with other settlers in harmony is a nice touch, rather than just starting a war, although you can do this too. Donating goods to a competitor can net you an ally, which can result in alliances, being able to buy shares in their settlements, and reaping dividend profits off their hard work. They might even reciprocate the favour later on.

The game seems to be monitoring an overall limit of pollutant-creating resource mining and then throwing adverse weather or natural disasters at you. It’s clever, and encourages you to build sustainably, but it never really rises above a gimmick. Tech and new buildings are painfully slow to research, patents take too long to earn – I ended up speeding up every part of the game I could via a little fast forward button in one of the aforementioned hidden menus. It ends up feeling grindy and drawn out, which further sapped my enthusiasm.

Imagine Earth’s graphics may not be its strongest suit on the Xbox One. The planets are vibrant, but the polygon count looks low and things are very gamified. Real worlds don’t exist in neat little triangles, so the planets do end up looking a bit odd to fit in with this mechanic. What is nice it that despite it being on Xbox One I didn’t experience much slow down or frame rate drops, which I cannot say for all management games I’ve played on last-gen consoles.

There are a collection of characters, mainly your colleagues and commanders, who will teach you how to play and alert you when things go wrong. They are static art, with sort of oddly animated mouth movements. While I really did appreciate the voice work for all these interactions, I can’t say the same about the characters themselves. They have no real personality, either towing the Imagine Earth party line, or out for themselves or their singular trade.

I compared it earlier to Spacebase Startopia. One of that game’s strengths is that the space station teems with life. Imagine Earth suffers from being impersonal. You build city districts but you can’t zoom in and see your people. You feed them and power their homes, but not one ever has a name or face. It made the management part of the game come to the fore, but with a story that is really just colonising and problems while colonising, it would have probably interested me more had there been more narrative and reasons for me to care about the little world I was making. For me, making money for the shareholders, or even making a sustainable paradise was never really enough, because I’m not driven by those types of attainments. If the game had introduced suffering planets more often, with characters, and lives to save, I think I’d have wanted to put more hours in.

If the game is for you, you will find an endless mode outside of the campaign, which procedurally generates planets for plenty of relaxed replay value. You can also experiment with making your own planets using terraforming devices and such, but again the controls and menus were a little overwhelming here.

Imagine Earth has plenty of complexity, mechanics and management options that will probably delight those who like Anno and Civilisation and need a new fix. Its obtuse for newcomers and places a high premium on learning its systems, rather than being easy to pick up and play. A lack of personality and characters, or interesting mission goals took me out of the immersion, and left me with management and green sustainability options. Good things, but not ones that drag me back to a game when I need a gaming fix.

Imagine Earth is a sometimes overly complex management sim with a laudable penchant for sustainability and green tech, even while it forces you through all the bad tech to get there. It lacks much life and personality, but if you need a new coloniser sim in your life, it’ll scratch that itch.