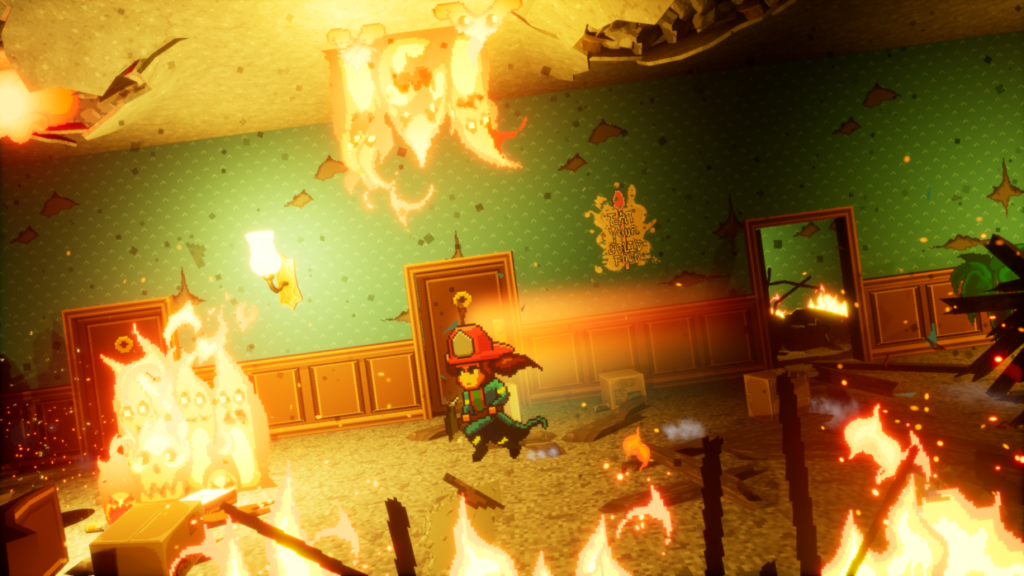 While its combination of 2D pixel art and 3D environments makes for an evocative look, Firegirl: Hack 'n Splash can't quite stand the heat in the gameplay department. The Finger Guns Review.

While its combination of 2D pixel art and 3D environments makes for an evocative look, Firegirl: Hack ‘n Splash can’t quite stand the heat in the gameplay department. The Finger Guns Review.

On paper, firefighting should be a really great pairing with video games. There’s action, danger and a pretty clear objective. Y’know… but out the fire. It’s miraculous then that there hasn’t ever really been a good firefighting game. Most of the games in this genre are utter tripe, little more than a boring sandbox of busywork. Others, like Real Heroes: Firefighter which take an action movie vibe, and sims like Embr lack… something. Here comes a new challenger though – Firegirl: Hack ‘n Splash Rescue. From Dejima games and publishers Thunderful, Firegirl aims to do something different in the firefighting theme by blending it with a 2D platformer and roguelite elements. Unfortunately, it feel incomplete and a little singed around the edges.

A decade after a slew of fires terrorised the city, costing her father his life, the titular Firegirl has signed up to become a Firefighter. A new series of fires have sprouted out of nowhere with some mysterious origins. Surrounded by a curious cast of supporting characters, the heroine must attend these fires, rescue who she can and hopefully get to the bottom of who’s starting them.

That story is drip fed to the player over time. As you play the game and pick up certain collectables or rescue particular characters, you’ll further the narrative of the game. Told via cutscenes, that narrative isn’t deep or terribly exciting but it does help to keep the player motivated – until it doesn’t.

There’s a very uneven level of story progression here. The story lays itself out quickly towards the start before slowing down significantly. Without spoiling things, the aim of the game is to collect Tomes which will allow the Firegirl and pals to put an end to the spreading fires. This happens rapidly towards the beginning, the game serving you important level variants but becomes a slog before the midpoint in the game.

Through the fire and the flame

At its core, Firegirl is a 2D platformer. While the world in which the game is played is 3D, the game play takes place on a 2D slice on that world. From a fire station hub, you get to choose to attend the fire that has started somewhere in the city. You’re given a brief on the way, letting you know how many people are trapped at the location, and away you go.

The protagonist is equipped with 2 different tools. The first is the fire hose. Connected to a water tank that depletes with usage, this hose is used for – you guessed it – putting out fires. Point in the direction you want to spray the water and This hose can also be used to propel the Firegirl through the air. While in the air, the fire hose will either slow a descent or spirit the heroine upwards. This is tricky to get the hang of as it’s dependent on remaining water pressure and momentum, but it can be really quite fun to zip around a level like a flyboarder.

The other tool is the trusty fire axe. With it you can cut through doors or debris that are standing in your way. Piles of wood, stacks of luggage, stacks of boxes are more are dispatched with just a tap of the axe button. A swing and the obstruction shatters to bits.

Where Firegirl differentiates itself from every other games involving firefighting is that the fire is anthropomorphised. While there’s plenty of faceless, flickering flames that pose a danger, the more deadly foes are the sentient fire-based enemies. Groups of grunting flames will block your path. Little turrets will routinely shoot off balls of lava that arc across a level. Bats made of flame will home in on the hero. There’s not a vast number of flame based enemies in this game but there’s enough of a variety to keep the first few hours of game play fresh.

Out of the frying pan…

Firegirl is quite a challenging game. With each new fire to tackle, you’ve given a limited amount of time to fight your way through the procedurally generated level, rescue all of the people trapped there and then find an exit door. For every flaming enemy you douse and extinguish, you’re rewarded with a second or 3 of extra time. You might get lucky and find an Extra Time pick-up hidden around the level too. Adding new time to the remaining balance only works up until you have just a minute remaining. Once you’ve passed that threshold, you can no longer add any new time to the balance. It’s a smart design system that keeps pushing the player to attack the level to continue to gain time followed by a spring to the end.

At the end of each mission, no matter the outcome, you’ll be rewarded with at least some cash. This is where the roguelite elements of the game come to the fore. The available balance can be spent on improving equipment – better water pressure, bigger water tank, more efficient heath kits, added armour, more time per mission – or to improve the rewards after each mission, like reduced cost on all items or bigger cash awards after a success. There’s a steady snowballing effect which should allow you to keep up with increasing challenge that the game poses.

Unfortunately, Firegirl currently feels unbalanced. As you progress through the game, new locations are introduced, as is a higher number of survivors that need rescuing. At the end of an attempt at a level, if you’ve not rescued all the people trapped in the location and reached an exit door, you’ll receive a vastly reduced reward. Even if you managed to get all of the civilians to safety and spent a full 4 and a half minutes (quite a long time in Firegirl terms) exploring and putting out fires before the time runs out, you’ll get the same reward as if you had died within the first 20 seconds. This means that the game really starts to feel like a slog at times, dying after a lot of effort for very little reward, all working towards targets which feel an eternity away.

Going up in smoke

While I imagine Firegirl is supposed to be a testing game, most of the challenge of this game comes because of rough edges, glitches and bugs. They’re numerous. Quite often, a piece of debris which isn’t on the 2D plane of the game will completely block off your stream of water. When it can be a limited resource, spraying it into nothingness is irritating. The same often happens which spraying through a doorway. Despite shooting your jet through an open space, the water seems to do nothing to the fires on the other side. Of course, you could pick up some water collectables to refill your water gauge – but they’re currently broken too. More often than not, time and water pick-ups are hidden behind world objects that can be smashed with the axe. Right now, the pick up disappears alongside the destroyed debris or world object. The safety period after damage you usually get within a game like this? That few seconds of invulnerability that stop you from getting railroaded by repeated damage? It needed more work in Firegirl. It’s not uncommon to watch the heroine bounce from one danger to another because the invulnerability is timed rather than contextual. The menu options that appear on screen in the fire station have a habit of hanging around on the screen, long after you’ve moved away from the area in which they should appear. The game has hard crashed on my a number of times over the past few weeks. To be honest, Firegirl feels like it needed some time in early access before launching to iron these issues out.

While Firegirl has more than a few singed edges, there’s definitely potential here. The visual style, an evocative combination of 3D world and 2D pixel art characters, is very easy on the eye and the core concept is solid. If Dejima Games are given the time to patch out the bugs, fiddle with the balancing and smooth out the plot pacing, Firegirl will be a good game eventually. Right now though, it’s distinctly average.

Firegirl Hack ‘n Splash Rescue is available now on PC via Steam (review platform). A console version is planned for release in 2022.