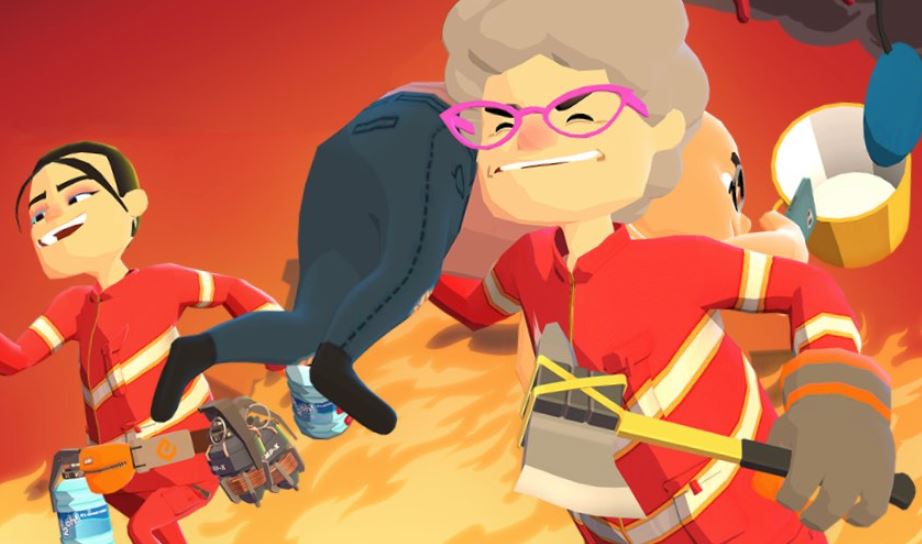 Embr finally arrives on PS4 and Xbox One. Lets put out some fires! The Finger Guns Review.

Embr finally arrives on PS4 and Xbox One. Lets put out some fires! The Finger Guns Review.

There’s probably a reason why firefighters are trained for months before actually given the job of saving civilians from actual fires. Embr, a firefighting ‘simulator’ from the lovely folks at Muse Games attempts to answer the question of what exactly would happen if firefighters were as regular as you and I, awaiting a call like Batman but pocketing a nice wage if we somehow managed to save human lives as well as our own without even having to put out the damn fire. Your possessions are meaningless, let it burn, right? Embr is a statement on the dank obsession with engorging upon the ever-expanding bosom of global capitalism that we may have seen in gaming form for some time.

Or, it’s just a game about putting out fires. I mean, take your pick.

My history with Embr goes back a little. Way back in the heady, non-Covid days (aka ‘The Before Times’), bright eyed and bushy tailed, myself and a young Greg Hicks scurried our way to London town to EGX Rezzed to play the latest and greatest achievements in independent video gaming. One such game was Embr, and I officially hold the much sought-after title of being the first person in Europe to have played it, as I was told by the wonderful reps Muse Games had that day. I sat down to play the game and had a blast. Two years, an entire pandemic and two Covid-safe series of Strictly Come Dancing later, I’m back on the beat, ready and willing to slide down a massive pole to save the lives of strangers that seemingly haven’t made any conscious effort to reciprocate my unfathomable generosity and the first thing I pick up on is, well, this feels and plays exactly like what I played in 2019.

Embr is a first-person simulator, where via a phone app you can pick and choose which fires you want to bother putting out that day. Through the app you can see which fire-putting-out-ing would be the most profitable, allowing you to make judgements on their difficulty. Of course, if you want to beat the game you’ll have to do them all, but it’s nice to be able to pick and choose to see what level you’re at from the outset.

On your firefighter person you’ll have an axe, a fire hose (which you can fill up in your burning houses kitchen sinks, water coolers etc..), a BlingFindr (an app on your phone you can use to locate clients you need to save in each location) and as you progress through the game such as a trampoline, water bombs, crash mats, an ‘ice Accelerator’ which can cool smaller areas, a fire extinguisher which, well, you know and an assortment of other random and bizarre tools which real firefighters probably don’t ever use to save lives. Like a grappling hook, for example. As cool as that would probably be.

And as you can probably tell from the list of tools above, it’s all pretty good fun. Being able to charge into a blazing inferno and throw clients out of very high windows in order to save their lives never really gets old, and there’s a huge sense of satisfaction when each location is complete. Embr also encourages you to steal as much money as you can find in each house, so be on the lookout.

As the game progresses you’re able to unlock different missions for areas you’ve already completed, along with additional emergencies. As the levels get tricker, as does your navigation around the houses, with barred or locked doors to content with. Fortunately, you have a freakin’ axe cus you’re a firefighter, so just smash it to bits. As you upgrade your tools you’ll naturally find the levels easier to navigate, but no less easier to complete as the levels burn your face off in an attempt to save your clients. If you die, you get immediately replaced by another ‘respondr’. Ain’t that just the way, eh? Embr teaches us all a lot about our disposable parts to play in existence and I’m not entirely sure it even knows it’s doing it.

And whilst it’s all a bit of laugh, as burning houses and people usually are in the wacky world of video games, Embr isn’t easy, and the unfortunate physics jank makes levels more frustrating than they perhaps would be otherwise. Getting in and out and saving clients, whilst easy enough on the surface, can become tricky when you’re faced with obstacles the longer you let the fire burn around you. Getting the fire out can be difficult as it spreads, finding the source is paramount (normally a faulty lightswitch that needs to be turned off). Then of course you’re dealing with the humans, the most annoying of all the things.

Whilst some can be easy (sitting there on their phones whilst their lives burn down around them – what an allegory), when they’re running around in circles near the front door awaiting you to pick them up and throw them out, you start to wonder why they can’t just walk out. Instead, it’s up to you.

And yes, if you’re wondering there have been times I’ve seen this happen, picked them up, ran to the very top of their burning houses and threw them out of the top window on the safe mattresses below, just to give them a bit of adrenaline,then you’re absolutely right I did. Or to make myself laugh when they miss the mattresses completely. You can lose money in doing so, but lordy is it worth it just to watch.

It’s the little things, guys. Life’s too short not to throw annoying people out of windows given the opportunity.

From a visual and technical standpoint Embr isn’t going to win any awards, but everything works about as well as you’d expect. Whilst the menu presentation is smooth and easy to navigate and the adverts on loading screens are fun and entertaining, it’s all a little basic and whilst it matches the aesthetic Embr is clearly going for and are crisp (particularly through a PS5), it’s just all very typical.

The enjoyment comes in finishing up levels with a decent score and saving as many people as you can. In multiplayer it’s a laugh over and over again as you’re screaming to get someone to turn off the damn light switches so we can calm the fires, or break windows so the gas leaks can escape. In single player, it can get a little monotonous.

There’s plenty to enjoy about Embr, but playing with friends is where it really comes alive. The single player is fun, but use it primarily as a tool to get good with your mates. They’ll thank you, that’s for sure.

Now then, Respondr. Get out there, save some lives and make some serious bank.

Embr isn’t going to change your life, but if you’ve ever dreamed of running out of your office job through a window to save innocent civilians caught in a blazing inferno with nothing but a hose, an axe and water bombs, there’s no reason why you shouldn’t sign up to be an Embr Respondr immediately.

Embr is available now on PS4 (reviewed on PS5), Xbox One, Switch, Stadia and PC.