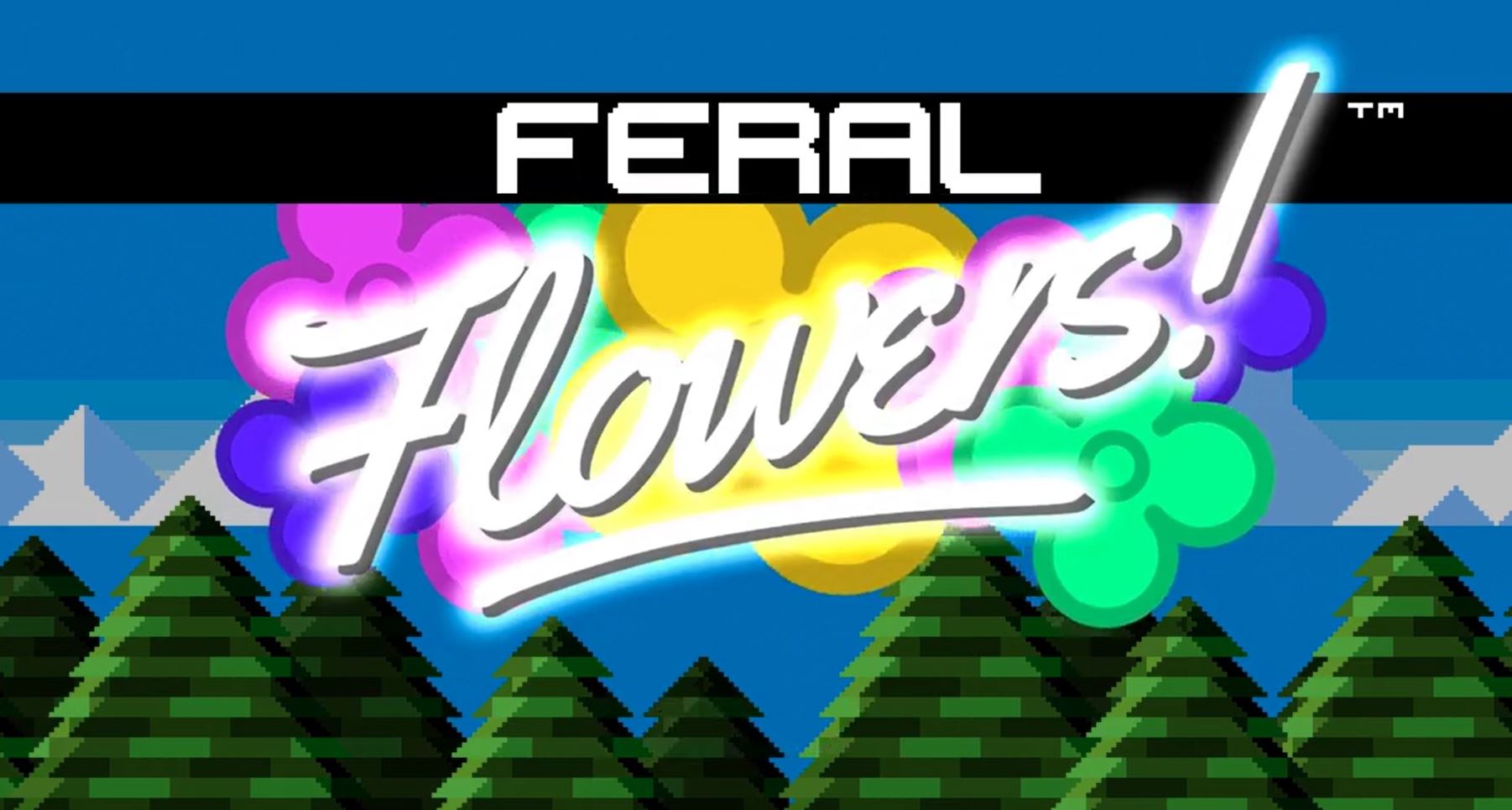 Combining the thrill of time based arcade gaming and inventive 2D platforming, Feral Flowers is a cracking game. The Finger Guns review.

Combining the thrill of time based arcade gaming and inventive 2D platforming, Feral Flowers is a cracking game. The Finger Guns review.

As a critic, it’s a real pleasure to have the opportunity to play relatively unknown games and then spotlighting the diamonds in the rough. That’s the pleasure I’m getting out of writing this review of Feral Flowers. A roguelike platformer that taps into the joys of coin-op arcade gaming and old school platforming, it’s a heady blend of influences that feels like a thing all of its own.

For those of us old enough to remember, cast your mind back to the heydays of arcades. The flashing lights, the chirping sounds, the bustling crowds. Feeding pound coins into an arcade machine like there was no tomorrow, you could easily part with a tidy sum of money. That’s because, whether we want to admit it or not, those games were designed to take money from us. They usually did it via 2 different methods. The first was a steady increase of difficulty. Once you’d finally perish, you’d be asked to ply the machine with more money. The second method was to limit your time with a game. You’d often see this method in racing games with checkpoints. The better the player skill, the longer you’d stay with the game – but you’d always eventually run our of time. A large timer would count down the remaining seconds and once that hit zero, it’d be game over (or, more appropriately, “insert coin”).

Stop And Stomp The Roses

While Feral Flowers isn’t coin operated, it makes use of this second arcade gaming system. In the game, you play as Quigley the Gardener. For unexplained reasons, Quigley is at odds with the flora in his garden. You begin the game inside a simple level, Quigley on one side and a flower daintily swaying on the other. Jump onto of this flower and you’ll see 20 seconds added to a timer. This is it. You’re off to the races.

Feral Flowers is made up of 92 single screen levels, grouped into themed worlds. The aim of each level is to jump on top of each static flower, killing them, until the screen is cleared. Stomping on each flower adds more time to your clock that’s counting down. These flowers aren’t just going to take that lying down though. They are feral, after all. While some flora will just sit there and let you jump on them, others will defend themselves by firing particles of pollen or laser blasts at you.

Where Feral Flowers differentiates itself from most other platformers is its unusual failure conditions. There’s no health bar. There’s no extra lives. If Quigley the Gardener gets hit by these blobs of pollen while there’s still time on the clock, he’ll get batted around. Sure, it’s frustrating, eating further into your available time, but it’s not “game over”. That changes when the clock runs out. Once you’re out of time, those usually inoffensive particles of pollen will cause Quigley to sneeze, and that means your run is over. What’s more, as the timer hits zero, the screen will start to fill with randomised pollen balls which make the screen a bullet hell maze.

You can still pull off a clutch victory here though. If you manage to slip through the labyrinth of moving pollen and jump onto the remaining flowers, you’ll get to move onto the next level with whatever time you earned from that last flower.

Getting A Black Eye, Susan

When you do eventually sneeze yourself into a “game over” (and it will happen), you’ll head back to the start of the game. There’s no level select and there’s no checkpoints here. Feral Flowers is a roguelike where nothing is retained. Thankfully, progress into the game does make subsequent runs easier. When you reach certain levels, you’ll open up warp tunnels which skip chunks of the game you’ve previously mastered. You don’t have to go too far our of your way to spot theses and it means you can get from Level 1-1 to 8-1 in just a few moments, for example.

Each of the worlds in Feral Flowers, most of which come in groups of 10 levels, has its own theme. That theme includes its own unique mechanic. While there’s a lot of genre staples included here – moving platforms, platforms that fall away shortly after being touched, switches that open and close doors – its in its trickery and features that this game really shines.

In one zone, the levels loop vertically. If you drop off the level at the bottom, you drop into the level from the same position at the top. In another world, walls of blocks can bar your path forward – but can be destroyed by the pollen fired from the flowers. The flower bed of enemies continues to grow as you progress through the game; initially they just fire along predetermined paths but before they’ll track your position. Before the end, you’ll be facing off against flowers that can shoot lasers across the entire screen if they see you as well as flowers that spit out pollen at an insurmountable rate.

This is where the few pick-ups in Feral Flowers come into play. There are times in this game that the hazards the flowers put forward are just too much for Quigley alone. Rather than bounce off an impenetrable wall of pollen fire, the gardener has to find a way to make himself immune, or a way to divert the pollen else where. Using a nondescript bottle of potion, he can just power through the pollen as it makes him invulnerable. There’s also hexagon shapes which create a safe zone when he’s hit by pollen, diverting the grains away from him.

Breaking up each quarter of the game is a boss battle. These work much in the way the usual game play does but with everything cranked up to 11. The time limit is still a factor but thankfully, you’re usually arriving at these boss fights with enough time to make a few mistakes. These boss levels combine everything you’ll have learned from the previous 10 to 20 levels and acts like a skill gate. In one battle you’ll be jumping on a series of smaller flowers in order to open up a looping section, like the previous series of levels had championed, for example. The boss fights are all particular highlights.

For the most part, Feral Flowers is very well designed. It takes the design tenets that have formed the 2D platforming genre and makes sure that everything is positioned in a way to elevate the tension generated by the time limit. There’s a constant ticking which drives you forward. As that clock gets close to zero, the screen fills with a pink hue and the ticking gets ever more threatening in tone. Those last 5 seconds can get very frantic but when you nail a tough section, Feral Flowers is very rewarding.

It’s not all perfect however. There’s a few niggles which need discussing. One particular flower type – which makes you jump on its head twice – can get in the bin. I don’t feel like it added anything in terms of challenge aside from its use in one level that forced you to basically replay it in its entirety after hitting the flower once. The positioning of some flowers, on the edges of walls, highlights the perhaps… overly aggressive way they bounce Quigley back. You see, if you walk into a flower rather than land on it, it’ll repel you away like a blob of flying pollen would. It feels a little too overexuberant with how punishing this is at times, especially when you’re landing almost side on to a flower sometimes. There are times when I feel like I’ve landed on a flower and I find myself being bumped off it because I’ve come down on its side.

Then there’s the art style. The visuals of Feral Flowers are inoffensive but are equally as uninspiring. It feels like an art style I’ve seen many, many times before, ridding it of any originality. It’s safe and instantly familiar, which is probably a good thing when your mechanics are a little unusual for the genre, like they are here. Still, I would have loved to see a more original thematic feeling.

All in all though, Feral Flowers is one of those diamonds in the rough that critics hope they’re going to stumble across. I was thoroughly entertained for the 5 & 1/2 hours it took me to finally best the gradually increasing difficulty that his game poses, culminating in a great brilliant boss battle. Even my kids want in on the action now…

While it looks similar to many other 2D platformers, Feral Flowers leverages old school arcade mechanics to give its moment to moment game play a real thrill that’s quite rare for the genre. Its platforming is slickly designed, its roguelike elements aren’t overtly punishing and it’s constantly throwing something new at you so it stays fresh for 5 compacted hours of play.

Feral Flowers is available now on PC via itch.io and via Steam.