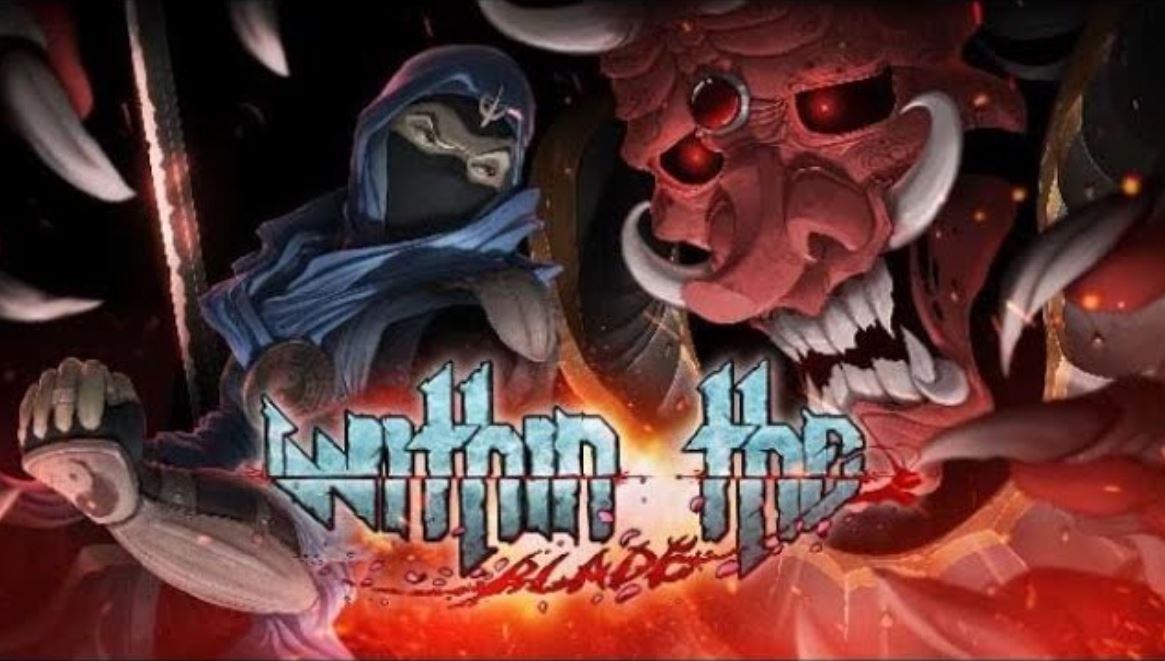 Within The Blade is a 2D ninja slash-em-up for fans of Katana Zero or The Messenger, but it struggles under the weight of comparison. The Finger Guns Review:

Let’s start with some fun trivia: Within the Blade was previously titled Pixel Shinobi: Nine Demons of Mamoru – bet you didn’t know that. Actually, you probably did. That name is still all over its Steam page. I assume it was changed due to it being cumbersome and too close to that other series called something like, I don’t know, SHINOBI, which has been around since the late eighties, and was also pretty heavily pixelated. A title and logo change hasn’t helped much because that new logo (see above) really does not do what the designers probably wanted. It’s almost impossible to read the word Blade, and the game ends up looking like it’s now called ‘Within The’. Within the what?

Logo and naming gripes aside, if there’s one thing that has me coming back to viddy games time and time again, it’s Ninja. Real Ninja mind, not Fruit Ninja, or Corporate Ninja. Within The Blade is a 2D side-scrolling ninja slash-em-up with ambitions of stealth. It feels a little like a fast and ultra-violent Shinobi, or maybe even closer to the recent Katana Zero with a little dash of stealth in the mix. It’s a modern retro experience, full of coin collecting and platforming stages, and maybe the best comparison I can make is to Sabotage Studio’s The Messenger. However these comparisons are always to its detriment. Within the Blade constantly reminds me of many other better games. It bravely throws its shurikens of ambition but ends up barely hitting anything.

The game starts like the Messenger – your hidden Shinobi village, where the clan of the Black Lotus reside, is under attack, and a few of your brothers-in-arms have been captured by some kind of demon army. Judging by the game’s previous title and the bosses that appear every few stages, I’d hazard a guess it’s the Nine Demons of Mamoru, but there’s little in the way of exposition, just your Sensei sending you on your way really. Turns out a diabolical warlord daimyo has been meddling with demonic forces, and now the whole of Japan is in danger.

Beyond a few missions that have a little basic dialogue, and some prisoners to save, there’s not much more I could call a plot, but there’s a premise. Seek out the nine demons, slay ’em, and save your village. Does it need more? I’m not sure. But at the same time, I was bored by the third demon, and there was no real character development. The lead character Hideaki is paper-thin, existing in a state of limbo with no past, no back story, and no personality, just dogged adherence to his Sensei’s orders.

The gameplay follows a left-to-right side-scrolling platformer format, split into individual levels and sections, and then a quick return to Sensei after each section to buy some skills. Within The Blade is all about stages, done fast and injury-free, and with particular care taken to complete objectives, which are a constant pressure, I mean presence, in the top right of the screen. It is not a metroidvania; its almost completely linear and stage-based. At the end of each stage, you’ll get a score and some experience points to spend on a web-like skill tree, full of move enhancements. You also aren’t able to go back and redo stages, the game autosaves and moves on automatically.

It’s a 2D slasher, encouraging you to get up close and personal with the generally human guards and henchmen of the demons. You’ll jump and bounce around, trying to get the drop on them, but most of the time it’s tricky to approach effectively without being seen.

Thankfully there is a passable combat system that allows for quick slashing combos and if you manage to dive in unseen, a satisfying one-shot kill. If you aren’t so lucky, enemies equipped with a blade can block yours, and then come at you very efficiently. Some have bows, pikes or swords, and each needs a slightly different strategy to overcome if you want to keep your health intact. You are also able to block so these duels can be tense, fast and deadly.

Within the Blade rarely teaches you how to play beyond the first couple of screens. I was taught double jump for example, but not to crouch in the grass, or that I could drop down on enemies for stealth kills. You are barely taught how to use any of the massive variety of bombs and secondary weapons available, or that you can hang off your grapple rope like you’re Spider-Man. I’m still trying to see if there’s a contextual kill like that but so far, I’ve been unable to pull one off. Because it doesn’t teach you the ropes (sorry), Within the Blade is in danger of alienating its own players. Not every player wants to blindly experiment and fail multiple times. Some just want to get from A to B silently and efficiently. I think an expanded tutorial, or one integrated into a more interesting story would have been a massive improvement.

Stealth is also an issue. It’s difficult to pull off a stealthy approach most of the time; firstly because you are on a timer and encouraged to move fast ala Katana Zero; secondly because the controls for a stealth kill are counter-intuitive, requiring you to continue to hold the block button to creep-walk and let the game contextually kill for you (I was forever releasing it to kill which didn’t work); and third because of the terrain. It’s a platformer, so often you need to jump to get to an enemy. You can’t creep and jump, and you don’t land silently. Every time this is the case, it wrecks your stealth, and commits you to a fast melee kill instead. It feels like the game was designed as a fast melee slasher and that stealth was implemented as an afterthought – level design, enemy placement and the array of available moves, all these things point to stealth being secondary.

Which is a massive shame because the moment I saw stealth was available, like many players, that was the route I wanted to take. Instead I was forced most of the time to expose my position too early and play the game as a fast Hotline Miami-style enemy movement memoriser.

Shops and NPCs aren’t implemented very well either. You can talk to people in the village but it never says who talks and who doesn’t – it’s a case of tapping D-Pad Up on everyone and hoping for the best. Shops are the same, with no real indication that there is a shop to use unless you press up as you walk along. You can craft in your own hut, but you are never taught how to do it despite there being around 200 recipes to concoct. And finally for things the game doesn’t tell you, your weapons break ala Breath of the Wild. First time that happened with my prized katana, I was forced to fight bare-knuckles for level after level afterward, including bosses, making them a lot harder to complete due to the lesser attack power.

Bosses in general are a good part of Within The Blade. There’s a fair bit of variety between the different boss types and each needed a different strategy, same as the enemy types. Kudos where its due, someone on the development team did a fine job with enemies.

Within the Blade employs a stark, large-pixel style, maybe a little better than 8-bit, but not as good as 16-bit was capable of on a good day. There’s some good animation and movement, things are fast and flashy, and if you want it, there’s copious blood on display after every beheading and frantic swordfight. It’s the level of blood-letting that would have had my mother ejecting the game and banning it, had it come out in the SNES era.

Within the Blade struggles to make any kind of impression in a genre that has seen some massive highs in gaming history. It apes its competition while bringing almost nothing new to the table. The Messenger does platforming and story better, Katana Zero is more visceral and fun, Mark of the Ninja is far superior in stealth mechanics. Within the Blade can be fun in short bursts, but without engaging stealth gameplay it falls at a hurdle it sets itself. Its dance of fast kills is far closer to Katana Zero than the game it would have you believe it is, but it’s just not as good.

A 2D slash-em-up that’s as instantly forgettable as a ninja flashing past in the night, Within the Blade succeeds at fast-paced kills and decent bosses, but fails to design for stealth or differentiate itself in a genre full of superior experiences.

Within The Blade is available July 16th 2021 on PS4 and PS5 (review platform), Xbox One and Xbox Series S|X, Nintendo Switch and PC.