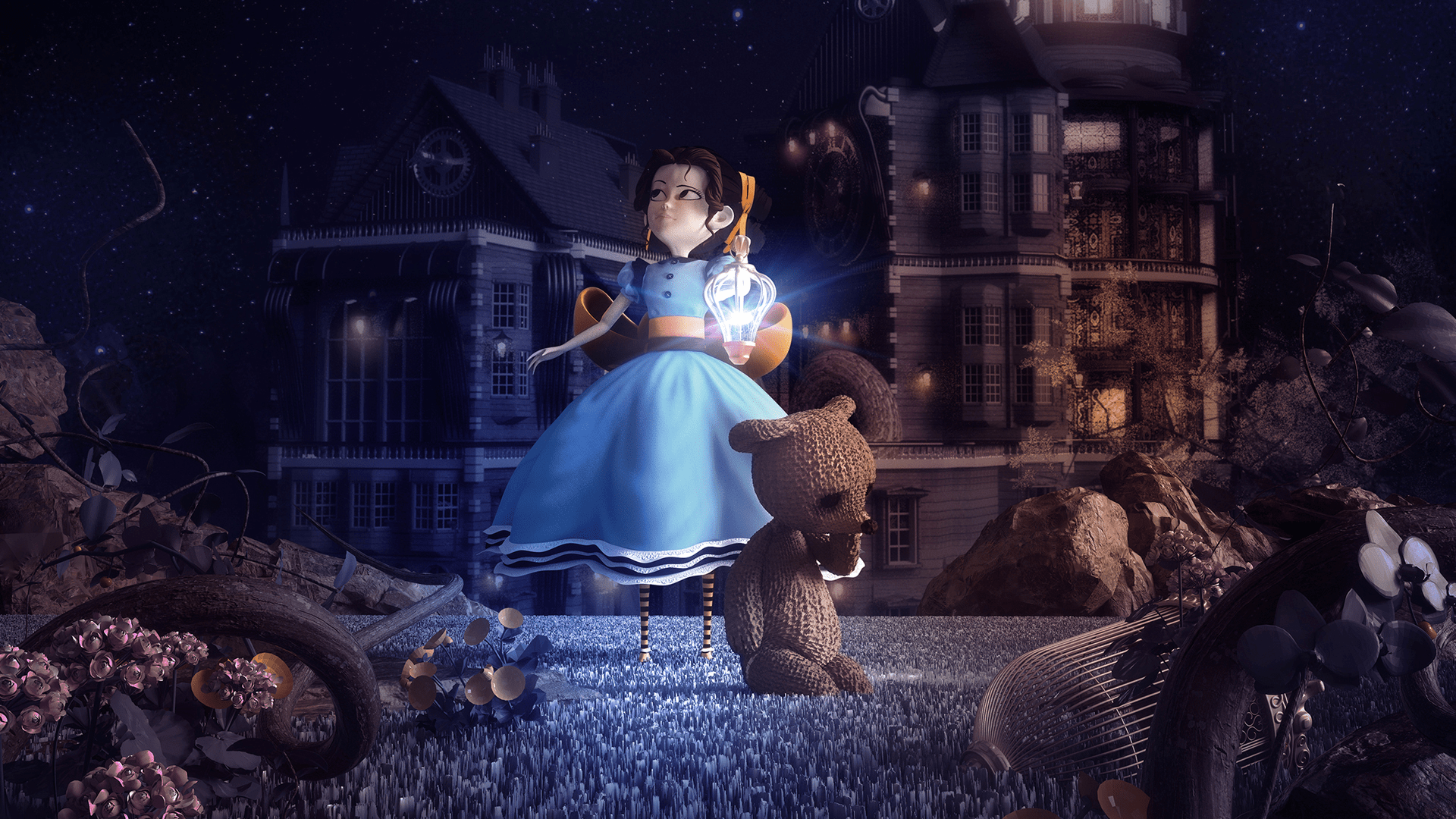 Combining top down exploration with complementing side-on platforming and thought provoking puzzles, Tandem: A Tale of Shadows is a stylish console debut for Monochrome Paris. The Finger Guns review.

Combining top down exploration with complementing side-on platforming and thought provoking puzzles, Tandem: A Tale of Shadows is a stylish but inconsistent console debut for Monochrome Paris. The Finger Guns review.

Developers Monochrome Paris state that their latest title Tandem: A Tale of Shadows is inspired by the works of Tim Burton, Jules Vernes and Conan Doyle. From the very second that the game begins and you’re treated to a colourful scene setting video, those inspirations are front and centre. Squint and you could be forgiven for mistaking the games protagonist Emma for Alice pre-Wonderland in Tim Burton’s 2010 adaptation, complete with floaty Victorian dress. Screenshots from some levels would be right at home on the cover of Twenty Thousand Leagues Under The Sea. The game begins with a whiff of the investigative styling and of Sir Arthur Conan Doyle. There’s no denying that Tandem: A Tale of Shadows is a visually charming game with plenty of style, but sometimes it focuses on that a little too much to a detriment of its puzzles…

In Tandem: A Tale of Shadows, you play as a character called Emma. The famous magician Thomas Kane has mysteriously disappeared and she’s on the case to uncover what happened. Teaming up with a magical teddy bear called Fenton, Emma ventures into the Kane Manor. Here the pair find a wild and enigmatic series of challenges that they’ll need to overcome from their respective perspectives – Emma walking on the ground and Fenton stuck to the walls.

Tandem isn’t just a name for this game. It’s an apt description of the game play too. The challenges that stand between them and the truth about Thomas Kane cannot be overcome alone. The aim of each of the games ~40 standard levels, set across 5 different themed areas, is to manoeuvre Fenton from his starting location to a crystal hidden beyond a series of puzzles. Buttons that Fenton can press from his horizontal position will open doors for Emma. Objects moved by Emma will create platforms that Fenton can use to move to new heights (or, widths I guess, seeing as though he’s technically horizontal to the rest of the world). It’s a fun blend of game play mechanics which takes traditional co-op dependency puzzles and puts an original spin on them by assigning them to different planes in the game world.

Where Tandem: A Tale of Shadows stands out from the competition is with its use of Chiaroscuro artistic techniques as a game play system. Lighting plays a large part in the puzzle solutions in this game because dark, shaded parts of the world cast by Emma become solid traversable platforms for Fenton. Similarly, areas of shade can become solid walls that Fenton can’t cross. Moving light sources, often carried by Emma but sometimes situated on draggable objects, to enable Fenton to get from solid ground to solid ground is at the core of this game.

For the most part, the puzzles of Tandem: A Tale of Shadows are well put together. They work on the dependencies of each character, putting self-enclosed room sized puzzles ahead of the pair with a clear objective. Need Emma to open the door to the next room? Well, Fenton needs to stand on a button but in order to get there, he’ll need to cross a large, hazard filled gap. With Emma, you’ll have to find a way to create a shadow bridge or move items in the environment to create a way forward. There are times when precise timing and fast paced platforming are involved. For example, in the third themed area, there’s a series of fiery obstacles standing between Emma and the path forward. On Fenton’s plane of existence, there are switches that look like gas oven dials and will switch off these fiery obstacles – but only for a short time.

Each of the themed areas of Tandem: A Tale of Shadows bring their own unique mechanic to the web of puzzles. These mechanics tie to the aesthetic of the area. For example, in the kitchen area you’ll find living gelatinous cubes that can eat through walls of cake or be combined into bigger blocks that will rise up as platforms for Fenton to cross. In the clockwork music room area, an army of mechanical tin soldiers patrol the area and will attack Emma if she’s spotted by watchful eyes that oversee the corridors. This gives each set of areas their own thematic feel and dictates how those chapters are paced. While the second zone, heavily inspired by nautical ships and pipework, makes great use of the shadow mechanic as a way to build bridges, the fourth zone is focused on using darkness as a way to stealthily avoid dangers.

The adverse effect of this is that the zones in Tandem: A Tale of Shadows feel out of order. The first 3 chapters steadily increase in difficulty and complexity. From here on out though, the last 2 chapters feel easy in comparison. Maybe the developers decided to front load their best content but by the time you reach then end of the 5th zone, the greenhouse area, the game feels like it has run out of original ideas. This is most aptly demonstrated by the boss encounters. Rather than a battle, these are unique puzzle levels that act as a culmination of all of the head scratchers you’ll have overcome in the chapter. The first 3 are off beat and fun. The fourth is repetitive and the final encounter is like a “best of” from the rest of the game which treads all of the same ground.

The same can be said about the narrative. At the start and end of each chapter, you’re treated to a cut scene which attempts to further the story line. It starts off strong, focusing on the mystery of Kane’s disappearance. Before the end though, that focus starts to wane. In the last 2 chapters, the only narrative beats you’ll find are secret rooms which unveil some of the secrets of the Kane manor. I don’t want to spoil it but the ending to Tandem: A Tale of Shadows is disappointing to say the least. This isn’t helped by the delivery via some sub-par voice acting.

There’s inconsistences in the amount of polish applied to Tandem: A Tale of Shadows too. You get a sense that a lot of attention to detail has been paid to building up the game world. There’s hundreds of little touches that make the Kane manor a quirky and interesting place to explore. Gargoyles that look down from the top of a wall, spreading their wings. Ghostly visages waltzing around a hallway to the pace of the levels music. Confetti and feathers fall from the ceiling at times, giving the world depth. It’s maddening then that when you finish a level and Fenton tosses a crystal to Emma, the girl’s face often gets a case of the Assassin’s Creed Unity invisible man syndrome. A moment of celebration is often followed by a furrowed brow as Emma’s face is reduced to a pair of floating eyes bobbing up and down beneath her hair. The camera angle can be just as irritating at times; cracks in walls often play a part in the puzzles of the game, leading to wall spaces that allow Emma to circumvent a potential danger. The camera angle often seems more intent on showing off the admittedly lovely visuals of the level than giving the player the best chance of spotting these cracked walls. I’ve stumbled into a few of these by mistake having come up against puzzles that initially looked impossible. One puzzle late on in level during the third area became impossible when a cake managed to get into an area it wasn’t supposed too. Respawning didn’t fix the issue so I had to restart the level. There’s a number of little things that give Tandem: A Tale of Shadows some unexpected rough edges.

That being said: You don’t often buy a puzzle game for the story and the rough edges can be forgiven when the core of the puzzles are as good as they are here.

As a package, Tandem: A Tale of Shadows is a game I’d recommend to puzzle game fans – with some caveats. The game world itself is brimming with character and intriguing little details. The puzzles that are housed within it are quite inventive, making smart use of top down exploration and a complimentary chiaroscuro inspired side scrolling platformer. It’s the story – which doesn’t fulfil its potential – and some rough edges that prevent this game from really challenging the genre’s best though.

Tandem: A Tale of Shadows launches on PS4 (review platform), Xbox One, PC and Nintendo Switch on October 21st, 2021.