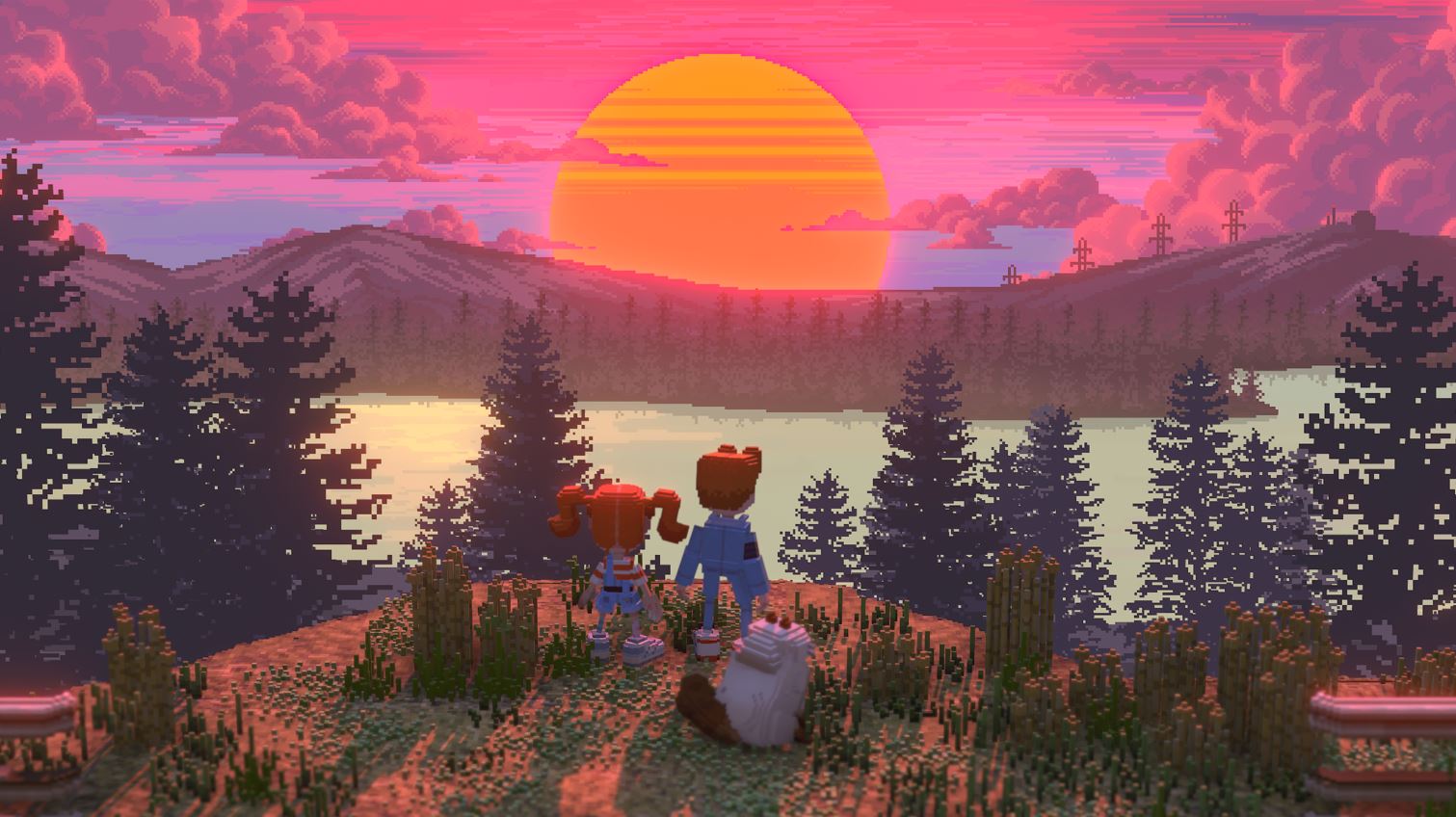 Visually stunning and featuring an engaging turn based battle system, Echo Generation is an aRPG that brings a flavour of the 1980's. For better and for worse. The Finger Guns Review.

Visually stunning and featuring an engaging turn based battle system, Echo Generation is an RPG that brings a flavour of the 1980’s. For better and for worse. The Finger Guns Review.

I don’t think that there’s any doubt that after Echo Generation, Cococucumber should be crowned the undisputed champions of voxel art video games. I thought that what they managed to do with Riverbond was impressive. Here, they’ve managed to find an entirely new level of detail that I’ve not seen reached anywhere else. It’s stunning. You can watch all of the trailers you want too but in action, on your TV, it looks brilliant and is probably a reason why you should go and download this game from Game Pass while you can. That being said, while Echo Generation is undeniably beautiful to look at, other aspects of the game are less appealing…

Echo Generation puts you in the trendy shoes of a player chosen (from a hand-full of pre-sets), sci-fi obsessed teenage character. It’s America in the 80’s and if movies have taught me anything about that time period, it’s that kids just roamed the streets, getting into all kinds of adventures. That’s the initial premise for this game; Your mum wants you and your little sister out of the house. Never mind the fact that there’s a serial killer on the loose, that aliens have crash landed in the corn fields nearby or that the school is haunted. Ol’ mother dearest is fed up of cartoons being on the TV so it’s time to head out, get into trouble around the quirky town and hopefully finish filming a sci-fi flick the protagonist and their friends have been making.

The main story line to Echo Generation is one that’s hard to keep tabs on. There’s such a plethora of weird and creepy things happening in and around Maple Town that it’s often difficult to feel out what’s important to the narrative and what’s there for flavour or as a side quest. Whether it’s a giant clown that’s apparently murdered the owner of a repair shop, a pet cemetery complete with skeletal cats or a giant scrap metal monstrosity, the young protagonists bounce from unearthly occurrences to mystifying enemies without much explanation. The strongest narrative thread that runs through the whole game only really comes to fruition towards the end of the game. Until then, it feels like a trail of breadcrumbs in a field full of hungry birds. To be frank, the storyline to Echo Generation feels all over the place on occasion, as it is has been written and re-written a few times during development.

Because of this, the rest of the game feels unfocused. There’s no quest tracker or log in Echo Generation. Instead, it’s up to the player to remember what it is they’re supposed to be doing. That’s far trickier than it sounds because you’re not funnelled to places of importance and sometimes you’ll spend time exploring a location or hunting for an object that has absolutely nothing to do with what your aims are at the time. For the most part, progress in this game flows a little something like this: Click on X obstacle, trigger messages that says “I’ll need Y to pass here”. Explore until you find Y, click on Y to get message from character that you’ll need to trade Z object for Y. Grind out experience so you can defeat boss A to get Z, give Z to get Y, use Y on X, walk into new obstacle. Repeat. Sigh. It’s even possible to collect quest objects before they’re required too. This meant that my first interaction with some characters was “Hey! Here’s that thing you wanted”, which they’d not even asked me for yet. While this certainly gives Echo Generation a sense of adventure and freedom, it doesn’t make for a fluid and satisfying experience.

While you’re exploring and heading back and forth through the voxel world, you’ll bump into a reasonably large variety of hostile beings. Some of these are scripted battles while others will be random encounters. Combat in Echo Generation takes place via a traditional turn based system but with the addition of an interesting active ingredient. You can select any of the attacks each character has unlocked (although special abilities have a limited number of uses per fight) when it’s their turn and no matter which ability you choose, a unique mini-game/QTE will appear. The amount of damage you do with the attack will depend on how well you perform in this little game. Nail it and you’ll land a critical attack. Fail and you’ll still dish out some damage but much less than you could otherwise. For standard attacks, all you have to do is press the A button when a symbol appears on screen. The better an attack is, the more complex the mini-game/QTE becomes. In one, you’ve got to guess which of 3 basketball baskets a star is going to drop into as it passes across the screen. In another, you’ve got to alternate between pressing A and B rapidly to fill up a gauge.

The same system exist for defence in combat too. Whenever a foe attempts to attack your group, a shield icon appears on screen. Tap the A button as the icon fills with blue and you’ll shrug off some of the damage dealt or even block the attack entirely.

While this isn’t an entirely original system (I think it first appeared in 1999’s Shadow Hearts), it’s well implemented here. It keeps combat fresh and challenging against a varied gallery of interesting enemies. There’s only one issue with the combat – sometimes, the QTE/mini-game doesn’t give you the chance. I’m not sure if this is a bug or an intended feature, like a random shift in difficulty, but sometimes the icon to indicate when to press A appears for just a fraction of second. This usually occurs on the bigger enemies, as if the animation to get into place to attack eats into the response time to attack successfully.

As you vanquish the aliens, trash monsters and other sci-fi foes, your team of teenagers will gain experience. This eventually equates to levelling up in typical RPG fashion. With each new level, you can choose whether to increase the heath, attack power or ability points (which allows you to use more special abilities per fight) of a character. It’s a relatively simple RPG-lite system used here. There’s not a massive amount of numbers to worry about and you won’t be levelling up hundreds of times.

While Echo Generations’ levelling and RPG system is accessible and works well for the 2 main characters, it falls to pieces for the unlockable third party members. These are “pet” characters that can join you at certain parts in the game after you’ve fulfilled certain criteria. The issue with this is that they join you as a Level 1 character, regardless of what level the protagonist and their sister is. The first “pet” character joined my own adventure when I’d already reached level 6. Because the enemies you face get progressively more difficult as the game goes on, this meant that if I wanted this character to be useful, I had to grind out at least a few levels. When your world is as gorgeous as it is in this game, spending time in static turn based fights just to level up feels like wasted time.

While you might think that I’ve disliked my time with Echo Generation given the number of issues I’ve listed so far, I came away from this game having had a reasonably good time, despite its flaws. There’s a real charm to this game that manages to strike a unique tone between old school RPG’s like EarthBound and a odd, irreverent takes on mature themes. The world that has been built for this game is one that’s constantly exciting to explore with a lot of colourful characters to talk too – when they’re not just blurting out a shopping list of things you need to bring them. I’ve scoffed out loud a few times playing this game because some of the dialogue is quite hilarious. What’s more, Echo Generation manages to get an 80’s like vibe across to the player without having to shoe horn in a mountain of relevant pop culture references. It contains its own fictional film properties and great synth music and it’s all the better for it.

Does the quality of script, tone and fun vibe of Echo Generation overcome its number of issues? No. Not quite. But there’s still a worthwhile adventure to be had here if you can forgive the game’s foibles.

It’s beautiful to look at and has an engaging turn based combat system but Echo Generation has a few core issues that undermine its best qualities. An unfocused narrative leads to confused and unclear quest lines which, combined with some curious design choices, means the game doesn’t manage to fulfil its obvious potential.