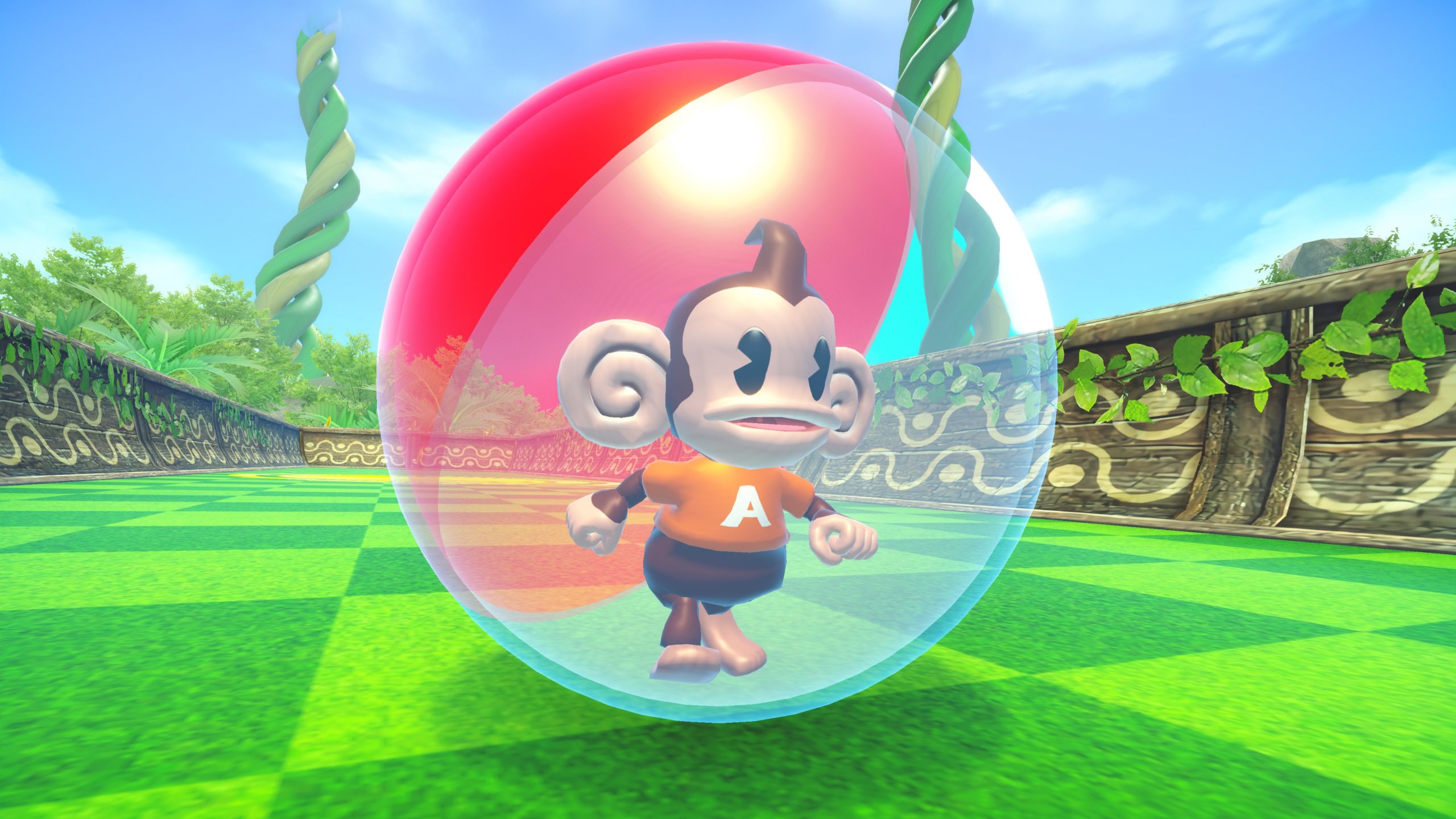 Super Monkey Ball returns in Banana Mania, and it's just as entertaining and infuriating as it ever was. The Finger Guns Review.

Super Monkey Ball returns in Banana Mania, and it’s just as entertaining and infuriating as it ever was. The Finger Guns Review.

Super Monkey Ball is a game I remember spending nights upon nights with my friends playing, huddled around a Gamecube, nudging each other so they’ll fall off thin balance beams or miss their targets in the incredible party games. It’s a series I have fond memories of, and the latest in the series, Banana Mania is a fitting tribute to those nights when all that mattered was Super Monkey Ball.

The first lesson of Super Monkey Ball came shrieking back at me when I began Banana Mania. Above anything else, you’re not controlling the ‘Monkey Ball’, but the level itself. It’s up to you to guide AiAi and friends to the Goal without falling off. It’s a bright and breezy series with little room for cynical eyes, but that lesson is always worth remembering when you’re in a jam. The ball will only move when you dictate the level to do as such. Ergo, it’s always very much your fault when things go horribly wrong, as they often do.

A remaster of the original trilogy, Banana Mania adds a lick of paint to those classic levels, bursting with colour and vibrancy throughout. It’s easy to get caught up in nostalgia and in that regard, naturally Banana Mania delivers in spades. It’s a celebration of SEGA as much as it is its own game and it thoroughly leans into it this time around.

So if you’re at all into the lore of Super Monkey Ball, you’ll feel right at home here. The early stages are easy enough to power through. Whilst they’re never easy – pace, speed and timing are all crucial to navigate your way to victory – once you get past the more tutorial-like levels, the difficulty balance never goes so off the rails it becomes impossible. There’s enough of a curve that you feel like you’re learning the more you play and the further you progress.

That is of course, until you reach a level so utterly infuriating it makes you want to throw your console at someone. When out of nowhere a course pops up that feels close to impossible, Banana Mania becomes a chore. That’s not something I ever really expected to say about Super Monkey Ball. It’s never been the easiest of games and certainly if you want to complete the game it’s a fiendish uphill battle to do so, but if nothing else this is a reminder that you really need all of your faculties working very hard, harder than you were probably expecting when you switch on this game about rolling monkeys down a titling course, I suspect.

If you’re finding it all a little too tricky then fortunately there’s a mode you can switch on which will double the time given to complete the course and offer an optimal route through the course. You can turn this on and off at your leisure and whilst it certainly offers a substantial hand to hold, there’s no guarantee you’ll finish the level even with the help mode on, so it’s still up to you, they ‘help’ can just guide you along the way. And the slow motion is next to useless but that could just be me. There are certain courses I found it to be a hindrance, but I see where it could be beneficial for younger players, perhaps.

If you’re ready to throw hands with a tiny monkey because you can’t get past a course though, you can move on without completing it. This will cost you some in-game currency though which you use to buy new characters, special items and even the ‘Jump’ mechanic (30,000 bananas?!). It’s probably cheaper than buying a new TV, so take it into consideration.

Relishing in the deceptive challenge of Super Monkey Ball is what it’s all about though, and you’ll get more than enough of a punishment if you’re willing to see it through. The balancing act of controlling the level itself whilst keeping an eye on the sodding ball certainly brings up its own set of challenges, and this is without the, I’m gonna say it, nonsense that is a few of the later courses. The tough ones come thick and fast and you’ve gotta be a true zen master to power through them without throwing the kind of tantrum that could level a city block.

There’s plenty of SEGA love here and if you’re a bumbling old schooler like me you’ll get plenty of joy unlocking classic characters such as Sonic and Tails, Beat from Jet Set Radio and a far too cute version of Kazuma Kiryu from Yakuza. You can also unlock classic SEGA consoles including the Saturn and the Dreamcast because of course you can. Selecting a certain character will change up your collectible each game also. For example, if you play as Sonic or Tails you’ll be collecting rings instead of bananas. Playing as Beat? You’ll be stacking up on graffiti cans. It’s cool little touches like this that make you grin like an idiot whilst you’re seeing the words ‘Fall Out’ appear on your screen for the millionth time.

I began to wonder if it was why me and my friends gravitated to the party games back in the day and avoided the ‘story’, because there’s an element of making your own fun in these levels. They’re all present and correct here, which is brilliant to see and are for my money the most essential part of any Super Monkey Ball title. I’m a huge fan of the iconic Monkey Target in particular, which sees you tear it down a ramp and open the ball up like wings for your chosen monkey to hit a target out to sea. It’s not easy, and the first few attempts will make you want to scream but once you get your noggin’ around how you’re supposed to glide your monkey to its intended target, you’ll have a blast.

Monkey Golf is also a blast, which sees your characters play crazy golf whilst inside the ball itself in the hopes of reaching the hole. I mean, it’s golf but Super Monkey style and it’s a lot of fun. The party games range from billiards to football to even in-air dog fighting. I can’t imagine you’ll ever get bored with them and there’s always something to play if you have a group of friends around. Though Monkey Target should always be first priority. Hell, I requested to review this one just so I could try it out. It didn’t disappoint.

It’s the Party Games where Super Monkey Ball: Banana Mania really comes to life and to that end, it makes this shiny remaster well worth the admission fee. Whilst your brain will be turned to mush by the main story courses, offering up a genuine challenge, the joy of Super Monkey Ball has always been in its multiplayer offerings and the selection really brings the whole package to life.

Celebrating the series 20th anniversary, Super Monkey Ball: Banana Mania is a hugely challenging trip through the greatest hits of the series, showing off classic courses rendered beautifully for the new systems. The Party Games remains the jewel in the Monkey Ball crown, but there’s more than enough to get your brain working whilst you’re balancing out a monkey in a ball on perilously thin ledges. It’s good to have Monkey Ball back.