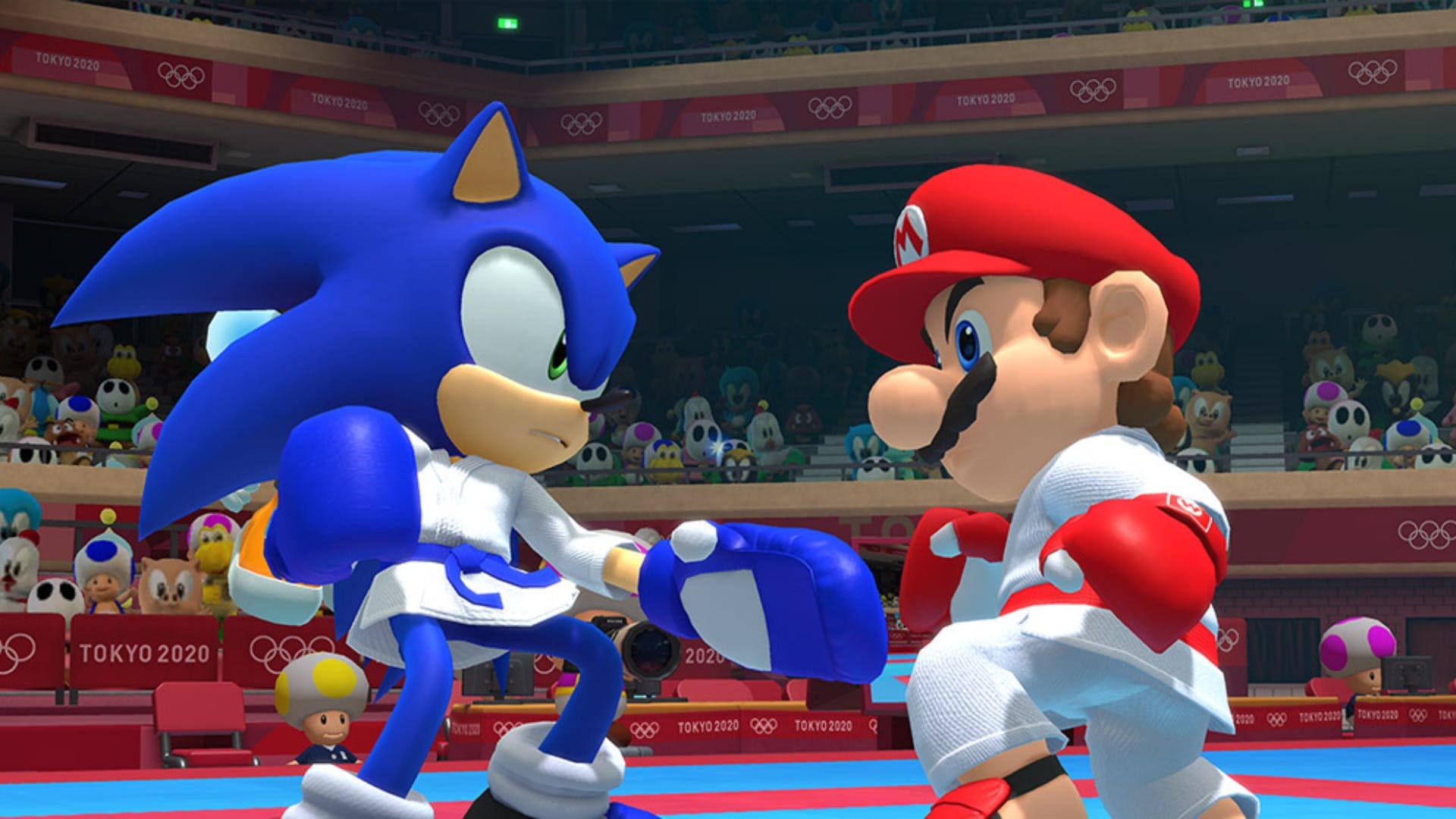 Mario and Sonic return to the Olympics in perhaps the most complete edition of the game thus far. The Finger Guns Review

Mario and Sonic return to the Olympics in perhaps the most complete edition of the game thus far. The Finger Guns Review.

It still blows my mind that Mario and Sonic are in video games together. Of course, this is showing my age somewhat. I didn’t grow up in a time where all I’ve ever known are these strange crossovers between gamings two biggest mascots. I remember the times before it, the dark ages when Mario and Sonic were kept apart by the pride of their respective owners. Left to play on either side of the playground with their weird looking mates.

Nowadays, SEGA and Nintendo joining together to take on the world of Olympic video games is still a strange thing to get my head around. Why the Olympic games? Three massive licenses merged together for what purpose? Wouldn’t Sonic just absolutely annihilate everyone on the field events? Apparently not.

Welcome to the Mario and Sonic Olympics. This world still doesn’t make much sense but what the hell, it’s a good laugh init?

The series has of course continued to go from strength to strength across Nintendo’s various platforms – they still star Mario, after all. Don’t expect to see them anywhere else – in summer and winter Olympics incarnations, and now it’s back once again with Mario and Sonic at the Olympic Games Tokyo 2020 and it’s as close as the kid inside me has ever been to securing that fabled platformer.

Let’s kick off with the Story Mode, as it may not quite be what you expect. There’s trouble afoot when the dastardly duo of Bowser and Dr. Eggman (Robotnik, for those as old as I am) trap Mario, Sonic and Toad inside a classic computer game system, along with themselves. Transporting back to the Tokyo Olympics in 1964, It’s up to our heroes to win gold in every Olympic event in order to escape and return back to the present day Games.

It’s certainly a fun premise, and there’s a real joy to be had seeing the classic Sonic and Mario universe sprites interacting with each other (Mario from his 8-bit days, Sonic from 16-bit). Though there’s little more to do than wait for talking head cutscenes to finish between events, the story plays out with pretty much every character in the game playing a critical role, as you explore modern day Tokyo looking for various Nintendo and Sega mascots to rescue their leaders. I haven’t quite gotten over the odd moment where you’re controlling a Nintendo character and a SEGA character is just following you around and vice versa. Again, that’s probably the old soul in me. You darn kids don’t know how good you’ve got it.

The biggest draw of the Story Mode is those ‘Tokyo 1964’ events. Being able to compete with the classic sprites is an absolute pleasure, and with a variety of events on offer you’re tasked with beating either Bowser or Eggman in 100m, hurdles, rowing and more. There’s even a cracking little sequence where, as Sonic, you have to beat Tokyo’s infamous bullet train that Eggman is escaping on in a race. Fortunately there’s a ‘Games Room’ where you can replay these fun minigames that occur during the Story Mode.

Sequences such as this, along with all of the ‘Classic’ modes really, are what bring a fresh lick of paint to the Mario and Sonic Olympics franchise. If you’re a fan of the nostalgia hit – which, who isn’t these days? – you’re going to fall under its spell almost immediately. More than anything it reminds me of playing Olympic games on my Mega Drive. Whilst the button mashing mechanics are fairly commonplace in the M+S franchise, to get a 16-bit sprite running as fast as they can puts you firmly back in the mindset of playing the likes of Olympic Gold, furiously mashing buttons to get your characters over hurdles and into first place.

The fact your sprite characters this time around just happen to be Mario, Sonic, Tails, Knuckles, Bowser, Eggman and more is the icing on the cake. The events aren’t particularly long (save for the Marathon, which is about as difficult as those old-school Olympic games were) but provide just enough of a ‘one-more-go’ appeal to keep you entertained for a long while. I’d like to applaud whoever at SEGA decided to throw in ‘Tokyo 1964’, it’s the most fun I’ve had with the franchise for a long time.

Elsewhere the standard Olympic events are available to play whenever you like, in either single or multiplayer modes. You’re able to mix and match the control options, whether you’re playing in handheld or docked. Motion controls are included (but thankfully not mandatory) along with Pro Controller support and standard buttons. Multiplayer and local play between up to four Switches is also included, though I haven’t been able to test this out quite yet. The selection of events on offer is pretty staggering, from Swimming to Skateboarding (yes, now an official Olympic sport from 2020), discus, table tennis and Equestrian, still brilliantly funny when you’re playing as Eggman or Bowser.

A particular favourite of mine is Rugby Sevens, which, considering I know nothing about the sport in real life, is quite the compliment. It’s an absolute riot to play a quick-fire game of Rugby with Mario and Sonic universe characters putting a giant smile on my face throughout. If there was any event I’d like to see break out and become a standalone game, it’s this one.

There’s also three Dream Events in the 2020 Mode, which comprise of Dream Racing, Dream Karate and Dream Shooting, by far the most fun event offered in the game. As you buddy up with either a friend or an AI teammate – you can play solo too, if you wish – you explore a 3D environment looking for targets to shoot, along with your opposing team. As the event continues bonus targets will begin to appear in the sky. The team who shoots the most targets wins the event. In handheld the gyro is used to full effect as you aim for the targets and it’s enormously satisfying, particularly as you are finally able to shoot Daisy in the face, an aspect of Mario 2020 that never really gets old.

That strange sensation of using a gun against our favourite SEGA and Nintendo characters is a weird one, but oddly satisfying. There’s plenty to love in the Dream modes, particularly Dream Karate, where you’re fighting on a panel board and your goal is to light up as many individual panels as you can.

It doesn’t come close to Dream Shooting though, and is probably the most fun I’ve had on the Switch this year in terms of multiplayer gaming. Much like most events in the game it’s fast and over all too soon, but damn does it put a smile on your face.

The 1964 Events can also be played whenever you like, though they’re more limited in choice, with ten to play. The 10m Diving Platform Event is particularly good, tasking you with quick QTE button sequences to ensure a perfect dive. Again, very funny with the classic Eggman sprite. Who knew he had the capacity to be so very elegant?

Mario and Sonic at the Olympic Games: Tokyo 2020 isn’t a groundbreaking revolution one may have hoped for or one may have expected for the Switch edition but there’s more than enough here that it does well rather than retreading the same formula. The series has moved into a new direction with the addition of a delightful Story Mode and the ‘Tokyo 1964’ mode is an inspired addition, which will warm the heart of any stone cold adult just looking to relive his youth once again.

Mario and Sonic At The Olympic Games: Tokyo 2020 is available on November 8th on Nintendo Switch.